Goals from Roberto Pereyra and José Holebas made it three Premier League wins in a row for just the second time in Watford's history, easing past Crystal Palace 2-1 to maintain their 100 per cent start to the season.

It was the Eagles who began the better of the two sides at Vicarage Road and two fine stops from Ben Foster kept the scores level. But Watford took the lead eight minutes into the second half when Pereyra fired low into the far corner.

And Javi Gracia's side wrapped up the points with a fortuitous goal 18 minutes from time. Left-back Holebas was the beneficiary, cutting inside onto his right foot and curling a cross over the helpless Wayne Hennessey at the back post.

A late strike from Wilfried Zaha ensured a nervy finish but Watford held out to record their first win over the Eagles in five attempts.

Non-Watford or Palace fans might not realise it, but there is a rivalry between the two clubs which stems from the 2012/13 season when the Eagles beat the Hornets to promotion in the Championship Playoff Final at Wembley.

Things have continued to build since then with Zaha often the villain of the piece from a Watford perspective while, almost without exception, enjoying a decisive role in every meeting between the two sides.

Palace had the better of the opening exchanges and only two excellent stops from Foster – denying Christian Benteke and James McArthur – kept the scores level. Watford grew into the game and took their chances when they came in the second half.

Zaha's strike 12 minutes from time allowed the Eagles back into the tie and shows there is still work to be done. While it's too early to draw sweeping conclusions, the Hornets look to have benefited from a full pre-season under Gracia.

The Spaniard was jetted in to replace Marco Silva in January and could only steady the ship in the remaining months of the season. There were even some calling for the former Espanyol boss to be removed with a miserable away record (not scoring on the road since January 2) a big factor.

But the Hornets look sharper, fitter, more organised and more dangerous with the ball in the early weeks of the season with Troy Deeney and Andre Gray to the fore.

Burnley will be the gold standard and Watford must believe they can do something similar after such a strong start. 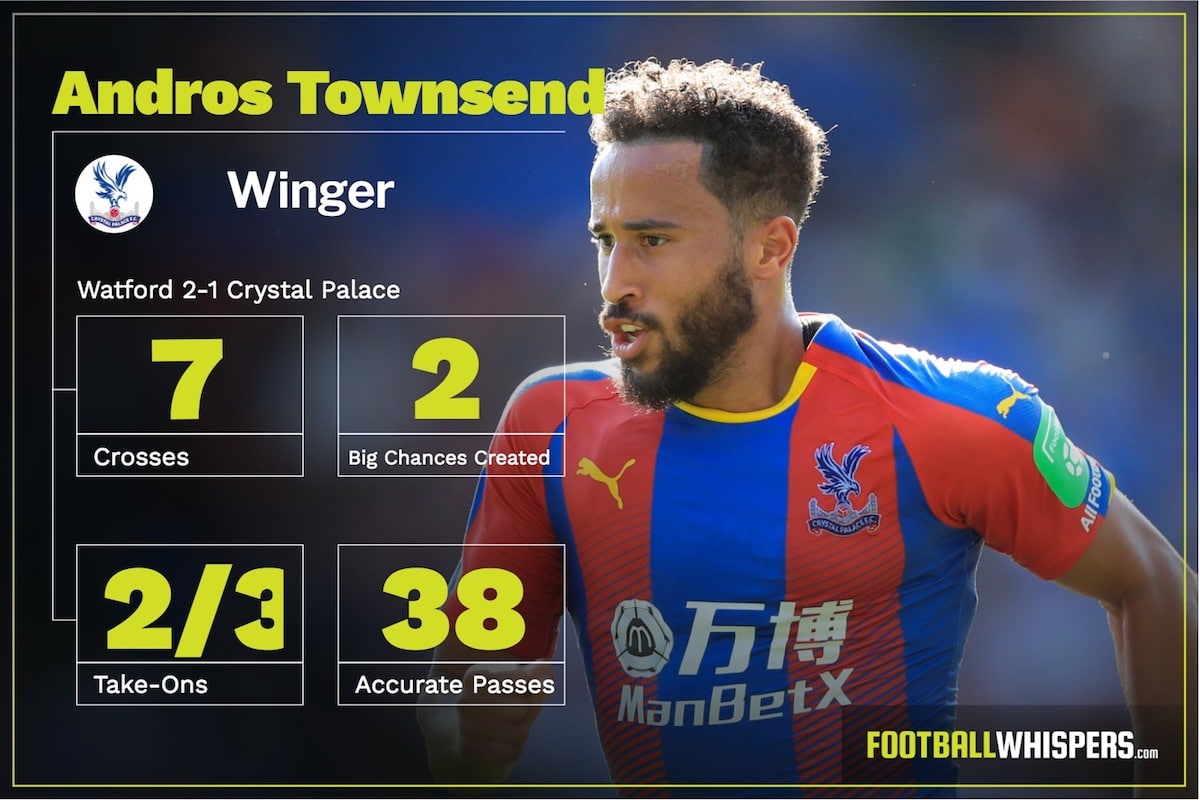 Zaha took many of the plaudits for Palace's revival under Roy Hodgson last season and rightly so. With Benteke injured, the Eagles' talismanic winger was paired up front with Townsend to great effect and has remained there this season.

Townsend, meanwhile, has returned to his natural position out wide and is still flourishing. But while Zaha remains at Selhurst Park the England international does not get the recognition he deserves.

The former Newcastle United and Tottenham Hotspur wideman was the visitors' most dangerous player in the first half at Vicarage Road, completing seven of ten passes in the attacking third, supplying three crosses and creating two chances for his team-mates.

Naturally left-footed despite being stationed on the right, Townsend's pin-point crossing twice caused Watford problems in the opening period. Benteke was the intended recipient on both occasions, nodding one effort wide before bringing a fine save out of Foster from the second.

If Palace build on last season's 11th-place finish Zaha will doubtless dominate the headlines. But Townsend is the power behind the throne at Selhurst Park and deserves more credit. 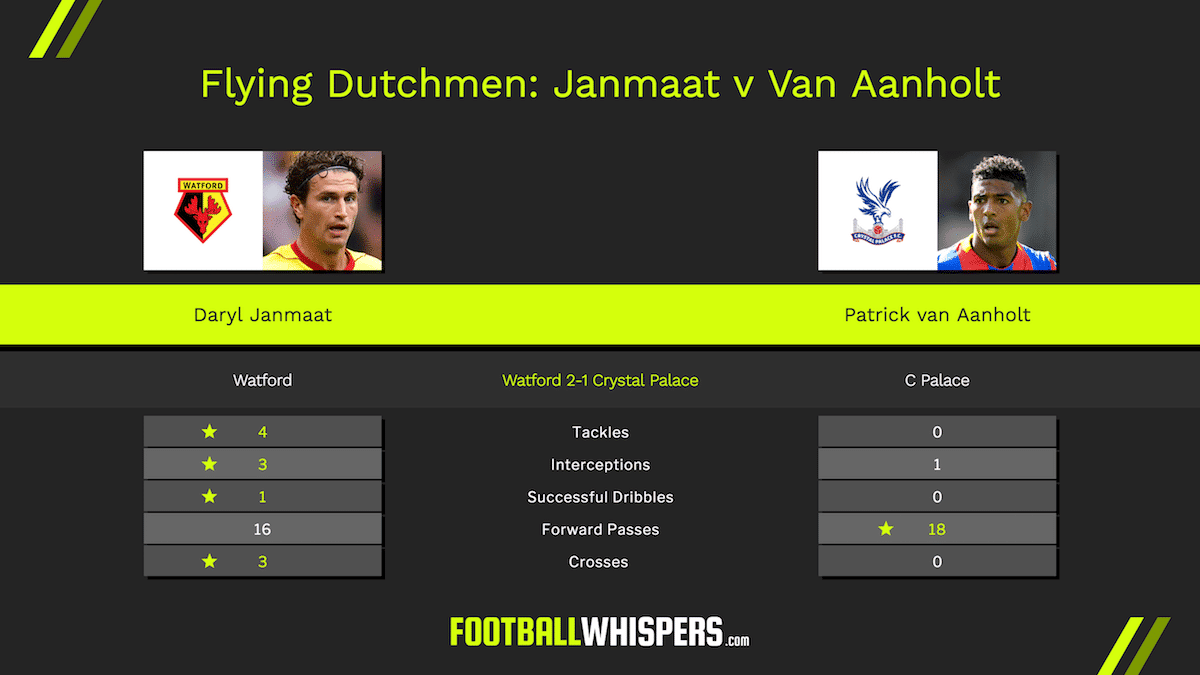 Early last season it looked as though new signing Kiko Femenía would make the right-back spot his own at Watford.

But a combination of injury and a change of coach – both to be expected in WD18 – saw Janmaat finish the campaign as first-choice right-back with his stunning solo goal in the thrashing of Chelsea named Goal of the Season.

And the Dutch international has gone from strength-to-strength in the early weeks of this season – which is significant as the Hornets brought in competition for his place in Marc Navarro. The former Espanyol defender is yet to even make the matchday 18 and, on this evidence, will continue to struggle.

In Watford's wingless wonders 4-2-2-2 system the emphasis is on the full-backs to provide the width and Janmaat did just that, giving Patrick van Aanholt a difficult afternoon and, crucially, preventing his countryman from making too many forward forays of his own. 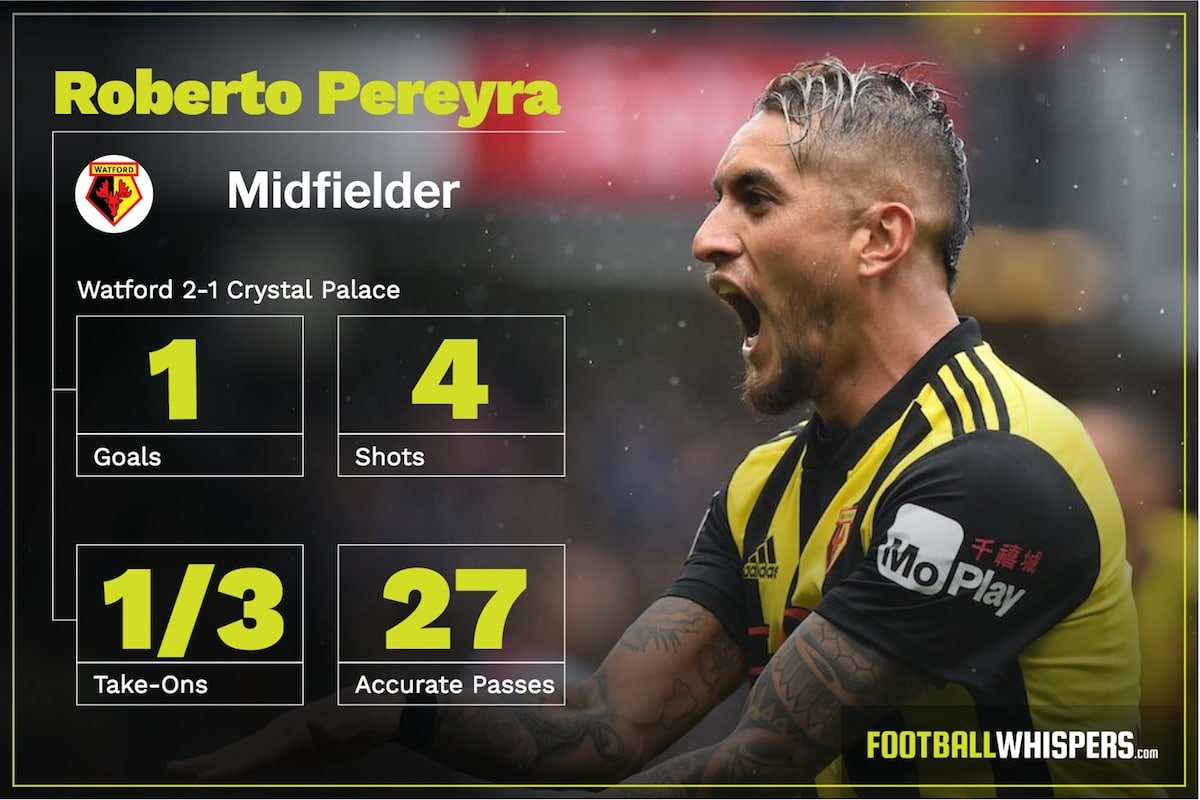 Nothing demonstrates the wealth of the Premier League like mid-table Watford spending €13million to sign an Argentine international from a club of Juventus' ilk. But in the summer of 2016 that is exactly what the Hornets did to capture Pereyra.

The two-time Serie A winner was just hitting his stride when knee ligament damage suffered at Manchester City in December 2016 ended his maiden campaign at Vicarage Road prematurely.

Pereyra returned for the start of last season but there were times when it appeared the 27-year-old did not fully trust his body. His performances lacked for something and he was a shadow of the player who had impressed in his first half-season in England.

But Gracia's January arrival reinvigorated Pereyra. Moving forward to play in a more advanced he finished the 2017/18 campaign with a virtuoso display in the 2-1 home win over Newcastle, form he carried into the new term by scoring an opening-day brace in the win over Brighton & Hove Albion – the first an outrageous volley from a short corner.

And before scoring the opener against Palace Pereyra had Watford's two best chances, seeing a volley blocked at the back post before curling straight down the throat of Wayne Hennessey.

Pereyra was wanted by his former boss, Walter Mazzarri, at Torino this summer. Watford's decision to hold onto him is looking better by the week.

When does Hodgson give up on Benteke?

Before kick-off Palace boss Hodgson was asked if his misfiring striker just needed the clichéd “one to go in off the backside” to rediscover the goal-scoring touch.

The former England boss agreed and saw the hulking Belgian forward pass up two excellent chances to end a run which has seen him score just three times since the beginning of last season.

With Zaha and Townsend wreaking havoc as an unlikely pairing last season and young Norwegian Alexander Sørloth on the books to offer a more physical outlet, one wonders how long under Hodgson's patience runs out.

Last season Benteke's seasonal xG was 10.4, the 13th-best among Premier League forwards. Yet he managed a paltry three goals, one of which was a pity penalty in the 5-0 trouncing of ten-man Leicester City in April.

That is a dismal under-performance and, at some point, Palace will have to cut their losses on a player who looks a shadow of the one which hit double figures in three consecutive seasons for Aston Villa.