Manchester United came from two down to secure a 2-2 draw at Southampton but, once again, there were more questions than answers for embattled coach José Mourinho.

The Saints, rooted in the Premier League's bottom three, raced into a two-goal lead.

But then, out of nowhere, United woke up. Watford.

Six minutes later United were level. Marcus Rashford made progress down the right before cutting back a low cross for Ander Herrera who flicked past Alex McCarthy at the near post with a clever flick.

The way the Spaniard tore back to halfway suggested United mean business. But the expected onslaught never came and the game finished 2-2.

Here are five things we learned from St. Mary's.

Back by popular demand – at least among neutrals – Manchester United's centre-back lottery returned for the trip to the South Coast with Mourinho pitching not one but two midfielders into his backline in Scott McTominay and Nemanja Matić.

Both have done it before, McTominay in the 3-1 defeat at West Ham United at the end of September – incidentally his penultimate outing before being placed in the deep freeze – and Matić in the latter stages of Tuesday's desperate Champions League win over Young Boys

Crowbarring two players into a makeshift backline was asking for trouble. It was not a huge surprise, therefore, when Matić – who has been off the pace, at best, this season – was left red-faced following his part in Southampton's opener.

Speaking beforehand, Mourinho explained why the Serb would be filling in at centre-half, reeling off a list of absentees which included Eric Bailly, Chris Smalling and Victor Lindelöf while Marcos Rojo, he explained, was only fit enough for the bench.

"I would like to have Nemanja Vidić but no Vidić, only Nemanja Matić…"

One can't help but feel, though, that it all rather suits the Mourinho narrative. The Portuguese has not been shy about reminding us he wanted a centre-half – any centre-half would have done for poor José – in the summer.

Harry Maguire, Yerry Mina, Diego Godín and plenty of others whose names have since been forgotten were all reported to be Manchester United transfer targets at one time or another. But none arrived at Old Trafford and Mourinho has not stopped sulking since.

On one hand he has a point. But independent of that, electing to start with three central ‘defenders' away to a side with one Premier League win and just ten goals is either desperate or misguided. Perhaps both.

It's become a recurring theme for the Red Devils this season: their build-up play is far too slow and it was evident in the visitors' top pass combinations at the end of the game which were primarily between the members of that mix-and-match defensive line:

It's a problem which has plagued United for a while now and was every bit as evident against a limited Young Boys side in the Champions League in the week.

All too often Mourinho's side have possession for possession's sake. While their average possession duration of 11.46 seconds puts them in a healthy sixth place in the Premier League, they lack purpose, invention and guile and that was the case, again, at Southampton. 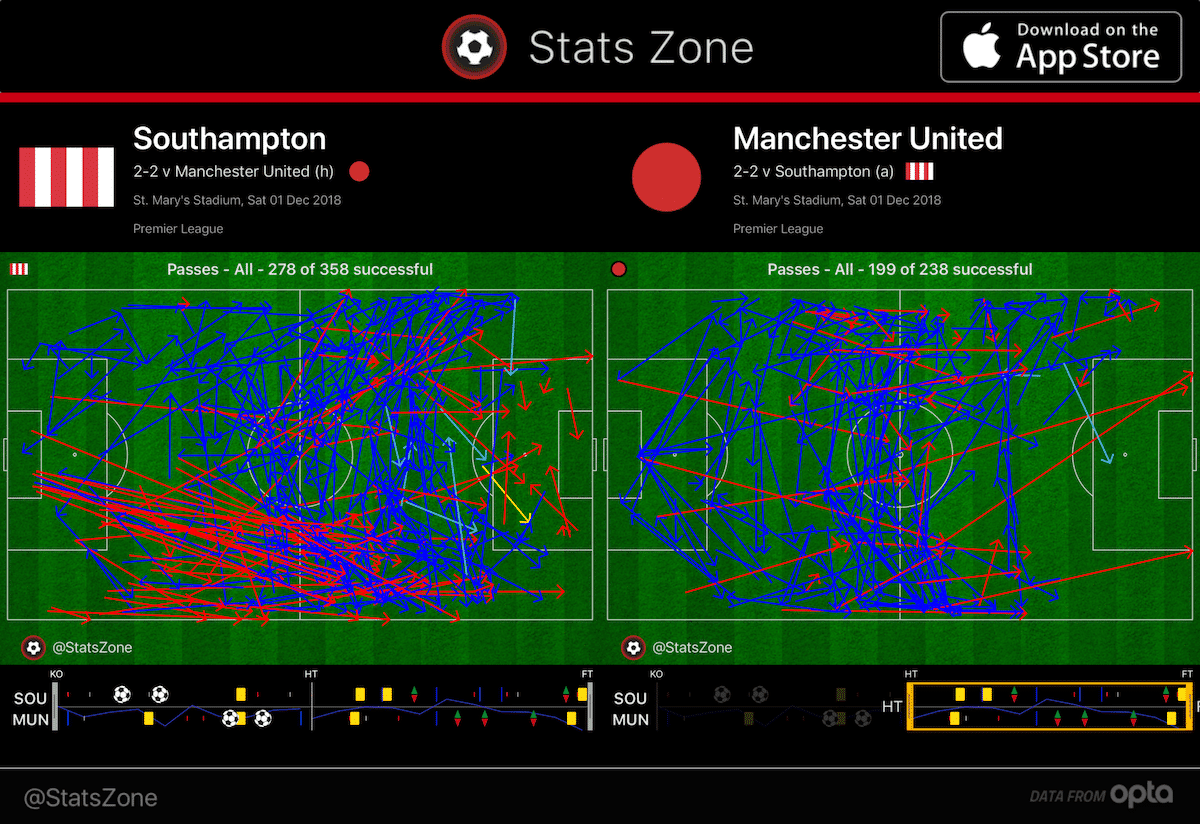 That was put into even sharper focus by the fact they managed just a single shot in the second half. Of the 199 passes they completed after half time, only one took them into the penalty area (shown above, courtesy of the Stats Zone app).

Pogba at his infuriating worst…again

Spotting a theme here? The tone for Paul Pogba's display on the South Coast was set after just 12 minutes when the midfielder somehow brought down a loose ball while losing his footing before instantly losing possession carelessly.

Time and time again the flamboyant Frenchman wanted too long on the ball, surrendering possession cheaply. The fact he finished behind Matić (67), McTominay (56), Herrera (56) and Phil Jones (47) for completed passes spoke volumes for his lack of care when on the ball as much as United's lack of thrust or penetration. 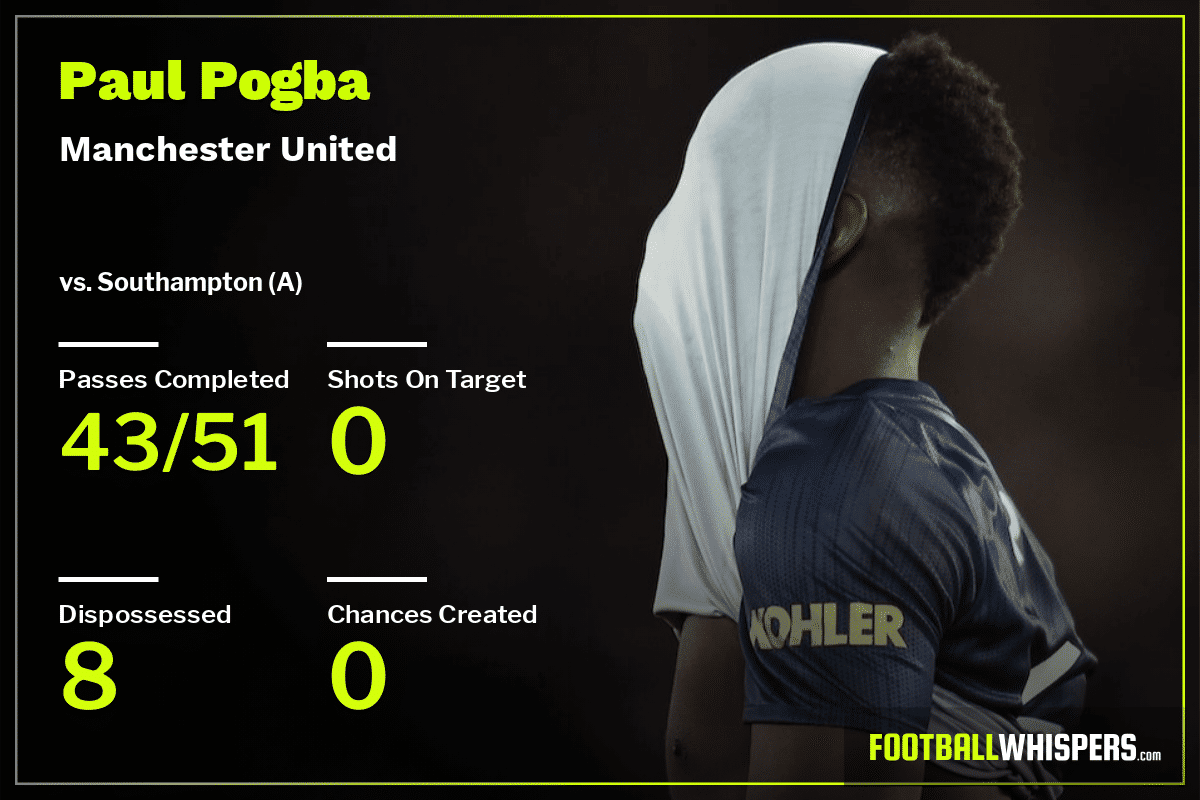 There is a lot to be said for doing the simple things well but the sense one gets from the World Cup winner is that is not enough. If that is the case then the former Juventus man needs someone close to him to point out the identity of the man he calls ‘boss'.

Mourinho values reliability, simplicity and solidity above all else. He'd rather a player who hit 7/10 every week than one who peaked at 10/10 on a handful of occasions. On the evidence of this season Pogba is neither and that is a huge problem for player, club and coach.

Rashford the only bright spot for United

After a sluggish start the England international grew into the game and was the visitors' brightest spark at St. Mary's.

It was Rashford who supplied the pass for Lukaku to spring free of the Saints' backline and finish and it was United's No.10 who provided the assist for Herrera to level, darting down the right before cutting back for the Spaniard to tuck home. 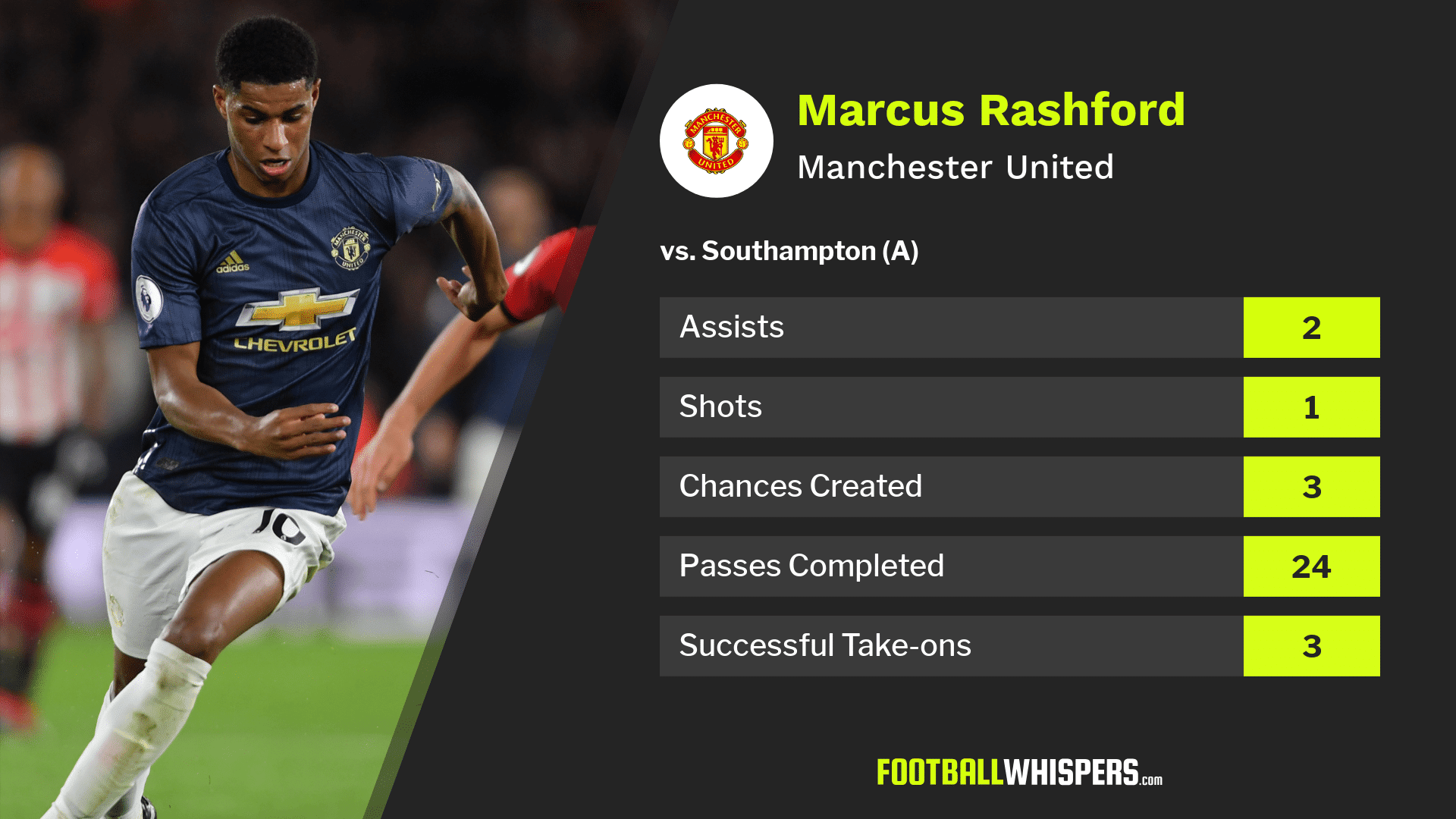 He created more chances (3) than anyone else, completed seven of ten passes in the attacking third, three of four take-ons and even recovered possession twice for United.

It might be a cynical move but at a time when he is coming under more scrutiny than ever, Mourinho would do well to protect and progress the cause of the Wythenshawe native. There is nothing football fans like more than seeing one of their own thriving.

Signs of life for the Saints

There was another team in this game. Southampton were quick out the blocks and took advantage of United's slow start to race into a two-goal lead which they richly deserved.

At the centre of everything good about the hosts was forward Nathan Redmond and strike partner Michael Obafemi.

The pair caused United problems throughout with Obafemi's involvement only ending when he suffered a knock. The teenager was making his first Premier League start but played with more freedom and verve than anyone in United colours, save for Rashford.

He made the opening goal, collecting Redmond's pass and somehow evading Marouane Fellaini before laying the ball off for Armstrong to crash home.

He was strong throughout, using his body well and linking the play while working tirelessly for his team.

Redmond, meanwhile, looked the Saints' biggest threat and if the hosts were going to re-take the lead, the smart money would have been on the winger-turned-forward being involved.

It has been a wretched couple of years for the Saints but in Obafemi and the revitalised – though still goalless – Redmond they have a focal point to build around.