Antonio Conte’s Chelsea suffered a second defeat in four games as they fell to a 2-0 defeat to Manchester United at Old Trafford.

Capitalising on a curiously toothless Chelsea performance, United played with intensity, organisation and aggression, Marcus Rashford and Ander Herrera finding the back of the net to give Jose Mourinho a much-needed three points.

The result leaves Tottenham breathing down Chelsea’s necks. The lead is now just four points and the Blues can ill afford another slip-up this stage. United, on the other hand, furthered their claim for a top-four spot, sitting four points behind Manchester City with a game in hand.

Here are five things we learned from the game:

United are certain to spend lavishly in the quest for marquee attacking upgrades in the summer but, with Marcus Rashford and Jesse Lingard offering an exciting glimpse into what they can achieve together, Mourinho will have food for thought.

With Zlatan Ibrahimovic starting the game on the bench, Rashford and Lingard duly stepped up to the plate, running hard to move Chelsea’s defenders all over the place and connecting with each other at every possible opportunity.

Together, Rashford and Lingard led the line valiantly to spearhead United’s most impressive performance of the season and, should they be afforded further opportunities to play together, there’s no reason to doubt the duo as a potential partnership.

Lingard would have to add more goals to his game, of course, but together there is a connection there that can prove devastating for United. Because he’s arrived with much fanfare and scored 28 goals, supporters don’t like to think about a team without Ibrahimovic, but United are undoubtedly more penetrative and mobile when he’s not playing.

Wrong time for Chelsea to fall out of form

Antonio Conte: "I think they deserved to win… We have to work together and find quickly the right desire and ambition to win the title." pic.twitter.com/go4fhEkjBw

As an attacking force, Chelsea have been irresistible for most of the season, but they looked toothless, uninspired and bereft of ideas at Old Trafford. The statistic the spread across Twitter like wildfire happened to be the most withering: it was the first time since they failed to register a shot on target since September 2007.

Of course, much of that is owed to United’s impenetrable defending, but the fact that Eden Hazard, Diego Costa and Pedro failed to create a single clear-cut chance will be a specific worry for Conte.

What’s more disappointing, though, for the Chelsea boss was the attitude of Costa and Hazard. The Spaniard, who doesn’t need much encouragement to show his stormy side, got himself embroiled in a duel with Marcos Rojo which affected his focus in the first-half. While Hazard portrayed his tactical naivety in failing to recognise that he could punish United out wide.

It’s far from being a crisis for Chelsea, but Conte needs to re-motivate before facing Spurs at Wembley next week in what will be a massive psychological showdown between the top two teams in the country.

Collectively, United deserve credit for their performance, but once again Eric Bailly stood out in the centre of defence. The Ivory Coast international stood up to Diego Costa, allowing Rojo to rough the striker up as he simply sat back and defended.

Bailly won nine duels, five tackles and one interception in another highly-competent display which enhances his reputation as the future of United’s defence. With the futures of Chris Smalling and Phil Jones in doubt, Bailly has extraordinary potential to replace them and be a leader at the back for Mourinho on a weekly basis.

His upward trajectory since signing from Villarreal in the summer has been impressive. He’s had his fair share of injury woes but he’s already emphatically proven that, given a run of games, he can adapt to different challenges and relishes the physical side of the game as much as anyone – his tussle with Costa attests to that.

Should Bailly continue in a similar manner, his transfer value will sky rocket and it will be difficult to keep hold of him. In time, it will be up to Mourinho to convince Bailly that his future lies with United. For now, he’s performing at the peak of his powers and it’s helping United’s defensive cause immensely.

Conte Needs To Be Bold In Midfield

There's a reason Hazard and Kante are nominated for player of the year, one bad game doesn't change that. https://t.co/bxbkLlO7pI

On paper, N’Golo Kante and Nemanja Matic is a fearful midfield duo. However, as Kante attempted to do both of their jobs, his Serbian colleague strangely went missing.

Usually a wonderfully effective defensive shield, Matic was shaken by United’s mobility and willing runners, leaving the defence without much protection and serving to silence Kante’s attacking threat while he mopped up Matic’s mess.

When he was subbed off, his stats read: one foul, no aerial duels won, no tackles won, no clearances, no blocks. There has been much debate over Matic’s merits compared to the more creative Cesc Fabregas, but the fact that the Spaniard lifted – albeit slightly – his side when he was introduced will force Conte into an important decision for the Spurs game.

With Fabregas possessing the ability to influence the game in the final third, Conte may decide to take the bolder option and favour the Spaniard’s craft and guile over the Serbian’s muscle.

Ander Herrera redeems himself to be United’s hero 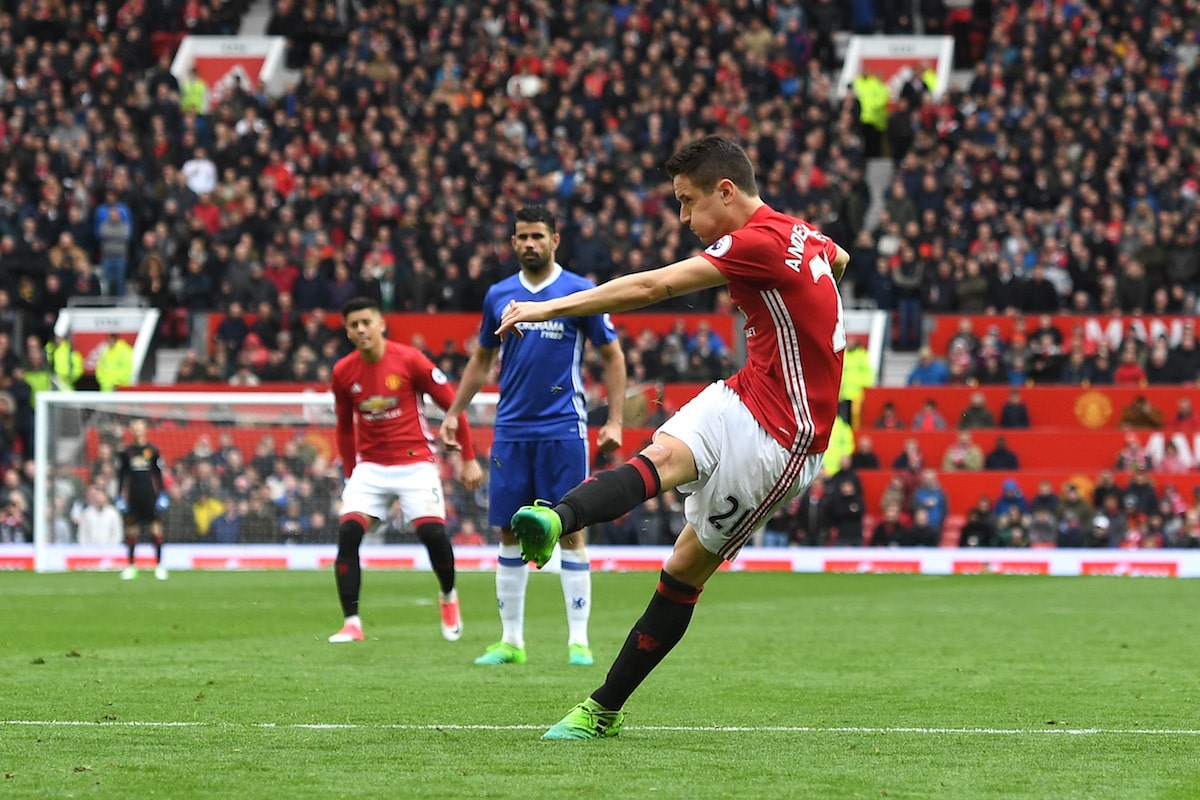 Spare a thought for Ander Herrera. In United’s last two games against Chelsea, he’s been tasked with stopping Hazard, a player who has been virtually unstoppable this season.

At Stamford Bridge in the FA Cup, it didn’t work out. Herrera was run ragged by the Belgian before eventually getting himself sent off.

The Spaniard's red card killed United’s chances of advancing in the cup and there’s no doubt that he was kicking himself in the dressing room following their elimination.

However, to silence Hazard at Old Trafford was a great redemptive feat by the former Athletic Bilbao man.

From start to finish, Herrera was the engine, the heartbeat and the warrior. Marking Hazard is about as fun as a day working exclusively on Excel spreadsheets, but he stuck to his task professionally.

For his troubles, Herrera bagged himself a stylish assist when he sliced Chelsea’s defence open with a pass to Rashford for the opener (via a handball, admittedly), while he bagged his first league goal in a year with a deflected strike to seal the victory.

Expressing himself all over the pitch, Herrera was a winner through and through for United in an emphatic affirmation of his credentials.

He’s grown to become one of the first names on the team-sheet for Mourinho and, with gutsy performances like this, it’s not difficult to see why.