Manchester City proved once and for all that they are the best team in the land, securing a historic domestic treble.

No team in the history of the men’s game in England has completed such a feat, and Pep Guardiola’s side also matched another record as they saw off Watford in this one-sided final.

A brace apiece from Gabriel Jesus and Raheem Sterling, plus goals from David Silva and substitute Kevin De Bruyne made up the six, while Ederson, Vincent Kompany et al kept Watford out at the other end.

Here's what we learned from the English football's season finale.

De Bruyne is still one of the best around 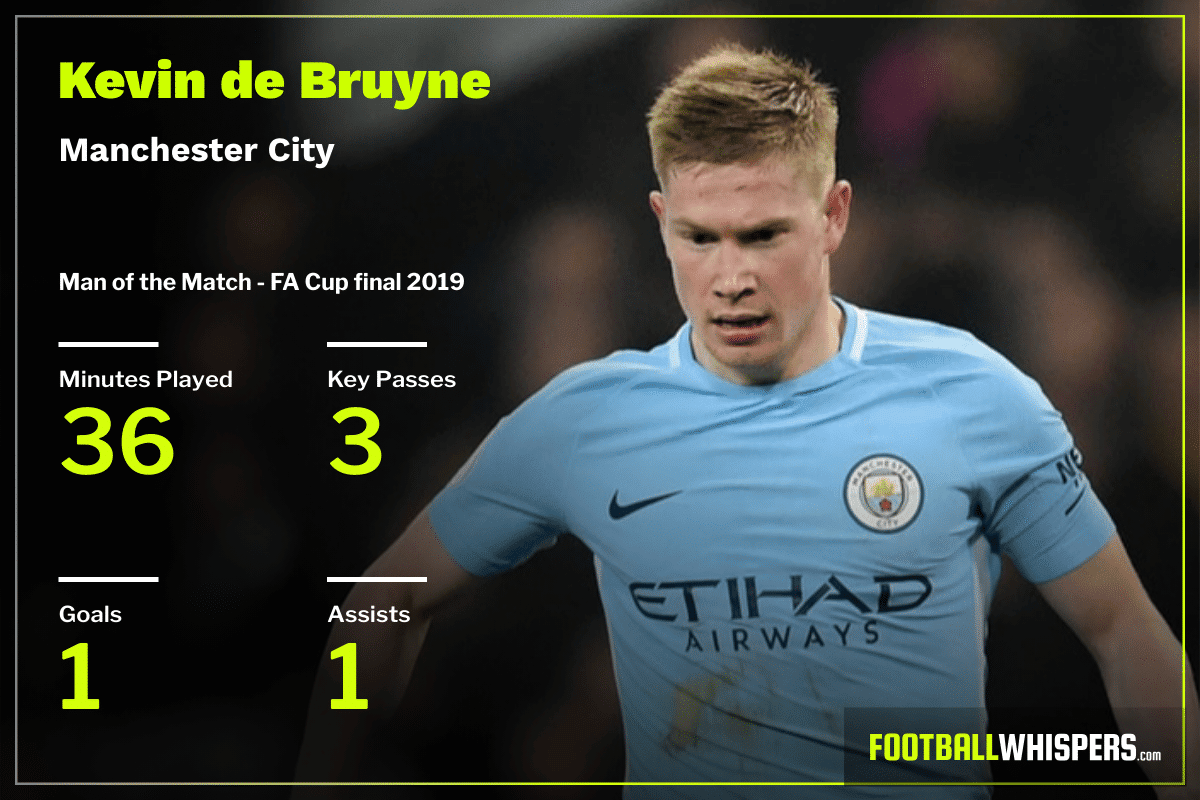 Riyad Mahrez didn’t look too pleased when he was withdrawn on 55 minutes. The club’s record signing had remained seated on the bench for five of the last six league games, and also for the FA Cup semi-final against Brighton.

Here he got his start, but lasted less than an hour and was replaced by Kevin De Bruyne, but it was a move from Guardiola which meant his side kept their foot on the pedal on their way to a record-breaking performance.

De Bruyne would have the same mindset coming onto the pitch whether his team were 2-0 up or 2-0 down. Here he kept them pushing forward, looking to prove to himself and others that his injury problems are behind him and that he can still take games by the scruff of the neck.

He did just that, steering his side to four more goals and into the record books in the process.

He scored one, assisted another, made three key passes, completed two dribbles, and didn’t misplace a single pass.

Watford had a chance…

Though the game finished 6-0, the first big chance of the game fell to Watford and Roberto Pereyra.

Gerard Deulofeu played a nice pass to the Argentinian as Watford countered, but the chance came to nothing thanks to a great Ederson save, or a bad miss from the left winger, depending on which way you choose to look at it.

This was Watford’s biggest chance, but they still managed a total of 11 shots on goal. Almost half of these were blocked by an impressive City defence which played well but will be overshadowed by their attack.

this isn't news to anyone who watched but this match was indeed the massive paddlin the scoreline suggests pic.twitter.com/XijsUjIhrm

Would this game have been different if Watford had taken this early chance? Probably not, but it still felt like an important moment, and one which saw City’s Brazilian goalkeeper Ederson receive praise from his manager for at the end of the game.

“In the final, these kind of things make the difference,” said Guardiola.

“Ederson saved us at a key point at the beginning of the game, because 1-0 would have been really difficult for us.” 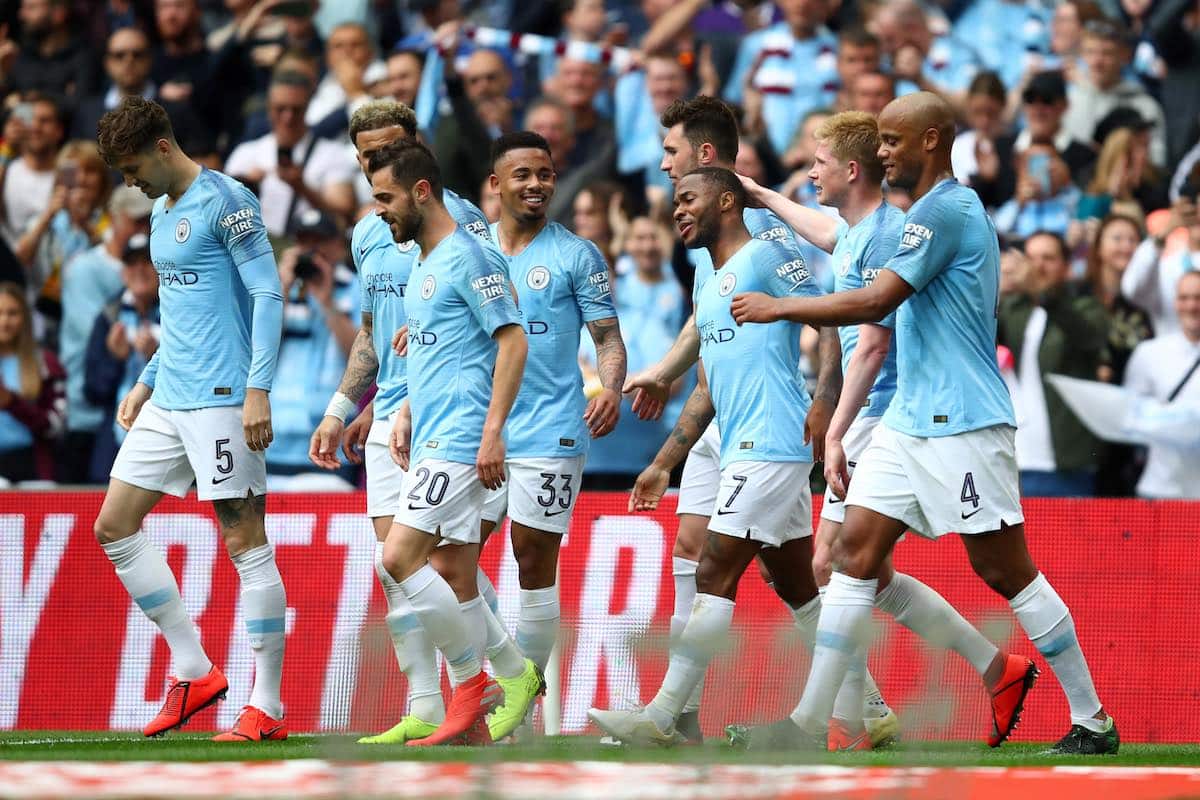 Manchester City’s lineup on paper depicted a 4-3-3. It’s the starting formation used by Guardiola in the majority of his side’s games but can vary depending on the opposition and the personnel making up the City XI.

Some digging reveals that the their setup in this FA Cup final was a fairly narrow one which consisted mostly of attacking midfielders.

Gabriel Jesus dropped to link up play while full-backs Kyle Walker and Oleksandr Zinchenko regularly tucked inside alongside the deeper midfielders, and there wasn’t much distance between Ilkay Gundogan and Jesus when looking at the player’s average positions.

Raheem Sterling drifted into space vacated by Jesus, with only Mahrez sticking to his wide position — maybe this is why he was substituted!

Walker’s average position puts him in an area which would suggest he was on the right of a back three, while Zinchenko was slightly more attacking on the left.

The narrowness may be part of Guardiola's ongoing quest for his side to become better at winning second balls, and it worked here.

It’s now 11 games since Watford last managed to not lose against Man City. Back in April 2007 the sides played out a 1-1 draw at Vicarage Road with goals on that day coming from Tamas Priskin and Darius Vassell.

Since then the Hornets have conceded 38 goals in the 11 meetings between the two, with today’s game the latest in a long line of disappointing defeats.

“It wasn't as easy as the score makes it look,” said City captain Kompany, but the xG score of 5.2 – 0.7 suggests the scoreline accurately reflects the game.

Possession was 70-30 in the victor’s favour and the shot count was 23-11. Watford were always underdogs, but once City took the lead it felt like game over. 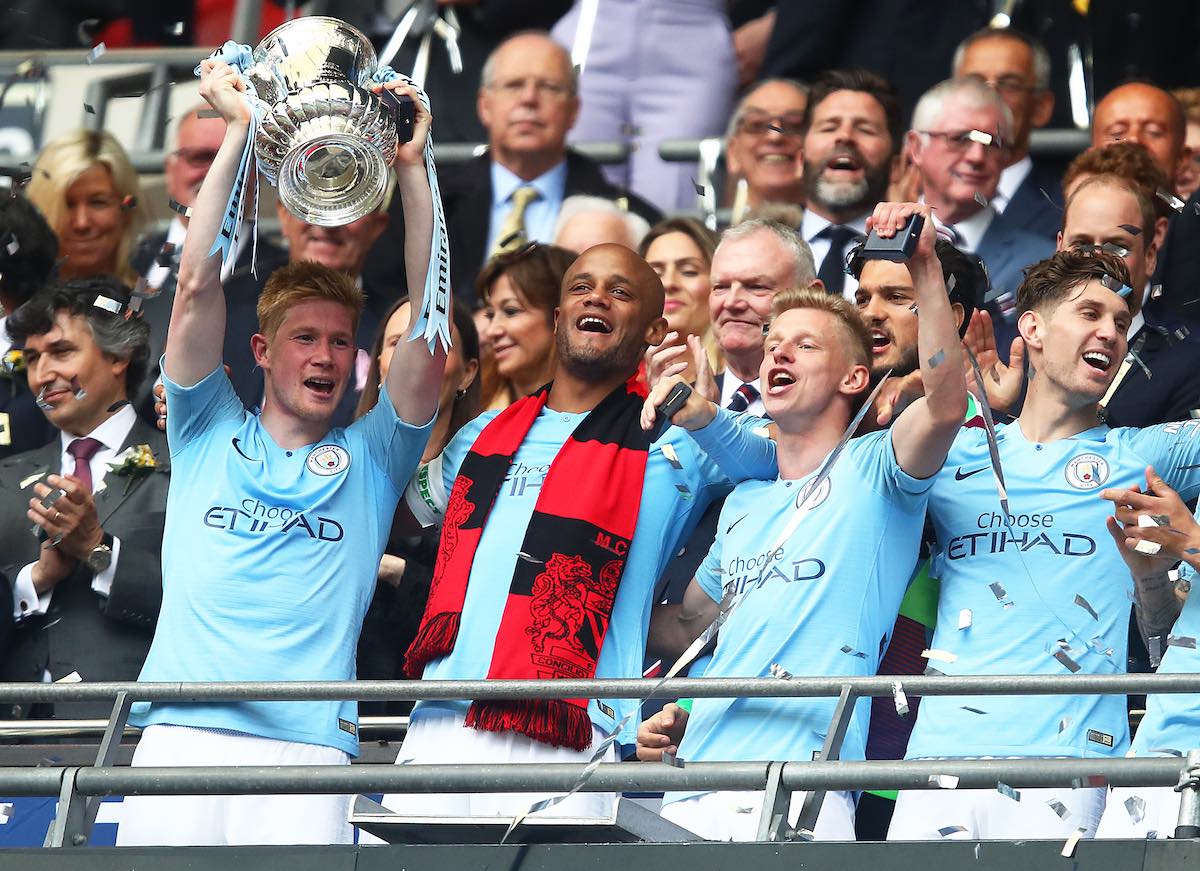 We have to go all the way back to 1903 for such a one sided result. That year, Bury defeated Derby 6-0 which is now the joint biggest win in FA Cup final history having been matched by Man City here.

Blackburn Rovers are the only other side to have scored six in an FA Cup final, doing so in 1890 when they defeated The Wednesday 6-1.

Lancashire clubs with the three biggest scores in Cup finals.

This victory sees City become the first English men’s side to win a domestic treble, a feat which has been achieved in many countries across Europe but not in England, until now.

Arsenal Women achieved this in 2007, while men’s sides Rhyl, Derry City, Bohemians, Linfield, Shamrock Rovers, Celtic and Rangers have done so in their respective countries within the British Isles.

That City have become the first English men’s side to do so is a demonstration of their excellent squad depth and ability to motivate themselves to win for an entire season, despite coming up against some of the best managers and players in Europe in a league which has produced all four European cup finalists.

Manchester City haven’t achieved domestic dominance because they are up against poor quality opposition, they have done so thanks to being a well run club with an excellent squad and manager.