Well what Thomas Tuchel can claim is that he has never lost a game at Anfield inside 90 minutes. Unfortunately for the German, and for his Paris Saint-Germain side, games tend to go on just that little bit longer.

And it's in those final moments, the dying seconds, that Liverpool have often produced magical moments.

They did so in 2016 to overcome Tuchel's Borussia Dortmund and history repeated itself as Roberto Firmino's 91st minute strike secured a deserved 3-2 win for the Reds in their Champions League opener.

But it didn't have to be that way; nails didn't have to be bitten, nerves jangled. Liverpool controlled this game almost from start to finish. They were better than PSG in almost every department, even if the scoreline didn't reflect that.

Daniel Sturridge put the Reds in front with an excellent header before James Milner converted a penalty to put the hosts in control.

But Thomas Meunier's strike in the first half gave PSG a lifeline, but it wasn't one they took advantage of until late on, when the ball fell in the box to Kylian Mbappé with seven minutes to play and he swept home.

But Firmino, brought on from the bench, ensured it was Liverpool's night. And here are the five things we learned from the clash at Anfield.

The Champions League draw wasn't particularly kind to last season's finalists, with the Reds going into a group that not only contained PSG, the Ligue 1 champions, but also a Napoli side which racked up over 90 points in Serie A last season.

So getting off to a good start was vital for Liverpool's chances of progressing through the group. Thankfully Jürgen Klopp's side did so and when they returned the Anfield dressing room, the players would have realised just how an important win it was.

Napoli were held, surprisingly, by Red Star Belgrade, the supposed whipping boys of this group. So Liverpool sit top of the early table, already with a two-point advantage over those below them.

After only 90 minutes, the Reds have an excellent opportunity to not only qualify but to do so as the winners of group.

Neymar up against Trent Alexander-Arnold was one of the most intriguing battles of the contest. How would the young defender fare against one of the world's best attackers?

Well defensively he was largely untested. The Brazilian had little impact on the contest and that meant the Liverpool academy graduate could focus on getting forward.

As a former midfielder, Alexander-Arnold's comfort in the attacking third isn't a surprise. And his delivery into the penalty area is one of his big strengths.

However, against PSG he was often wasteful when putting crosses into the penalty area. 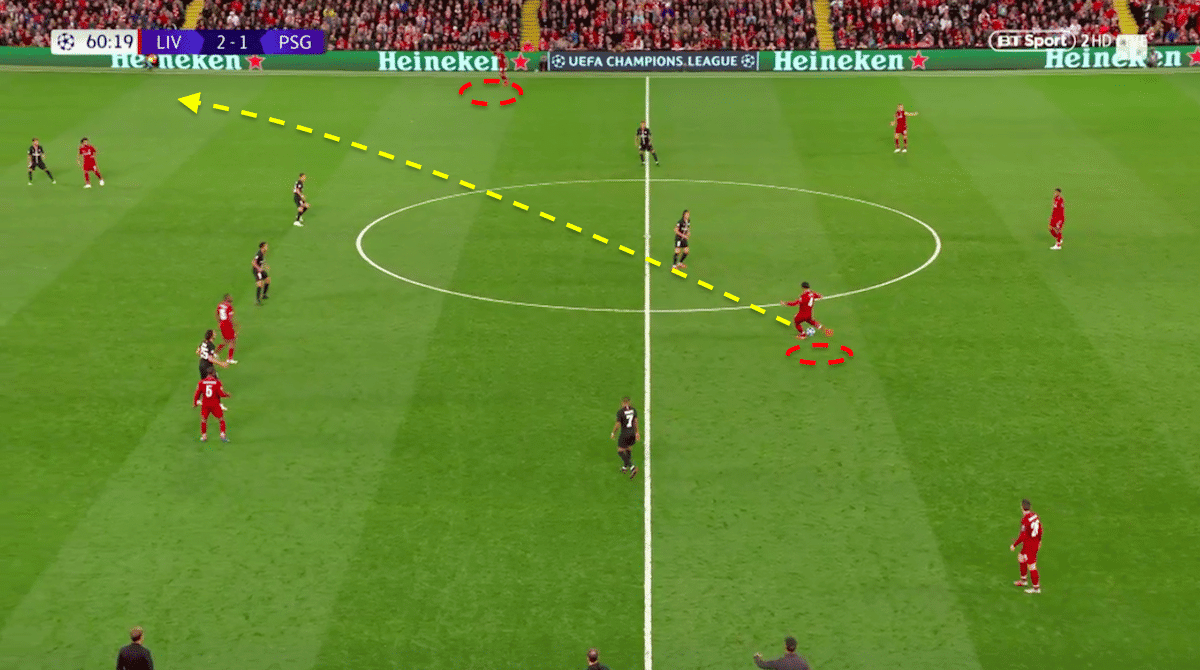 As shown above, the 19-year-old had acres of space on the right flank of the Anfield pitch. Neymar, who is standing on the halfway line, had zero interest in tracking more (more on that below). 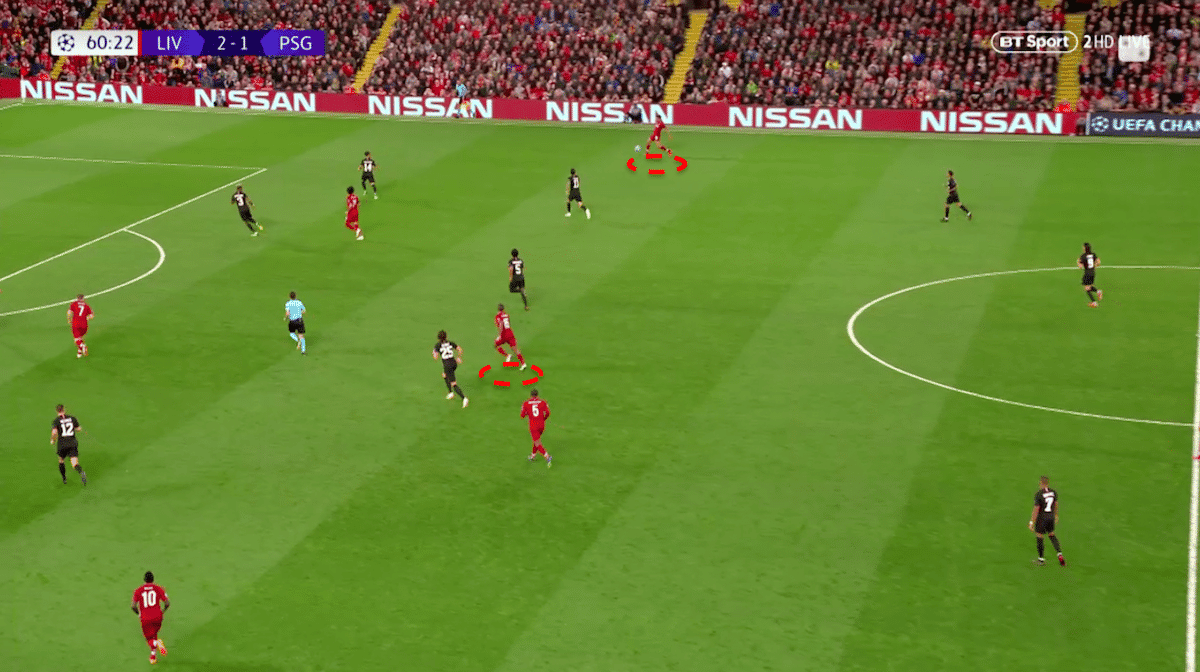 That space was exploited well by the Reds, with Virgil van Dijk constantly clipping passes to his full-back.

With time and space Alexander-Arnold was able to bring the ball down before Ángel Di Maria trundled over to close him down. 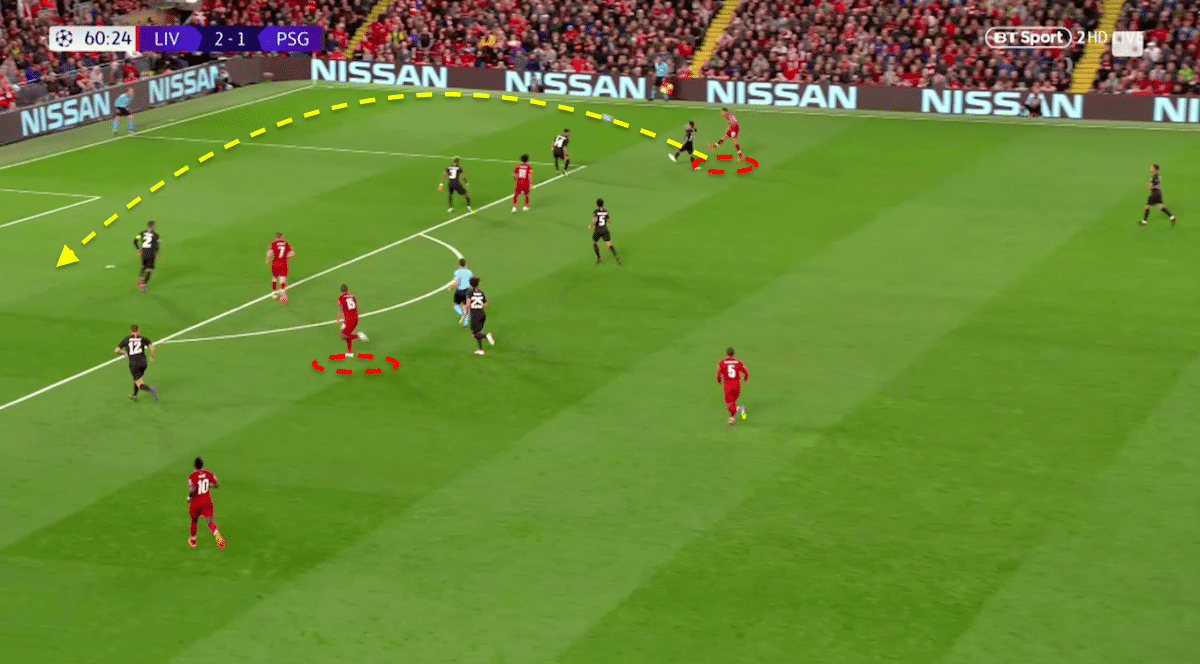 But too often, as shown in the example below, his cross into the area was either overhit or too deep. Sturridge this time broke late into the box but wasn't able to get close to the ball. 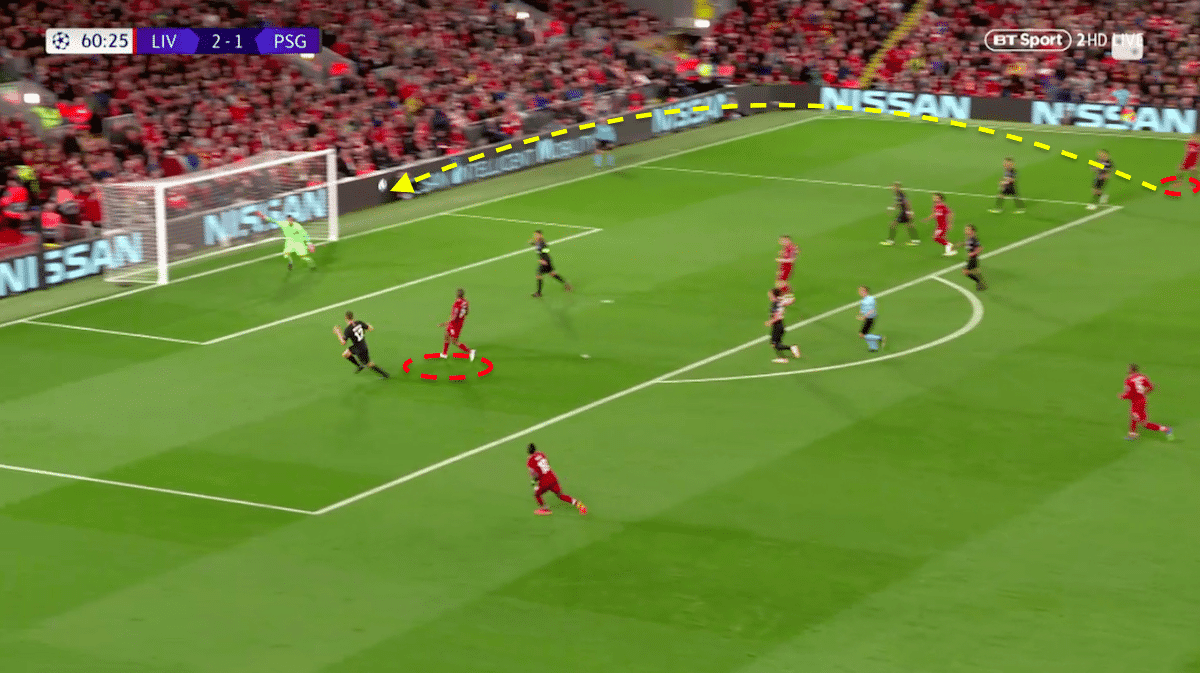 Alexander-Arnold ended the contest having completed just 27 per cent of his crosses attempted. Had his radar been a little more accurate, the Reds may not have needed the last-gasp heroics to win the contest.

At the age of 32 there is little doubt that Milner is in the form of his life. Quite simply, is there anything he can't do?

On the basis of the contest at Anfield this evening, the answer is no. Pressing? Superb. Interceptions? Time and time again. Passing? Crisp and incisive. And coolness under pressure? Well just watch his penalty.

The only thing that could be marked against him was his delivery from wide areas, but let's no quibble. Milner was the best player on the pitch and the stats reflected that.

Quite how England boss Gareth Southgate must feel is anyone's guess. Milner is the outstanding English centre midfielder at his point in time and, unfortunately for the Three Lions, he can't be picked.

So much is, rightly, made of Liverpool's brilliant front three that when one of them isn't in the side – in this case Roberto Firmino – the man brought into the team is going to come under scrutiny.

So Sturridge will have known the pressure was on to impress for the Reds on European football's biggest stage.

What has never been in question during his time at Anfield is, however, his talent. When fit and fully motivated the striker is one of the best in the Premier League.

But stylistically he is completely different to Firmino. The England international's game is about goals and, to be blunt, little else.

So he needs to be scoring to justify his place in the side. And he did just that. Right place, right time, to head in Andrew Robertson's excellent cross.

The 29-year-old had an opportunity to double his tally but wasn't as clinical. But, when he was replaced by Firmino with 20 minutes to play, he'd have undoubtedly felt he'd done his job.

Let's get the obvious out the way, Neymar, Edínson Cavani and Kylian Mbappé are all brilliant footballers. Three of the best in their position in the world.

And yet they create a problem for PSG in that they have little interest in tracking back and defending. Now in Ligue 1, that lacklustre attitude to the ugly side of the game can be papered over. PSG are too dominant for it to matter.

But against the best Europe has to offer, it often leads to the Parisians being overrun in midfield and exposed out wide.

It's a problem for Tuchel, one he must fix if PSG are to progress into the latter stages of this season's competition. But he can't do it alone. Neymar and Mbappé have to realise that for the benefit of their side's ambitions, they'll have to sacrifice themselves a little.

Fail do to so and another quarter final exit beckons.