Two goals in the final four minutes saw Manchester United come from behind to clinch a dramatic 2-1 win over Juventus after Cristiano Ronaldo had scored his first Champions League goal for the Bianconeri.

The result means United are second in Group H, two points ahead of Valencia, with games against the Spaniards and Young Boys to come. Juve dominated the match but lost momentum when José Mourinho introduced Juan Mata and Marouane Fellaini in the second half.

It was Mata who drew the Red Devils level, lifting a sumptuous free-kick over the hosts' wall and past Wojciech Szczęsny in the 86th minute.

Then, in the 90th minute another free-kick led to Manchester United's winner, Alex Sandro nodding past his own keeper to seal a dramatic comeback for the Premier League side who have nine points from four Champions League games.

Mario Mandžukić, João Cancelo. The names roll off the tongue…and yet they were just a handful of Juventus' substitutes on the night.

After losing two of the last four Champions League finals the Bianconeri went big in the summer transfer window – not simply by signing Ronaldo, but by adding the kind of depth they needed to compete in Europe while continuing their domestic dominance.

After beating Cagliari 3-1 at the weekend to maintain their unbeaten start to the Serie A campaign coach Max Allegri was able to bring Sami Khedira, Giorgio Chiellini, Alex Sandro and Juan Cuadrado back into the starting XI after affording them a res at the weekend. They weren't even able to call upon Emre Can, a player they spent so long chasing last season while at Liverpool, due to illness.

After coming within a whisker of their first Champions League win since 1996 enough was clearly enough and Juventus have staked the lot on a continental glory at long, long last. On the evidence of these two games against United and their staggering depth, you'd be hard-pushed to make a case against them.

Prior to his first return to Turin the Manchester United enigma was looking forward to returning to the club he called ‘home' before rejoining the Red Devils three summers ago.

“I expected it, it was crazy,” Pogba said, speaking to Italian outlet RMC Sport. “I spoke with my brother last summer and I said: ‘Imagine, we're in the same group as Juve'. For me it's a pleasure, Turin is my home, it's there that I scored my first professional goal.”

Yet while Ronaldo (more on him later) flourished against his former employers, Pogba wilted. It's not like the Frenchman isn't capable of big-game performances – he very much is.

He scored in the Europa League final in his first season at United and was totemic in the come-from-behind win over rivals Manchester City last season, scoring twice to deny Pep Guardiola's men their Premier League coronation at the Etihad. And on the international scene he appears to be a different player for Les Bleus, delivering for Didier Deschamps' side in Russia. 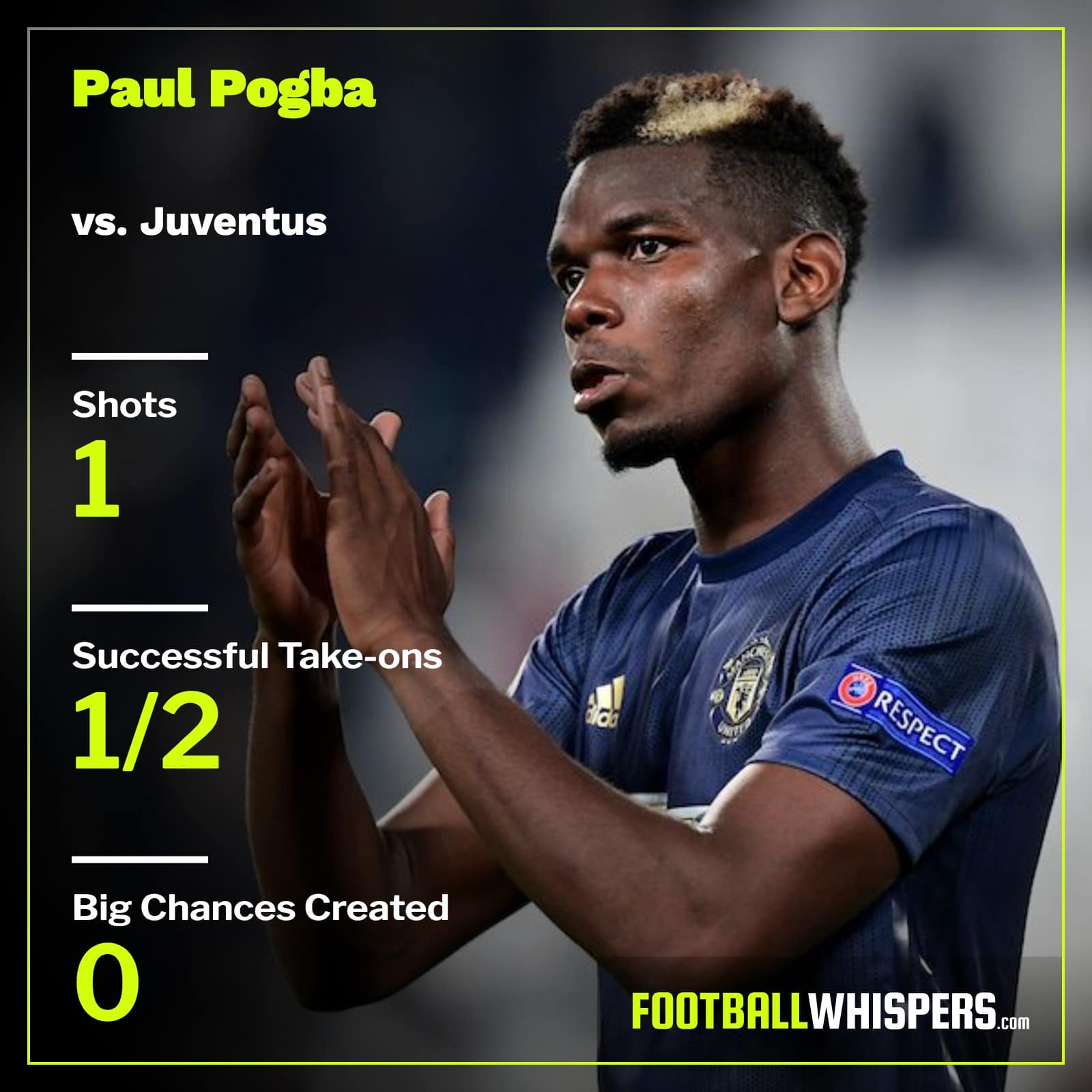 Yet in Turin tonight he was not so much disappointing as downright absent, underlined in his statistical output above. Yes, he looked to have nabbed the winner from point-blank range for a moment but that would have papered over the cracks. The big players thrive on the big occasion. Can Pogba truly be included in that number?

Contrary to Pogba, Ronaldo stepped up when it counted most. The Champions League's all-time top scorer went into the game on something of a European drought having not scored since, ironically, that overhead kick against his future employers in April and was yet to break his duck for the Old Lady in Europe's biggest club competition.

It was never in doubt, was it?

Having drawn a blank on his return to Old Trafford a fortnight ago the Portuguese wasn't going to be denied twice and when his moment came, it was a typically breath-taking effort. Leonardo Bonucci raked a ball over the top, finding the run of the Juve No.7 and, having appeared to weigh up a bicycle kick, Ronaldo thrashed home a stunning first-time volley. 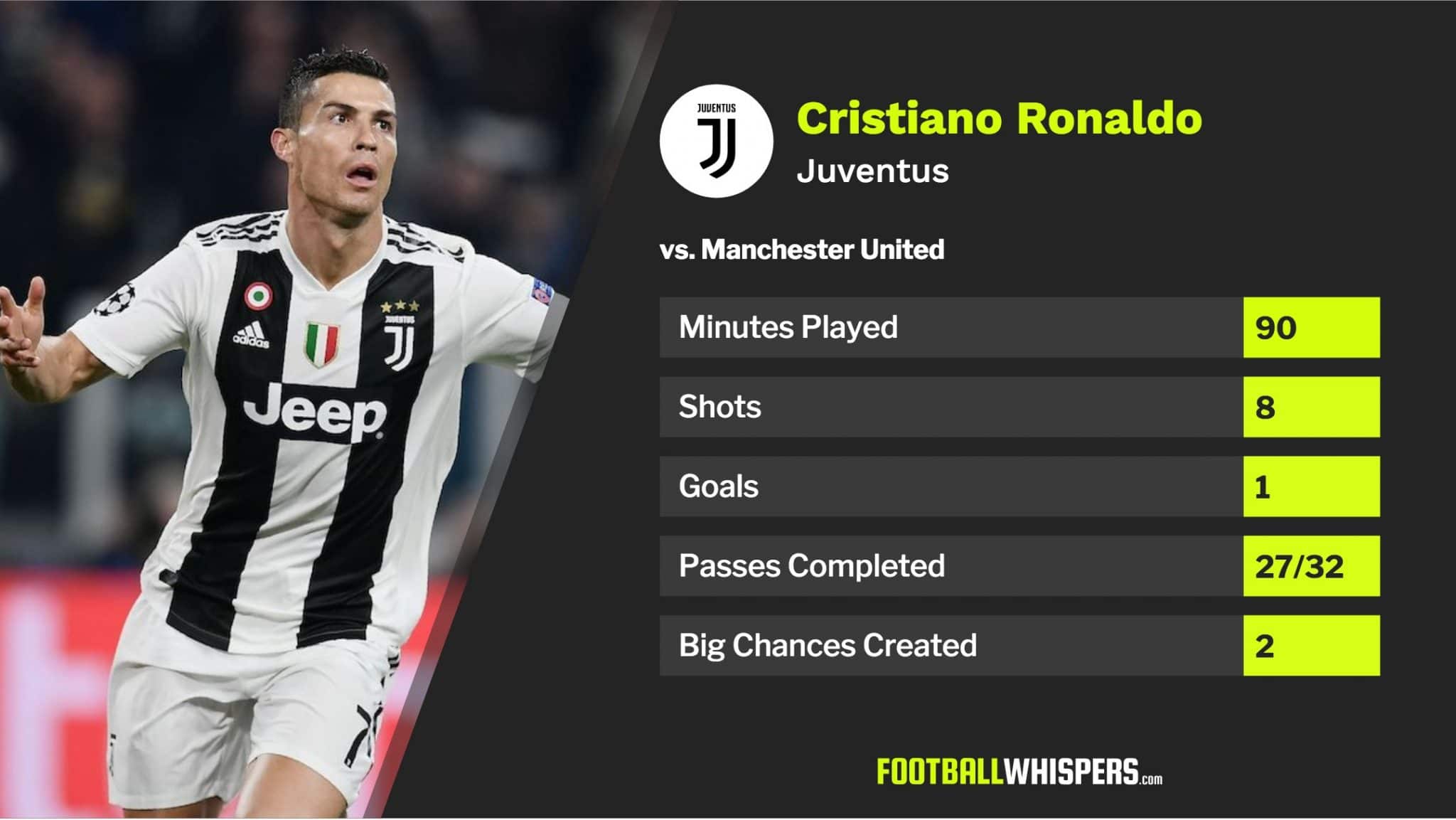 Signing the former Real Madrid man was meant to be the final piece of the jigsaw and, after a slow start to life in Turin, the 33-year-old is showing ominous signs of finding his best form for the Champions League hopefuls.

Credit for Mourinho when it's due

United were wholly outclassed in the first meeting between these two sides at Old Trafford, though Paulo Dybala's strike was the only thing separating the two sides on the night. Similar was expected in Turin where Juve have lost just twice in their last 34 Champions League meetings.

But Mourinho had clearly learnt from that humbling defeat and brought Ander Herrera in to stiffen up the midfielder in place of Mata. The tenacious Spaniard helped give United a foothold in the game, winning two of four tackles attempted – tying with Nemanja Matić for the visitors.

Having lost the midfield battle woefully at home, it was imperative United had a foothold to build from and having three men in the centre of midfield – even if one was Pogba – did just that.

Then, trailing to Ronaldo's wonderstrike, Mourinho introduced Mata and Fellaini in place of Jesse Lingard and Alexis Sánchez with another sub, Marcus Rashford, moving into the middle to lead the line.

Mata looked to be the hero which he hoisted a delightful free-kick past Szczęsny at the death but better was still to come when Ashley Young's inswinging delivery was turned past his own keeper by Alex Sandro; the sheer presence of Fellaini, Pogba and co. causing havoc in the hosts' penalty area.

With Pogba making his first return to Turin following his £89.1million switch in the summer of 2016 all the headline were likely to be about the Frenchman. Yet it was the typically understated Bosnian playmaker who ran the midfield for the hosts.

In a star-studded team – which with the acquisition of Ronaldo only became more Hollywood this summer – Miralem Pjanić is never going to be the face of this Juventus side. But he is is one of their most important players since arriving as Pogba's de facto replacement. 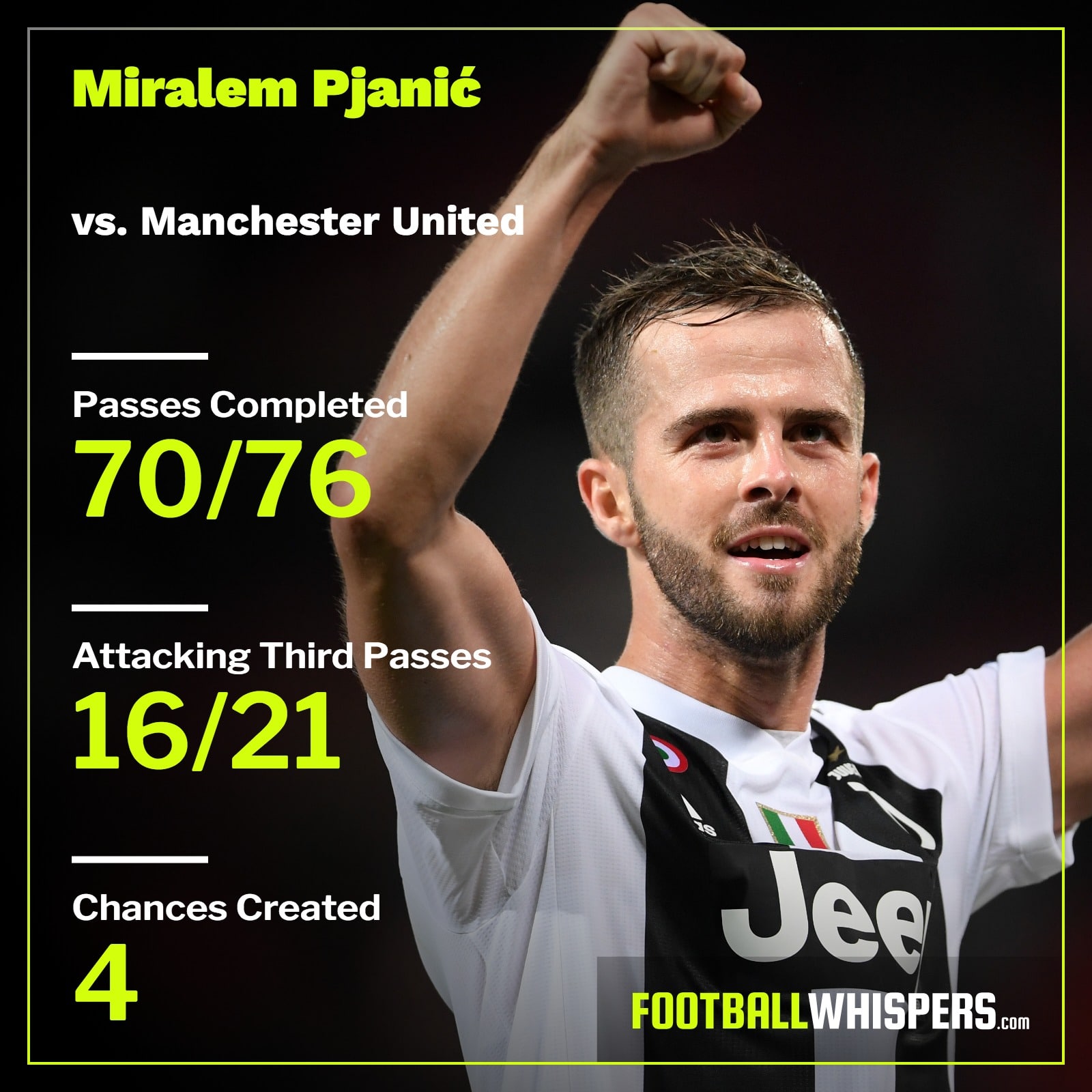 He completed 70 of 76 attempted passes – no United player managed more than Matić's 52 – and 16 of those were in the attacking third, the most of any player on the field. On top of that he created five chances for the Old Lady and won four of the five tackles he attempted.

In Serie A this season the diminutive schemer is second for accurate passes by midfielders (77.92 per 90), third for set play key passes (1.56), third for long balls (10.28) and third for total passes (84.29) while coming out second for open play shots assists with 19 overall.