England have qualified for the semi-finals of the Nations League after a dramatic come-from-behind 2-1 win over Croatia, gaining revenge their World Cup exit at the hands of the same side in Russia.

After dominating the first half at Wembley Stadium England fell behind in the 57th minute when former Leicester City flop Andrej Kramarić twisted and turned inside the box before firing home off Eric Dier.

With top spot in League A Group 4 up for grabs, Gareth Southgate gambled and introduced Jesse Lingard and Jadon Sancho from the bench. The switch paid off almost instantly as Lingard equalised from close range with 12 minutes remaining.

Then, with just five minutes left of the clock, captain Harry Kane stabbed home Ben Chilwell's wicked free-kick delivery from the left to see England through as group winners, relegating Croatia at the same time.

Here are five things we learned from Wembley…

Chilwell can make left-back spot his

One of the most impressive aspects of Gareth Southgate's management has been the way he has evolved this England side since the World Cup.

Ashley Young made the left-back slot his own in Russia but was not part of the squad for these games and Chilwell – starting his third England match in succession against Croatia – has gone a long way to making the No.3 shirt his own in recent weeks.

The Leicester City defender impressed in that memorable 3-2 win in Spain and was one of just two players – the other being Harry Winks – to hold onto his shirt for the visit of the USA on Thursday.

Given the nod for Croatia's visit in today's do-or-die UEFA Nations League clash, Chilwell put in another assured display, getting forward well in support of Marcus Rashford ahead of him without neglecting his defensive duties. 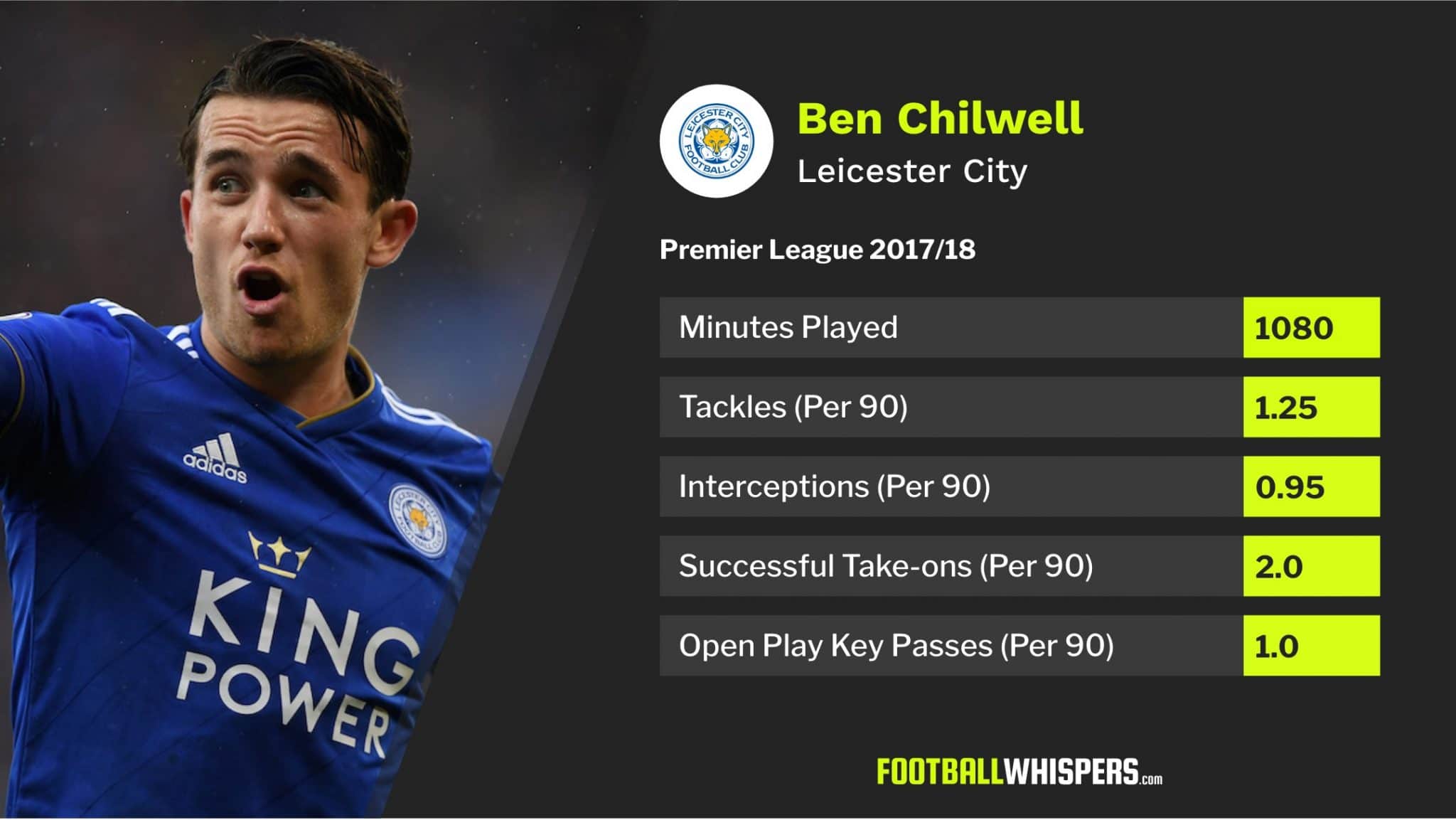 The bulk of England's attacks came down his side and given Chilwell's impressive output for Leicester this season (above) that is unsurprising.

Tottenham Hotspur full-back Danny Rose might have hoped to regain his spot from the ageing Young after the World Cup but with Chilwell's emergence that looks unlikely any time soon.

Chilwell capped his performance late on, swinging in an inviting free-kick which captain Kane stabbed home to hand England the win.

Is Maguire victim of system change?

One of the biggest surprise packages of England's run to the World Cup semi-finals was Harry Maguire. ‘Slabhead' was a star for the Three Lions – on and off the field – and in crashing home the opener in the quarter-final win over Sweden he settled plenty of nerves.

Playing on the left of Southgate's back three the sight of the powerful defender marauding forward was a joy to behold and it was little surprise his 1.34 successful take-ons per 90 was higher than any central defender in the Premier League last term. 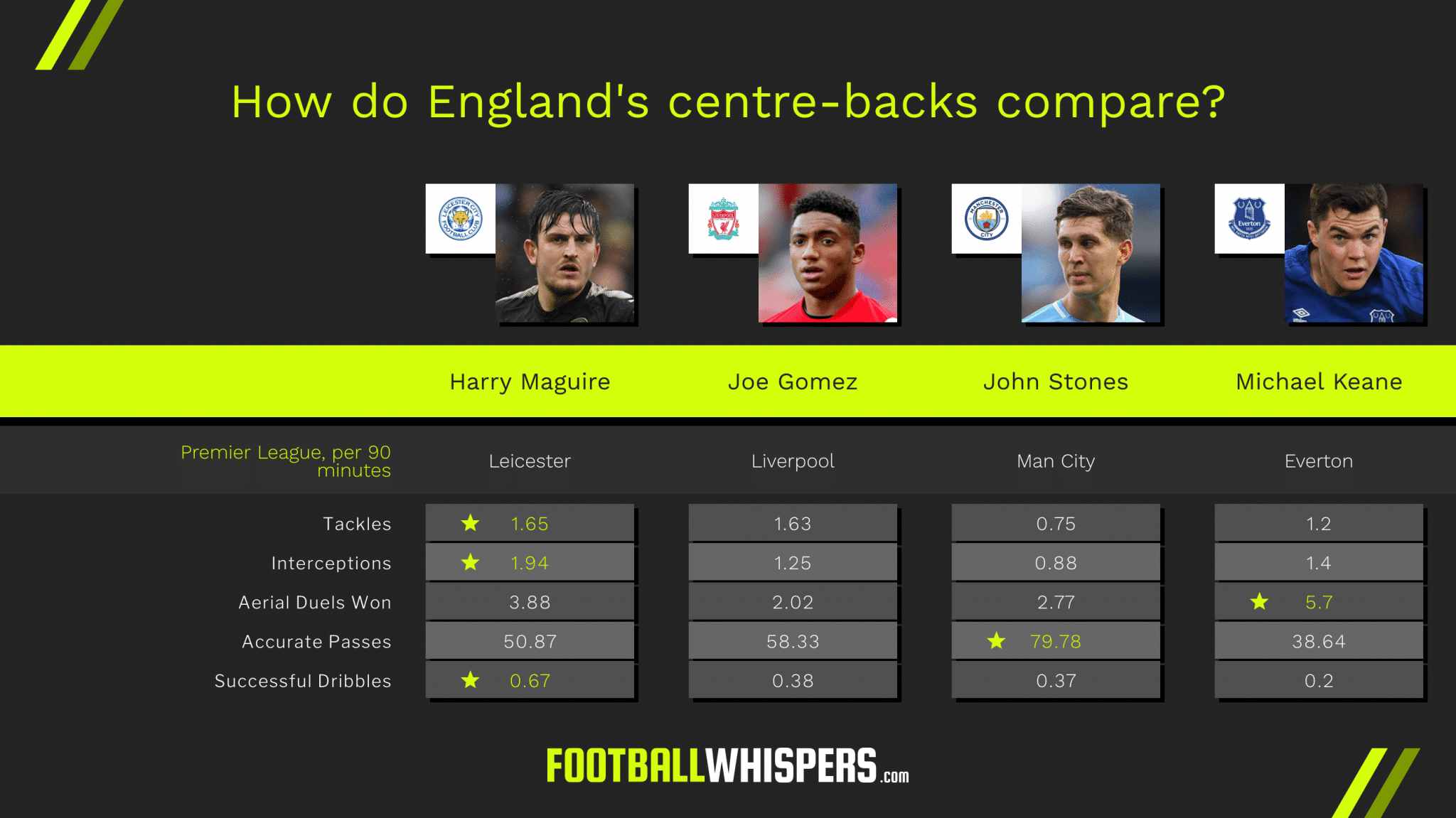 But with Southgate reverting to a back four since the World Cup Maguire has found himself facing a struggle to hold onto his starting berth, despite scarcely putting a foot wrong in his short international career thus far.

Joe Gomez‘s impressive form for Liverpool has thrust him into England contention. John Stones, his centre-half partner today, has averaged more successful passes per 90 this season (79.78) than any English centre-back. Gomez (58.33) ranks third with only Arsenal‘s Rob Holding (60.91) splitting the pair. Maguire, with 50.87, is in fourth.

All of which leaves Southgate with a dilemma. Injury denied him of Maguire's services for this week's game. A centre-half pairing is different in composition to a trio and, on this evidence, Maguire looks like the odd man out.

Delph proving worth as midfielder

Fabian Delph has had a strange career. Touted as a future star at Leeds United he made what appeared to be a very shrewd move by joining an upwardly mobile Aston Villa side in 2009. Yet a combination of serious injuries and Villa's decline in fortunes halted his progress.

Eventually the Yorkshire native did enough to earn a move to Manchester City in 2015. In the same summer Kevin De Bruyne signed for a club-record £55million, supplementing an already stacked midfield which boasted David Silva, Samir Nasri, Fernandinho and Fernando. 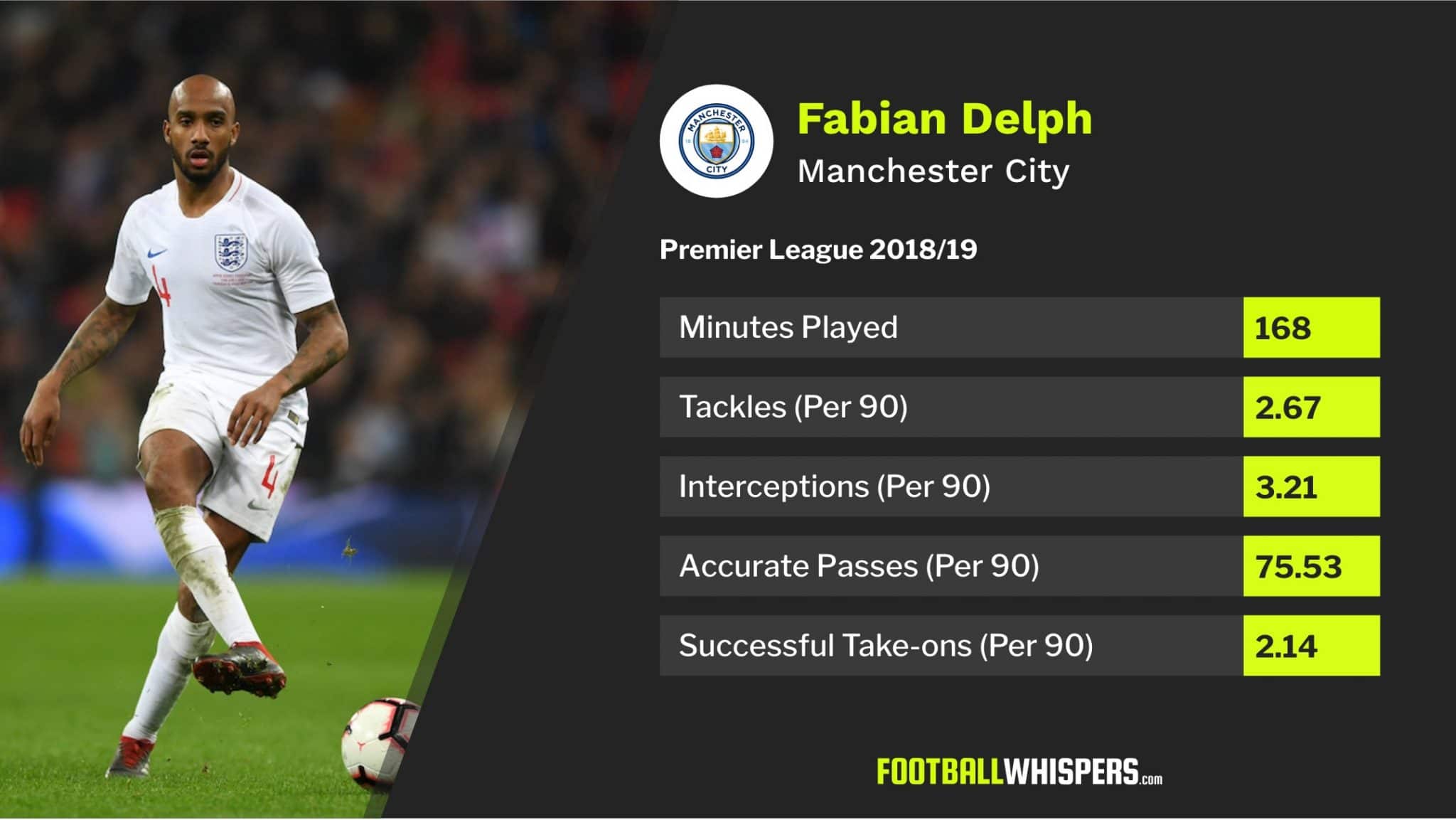 It took Delph two seasons at the Etihad Stadium to reach ten Premier League starts – albeit injury, again, hampered his cause. But when Benjamin Mendy was ruled out for the majority of last season he shone at left-back and looked to have found a new role.

But Southgate does not see the 28-year-old as a full-back – with good reason. Delph made his name as a dynamic, all-action midfielder who could use the ball intelligently. He remains exactly that.

It's clear he is well respected within the England dressing room, earning the captain's armband for the first time in Thursday's 3-0 defeat of the USA, and retained his place for Croatia's visit today. It was the Manchester City man who kept the midfield ticking over with a series of positive, probing passes.

Delph isn't England's most high-profile midfield option, but he is an unfussy, vital part of Southgate's side and the Three Lions boss has shown time and time again he selects on merit, not reputation. 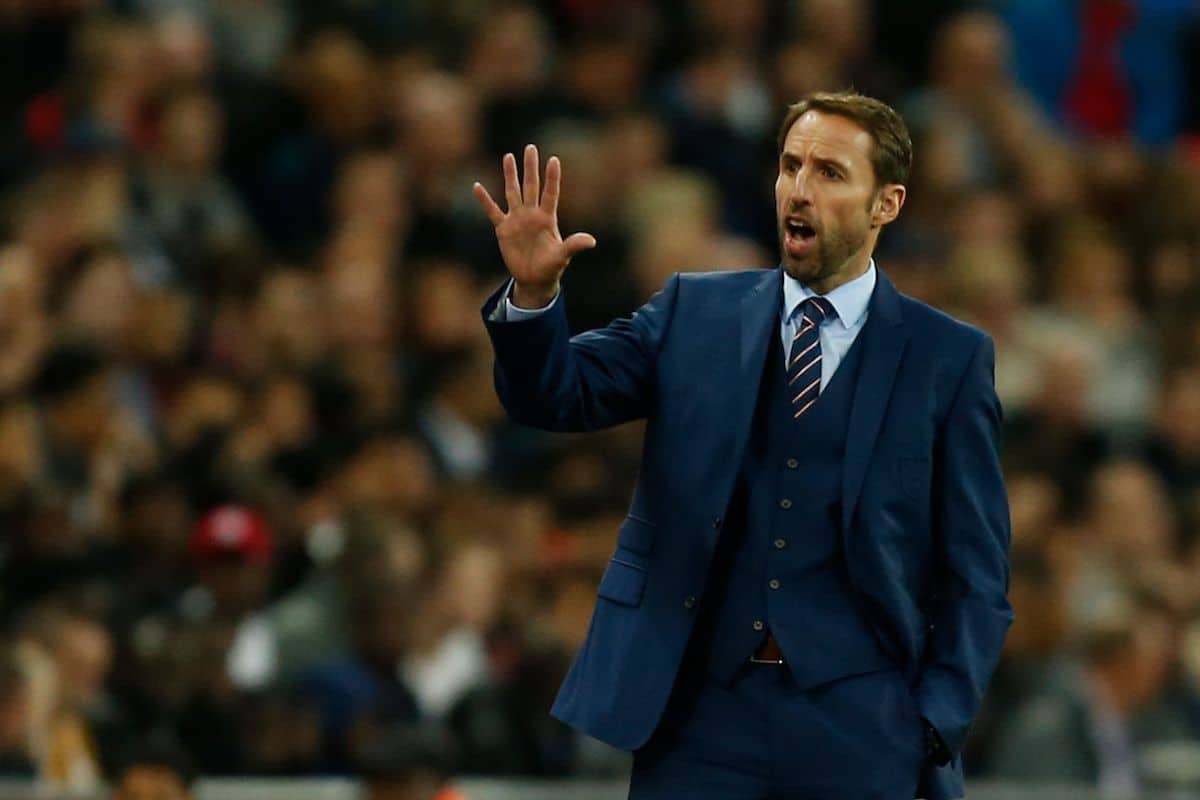 Set pieces to the rescue for England…again

The Three Lions' sudden fortune at set-pieces in Russia was welcome. It was not by chance either. Southgate had identified an opportunity to add a new dimension to his side and exploited it fully.

Eventually – and inevitably – there were those who claimed England had become ‘predictable' and ‘over reliant' on dead-ball situations. But set plays remain an integral part of the game and it was from these situations that Croatia were beaten.

A long throw from Gomez teed up the equaliser, Stones flicking the ball into the path of Kane who squared for Lingard to tuck home from point-blank range a matter of minutes after his introduction from the bench.

The winner came from an inch-perfect free-kick delivery from the left by Chilwell, who whipped the ball into the corridor of uncertainty for Kane to stretch out and stab past Croatia keeper Lovre Kalinić.

Lesser coaches would have sat back on England's World Cup success in Russia, content with delivering the nation's best display at a major tournament since the 1996 European Championships.

Not Southgate. Not a chance. After securing qualification for Russia the former England Under-21 boss changed to a back three, the system he felt gave his side the best chance of success at the World Cup. He was fully vindicated, too, as England came within a whisker of the final.

But no sooner had the World Cup finished he wiped the slate clean and reverted to 4-3-3. Southgate is a man with a plan and having crowbarred Kyle Walker into a back three at the World Cup he has since restored the Manchester City man to his preferred full-back position.

On the left, 33-year-old Manchester United stalwart Young is out in favour of the more dynamic Chilwell who already looks a seasoned England international. In midfield Ross Barkley has been reintegrated after some time out of favour for club and country.

There have been no shortage of debutants, either, with Dunk joined by Watford‘s Nathaniel Chalobah, Chelsea prospect Mason Mount, Leicester pair Demarai Gray and James Maddison, as well as Bournemouth hitman Callum Wilson.

The pace of change in football means if you aren't progressing you're going backwards. With Southgate at the helm there is no danger of England doing that.