Forget Sarriball. Forget gegenpressing. Sometimes a football match can change with the swing of a talented individual's leg. And that is exactly what happened between Chelsea and Liverpool at Stamford Bridge.

For much of the evening it appeared Eden Hazard's brilliantly constructed first-half goal would be enough to see the Blues to victory. But then, in the 89th minute, Daniel Sturridge, who'd only been on the pitch three minutes, changed the result.

He collected the ball 25 yards out, took a touch and whipped an exquisite shot into the top corner of Kepa's net. It was simply unstoppable.

And, in truth, it was what Liverpool deserved. The Reds created several chances but missed them all. Sturridge's brilliance was required.

For Chelsea the result will be difficult to take, especially given how long they'd led. But there was certainly plenty of encouragement to take from the performance.

Sarri's methods have been embraced by his side and that the Blues could be on for another title challenge. And here are the five things we learned from the clash in West London.

The arrival of Sarri at Chelsea this summer led to a complete style overhaul.

Under Antonio Conte the Blues were a reactive, counter-attacking unit who would sit off their opponents until they entered the Blues' defensive third. Under their new boss they're a proactive, possession-based side who press high up the field.

The transformation has occurred far quicker than many expected, as Jürgen Klopp admitted this week. However, the German knew the change would allow his side goalscoring opportunities.

He said: “The Chelsea team of the last two years were perfectly organised, good defending on the highest level.

“It was not bus parking, but a very good defensive team with world class players on the pitch. Now it is different. We will have our chances.”

Klopp was right and Liverpool did have several clear sights of goal at Stamford Bridge. Unfortunately for the Reds a combination of poor finishing and good defending meant they were unable to reduce the deficit prior to Sturridge's stunner.

Chelsea, meanwhile, were wedded to their new style throughout. They played in tight areas, took risks in possession and their goal was the epitome of what Sarri wants from his side.

In this week's episode of Three Minute Myths we looked into the data to discover whether Marcos Alonso was the Premier League's best attacking left-back.

The answer? Well it wasn't exactly that simple, and that was because of Andrew Robertson. And at Stamford Bridge the two full-backs were both in action.

Going forward there are few better than the Spaniard and the Scot in Europe. The former chips in precious goals during a season while the latter is an excellent provider, with his devilish crosses into the opposition area a constant threat.

Defensively, however, there are holes in their game and they were highlighted during the 90 minutes in West London.

Alonso, particularly in the first half, struggled against Mohamed Salah. The Liverpool winger constantly found space, either behind or in front of the Chelsea No.3, and had several opportunities on goal.

Robertson, meanwhile, was caught out twice by Willian, who broke in behind the Liverpool defence to collect raking passes from David Luiz. On the first occasion the Brazilian was denied by Alisson while the second resulted in a chance for Olivier Giroud.

Going forward there are few better but to be considered the best in Europe both need to tighten up defensively.

Chelsea lucky to have Hazard

Prior to the game, in an interview with BT Sport, Hazard revealed that he did want to quit Chelsea in the summer.

He said: “After the World Cup I wanted to leave because my dream is to play in Spain. But then I talked with the board here, the manager and I said ‘ok, you don't want me to leave no problem. I'm happy.'” 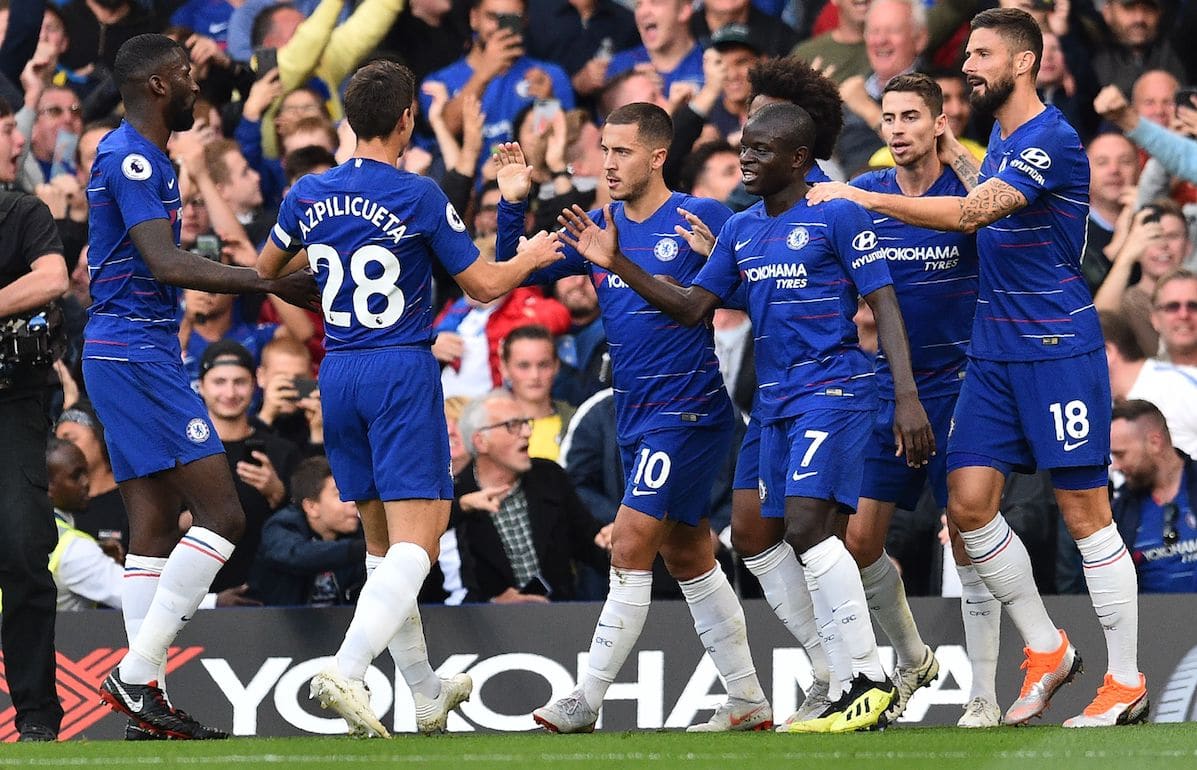 How fortunate the Blues are that their No.10 is a model pro. Several other players in Hazard's position – think Thibault Courtois – would've kicked up a fuss or made their position untenable in order to get their move.

Instead the Blues' brilliant Belgian got to work under Maurizio Sarri and is now playing the best football of his Chelsea career.

Freed of the defensive responsibility placed upon him by José Mourinho and Antonio Conte, Hazard is able to wreck constant havoc; dropping deep, running in behind and taking players on at will.

In front of goal, too, he's become more clinical. His sixth Premier League goal of the campaign came from his just eighth shot, a conversion rate of 75 per cent.

While he will not keep that up throughout the course of the season, it is further indication of the step forward he's made in his game this term. Part of it is down to Sarri, the rest is because of the 27-year-old.

And Chelsea need him in this type of form, too. For one very good reason…

For all of Hazard's brilliance in the opening weeks of the season it has papered over one clear problem with Sarri's Chelsea: the strikers simply don't score often enough.

Whether it is Giroud (no goals in seven games) or Álvaro Morata (one goal in eight) leading the attack, the Blues are reliant on those around their frontman to win the game.

That isn't sustainable over the course of a season. Of course, goals will come but it's the regularly that remains in question.

Until – or perhaps if – Morata gets back on a hot streak, as he was when he first arrived from Real Madrid, it will be Giroud that leads the Blues line. He is a greater facilitator for Hazard, who admitted as much earlier this month.

“Olivier as a target man is maybe the best in the world; I think so,” the Belgian said. “When he gets the ball he can hold the ball and we can go in deep with him, so for us it’s a pleasure to play with him.”

No time to panic, Salah will rediscover Mo-jo

The 2017/18 Premier League campaign was, undeniably, the year of Salah. The Egyptian blitzed countless teams, scoring and creating goals on a weekly basis and claiming records along the way.

So understandably much was again expected of the former Chelsea man this term. But, by the incredibly high standards he set, Salah has fallen short in the opening weeks of the campaign.

The 26-year-old has only three goals in the top flight – which have come against West Ham United, Brighton and Hove Albion and Southampton – and has the two Premier League assists.

Could that be affecting him? Perhaps, although as the video below shows, his underlying numbers prior to the match at Stamford Bridge have actually improved on last season.

Yet against Chelsea there was a definite hurriedness to his game, perhaps down to a slight dip in confidence.

Twice in the first half he wasted chances from promising positions on the edge of the penalty area. And he lacked the same conviction to score after rounding Kepa, although Antonio Rüdiger was required to clear off the line.

However, at this point last season Salah had only four Premier League goals before exploding into his devastating form in November. So there is certainly no need for Liverpool fans to worry just yet.