It’s all been moving rather quickly at West Ham United.

Slaven Bilić’s future was under scrutiny for some time but the 4-1 loss to Liverpool was the straw that broke the camel’s back and he was let go.

Less than 24 hours after the Croatian’s departure, the Hammers had a new manager. David Moyes has been put in charge, signing a six-month deal at the London Stadium.

Following the 1-1 draw at home to Leicester City on Friday, West Ham sit 18th in the Premier League and look in real trouble. The former Everton boss has failed to pick up a win in his first two games and the Scot have to get working fast if he wants to keep them up.

And we've taken a look at five things the Moyes needs to do to transform West Ham’s season.

There’s no doubt that Moyes’ appointment is nowhere near a popular one. A poll on the Claret & Hugh fansite had more Hammers supporters voting for Bilic to stay rather than Moyes to come in.

The problem is that when you’ve failed in your last three jobs, as Moyes has at Manchester United, Real Sociedad and then Sunderland, your reputation is going to be at rock bottom.

Yet, following Sir Alex Ferguson at United was always going to be a tricky task. Even a man as confident in himself as Louis van Gaal struggled at Old Trafford and it’s taken José Mourinho to banish the fear that no-one could replace Fergie.

Real Sociedad was a bad move, as it clearly wasn’t his style of football, and not knowing the language didn’t help, while Sunderland was a poisoned chalice.

The football may have been bad at the Black Cats but Moyes was made promises by the board that they didn’t fulfil.

And he clearly knows there are people questioning his appointment – addressing those fears after today’s announcement.

He said: “I’ve managed five clubs since starting out nearly 20 years ago at Preston and then going to Everton. My period at Manchester United is well documented and I then did something I have always wanted to do by experiencing management abroad, with Real Sociedad.

“It's only been the last job where I feel it wasn't a good move and I didn't enjoy the experience. So I'm hungry to make sure I get things right now.

“I don't know any manager who hasn't gone through negative periods, especially in the game today. I hope it gives me great strength and understanding of what is required.”

Indeed, he underlined the importance of everyone coming together, adding: “I’m really looking forward to meeting the supporters, being in the stadium with them.

“I’m looking forward to seeing them getting right behind the team and my team also. We need the support, we need everyone with us. It’s a big job we have in hand now but I'm sure with everybody together we can get the right results between now and the end of the season.”

If he can’t get the supporters behind him, it could be over before its even started for Moyes at West Ham.

Get the board onside

It’s not just the fans whose support he’ll need, but that of the board too.

Moyes was clearly messed around at Sunderland and lost trust in those running the club, while the West Ham board clearly weren’t massive fans of Bilić.

When the transfer window closed, David Sullivan released a statement that basically threw the Croatian under the bus.

“Overall Slaven is happy with the business we have done during the summer transfer window,” he said. “We received the manager's wish-list before the window opened and we have managed to get the top four players on it.”

That meant that if things went badly, they’d positioned themselves so there was only one man to blame – Bilić.

Moyes has only been given a six-month contract, which suggests the board aren’t too convinced by him. And without that job security, it may be hard to get the players on board too.

There have been many stories published that the West Ham players were unimpressed with the lack of intensity in training.

Some where surprised to be given their normal day off when they could have been called in to be read the riot act after their demolition by Liverpool.

Bilić clearly didn’t impress a number of the West Ham players who featured under him, including Álvaro Arbeloa, who tweeted: “Better late than never” after news of his departure broke.

When Reece Oxford was on loan at Reading, Royals boss Jaap Stam said: “Oxford has been surprised at the level of intensity in training at Reading, compared to that at West Ham.

“Young players need to improve. You need to be on top of them and give them good advice, so that’s why training is intense.”

There’s no doubt that Moyes is a different animal to the Croatian and will take no prisoners if anyone believes they can relax like they did with their former boss.

West Ham have been accused of lacking pace and fitness, and the Scotsman will know he’ll need to step up the intensity to sort that out.

Perhaps this is linked to their fitness or lack of intensity in training, or perhaps Bilić wasn’t a big fan of his players running too far, but after 11 games, West Ham were second-bottom of the league in distance covered under their previous boss so far this season with 1162km – only Manchester United have run less.

By contrast, at the other end of the table, Bournemouth led the way with 1256km.

The Hammers were also bottom of sprints this season, with 4942, compared to Manchester City’s 6192.

While Bilić may not have thought it necessary, when a team is struggling at the bottom of the table, fans will want to see that they’re trying to turn it around.

Not running and not making sprints won’t help that, and it would be a surprise if Moyes doesn’t get his team slowly rising up those two rankings in the next few months. 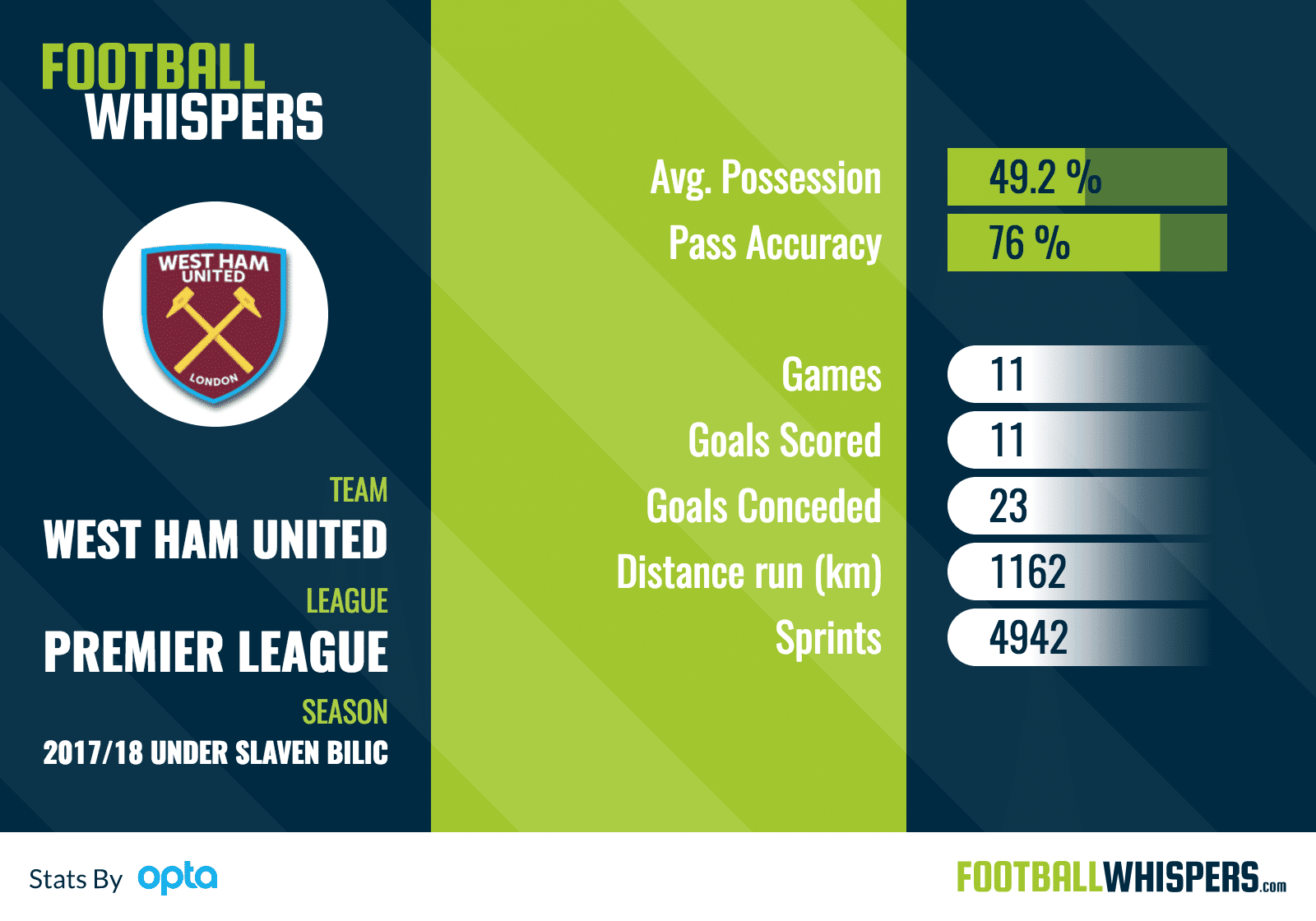 Find a formation and stick with it

No team has conceded more goals than West Ham this season in the Premier League.

The Hammers have had teams score against them 26 times so far in 2017/18 and not since 2006/07, when Fulham conceded the joint-highest 60 goals, has a side with the leakiest defence not been relegated from the top flight in England.

Moyes needs to shore up the backline and that will be done by consistency.

Moyes has set-up playing both 4-3-3 and 4-2-3-1 against Leicester and Watford, both quite similar systems, depending on the players picked to start

Moyes will need to decide on a formation and stick with it – no surprise it's one with four at the back, as he has played throughout his career.

With a stable backline and a squad playing in familiar roles, where they know where their team-mates will be, results should improve and the goals against them should stop flying in.