Stoke City live to fight another day in the Premier League after Liverpool huffed and puffed but failed to blow their house down at Anfield with the game finishing 0-0.

The Reds, who are now unbeaten in 55 home league games against Stoke, dominated proceedings from start to finish and had 20 efforts on goal to the visitors' four.

Yet just two of those hit the target and Liverpool were left clinging to referee Andre Marriner's failure to award them a late penalty for handball against Erik Pieters.

The point means Paul Lambert's side cannot go down this weekend, even if Swansea City, a place above them in 17th and having played two games fewer, pull off a shock and beat Chelsea at the Liberty Stadium this evening.

However, the Potters will need at least four points from their two remaining games – thanks to their inferior goal difference – if they are to extended their Premier League stay into an 11th year.

For Liverpool the result is largely inconsequential. Champions League qualification is all but secure as fourth will be enough to secure group stage place this season and the Merseysiders are nine points clear of fifth-placed Chelsea as things stand.

But what did we learn from the stalemate at Anfield? Tom Bodell has the answers…

With Liverpool taking a 5-2 lead to Roma for the second leg of their Champions League semi-final on Wednesday this game was low on Jürgen Klopp's list of priorities, and with good reason.

With Juventus transfer target Emre Can joined in the treatment room by Alex Oxlade-Chamberlain following the first leg, the Reds are short of numbers in midfield.

James Milner‘s importance to the side was underlined by the fact he, along with Dejan Lovren and Andy Robertson, was given a substitute roles while Sadio Mané got the afternoon off completely. In came Joe Gomez, Ragnar Klavan and Danny Ings.

Clearly Klopp feels his side will have to go to the Eternal City and get something to secure their Champions League final place. Given the Italians' remarkable comeback against Barcelona in the previous round, that looks a shrewd call.

Come kick-off Moreno reverted to left-back, Klavan moved inside to partner Virgil van Dijk at centre-half and Gomez shifted out to the right. That left Trent Alexander-Arnold free to play of the right of a midfield three.

The 19-year-old has enjoyed a superb breakthrough season, showing remarkable composure on top of his abundance of quality. And he turned his hand to another new role impressively against Stoke. 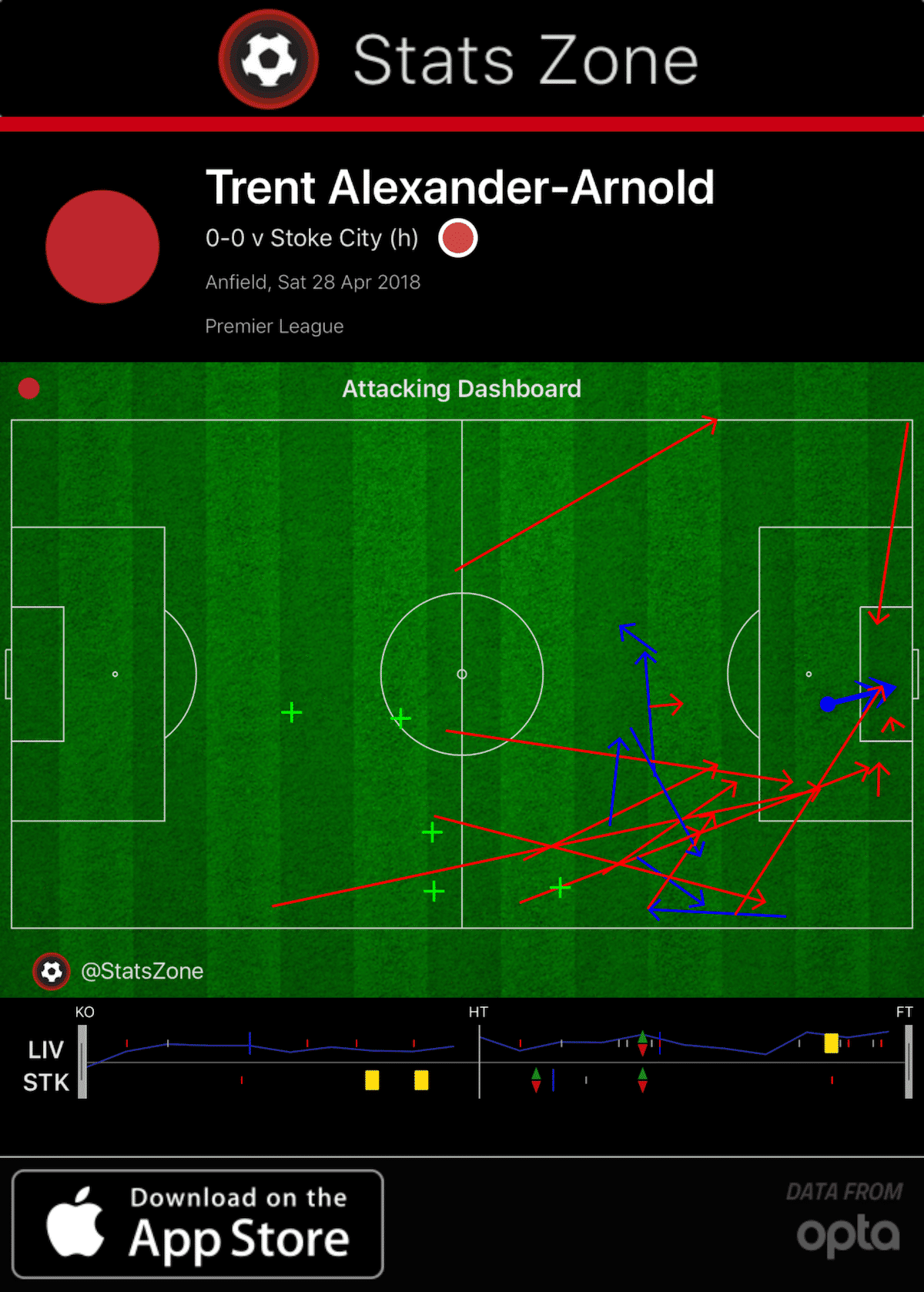 With the ball the Reds' 4-3-3 morphed into 3-4-3 with Moreno pushing forward into midfield and Gomez tucking in to play at centre-back.

But it was Alexander-Arnold who impressed the most, driving forward at every opportunity and creating a double threat with Salah which Stoke left-back Erik Pieters simply could not live with.

There has been almost as much written and said about Liverpool's goalkeeping position this season as their problems at centre-back. Even since Loris Karius was promoted to No.1 in preference to Simon Mignolet the Merseysiders have continually been linked with goalkeepers.

First it was Roma's Alisson, then it was Stoke's Jack Butland and, most recently, Barcelona back-up Jasper Cillessen has been subject of Liverpool transfer rumours.

So today's clash at Anfield presented Butland with the perfect chance to audition for the right to be Liverpool's No.1 next season. But he did not take it. In fact, he unequivocally proved he is not yet ready to make the leap to a top-six club.

From as early as the eighth minute the England international looked shaky, passing the ball along the ground and straight out of play under no pressure whatsoever.

Later in the first half he horribly misjudged Alexander-Arnold's searching through ball, spilling into the path of Mohamed Salah on the edge of his penalty area. And, in stoppage time, he made hard work of collecting a dipping cross, taking more than one attempt to grasp the ball firmly.

Liverpool's search for a new No.1 continues.

There will be a changing of the guard at Stamford Bridge this summer when Antonio Conte departs after two seasons.

But the Italian will not be the only one moving on as the Blues fight to get back in the Champions League. Much has been made of their loan army but one name which has scarcely been mentioned is that of Kurt Zouma.

The Frenchman starred during the 2015/16 campaign, making 23 Premier League appearances before a serious knee injury curtailed his progress. Loaned to Stoke for the season, the 23-year-old has been afforded regular football once more.

Positioned at right-back until Moritz Bauer took over following injury to Joe Allen, Zouma was at his imperious best at Anfield, halting the progress of Ings and Moreno down the left-hand side time and time again.

In fact, no-one made more blocks than Zouma's three while he also made two interceptions and eight clearances for the Potters.

Despite enjoying just 28 per cent of the ball and making a paltry two passes into the Liverpool penalty area, Stoke were in the game throughout. The Potters did not force home keeper Karius into a save of note but still had their moments.

Mame Biram Diouf could have done better with a header at the back post while former Reds forward Peter Crouch almost got on the end of Xherdan Shaqiri's cut-back soon after.

They only had one opportunity in the second period, but it was the game's best. With Karius off his line Diouf pulled the ball across the face of goal to the back post where skipper Ryan Shawcross was unable to stab into an empty net.

But those misses, and the subsequent lack of opportunities, are the story of Stoke's season and indicative of the Premier League's joint-fourth lowest scorers (32).

With an xG of 34.25, Stoke cannot even suggest poor finishing has let them down this season. They are only just tracking below where they should be, meaning they are not creating enough good-quality chances.

They won't go down today, but it is only a matter of time. The writing has been on the wall for some time.