Lionel Messi reached 100 Champions League goals as Barcelona dumped Chelsea out in the last 16 with a 3-0 (4-1 on aggregate) win at the Camp Nou.

The Argentine genius ensured the Blues were up against it from the outset by scoring his first after three minutes, drilling through the legs of Blues keeper Thibaut Courtois after collecting Luis Suárez's pass.

Ousmane Dembélé doubled the Catalans' lead in the 20th minute, lashing into the top corner after being picked out in space by Messi, to register his first goal for the Blaugrana.

Chelsea were much improved after the break and might have been awarded a penalty for a foul on Marcos Alonso. But Antonio Conte's side failed to take their chances and were punished soon after.

Again it was Messi, and again it was through Courtois' legs. This time he drove into the box from the left before leaving Chelsea's No.1 red faced with another impudent finish.

But what did we learn as Chelsea became the third English team to crash out the Champions League this season after Manchester United and Tottenham Hotspur?

Conte has backed record signing Álvaro Morata vociferously during his lean run. Arguably, at £60million, he had little choice in the matter. But when it came to the crunch and Chelsea's biggest game of the season to date, he plumped for January signing Olivier Giroud to lead the line.

The Frenchman has had to be patient, making just two Premier League starts in the six weeks since completing his move from Arsenal, but Conte clearly felt Giroud offered the Blues something different to Morata in Spain – a big call given his pedigree as a former Real Madrid player.

But the Blues did not make enough of Giroud's presence. In 67 minutes the French international had just two touches in Barcelona's penalty area as the visitors struggled to get a foot-hold in the game.

That was evidenced by Giroud's touch map (below) via WhoScored. The 31-year-old did as much of his work outside the penalty area as in it. That is a waste of such a good finisher and the distinct lack of service will have frustrated the Blues' No.18. 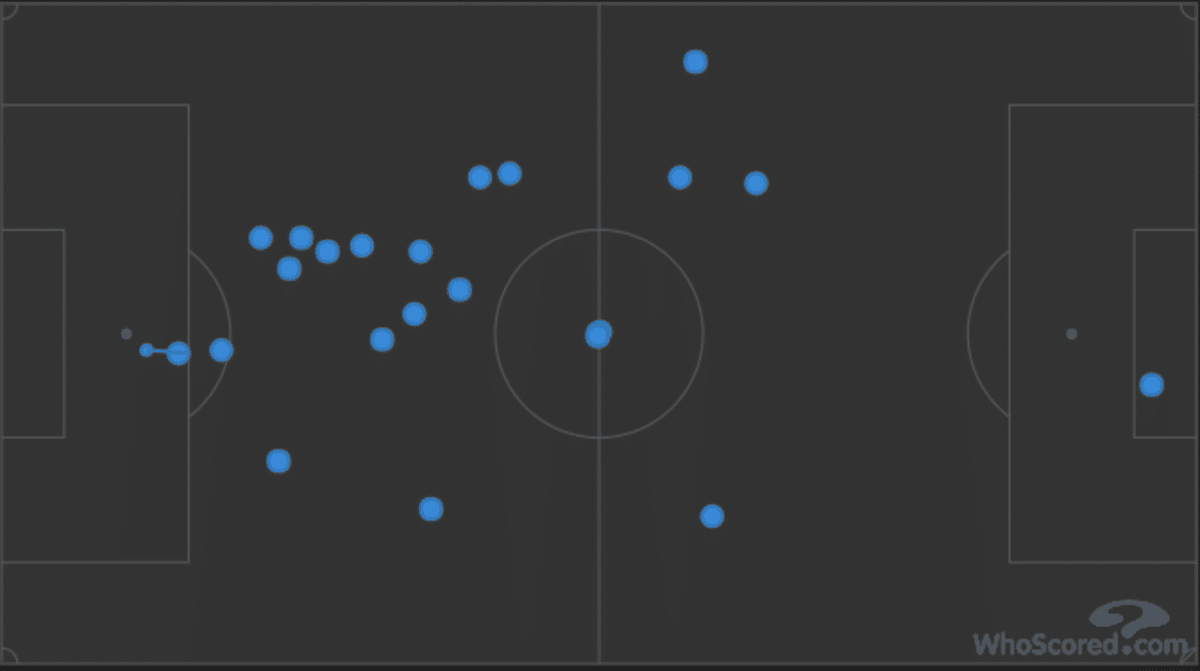 While Chelsea's striking department continues to give Conte headaches, the forwards tasked with playing behind either Morata or Giroud present no such problems.

Eden Hazard is one of the world's best players and, if reports are to be believed, a long-term Real Madrid transfer target. Pedro has overcome a slow first season in England to become an integral part of the squad. For a while that looked to be at the expense of Willian.

But the Brazilian is Chelsea's comeback kid and he has seen off the challenge of the former Barça forward to become Conte's go-to man in recent weeks.

Against Barcelona he was the Chelsea player who caused the Catalans the most problems, undertaking ten dribbles – more than anyone on the pitch – while running at both full-backs.

His endeavours were not rewarded, but he was the Blues' best attacker and his recent performances mean he will be an important part of the squad next season – whoever is in charge.

Kanté shows he can mix it with the best

Before this season N'Golo Kanté had never played in the Champions League. After winning the Premier League with Leicester City the diminutive ball-winner joined Chelsea when they were out of Europe altogether.

So this was the French international's first test of Europe's premier competition. You would not have known it. Unsurprisingly he was asked to get through plenty of work at the Camp Nou and he duly obliged, scurrying from side to side, winning the ball back.

With four interceptions and eight tackles (below), the former Caen midfielder won possession back more than any player on the field. 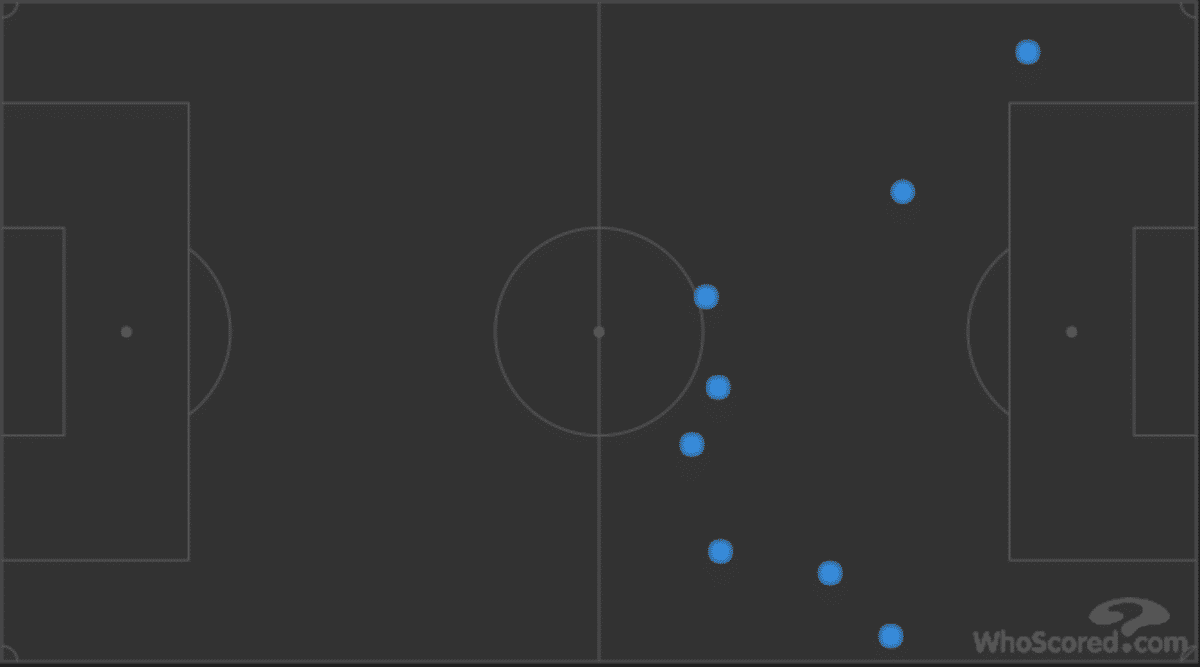 It's been a tough first season at Barcelona for Dembélé. After becoming the second-most expensive player of all time after Neymar, the former Borussia Dortmund wide-man was ruled out with a hamstring injury on his first start for the Catalan club.

Barça went from strength to strength despite losing their €105million man for four months, changing shape to 4-4-2 in favour of their more traditional 4-3-3. It meant when Dembélé finally returned from his lay-off in the new year there wasn't a natural spot for him in the team.

But the 20-year-old has gradually worked his way back to full fitness, picking up assists against Girona and Málaga to earn a start against Chelsea.

From the outset he caused Antonio Rüdiger – stationed on the left of the visitors' back three – problems and all but killed the tie off after 20 minutes by arrowing a shot into the top corner.

There had been talk the former Rennes starlet would spend next season away from the Camp Nou. Dembélé has been subject of Arsenal transfer rumours in recent weeks while there have been suggestions he could be a makeweight in the deal which will see long-term Barcelona transfer target Antoine Griezmann join from Atlético Madrid.

On this evidence Valverde will re-asses and be keen to hold onto him.

We certainly didn't ‘learn' that Messi is a phenomenon tonight. That has been clear for a decade. But you can't ignore the Argentine's impact on the game or overstate his importance.

The Barcelona No.10 had never scored against Chelsea prior to the last-16 of this season's Champions League. But that is another statistic he has consigned to the history books after bagging three times over the two legs.

Although Barça controlled the first half they were on the back foot in the second until Messi darted into the visitors' penalty area and slotted home his 100th Champions League goal from just 123 appearances in the competition.

He was the difference maker, yet again, drifting between the lines, forcing players to think and pulling Chelsea defenders out of position. Messi completed six of his nine dribbles, more than anyone else, scored with two of his three shots and completed 38 of 45 passes.

His first owed a little to luck as the ball bounced off a Blues defender and back into his path but his second was vintage Messi, collecting a pass before gliding into the box to net.

The assist sandwiched between his two strikes was every bit as impressive, running at Chelsea's backline after Barça old boy Cesc Fàbregas lost the ball before sliding the ball across the edge of the box for Dembélé to drive home.

In a 3-0 win for Barcelona his part could easily be taken for granted. But that's the last thing we should be doing.