Tottenham Hotspur progressed to the Carabao Cup semi-finals by beating rivals Arsenal 2-0 – just their second win in 17 visits to the Emirates Stadium.

Mauricio Pochettino's side will now face Chelsea in the last four in a bid to reach the season's first domestic final. The other semi-final sees holders Manchester City face League One side Burton Albion.

Spurs were the more dangerous side for long periods. While they didn't dominate proceedings at the Emirates, they took their chances when on top to avenge memories of their 4-2 Premier League defeat at the same venue on December 2.

Heung-min Son opened the scoring after 21 minutes, latching onto Dele Alli's superb ball over the top before curling past Petr Čech into the bottom corner. The visitors doubled up 11 minutes into the second half when, moments after his introduction, substitute Harry Kane picked out Alli who lofted the ball home on the run.

So high are the standards Alli has set since trading League One side MK Dons for Tottenham Hotspur that he is rarely far from criticism these days. Yet the England midfielder was at his very best at the Emirates, assisting the first and scoring the second to send his side through to the semi-finals.

It was Alli's vision which made the first, lifting an inch-perfect ball into the path of Son, before making a trademark run in behind ended with him lifting home the visitors' second after the break.

On form, Alli is arguably England's best midfielder when it comes to making things happen in the final third. But this season we have witnessed a different side to his game, affecting matches in deeper areas – as outlined below in his heat maps from this season and last. 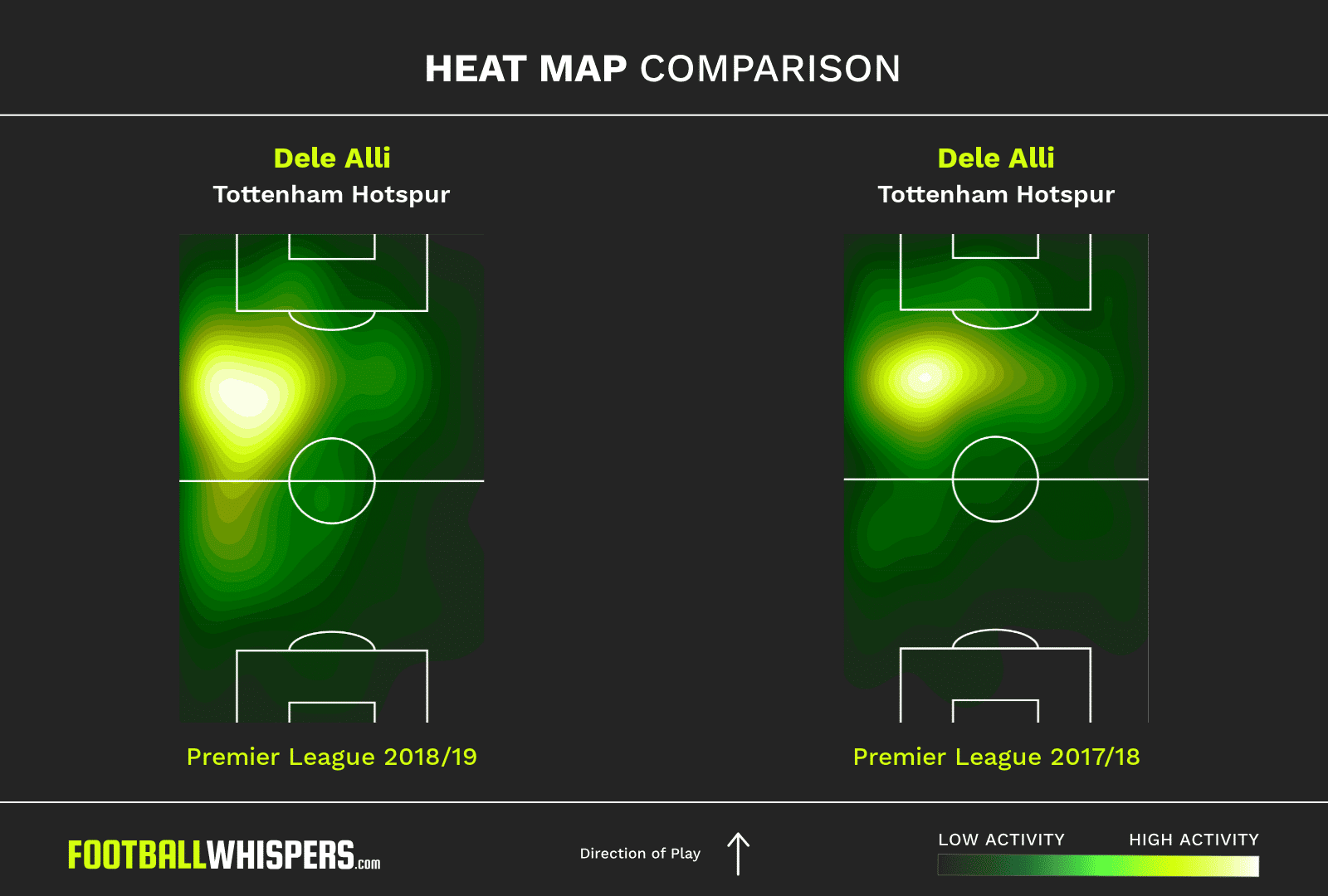 The stats back this up. This term Alli is averaging 2.29 tackles per 90 vs. 1.39 last season. The number of interceptions he makes is up too, from 0.72 per 90 to 1.63. In short, he's doing significantly more defensive work for the North Londoners.

All of which leaves Pochettino with a dilemma: does he want the Alli who plays as an eight-and-a-half, drifting between the lines, causing chaos, creating and scoring on a weekly basis? Or does he want a more rounded player contributing on both sides of the ball?

Decisions, decisions. But a nice dilemma to have.

With Rob Holding (ACL) sidelined for the rest of the season and Shkodran Mustafi (hamstring) out at present too, Arsenal boss Unai Emery rang the changes for Tottenham's visit with Granit Xhaka dropping back into defence.

But Spurs boss Pochettino clearly had a plan to get in behind the hosts' mix-and-match backline and it worked to a tee. Time and time again the Gunners were vulnerable on the counter and Tottenham got in behind.

Even after switching to a back three when Laurent Koscielny came on, the hosts were susceptible to direct balls in behind and Kane's sumptuous pass over the top picked out the run of Alli to finish off with a dinked effort beyond Čech.

Alli, in particular, made hay with penetrating runs throughout and his impudent finish was a just reward for a fine display in which he caused havoc in the Gunners' defence time and time again. 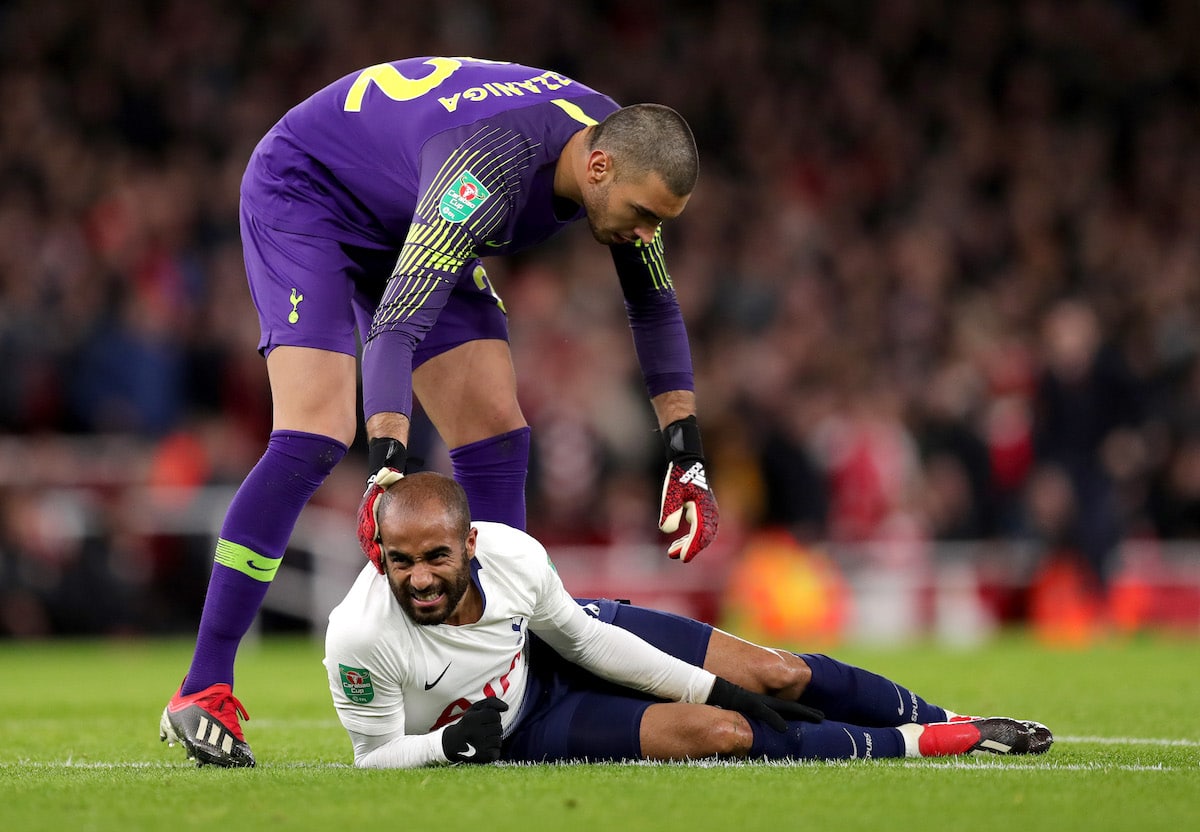 Plenty has been written and said about Tottenham's goalkeeping situation this season – largely due to Hugo Lloris' worrying lack of consistency and off-field problems.

However, Paulo Gazzaniga's display for Spurs in tonight's Carabao Cup quarter-final win underlined the strength the North Londoners boast between the sticks.

The Argentine has impressed before when deputising for Lloris and while it is clear he has overtaken Michel Vorm to become the Frenchman's undisputed understudy, he has yet to usurp Tottenham's captain.

That might still be some way off but, in Gazzaniga, Spurs do have one of the Premier League's best backup keepers.

He was at his very best at the Emirates twice in the first half with the game goalless, thwarting Henrikh Mkhitaryan after he went through one-v-one before pushing Aaron Ramsey's fierce first-time strike onto the post.

Instead, he went with the strongest XI he possibly could – with the exception of Kane who was spared a start after suffering from illness in the build-up to the game.

Given Spurs are battling on three fronts at present after squeezing through to the Champions League last 16, and the Carabao Cup is most top teams' lowest priority, it was a testament to Pochettino's desire to deliver silverware that he named such a strong side.

The identity of Tottenham's opponents could well have played a part in his selection policy. After blowing the lead to lose 4-2 in the season's first North London derby at the start of December, Pochettino would have been out for revenge too.

Either way, it made for a refreshing change to see an elite manager taking the Carabao Cup this seriously and if he can finally deliver the silverware Tottenham fans crave, the decision will be more than vindicated. 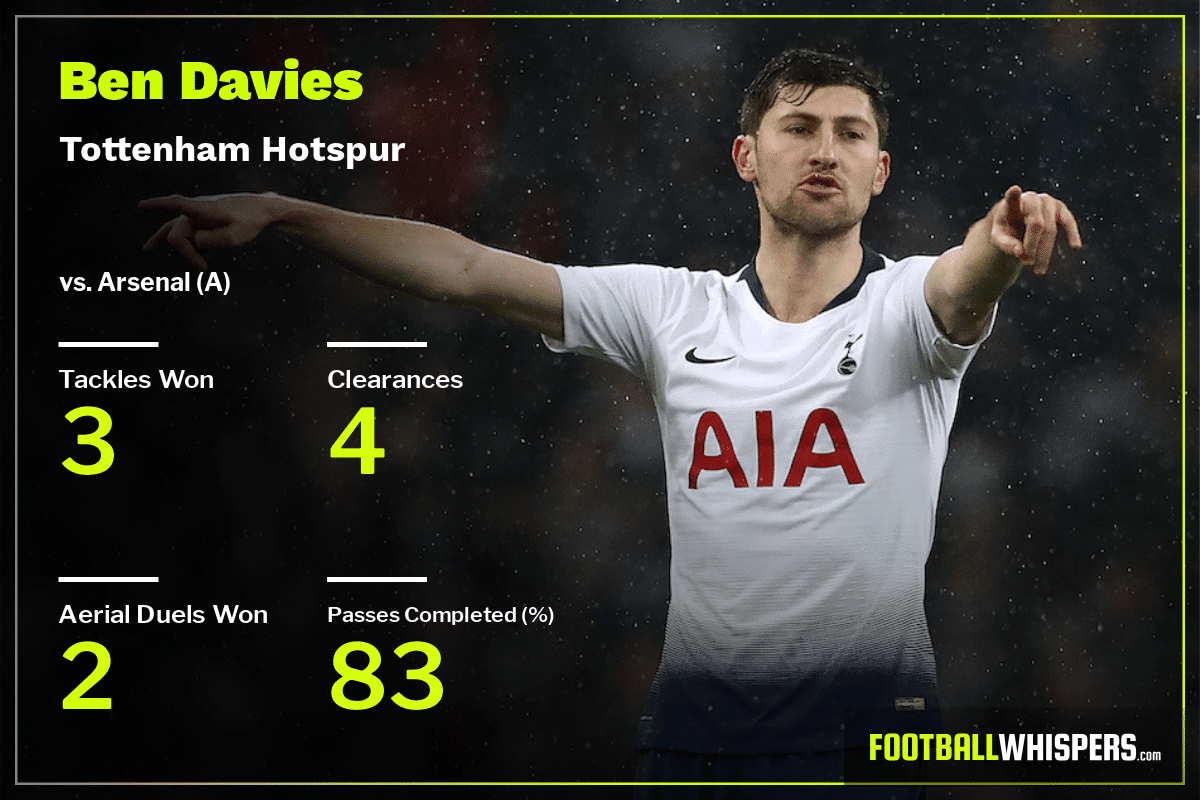 With Sánchez and Vertonghen ruled out and Foyth only fit enough for a spot on the bench, regular left-back Ben Davies moved inside at the Emirates and put in an assured display in his secondary position.

The Welshman is no stranger to playing at centre-back, though, despite making the No.3 shirt at Tottenham his own in the last two seasons. For Wales he has regularly played as part of a back three as a left-sided centre-half with former Swansea City team-mate Neil Taylor outside of him.

Davies slotted in seamlessly alongside Toby Alderweireld tonight. In fact, to the casual observer, it would not have been obvious the 25-year-old was filling in there at all.

His awareness, reading of the game and positioning make Davies an ideal candidate to play at centre-back and, if Foyth is not ready for Sunday's trip to Everton in the Premier League, Pochettino could do worse than deploying the Welshman there once more.