Alexandre Lacazette secured a 1-1 draw and a late birthday present for Arsenal boss Unai Emery at home to Liverpool – a result which extends the Gunners' unbeaten run to 14 games.

In an end-to-end encounter at the Emirates Stadium it was the Reds who took the lead in the 61st minute when James Milner rifled into the empty net after Bernd Leno palmed a Sadio Mané cross straight into his path.

Liverpool could count themselves somewhat fortunate to have taken the lead and were pegged back in the 82nd minute when Lacazette latched onto substitute Alex Iwobi's delicious slide-rule pass and lured Alisson off his line before firing home.

Arsenal had been the better side for periods of the first half but lost their momentum in the second half before Milner put the visitors ahead.

Emery responded by replacing Henrikh Mkhitaryan with Iwobi seven minutes after Liverpool took the lead and it was the Nigerian international, dropped in favour of the Armenian, who supplied the assist for Lacazette.

Arsenal improved almost immediately and with Aaron Ramsey on in place of Pierre-Emerick Aubameyang – whose influence waned after the first half an hour – the hosts put on the pressure which led to Lacazette's equaliser, his seventh of the season in all competitions.

Between them Liverpool's front three of Roberto Firmino, Mané and Mohamed Salah did not manage an effort on target.

Firmino (3 shot), Salah (3) and Mané (1) all failed to hit the target and it was little surprise that centre-back Virgil van Dijk (0.39) had the highest xG of any Reds player, per Understat.

When we consider that Liverpool completed just 64 passes in final third it's hardly surprising. They were starved of service and the pass map below, courtesy of Stats Zone, shows that the Reds struggled to get the ball into the penalty area throughout the game. 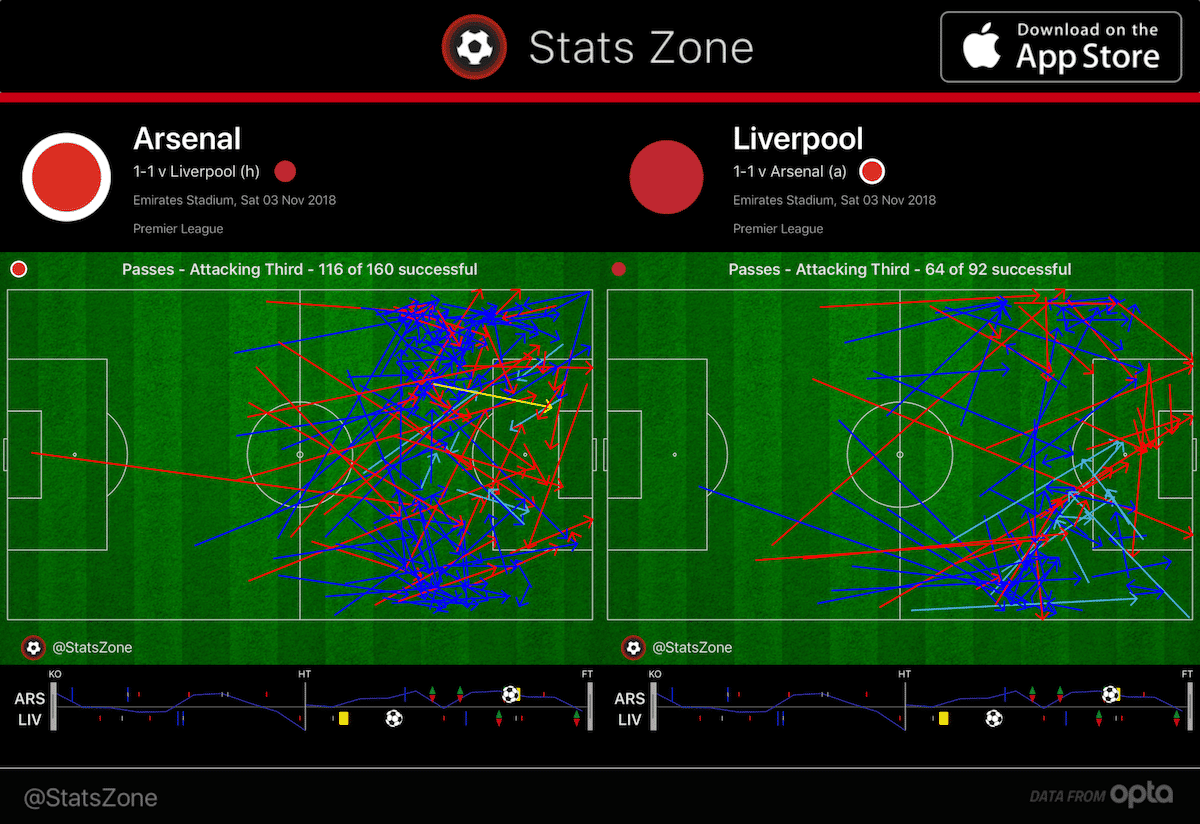 Between them they have 13 Premier League goals this season, so reports of their demise are somewhat exaggerated. At this stage last season they'd struck 13 times in the Premier League also with Salah accounting for six of those.

Perhaps, then, they are being judged against their second half to last season when they were electric. That is to be expected and, to some degree, reasonable too.

Jürgen Klopp will point to his side's new-found defensive resilience and ability to ability to grind out results – as they'd been ten minutes away from doing at the Emirates – in order to deflect.

But the Liverpool boss will be as desperate as anyone to discover the solution – sooner, rather than later, too.

Left-back has to be Emery's January priority

It could be said left-back has been something of a problem position for Arsenal ever since – whisper the name – Ashley Cole left for Chelsea in 2006. For a while Kieran Gibbs looked to be the answer before fading away.

Nacho Monreal is now 32 and has missed the Gunners' last four – including today's clash with Liverpool – through injury. In that period Stephan Lichtsteiner, Granit Xhaka and now Sead Kolašinac have all filled in with varying degrees of success.

Lichtsteiner, at 34, is someone with a been-there-done-that attitude and a medal collection to prove it. He is not expected to play week in week out. And that's without acknowledging the Swiss veteran is actually a right-back by trade.

Xhaha has enjoyed a new lease of life in midfield next to new-boy Lucas Torreira and Kolašinac, only just back from injury himself, has failed to build on a bright start to his Gunners' career. He switches off too easily and was very nearly caught out when Van Dijk peeled off him at a corner in the second half, planting his header wide.

None, therefore, are the long-term answer and that is something Emery will want to address as soon as possible.

One of the biggest successes of Emery's tenure is the improvement in Xhaka's game. The Swiss midfielder was viewed as something of a laughing stock last season with pundits regularly taking a swipe at him for his lack of defensive nous.

But that isn't the former Borussia Mönchengladbach man's game and his Player Persona Radar (below) indicates as much with build-up passing statistically the biggest part of his game.

True to form Xhaka completed 84 of 97 passes against the Reds with 17 of those coming in the Gunners' attacking third. No-one from either side attempted or comopleted more and only Mesut Özil (22) managed more in the final third.

With Torreira alongside him winning the ball back the 26-year-old is finally making good on his promise.

When Arsenal spent some £19million on Bayer Leverkusen stopper Bernd Leno the expectation was the German would take the No.1 spot from veteran stopper Petr Čech.

That all changed when Čech was injured in the 2-0 win over Watford at the end of September. Since then Leno has held onto his place, even with Čech returning to the bench for the 2-2 draw at Crystal Palace last Sunday.

But, even before his part in Liverpool's opener, he was unconvincing at the Emirates. On more than one occasion he flew out in an attempt to claim balls into the box he was never going to win, putting his defence under needless pressure.

And when the goal came he provided the ‘assist' for Milner by lunging off his line to palm the ball invitingly into the path of the former Manchester City midfielder. Čech, who had impressed in the early weeks of the season, would have been forgiven for being inwardly pleased.