For five years Real Madrid escaped through the group stages of the Champions League without facing defeat. That stopped on Wednesday night as Tottenham Hotspur handed them a comfortable 3-1 thumping at Wembley Stadium.

The Spanish side, coming off the back of a 2-1 loss to Girona, looked sloppy, lethargic and unmoved by their poor form.

Spurs took advantage and put the competitions holders to the sword.

A double from Dele Alli either side of the half was well-deserved and Christian Eriksen made it 3-0 when Harry Kane did extremely well to slip the Dane in with 25 minutes to go.

Real’s unbeaten record is over and with ten points Spurs have qualified for the last 16 of the Champions League and no one remembers when playing at Wembley was deemed as a curse.

Delicious Dele At The Double

Welcome to the Champions League Mr Alli. After having to miss the first three group games due to his red card in the Europa League last term, Alli finally made his debut in this year's competition and it was worth waiting for.

Early on, it was clear his superb movement, bursting into the box, given freedom playing up beside Kane, was going to cause problems.

Kieran Trippier nearly picked him out early on with a low powerful cross, later they would link up to great effect for the opener.

With Kane struggling and obviously not 100 per cent, it was Alli making the runs, pressing the defence, doing the dog work and his efforts were key to the win.

The England midfielder got lucky with the deflection for the second, but you make your own luck. He didn’t panic in possession, took his time, made room for the shot and watched it fly into the net.

His versatility is astounding. He can play deeper in the middle, run off the main striker or even lead the line himself. That is priceless for his manager and will take him all the way to becoming a world-class player.

He may have missed the opening three games, but he certainly made up for lost time at Wembley.

To Kane Or Not To Kane

All the pre-game questions were over the fitness of Harry Kane. Pochettino decided to start the England striker after he missed the defeats to West Ham United and Manchester United.

Last week, the pace of the 24-year-old troubled the Real back four, but it was clear to see, despite his effort at chasing down defenders, he wasn’t quite at his best.

Starting up with Alli beside him, he gave the Spanish defensive problems, but with just 21 touches in the first-half – Toby Alderweireld who came off after 23 minutes had 16 – you could sense it was a case of less is more for the striker.

Kane led the line valiantly, and deserves lots of praise for the shift he put in despite being short of full-fitness.

For the third goal, the striker made a good run, but knowing he couldn’t get past Nacho for pace, he checked, looked up and picked up Eriksen for the finish.

Hopefully there will be no side-effects of playing the forward, because Spurs are a better club, regardless of Kane being less than 100 per cent.

Trippier Up With The Best

Some Spurs fans were upset when their club agreed to sell Kyle Walker to Manchester City for over £50million, but there’s little doubt anyone is still harbouring regrets.

Another stunning performance from Kieran Trippier on Wednesday asks the question. Is there a better full-back in football at the moment?

Serge Aurier signed in the summer from Paris Saint-Germain, but when the Ivorian doesn’t start, Trippier does and he looks as good as anyone else in his position.

Before his fizzing cross for Alli’s goal, he tried a similar pass, coming close to pulling it off.

He has the pace to get up and down the flank, he’s blessed with a wonderful right-foot and a great attitude to boot. 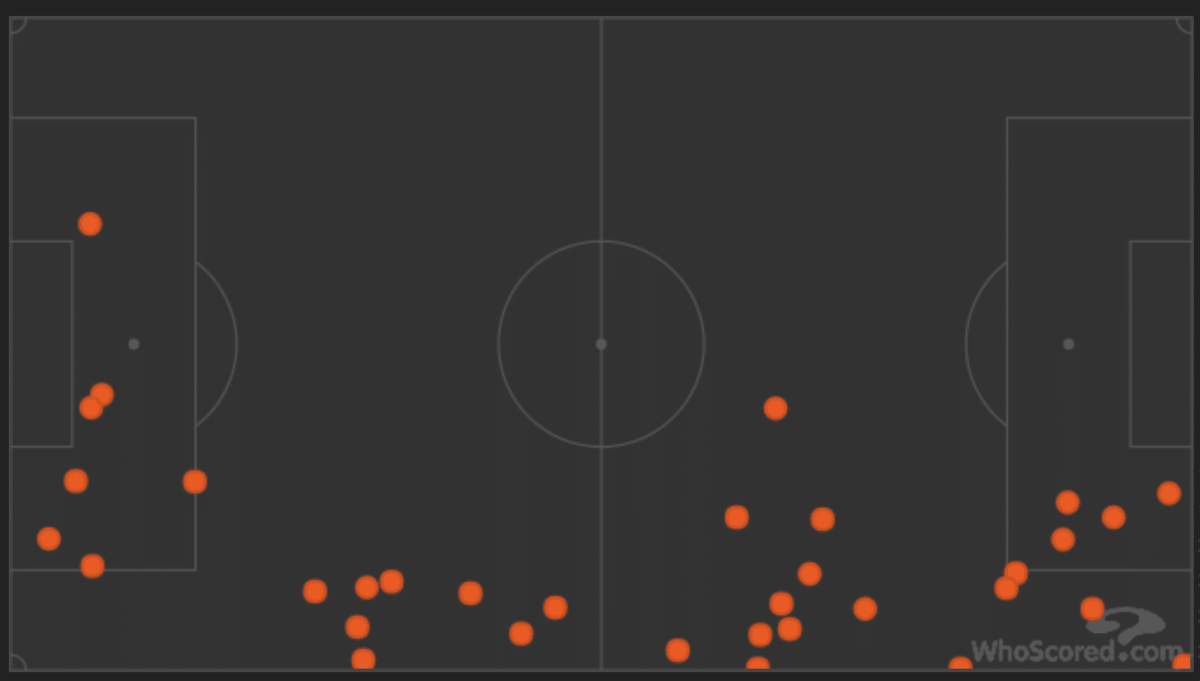 His 34 touches in the opening half was only bettered by Ben Davies on the opposite flank, but it’s the former Burnley man’s ability to get forward and create chances that sets him apart. By the end of the 90 minutes no one had seen the ball more than Trippier.

Real went 3-5-2 to match the home side in the second half, handing Marcelo the chance to push forward. It did mean Trippier had to defend more, but it only helped solidify just how good a full-back he can be.

Watching Harry Winks pass the ball confidently around the Wembley turf could be something we get to see for the foreseeable future.

England boss Gareth Southgate was in the stands to witness Spurs victory and he would have been extremely impressed with the 21-year-old midfielder.

There was a time when Victor Wanyama and Mousa Dembélé looked untouchable in the heart of the midfield, but now, Pochettino would be reluctant to remove his young star.

Trippier may have been offside, but Winks long pass out wide for the opening goal was perfect in the build up. The right-back will get the credit, but precision and vision from Winks was superb.

He may have only played 65 minutes, but with another 20 minutes on the clock he had still completed more passes than anyone else in his team.

Winks is the player who links all the passing together, the team’s metronome and a vital cog in this 3-5-2 formation.

Adding one tackle and two clearances, it was a great all-round showing for the youngster and it increasingly looks like he is becoming another young gem in this exciting Spurs side.

When Anthony Martial sprinted beyond Eric Dier to fire in the winner against Spurs on Saturday, many wondered if Pochettino’s side would have been better and stronger with Davinson Sánchez in the starting XI.

He was brought back in for Wednesday’s clash and the Colombian didn’t let his Argentine boss down.

An assured and confident performance, he coped with everything Real threw at him.

Even when the Spaniards changed to 3-5-2 and Marcelo was allowed to bomb forward, both he and Trippier adjusted.

He finished the game with one interception, four clearances, one blocked shot and didn’t make one foul during the entire game.

Alderweireld had to go off with a knock in the first half, suggesting that the 21-year-old will be a fixture in the first-team for a while yet, it may be earlier than Pochettino would have planned, but Sánchez looks every part the starter.