Kevin de Bruyne returned to Stamford Bridge to haunt his former employers. The Belgian midfielder lashed home a left footed effort from distance to break the deadlock in the second half and give Manchester City a deserved lead.

Chelsea were under the cosh for the majority of the match with Antonio Conte getting his tactics wrong. His decision to bring Willian on to replace the injured Àlvaro Morata resulted in his side having no focal point and they weren't able to bring others into play, much to the frustration of the returning Eden Hazard.

Pep Guardiola, on the other hand, got his tactics spot on and his side are now once again sitting top of the Premier League.

City played with the authority of a home team. Conte often sacrifices the ball, putting trust in his defence, but it was different this time around. The home side were relying on last gasp challenges to keep Guardiola's side out. They struggled with the wave after wave of relentless City pressure and were often left chasing shadows.

It was a real eye opener to those doubting City's title credentials. They looked ominous going forward even without Sergio Agüero and fairly solid in defence even without Vincent Kompany marshalling the backline.

Here are things tactical takeaways from the match. 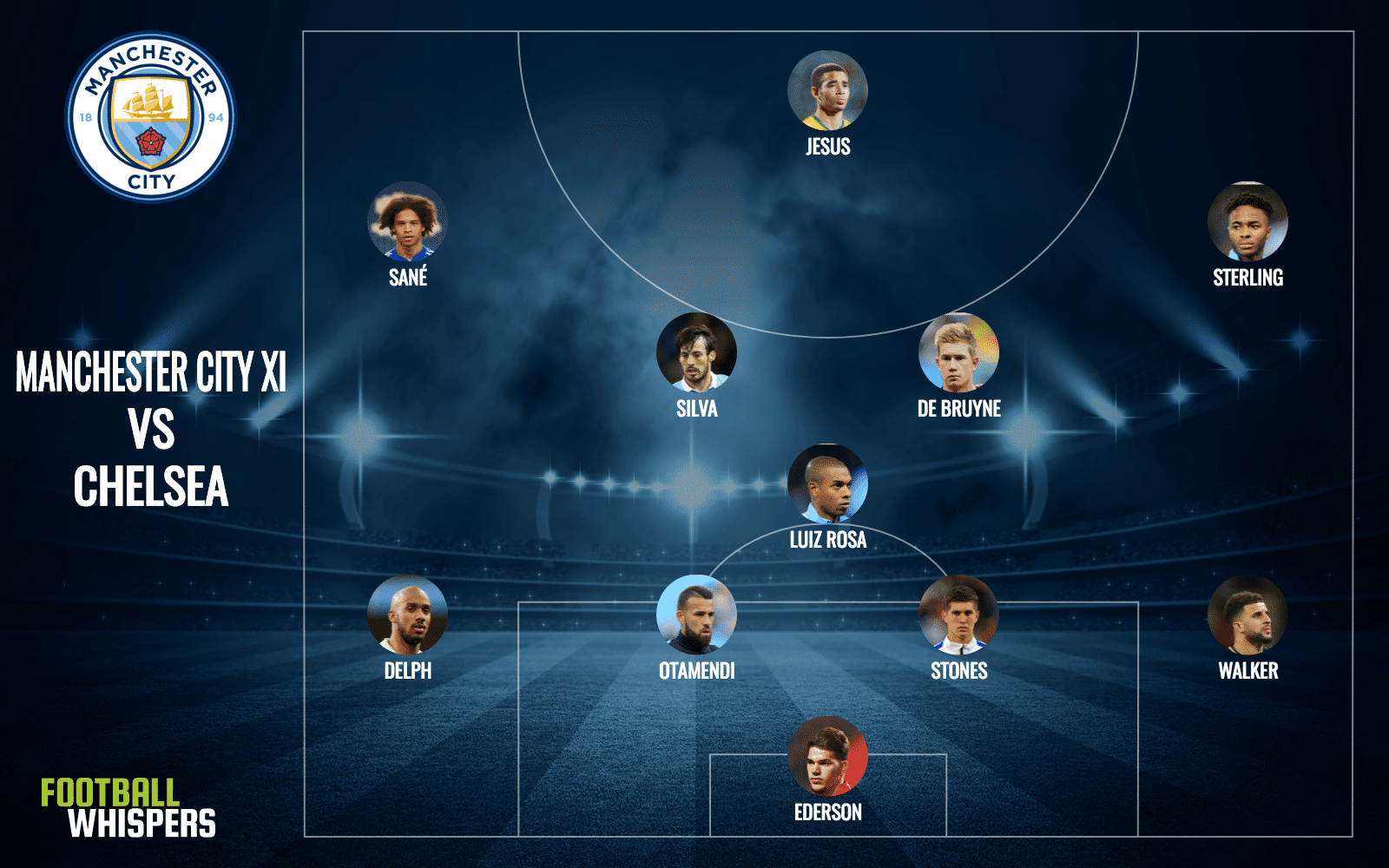 Man City can cope without Agüero

For a lot of teams being without their top goal scorer would be an issue. For City, however, not so much. They created chances, tested Thibaut Courtois and continuously caused Chelsea problems.

City pressed high and in many ways it was more of a stereotypical Guardiola forward line. That's perhaps why it looked as natural and normal as it did.

Gabriel Jesus didn't have a clear cut chance but he did grab an assist for the de Bruyne strike and looked generally lively. He linked well with the midfielders as well as the supporting cast.

The Brazilian's best opportunity to add to his give goals this season arrived with five minutes to play when his perfectly weighed volley was headed off the line by Antonio Rüdiger.

Against inferior opposition there's no doubt he'll continue on his scoring streak in the absence of his Argentine strike partner.

Delph is more than a makeshift left-back

It’s been a remarkable week for Fabian Delph. He started the Champions League match against Shakhtar Donetsk and got the nod over Danilo to start at left-back today in place of the injured Benjamin Mendy.

To Pep Guardiola the full-back position is a key area. He wouldn't use a player there that he didn't implicitly trust.

They're not only tasked with offering the width like many in the Premier League, the Catalan-born manager also encourages them to drift into central areas and impact proceedings there. At times almost acting like a central midfielder alongside the deeper sitting Fernandinho.

It's why he uses a Sterling on the right of the attack and Sané on the left, so that they stretch the play if necessary whereas other managers would have them on opposite sides allowing them to cut in field onto their stronger foot.

Delph being a natural midfielder obviously influenced Guardiola's decision to start him over Danilo, a did the fact he's naturally left footed, but, one again, he did more than enough to justify starting for the title hopefuls.

He stood out in the first half. He had more touches than any other play (60), completed 95.7 per cent of his passes. He finished the match having a 100 per cent tackle success rate (five from five) and made three interceptions.

Good day at the office. 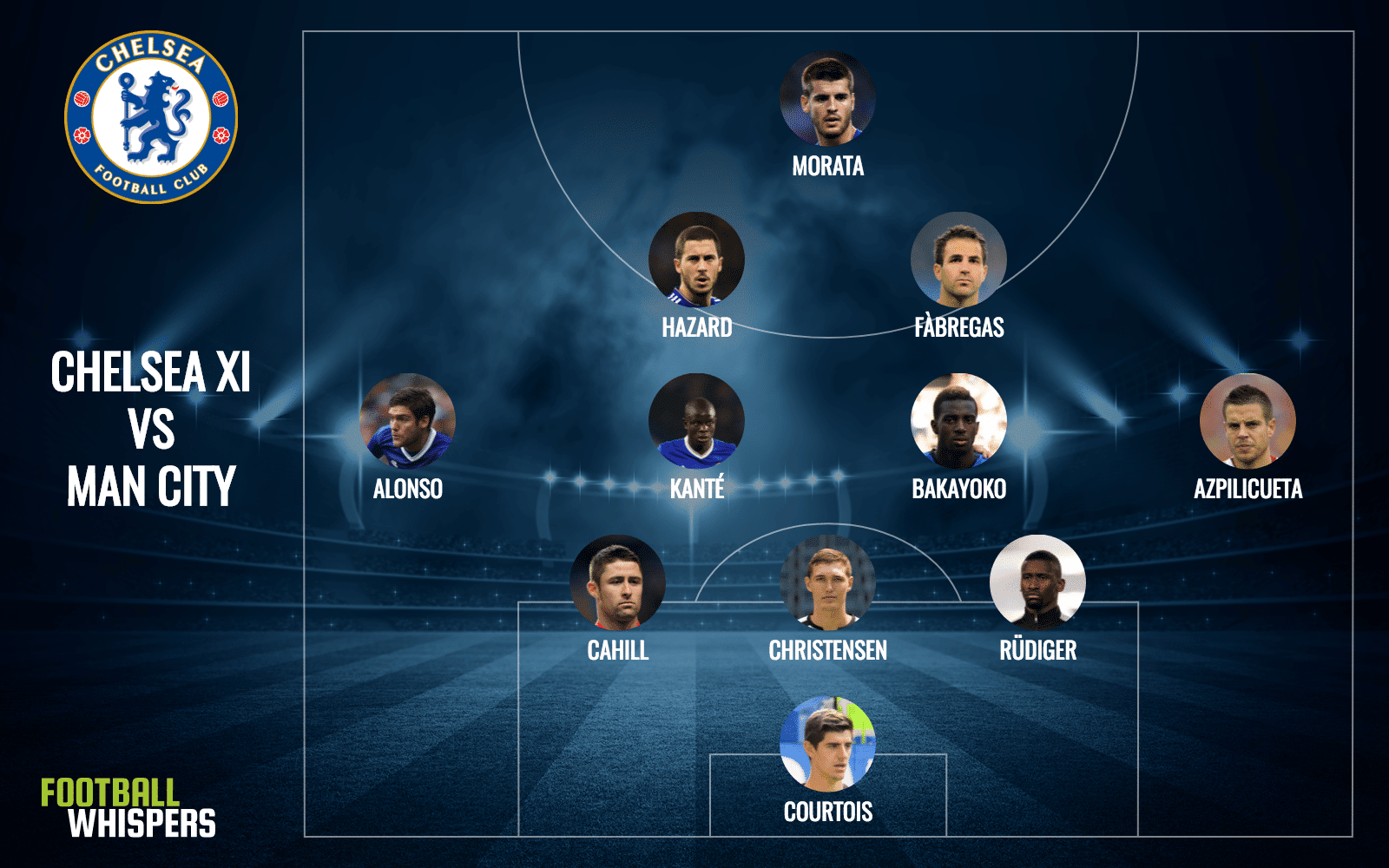 It's no surprise is it given he started life at right-back before excelling as a left-back for José Mourinho and impressed everyone as a right sided centre-back in Conte's back three.

But he's no jack of all trades and master of none.

The Chelsea boss clearly opted to start César Azpilicueta ahead of Davide Zappacosta and regular wing-back Victor Moses because of the Spainard's superior defensive ability. But he showed, at various stages, that he offers something going forward and is perhaps the club's best option in that position.

Perhaps when David Luiz returns from suspension Azpilicueta at right wing-back might be a more regular occurrence with the Blues no longer short at centre-back.

Morata readymade for the Premier League 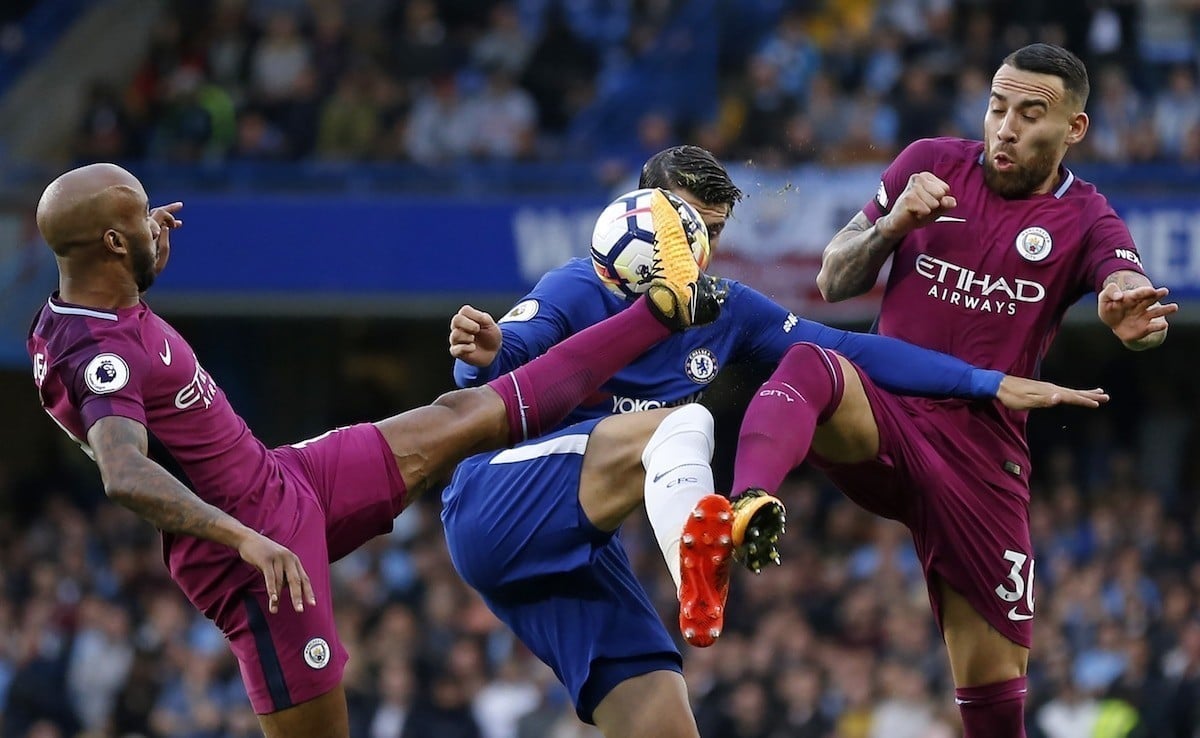 Before limping off with what looked like a hamstring injury, Morata looked to be asking the City backline a whole host of questions. He was holding the ball up well, winning his aerial duels, playing on the shoulder of the last mane and running the channels.

Many raised an eyebrow when Chelsea parted with £70million to bring the Real Madrid man to the Premier League but early showings suggest it was money well spent.

He's eerily similar to prime Fernando Torres. The one who terrorised the defenders on a regular basis before injuries caught up with him.

This is a City backline which hasn't been breached since August and he was giving them all kinds of problems. It shows how dangerous he was before his match as prematurely brought to an end.

He completed two dribbles, won 50 per cent of his aerial duels and nearly scored inside of two minutes.

Chelsea's wing-backs are key to their style and their system. A lot of the time they're almost wingers and it allows the wide forwards to move centrally. Chelsea then have players in positions to disrupt the oppositions play if they look to play out from the back.

Guardiola clearly identified this and set about countering it. Sterling and Sané held their positions high and wide, pinning the Chelsea full-backs and making it a back five.

None of the three Chelsea centre-backs are the sort to defend space well, they're much better suited to a deep line so aren't likely to push on to track players in the space behind the midfield.

With the home side pinned in a back five shape, City pushed their full-backs – Delph and Kyle Walker – into a centre midfield area along with Fernandinho meaning it was three vs three in that area.

This allowed David Silva and Kevin de Bruyne the freedom to push on to support the City attack. If one of the Chelsea midfielders followed it left them short in the middle third and City could maintain the pressure.