It's a little known fact but you can actually set your watch by West Ham United‘s desperate summer search for a new striker.

A year ago they signed Lucas Pérez while in 2017/18 they brought Javier Hernández back to England and snapped up Marko Arnautović. The 2016/17 summer window was a particularly fine vintage with Toni Martínez, Ashley Fletcher, André Ayew all pitching up at the London Stadium.

This summer they need help more than ever after releasing Andy Carroll, selling Pérez and being brow-beaten into letting Arnautović make his ‘dream' move to the Chinese Super League.

All of which leaves them with Hernández, who may also want out amid rumours he is a transfer target for Fiorentina.

The Hammers had hoped to remedy this issue with the signing of Celta Vigo forward Maxi Gómez. But after agreeing to meet the Spaniard's €50million release clause the deal fell down over how those payments would be structured.

Bournemouth striker Callum Wilson was another reported target but the England international is on the verge of signing a long-term contract extension with the Cherries.

So it's back to the drawing board for West Ham's hierarchy with time running out. With that in mind, we've drawn up a five-man shortlist to help the East Londoners' recruitment department before the transfer window closes on August 8. 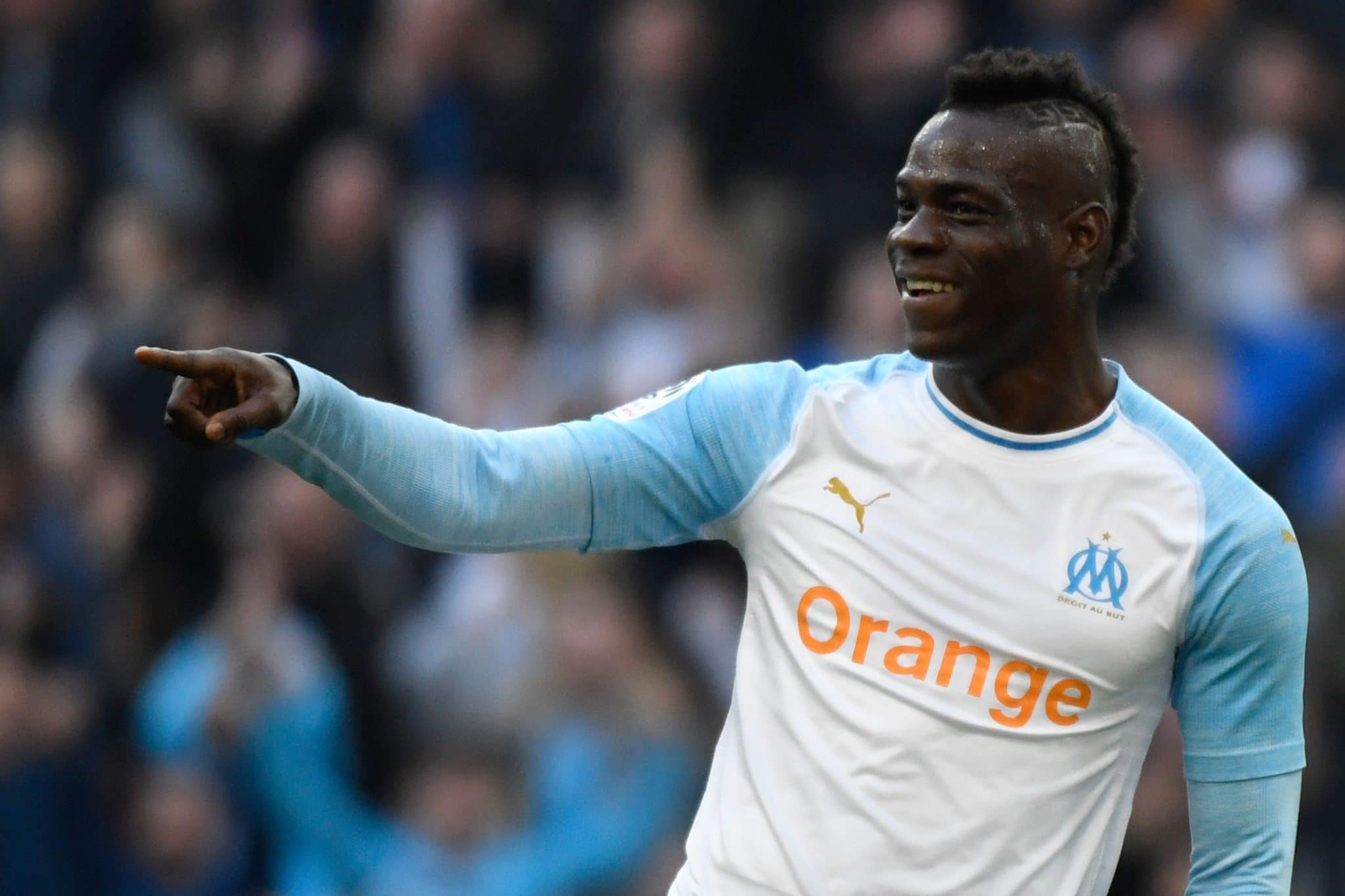 Money is rarely an issue for West Ham who were prepared to break their club-record transfer fee to sign Gómez this summer. But could the free agent market be an option?

Balotelli is free once more after his short-term deal with Marseille ended. In just 12 Ligue 1 starts the 28-year-old bagged eight goals for OM, building on two strong seasons with Nice in which he managed 33 to rebuild his reputation – we'll overlook the first half the 2018/19 campaign in which he made just nine starts and failed to score.

The big drawback with Balotelli is his propensity to do the inexplicable. The Italian international is unplayable on his day – recall his performances for the Azzurri at the 2012 European Championships – but those spells are few and far between with off-field antics dominating the headlines the rest of the time.

Only this week the chicken hat-wearing, ‘Why Always Me?' pondering, bathroom-firework releasing forward paid a man £1,800 to drive a moped into the sea. Yes, really. 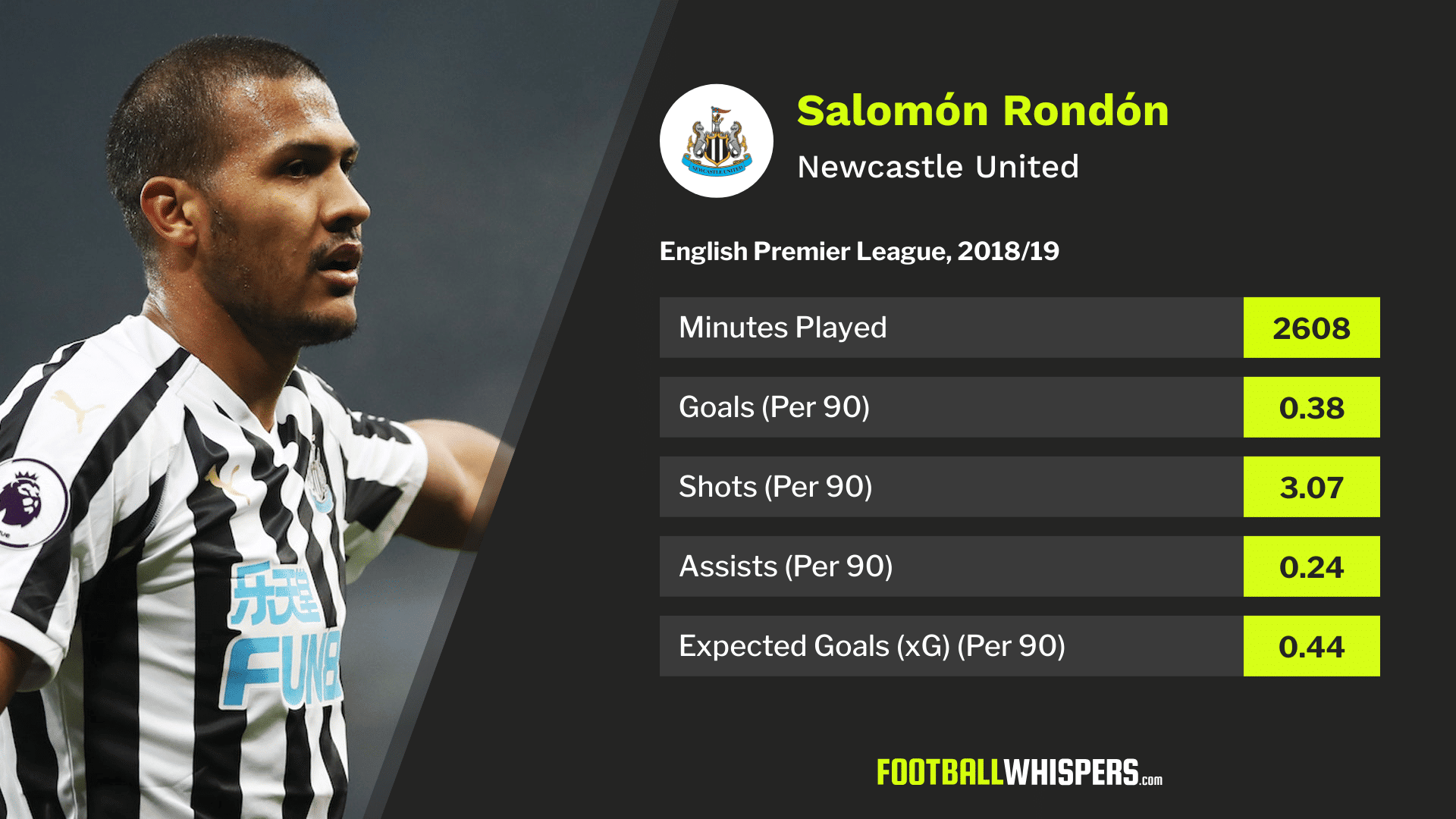 The Venezuelan enjoyed a stellar 2018/19 campaign, laying to rest the ghosts of his final season in the Premier League with West Brom by netting 11 times for Newcastle United. A permanent transfer is out of the Magpies' reach and with the Baggies desperate to offload one of the remnants of their time in the top flight, the 29-year-old on the open market this summer.

Former Newcastle boss Rafael Benítez wants the beefy forward to reunite with him at Chinese side Dalian Yifang. But after finally coming of age in the Premier League a chance to build on his time at St. James' Park could prove hard to turn down. Rondón is the perfect line-leading centre forward, is well within the Hammers' reach financially, and worked with Manuel Pellegrini for two seasons at Malaga, in which he scored 27 goals.

While Rondón didn't particularly excel in any one area last term – he managed just one shot on target per 90 and 4.79 touches in the opposition box – he was playing in an extremely limited, structured Newcastle side. West Ham will have ambitions of getting as close to the top seven as possible this season and in a more attack-minded team he could thrive.

Another player available for nothing, Llorente is currently in no-man's land after his contract at Tottenham Hotspur came to an end last month. At 34 he isn't a long-term option but, as he showed in Spurs' run to the Champions League final, he can be a very handy one.

As well as being free and available, the 6ft 4in forward would fill the Carroll role nicely and his ability to hold the ball up and bring others into play could complement new signing Pablo Fornals. He has plentiful Champions League experience and was part of Spain squads which won the World Cup and European Championships in 2010 and 2012.

He isn't prolific but in his time at Swansea City the Pamplona native bagged 15 from 28 Premier League starts for a struggling side. With a supply line of Fornals, Felipe Anderson, Manuel Lanzini, Robert Snodgrass and a fit-again Andriy Yarmolenko he could be a shrewd pick-up. 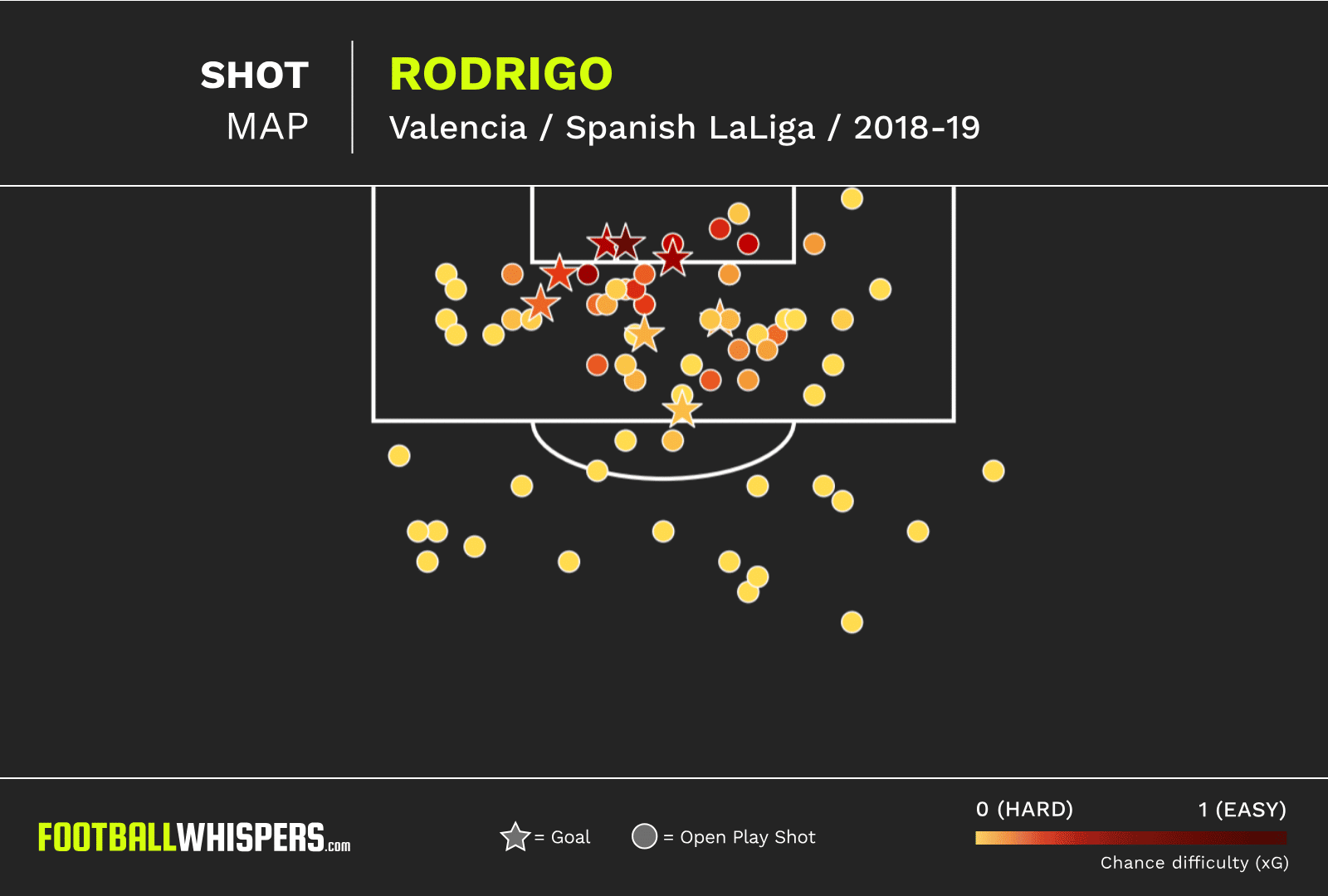 Those with a good memory might remember the Valencia forward from his single season on loan in the Premier League with Bolton Wanderers between 2010 and 2011. A lot has changed since then. He's now a fully-fledged member of La Roja and has a CV which includes goals in Portugal as well as his homeland.

At that point, the Spanish international was a Real Madrid Castilla prospect trying to cut his teeth in the game. And while he never made a La Liga appearance for Los Blancos, Rodrigo has carved out a good career for himself, first in Portugal with Benfica and now in Spain.

Capable of playing wide as well as through the centre, the Brazil-born Spaniard is not prolific. But he showed he could be a reliable scorer during 2017/18 by hitting 19 goals in all competitions for Los Che.

Last season he weighed in with six assists and was tenth for headed efforts with 0.74 per 90, it shows he is a versatile threat. 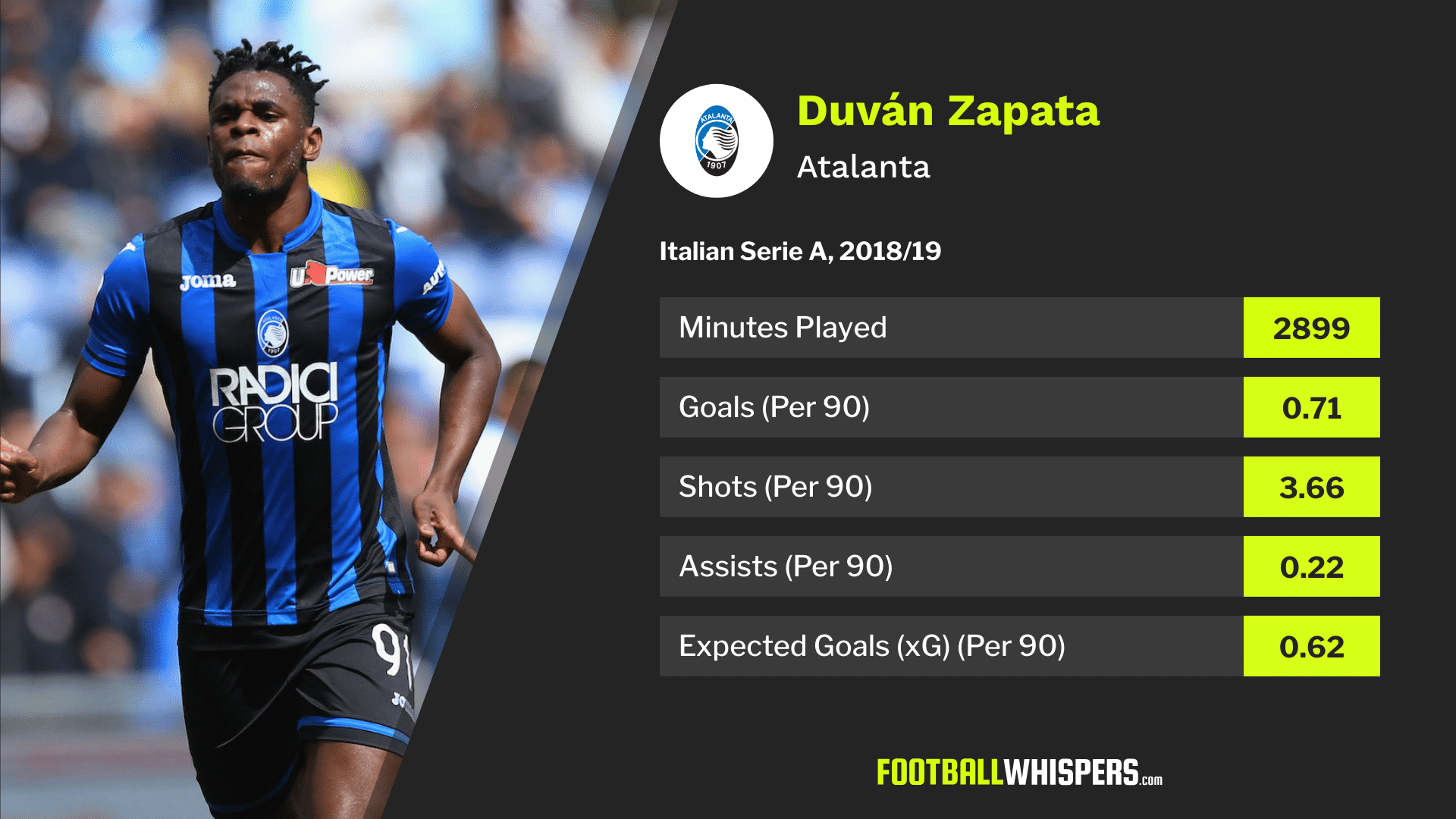 If the Hammers want to make a splash after failing to reach an agreement for Gómez then they should look no further than Zapata, who netted a career-best 23 Serie A goals while on loan at Atalanta last season.

La Dea have the Colombian for another season and retain an option to make that switch permanent, which could complicate things – as could reported interest from Juventus.

Zapata had not threatened this before, scoring 11 and ten Serie A goals in the last two seasons for Samp and Udinese respectively. But from December 3 to January 30 he was unstoppable, racking up 17 of the 28 goals he notched in all competitions last season.

That could be cause for concern as his stand-out season was hinged on an incredible hot-streak in which he struck 14 goals in eight games either side of the winter break.

Zapata overachieved against both his seasonal xG (19.92) and xG 90 (0.61) but with 9.4 touches in the opposition box per 90 – no-one in Italy's top flight managed more – he at least got in the right areas consistently while he scored more big chances per 90 (0.55) than any other forward in Italy's top flight.