With the 2016/17 season all but over, the biggest clubs in Europe will already be preparing themselves for a hectic few months as they look to ensure their squads are ready to compete with their rivals next term.

For those who failed that might mean a complete reshuffle, but teams who – like Liverpool – met their expectations this term will be seeking additions that can take them to the next level.

Now back in the Champions League, the Anfield giants will be working to provide Jürgen Klopp with better options in a number of positions, hoping that the German boss can lead the team back to glory in UEFA’s elite club competition.

With that in mind, here we run the rule over Liverpool and identify five Serie A players who could improve the side in 2017/18.

One area of the current Liverpool squad in need of an upgrade is left-back, with the functional but limited James Milner unlikely to be enough of an attacking threat In the Champions League.

That he is both reliable and a leader to the side warrants mention, and is why Roma defender Emerson is perhaps an ideal suggestion.

Only 23 years old, the presence of the former Leeds United and Manchester City veteran would allow him time to grow into the role and understand Klopp’s demands while his obvious potential means that he could eventually supplant Milner in the starting XI.

Emerson is a typical Brazilian wing-back who likes to bomb forward at every opportunity, creating 1.3 scoring opportunities per game in Serie A this term. His distribution is smart and incisive, connecting with 87.9% of 42 passes per outing, while his dribbling is equally effective, successful with 44 of the 62 take-ons he attempted in 2016/17 (71%).

He also averaged 1.9 tackles and 1.9 interceptions in the league, showing his increasing application to the defensive side of the game. There is still much room for improvement there, but early indications show that Emerson is a player to watch closely and one who could certainly help Liverpool.

Much like his current team-mate, Leandro Paredes has impressed with Roma and could certainly improve the overall quality on show at Anfield, widely linked with a move to Liverpool in recent months.

The presence of Radja Nainggolan, Kevin Strootman and Daniele De Rossi has limited him to just 15 league starts this term, but the team looked much more cohesive when the Argentinian was on the field.

Also making 12 appearances from the bench, the Argentinian contributed three goals and one assist in that time but created 2.6 scoring chances per 90 minutes, a team-high among players to have featured for more than 500 minutes.

The 22-year-old connected with an impressive 88.4% of those attempts, the video above highlighting skills that no midfielder in the current Liverpool squad can truly match given both his range and creativity.

That Paredes also worked hard to win back possession must be noted, his averages of 1.8 tackles and 1.4 interceptions per game underlining the effort that was so evident in his play.

Breaking into the Sampdoria first team this season, Lucas Torreira – a native of Fray Bentos, Argentina – quickly established himself as a bargain for the Genoa based side who paid just €1.7 million to sign him from Pescara in the summer of 2015.

Small and quick but lethal between the lines, the 21-year-old failed to register a single goal or assist in his 34 appearances this term, yet his fingerprints were everywhere to anyone who watched the Blucerchiati in action.

Averaging 2.8 tackles and 2.5 interceptions per outing, Torreira featured in the centre of midfield in coach Marco Giampaolo’s 4-3-1-2 formation, protecting the defence while carrying the ball forward with ease.

A long-time target for the club, Liverpool have repeatedly sent scouts to watch Domenico Berardi in action for Sassuolo and this summer could be the one that sees him finally leave the Mapei Stadium.

Since bursting onto the Serie A scene back in 2013, the 22-year-old has relentlessly been linked with a move away, but he has rejected approaches from Juventus and Inter to remain with the Neroverdi.

However, perhaps more than any previous juncture, he has now outgrown the Emilia-Romagna side who will finish this season closer to the relegation zone than the European spots.

Berardi can still take pride in a fine individual campaign, bagging five goals and nine assists in just 20 appearances after losing much time with a serious injury.

Now fully recovered, he is back to his devastating best, able to pick out team-mates with neat, crisp passes before ghosting into space at breakneck speed.

Indeed, his off-ball movement is undoubtedly his finest asset, one that – combined with deadly accuracy in front of goal – makes him a nightmare opponent for all but the very best defences. Take a moment to consider that despite his young age he has currently totalled 43 goals and 31 assists in just 110 Serie A appearances.

Thought to earn just under £47,000 per week on a contract that expires in 2019, it would not take a ridiculous offer to prise him away from Sassuolo should Liverpool decide to make their move.

If Berardi could be an easy player to sign, the same is certainly not true of Andrea Belotti.

The Torino striker has captured the spotlight after scoring 25 goals this term, clubs across Europe wondering if he could be the man to bolster their attack only to baulk at the news his current side have inserted a €100 million buyout clause into his contract. 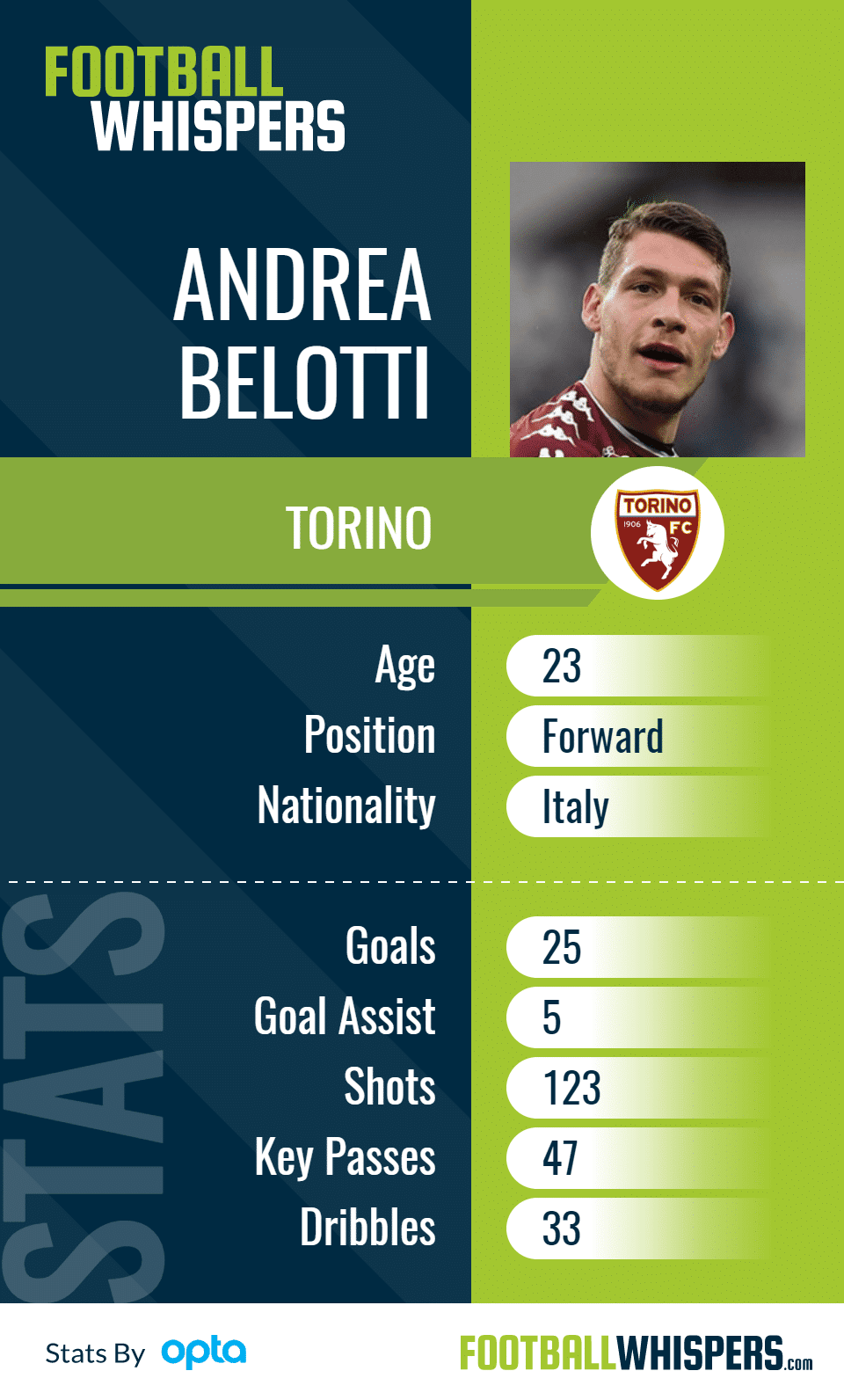 Yet there is an inescapable feeling that, particularly for a team like Liverpool, the 23-year-old could well be worth the investment. Of course his remarkable prowess in front of goal would be a welcome addition for any coach, but his suitability to Jürgen Klopp’s system goes far beyond an ability to make the net bulge.

Belotti is tireless, running the channels or behind the opposition backline in the 93rd minute as hard as he does when the first whistle blows, constantly seeking space for both himself and his team-mates.

When the ball comes his way, he is merciless, netting 10 times with his right foot, 10 more with his head and five with his left, possessing both the pace to outrun would-be markers and the power to battle with them in one-on-one duels.

When possession is lost, he immediately turns his attention to winning it back, pressing as Siniša Mihajlović has demanded at Torino and just as he would need to under Klopp. The failures of notable Italian imports should not deter Liverpool here, Belotti is both the real deal and an ideal fit.