It hasn't been a good summer for fans of worryingly substituted with an ankle injury during Spurs' pre-season friendly win against Juventus.

While Mauricio Pochettino says the club do not yet know the full extent of Trippier's injury, there are growing concerns he will miss the start of the season. As a result, it's perfectly reasonable to imagine that Daniel Levy has ramped up the search for a replacement to Walker's replacement.

The market currently has a variety of intriguing right-backs, so here are five Spurs should target.

The one-time Barcelona transfer target has been heavily linked with a move to Spurs this summer and, while Pochettino may try to make the Portugal international his first signing in this window, they are likely to face stiff competition from Juventus, who are actively pursuing a replacement for Dani Alves.

The 23-year-old is an enterprising, marauding presence on the right wing and is comfortable operating either as a full-back or further forward. His natural predilection to drive forward with or without the ball draws an obvious comparison to Alves as well as Walker and Trippier.

Cancelo, who played under Gary Neville at Valencia, possesses tremendous energy and pace which, combined with dribbling, makes him a menacing proposition for opponents.

Crucially, though, his crossing is impressive and he often takes Valencia's corners. He notched four assists for los Che last season and would be a productive outlet for Spurs, whose attacks are often built on the wings, evident last season through the turbo-charged performances of Walker and Danny Rose.

With Cancelo, there would be no radical departure from the norm for the temporarily Wembley-based club, and with a first-rate striker in Harry Kane eagerly anticipating any crosses into the box, a deal in the region of £25million could prove to be very fruitful indeed.

The controversial Ivorian has been linked with a move to Manchester United and Chelsea recently, with both clubs reportedly awaiting the verdict of his appeal to quash a conviction for assaulting a police officer last year. As it stands, Aurier cannot enter the UK.

However, with Spurs in need of reinforcements in that position, Pochettino may be swayed into throwing Spurs' name into the hat and pipping two major rivals to the services of the Paris Saint-Germain man.

In Aurier, Spurs would be getting an athletic, robust presence on the flank; a player of sheer force and pace who can be a wonderful asset on the counter-attack. He also filled in at centre-back and on the left last term.

Aurier's rampaging runs are an attractive feature to Spurs and an attribute Pochettino would know how to hone. At 24, he has experience but there is still scope for improvement.

His past transgressions – he once used a homophobic slur to describe former PSG boss Laurent Blanc – seem to be an issue. But Spurs will hope that, if he gets handed a clean slate, a heightened sense of maturity will soon follow.

The Southampton full-back, whose impressive form for the Saints has seen him linked with a lucrative move to Barcelona, is also apparently on Tottenham's radar.

The 25-year-old Portuguese joined Southampton in 2015 and has steadily established himself as one of the league's more reliable and consistent right-backs, proving to be a more than worthy successor to Nathaniel Clyne at St Mary's.

Soares is different, both physically and mentally, to a defender á la Aurier. Whereas the Ivorian's game is built predominantly on pace and power, Soares is more thoughtful. He compromises aggression in order to read the game astutely. While he may not be blessed with blistering pace – an attribute often looked upon as essential in the modern full-back – he is rarely caught out of position.

Up against the Premier League's eclectic range of wingers, you'd expect Soares' lack of pace to be exposed. However, his tackling success rate is a highly impressive 77 per cent. That's down to his discipline and nous. He makes tackles because he's in the right position to make one and, while he may only stand at 5ft 8ins, he made 37 headed clearances last season, so he can handle himself in the air.

He may not be a buccaneering speedster, but Soares would be a very shrewd – not to mention affordable – option. Southampton, as they like to do, however, are playing hardball.

Spurs have been heavily linked with the Hoffenheim defender this week, with some reports stating that he caught the eye of scouts during the recent European Under-21 Championships.

Toljan aligns closer to Walker's philosophical makeup rather than Trippier's. He is a direct and pacey winger, determined to bomb down the flank and support attacks. It's largely effective, but his fitness and energy would help him flourish in Pochettino's high-intensity, high-pressing game.

Toljan has thrived under wunderkind manager Julian Nagelsmann at Hoffenheim, being used mainly as a wing-back in a back-three formation, and his explosive pace is a regular feature of the Bundesliga side's attacking play.

However, Toljan has significant strides to make if he is to be considered a rounded player. He struggles defensively, particularly with his back to the goal, and that is an area Pochettino will need to zone in on if he is to nurture him as the club's long-term replacement for Walker.

He is 23, though, so there is time to learn and, at a reasonably modest £13million, he represents a dramatically cheaper option than some of the names on this list. 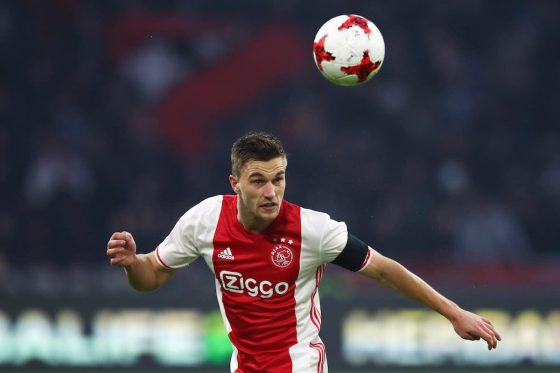 As revealed by Football Whispers back in June, the Ajax right-back is one of Spurs' defensive transfer targets.

The 25-year-old – who can also operate as a centre-half – started the Europa League final against Manchester United and could follow fellow Ajax alumni Toby Alderweireld and Jan Vertonghen in making the switch from Amsterdam to North London.

Veltman had an impressive campaign for the Dutch side last season, making 30 appearances and notching three assists. He averaged 4.4 tackles per game, an excellent rate, 2.7 interceptions and 3.8 clearances. Figures which clearly illustrate he has what it takes defensively to thrive in the Premier League.

Veltman is extremely comfortable with the ball at his feet (as you'd expect with an Ajax player), while he has a good sense of timing when it comes to overlapping, one of the fine arts of the full-back role.

He is the type of defender who relishes the grittier side of things while, at the same time, isn't afraid to play his part in a beautifully constructed attack. He seems to have the full package and is also keen to leave, so a Spurs bid may be a case of when rather than if.