The title race was over after two minutes.

Cristiano Ronaldo (who else?) had put Real Madrid 1-0 up against Málaga, in a match Zinédine Zidane’s side needed to get a point from to win the league.

In the end, they ran out 2-0 winners, with Karim Benzema netting in the second half as well to wrap up their first LaLiga title since 2012, when José Mourinho was in charge at the Estadio Santiago Bernabéu.

But what set them apart from the rest in Spain this season?

We look at five reasons they won the league.

Real Madrid have the strongest squad in Spain, there’s no doubt about that.

Their strength in depth is incredible.

But like most sides they have a starting XI when everyone is fit, and that means Zidane has had to keep the players who are not first choice happy.

Isco, Pepe would all be first-choice players at any other club.

Yet at Real Madrid, when everyone was fit, they didn’t tend to start.

There of course have been a few wobbles – Isco looked like he was on his way out at the beginning of 2017, while James also looks set to leave the Bernabéu.

But Zidane seems to have got them all firing and willing to come together for the greater good of the team.

And he hasn’t been afraid to rotate too.

Despite only starting 12 times, Vázquez played more games – 33 – in the league than any other Real Madrid player.

And Isco came in and took his chance and could well have ousted Gareth Bale, who’s been missing for large chunks of the season to injury.

But with Zidane resting the likes of Ronaldo and Benzema for crucial games in the run-in, he showed players like James, Morata and Vázquez that he trusted them and they repayed him with crucial wins at places like Eibar and Granada.

Whether they’ll be happy next season is another question, but Zidane handled it perfectly this campaign. 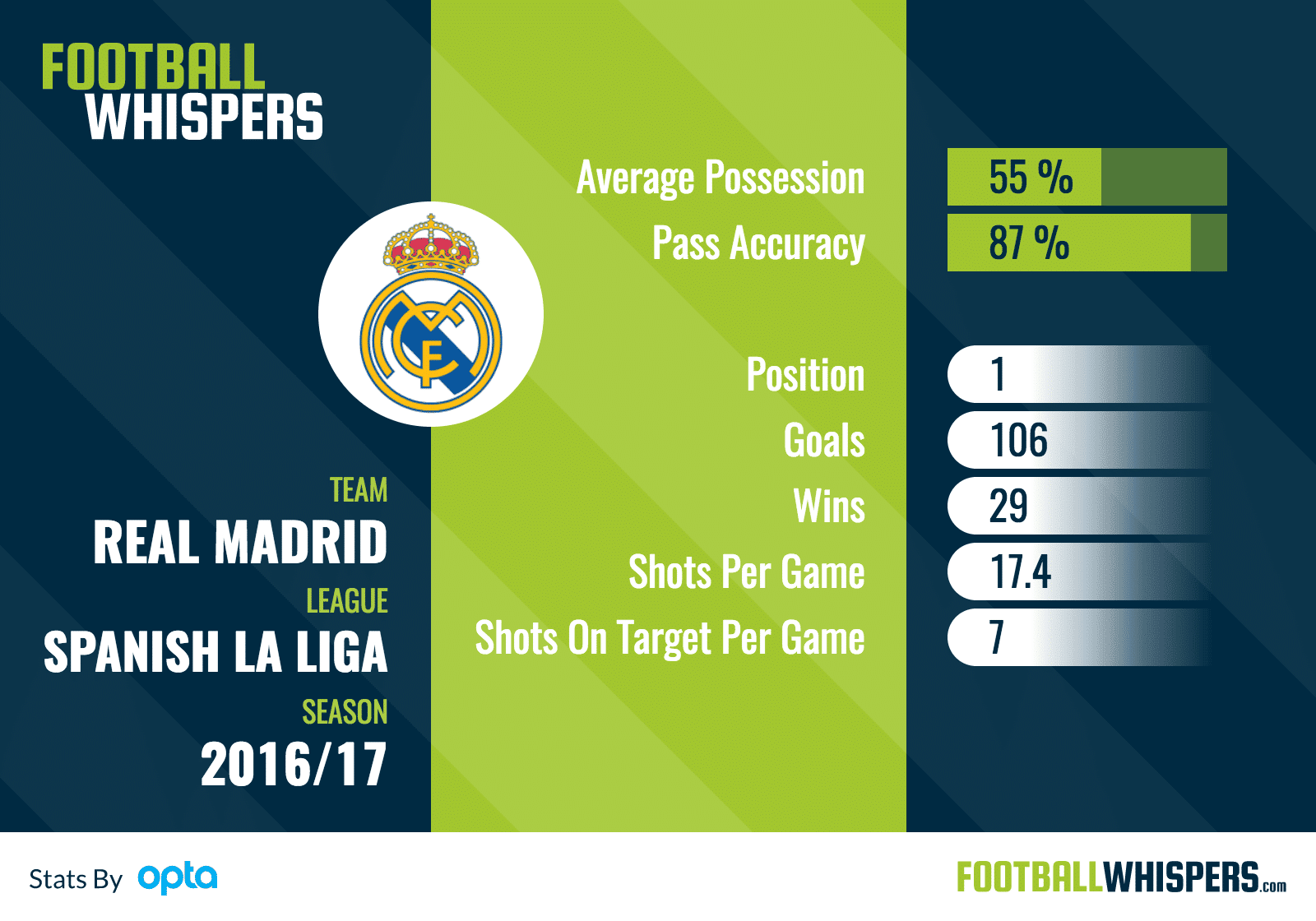 Best midfield in the league

Barcelona fans may argue with this, but Real Madrid’s midfield trio of Casemiro, Luka Modrić and Toni Kroos were vital to the team’s success.

Zidane is certainly a fan of Modrić.

“It’s his tranquillity,” the Frenchman said when asked about him by Sky Sports.

“I have the best players and we could talk about any of them, but if you ask me about Luka, I have to talk about his calmness with the ball at his feet.

“La tranquilidad. That’s what he gives to the team when he’s playing well. He makes the rest play.”

And only Luis Suárez got more assists (13) than Kroos’ 12 this year.

Kroos’ passing accuracy is also up there with the best in LaLiga.

If you only take into account the players who have played more than the average number of appearances in LaLiga, only Samuel Umtiti – 92.9 per cent – had a better passing accuracy in the season just finished than Kroos’ 92.2 per cent.

The highest-ranked Barcelona midfielder was Busquets with 89.9 per cent.

And obviously Casemiro has been crucial.

He spent the 2014/15 season on loan at Porto and that looked like his Real Madrid career was over.

But he has come back to great success and really provides the balance at the base of the midfield trio.

Yes, Barcelona went top of the table winning the Clásico on April 23.

But Los Blancos had a game in hand against a Celta Vigo side who’d thrown all their eggs in the Europa League basked and Barcelona were only ahead due to head-to-head.

It was a late push to make the LaLiga title race competitive, when in fact, Real Madrid were the best team all season.

Sevilla seemed to push Real Madrid going into the new year, but after it became clear Jorge Sampaoli would take the Argentina job, their form fell off a cliff and they ended in fourth.

Madrid just seemed one step ahead of their rivals at all times.

For the first time in Real Madrid’s history, they won the league by taking more points away from home than at the Bernabéu.

Their victory at La Rosaleda on Sunday meant they have 47 points on the road compared to just 46 as the home side.

Their away form is seen more impressive if you take into account that from the away game against Athletic Club on March 18 until the win at Celta Vigo to all but secure the title on May 17, Ronaldo didn’t leave Madrid for a LaLiga fixture.

But that leads us onto Ronaldo well.

Yes, he may have played in fewer games than before – his 29 league games are the fewest since his first year in Spain.

But in fact no other Real Madrid man played more minutes in LaLiga than the Portuguese superstar’s 2544.

While 25 goals in the league is his worst return since arriving in the Spanish capital, he was still Los Blancos’ top scorer – ten ahead of Morata.

And it was the 32-year-old who opened the scoring in the crucial game in Málaga.

It may not have been his best season in terms of goalscoring, and undoubtedly he is no longer the unstoppable force he once was, but he is still head and shoulders above most other players in Spain.

If you include his six assists, being involved directly in 31 of Real Madrid’s 106 goals.

That works out as 29.2 per cent of all their goals this season.

Not a bad return at all.