On Tuesday night, Celtic welcome Paris Saint-Germain to their iconic home stadium for a hotly anticipated Champions League opener. Drawn in a group also containing the champions of Germany and Belgium, Bayern Munich and Anderlecht, Brendan Rodgers’ side have a difficult task ahead.

Before the European campaign proper got underway, the manager stated his side’s aim was to stay in continental competition beyond Christmas. To do so, the Bhoys will have to finish inside their group’s top three. In order for this to be a realistic aim, they will have to make the most of their home ties.

While Anderlecht are seen as the most obviously beatable opponent for Celtic, Tuesday evening’s clash with PSG represents an opportunity to make a statement. Against the odds and with next to no expectations on them, anything other than a defeat would be seen as a win.

However, the French giants are stronger than ever.

Over the summer the Parisians broke the world transfer record to sign Neymar from Barcelona in stunning fashion. They then partnered him with Kylian Mbappé, one of the most exciting young forwards in the game today. Along with the additions of Dani Alves and Yuri Berchiche at full-back, they appear ready for a serious Champions League tilt.

Celtic are ambitious and believe any opponent can be beaten at Parkhead. Here, Football Whispers break down the match tactically and analyse how the Scottish champions could pull off the upset.

BRING THE WINGERS BACK

Throughout much of his time in charge, Rodgers has opted for a rough 4-3-3 shape with a proliferation of attacking midfielders and wide men. Generally speaking, these individuals have a great deal of freedom within the system, but this cannot be the case against PSG.

The French side have one of the most incisive forward lines in Europe today, something that has been proven so far this season. In five Ligue 1 games they have hit an incredible 19 goals, averaging just under four per match.

Rodgers would be wise to alter his favoured shape with this in mind, bringing back the wingers when not in possession to form a rough 6-3-1 defensive setup.

This would allow the full-backs, Mikael Lustig and Kieran Tierney, to tuck inside alongside the central defenders. It would also ensure that PSG’s full-backs, who are two dangerous offensive weapons themselves, are covered by Celtic’s wingers.

The energy and pace of Scott Sinclair and Jonny Hayes makes them perfect for such wide roles, which have been used at times in recent years by various different teams, including Roma and West Bromwich Albion.

STAY COMPACT WITHOUT THE BALL

With the wingers dropping back in the defensive phase, Celtic will be able to create numerical superiority in the centre. Their two full-backs and two centre-backs, most likely Jozo Šimunović and Nir Bitton, must then remain compact and minimise the space available to the Paris Saint-Germain forward line in the centre.

Defence in numbers is not enough on its own to thwart a team of PSG’s quality; the Scottish side must look to keep their shape and not be distracted by the movements of Neymar, Cavani and Mbappé.

This will mean avoiding man-marking and high pressing, instead taking up a deep defensive block that moves as one unit from side to side, with players stepping out only when absolutely necessary.

Cavani’s presence up front means Celtic are always going to be vulnerable in crossing situations – the Uruguayan is a formidable aerial presence. But that threat is preferable to the possibility of PSG’s front three finding space in the centre to combine and break through.

GIVE ROBERTS A FREE ROLE

Were Rodgers to adopt the system and defensive approach recommended in this article, there would appear to be no obvious role for Roberts on either wing. However, this could instead be an opportunity to utilise the Englishman in a free role behind a lone striker, as depicted in the below graphic. 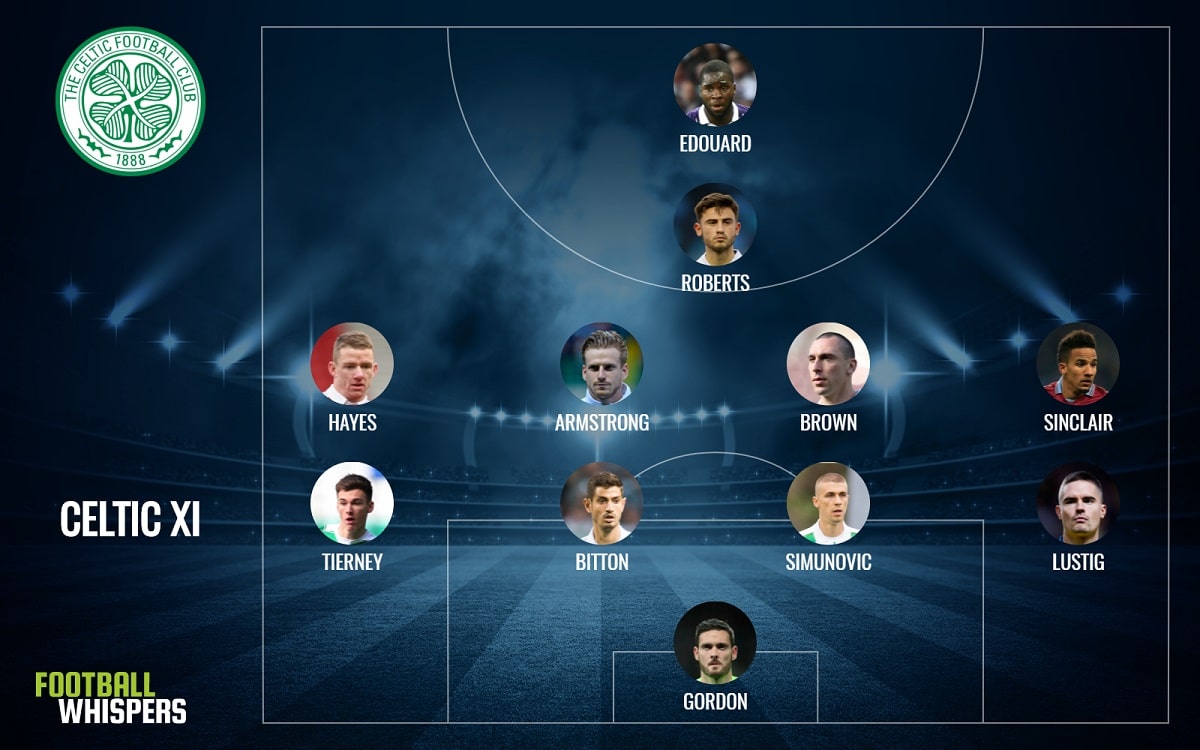 With his exceptional technical ability, close control and flitting movement, the on-loan Manchester City man enjoys playing in more central areas where he can have greater influence on a game. And against an extremely attack-minded opponent such as PSG, he would relish finding and exploiting spaces between the lines to unpick their defence.

His movement on the blind side of the opposing midfield line could offer viable angles for penetrative forward passes, while his dribbling skill and creativity would help to commit defenders and free up space elsewhere.

PRESSURE MOTTA, IF HE PLAYS

Last weekend, PSG defeated Metz comfortably by a 5-1 margin, away from home. The result was yet another example of their dominance in attack, as they lined up in an adventurous 4-4-2 system with Neymar and Julian Draxler out wide.

Whether Unai Emery decides on a similarly bold approach away to Celtic is yet to be seen, but if he does, Thiago Motta would be worth targeting.

The Brazil-born former Italy international is, at 35 years of age, reaching the latter stages of his career. And while he remains a good passer of the ball, he isn’t quite the same physical and athletic specimen of his younger years.

Marco Verratti will likely return to the fold for Tuesday night’s game, meaning Adrien Rabiot may drop out to accommodate the more experienced Motta’s presence. If he does start, Celtic should look to pressurise him to disrupt PSG’s build-up and potentially force turnovers.

Perhaps the biggest story of his meeting centres on Odsonne Édouard, Celtic’s latest signing. This because the 19-year-old striker joined the Glasgow club on loan from Paris Saint-Germain for the season, with an option to buy.

Having impressed and scored on his debut against Hamilton Academical, he will no doubt be keen to prove a point to his parent club, who have been accused of failing to maximise their youth team graduates’ potential in the past.

With Moussa Dembélé not fully fit and Leigh Griffiths recovering from a minor injury, Rodgers should trust in Édouard to lead the line.

The youngster could then use his pace to target the channels between PSG’s centre-backs and full-backs in attacking transitions, causing havoc whenever space arises.

With confidence flowing, he should also be instructed to shoot on sight to test Alphonse Areola, who is capable of goalkeeping errors.