Manchester City are looking to cash in on Kelechi Iheanacho as manager Pep Guardiola's summer of change really starts to take shape. The 20-year-old Nigerian is valued at close to £25million and could be one of a number of changes at the Etihad.

The Manchester Evening News claim City are gearing up for a big summer sale as the Catalan manager really looks to put his stamp on the a squad which finished a disappointing fourth in the Premier League last season, and that Iheanacho is certainly going to be a casualty of this.

The City striker was one of the positives from Manuel Pellegrini's final campaign in charge, scoring eight goals in 753 minutes in the Premier League. He followed that up under Guardiola by scoring four goals in 528 minutes and added a further three assists.

To date, he's been involved in a goal every 80.9 minutes when both league and European minutes are combined.

He's an exciting talent who could be a bit of a wildcard and, in the modern market, £25million is is a bargain for a player of his potential.

We've taken a look at five possible destinations for the unwanted City forward.

There's been no indication from the Reds that they're in the market for another striker after the arrival of Dom Solanke this summer.

Jürgen Klopp's men have been linked with defenders, midfielders and wide forwards.

However, with uncertainty surrounding Divock Origi's future, Daniel Sturridge not being the most reliable and an increase in the potential number of games next season, Liverpool need options.

The Belgian forward has just the two years remaining on his current deal and, with a World Cup at the end of the season, wants guaranteed first-team football.

In a Football Whispers exclusive, we revealed that he's open to a return to France.

Iheanacho wouldn't be a guaranteed starter at Anfield but he'd see more than enough minutes to make an impact.

Tottenham Hotspur transfer rumours suggest a striker is on the list of potential targets for Mauricio Pochettino's men. Although the club's prime target is reportedly Monaco winger Thomas Lemar, they are still in the market for a goalscorer.

After the failed experiment with Vincent Janssen, the Premier League runners up have been linked with Lucas Alario, Moussa Dembélé and Kevin Gameiro.

Alario and Gameiro may be seen as risks and something Spurs aren't overly sold on taking having been stung by the aforementioned Janssen and Roberto Soldado. Iheanacho would arrive with both Premier League and Champions League experience as well as being capable of leading the line by himself and playing in a partnership. He ticks a number of boxes.

The Toffees aren't shy in spending money this summer.

Jordan Pickford has completed his £30million move to Goodison Park.

The club have also splashed the cash to bring in highly-rated Ajax captain Davy Klaassen.

Three of the four mentioned are attackers in some capacity.

Even if Romelu Lukaku does stay at the club, Everton need attacking reinforcements.

Arouna Koné and Enner Valencia have both left, leaving them light up top even if the two weren't necessarily up to the standard required for where Everton want to be.

And that need for firepower up front is showing in their targets.

There's a youthful revolution going on with the blue half of Merseyside and Iheanacho would be the perfect striker to spearhead it. 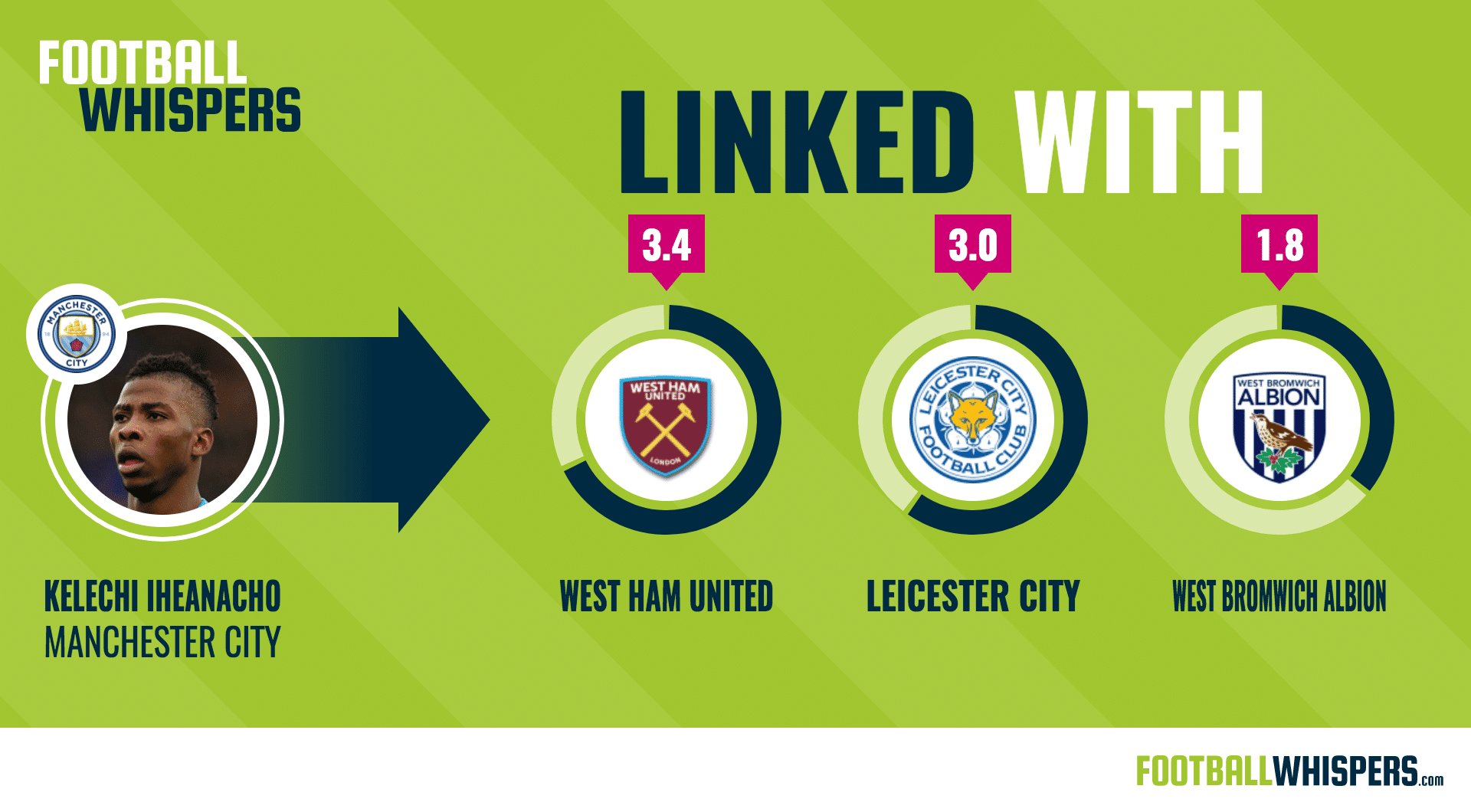 The wildcard on the list. Firstly, the elephant in the room. Brendan Rodgers' side can't afford the £25million fee on Iheanacho's head, even if star striker Dembélé is sold for bug bucks.

However, they will need a replacement if the French forward does depart and there's not many of his quality available. Any deal would have to be a loan one but as shown by the Patrick Roberts one, the two clubs do have a working relationship.

Celtic have been linked with Manchester United's Adnan Januzaj over recent days which shows the appeal the club does have.

A successful loan in Scotland with guaranteed minutes and Champions League exposure could see his price-tag inflated. City could benefit from holding off on officially selling him. Alternatively, they could sell him to the Scottish champions and insert clauses into the deal to ensure they make the most of his development.

The most obvious destination on the list. The Hammers have been linked to Iheanacho for a number of weeks as they look to bring an end to their search for a striker which has spanned two transfer windows and 12 months.

The striker would be a starter for Slaven Bilić's men and if reports are to be believed he'd have an exciting amount of talent providing him the ammunition. Brentford playmaker Jota has been linked as has Southampton's Dušan Tadić, who reportedly has a £13million release clause.

With the club already being able to call upon the talented Manuel Lanzini, they have a variety of options, and good ones at that.

LET US KNOW BY FOLLOWING FOOTBALL WHISPERS ON TWITTER