It’s been a frustrating start to the Premier League season for Leicester City.

Craig Shakespeare’s side looked like they were going to get off to the perfect start, but two late goals saw them go from 3-2 up to a 4-3 defeat against Arsenal on the opening day of the season.

They then sold Danny Drinkwater to Sporting Lisbon.

But that move was registered just 14 seconds after the deadline on August 31, with FIFA rejecting an appeal to allow him to be registered to play.

That means the Foxes will now only be able to add Silva to their playing squad when the transfer window reopens in January.

Without Silva, Leicester currently sit 17th in the table, with just one win from seven games, which will put pressure on Shakespeare, especially after the sacking of Claudio Ranieri last year, in the season after he lifted the title at the King Power Stadium.

Silva will come in, but if their poor form continues, they will likely look at more options in the January window, but who should they be targeting? We’ve got five suggestions.

Being dropped for Leicester’s 0-0 draw at Bournemouth pretty much summed up how disappointing Riyad Mahrez has been this season.

After handing in a transfer request and being subject to Roma rumours all summer, it looked like the Algerian was set to leave the King Power Stadium this summer.

He also went AWOL on deadline day as he looked to force a move, but with no success.

Mahrez looked good against Arsenal, but since the transfer window closed, he just seems a shadow of the player he once was for Leicester – he clearly feels his future lies away from the club, and when that happens, he won’t give 100 per cent as he doesn’t want to risk an injury affecting a potential move.

He has the ability to shape and influence Leicester’s fortunes in the final third and when he isn’t performing, there are subsequently fewer chances for his teammates to score.

According to the Premier League’s official website, Mahrez has only created one big chance this season and, if he doesn’t dramatically improve his productivity, Leicester could be in real trouble.

With Demarai Gray also subject of Everton transfer rumours, his future may lie away from Leicester too, leaving Shakespeare short of wingers.

Undoubtedly, Theo Walcott would be available and would be a great signing for the Foxes.

He has played just 47 minutes of football for Arsenal this season and the Gunners want to cash in on him as he approaches the final 18 months of his contract – wanting to avoid a situation like they currently have with Mesut Özil and Alexis Sánchez set to leave this summer on a free.

Walcott is thought to be attracting interest from the likes of Everton, Crystal Palace, Southampton and West Ham United.

Leicester should be able to compete with all of them in the transfer market.

Scoring goals has been an issue for Leicester this season.

Only Jamie Vardy, Shinji Okazaki and Harry Maguire have found the back of the net this season.

The Foxes may have spent big on Kelechi Iheanacho in the summer, but he’s failed to convince Shakespeare to break up the Vardy-Okazaki partnership, only starting one Premier League game.

Islam Slimani has only started once too, while out-of-favour Leonardo Ulloa hasn’t even played.

It is always worth freshening up the strike force when possible and a top-class striker in Kevin Gameiro will be available this summer.

He’s out of favour at Atlético Madrid and when Diego Costa is registered in January, he will fall further down the pecking order.

The Frenchman scored 39 goals in 92 La Liga games at Sevilla before his move to Madrid and certainly knows how to hit the back of the net.

At 30, he isn’t the youngest – but Vardy and Okazaki show strikers can still do it in their 30s, and his arrival would give Leicester a striker force that most others would be envious of. 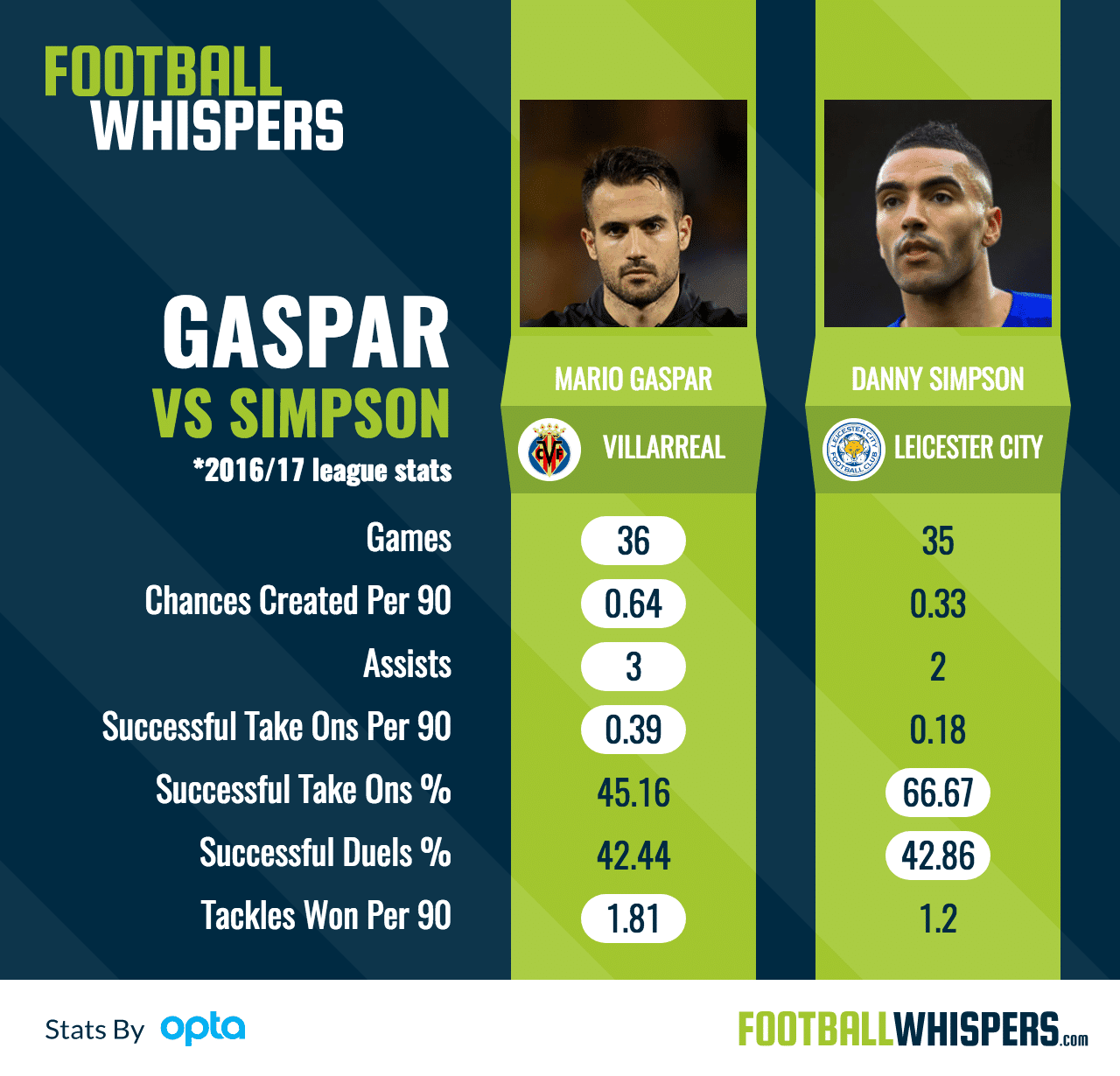 Looking at Leicester’s squad, the lack of depth at right-back stands out.

Danny Simpson has been great undoubtedly, but at 30, isn’t getting any younger.

Mario Gaspar has only played four times in La Liga for Villarreal this season due to injury, but he is undoubtedly one of the best right-backs in Spain.

If his name seems familiar to fans in England who don’t follow Spanish football, it will be because of the spectacular goal he scored against the Three Lions – an overhead kick in a 2-0 win in Alicante in November 2015.

The strike was so spectacular it was nominated for FIFA’s Puskás Award, although don’t expect too many goals – he has only scored seven for Villarreal in more than 200 league appearances.

But that isn’t what you necessarily want from your full-back and he still offers a threat going forward.

In the league last season, Gaspar created more chances per 90 minutes (0.64) than Simpson (0.33), which worked out at more assists over the season (three to two).

Defensively, they were pretty much even in terms of total duels, with the Villarreal man winning 42.44 per cent of his compared to Simpson’s 42.86 per cent, while Gaspar came out on top in terms of tackles won per 90, with 1.81 compared to 1.2.

He may seem like a big target, but if they can convince Sevilla captain Vicente Iborra to swap La Liga for Leicester, why not Gaspar? 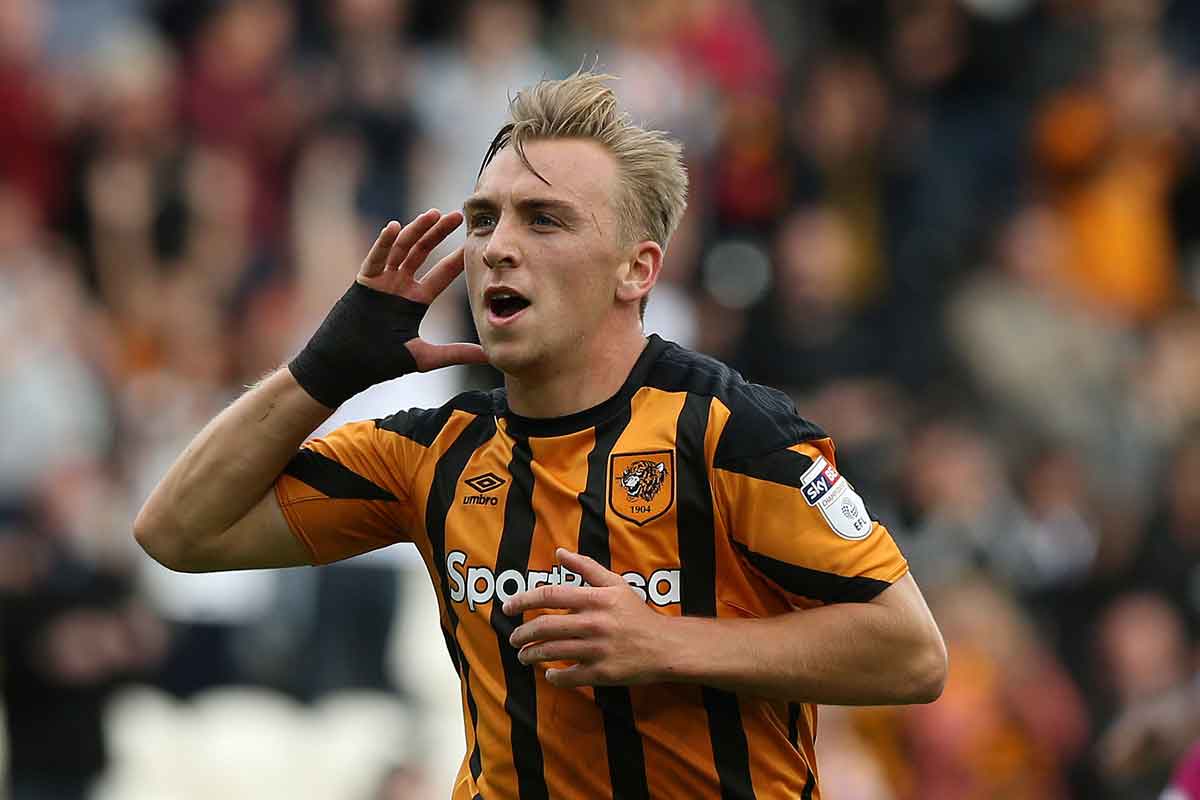 While Walcott may be an option for the first-team on the wing with proven experience, Leicester could also look to the Championship for hot prospects.

It worked before with Gray, and with Vardy and Mahrez among the players rising up from the second tier of English football with the Foxes before excelling in the Premier League, there is definitely talent there.

Jarrod Bowen is having a great season for Hull City, playing on the right of their attack.

The 20-year-old has seven goals in just 11 Championship games and will surely attract interest from the top flight if he carries on this form.

He only recently signed a new deal at Hull, but you would imagine that if a Premier League club came calling, it would be hard for Leonid Slutsky to keep hold of him.

Middlesbrough defender Dael Fry is thought to be a Leicester transfer target, and while he not be someone who would immediately go into the starting line-up, he would be a smart purchase.

The 20-year-old has impressed at the heart of Boro’s defence since relegation, playing nine Championship games so far this season.

His form has earned him a call-up to the England Under-21 squad.

He has represented England at every level from Under 17s upwards and was a member of the England Under 20s squad that won the World Cup in South Korea last summer.

With Harry Maguire, Leicester already have one of the most promising English centre-halves around, if they bring in Fry too, the Foxes could have the future of the Three Lions defence at the King Power Stadium.