Chelsea’s summer transfer window was a strange one.

But a number of , Fernando Llorente moving to Tottenham Hotspur and Alex Oxlade-Chamberlain favouring a switch to Liverpool.

Antonio Conte was said to be frustrated with some of the activity, especially up front, having made a new striker a priority.

We’ve looked at five players they should be targeting.

With Llorente, it was clear Chelsea wanted someone who was good in the air to play up front.

Edinson Cavani is one of the best forward around and his heading skills are the envy of many other strikers.

The Paris Saint-Germain striker has played second fiddle to bigger attacking options in his time in France – first to Zlatan Ibrahimović and now to Neymar.

He had a public row with the Brazilian over who should take a penalty and that’s led to his future coming into question.

The 30-year-old Uruguayan claims things are OK now between him and Neymar, saying: “These are things you discuss in the locker room. Everything has a solution.

“It's all relaxed now. It is important that everyone strives for the same goal.”

But if there are more rows before January, it’s clear PSG would come down on Neymar’s side – they aren’t going to want to upset the world’s most expensive player.

Cavani has been linked with being an Everton transfer target, but surely a move to Stamford Bridge would appeal to him.

It would be perfect for Chelsea too. They would have two world-class attacking options up the middle, while Cavani could also play wide as well.

Llorente was clearly a short-term option for Chelsea at 32, but perhaps they could look even shorter term in Aritz Aduriz.

The Spaniard is 36, but that doesn’t mean he couldn’t still do a job at Stamford Bridge – he already has seven goals this season.

He offers arguably more of an aerial threat than Llorente would have done, and is even better in the air than Morata, whose heading skills have been praised.

So far this season, the Athletic Club man has won an average of 2.4 aerial duels per game, while his Spanish compatriot at Chelsea has won just 1.6.

The Blues’ other striking option Michy Batshuayi is averaging just 0.3. 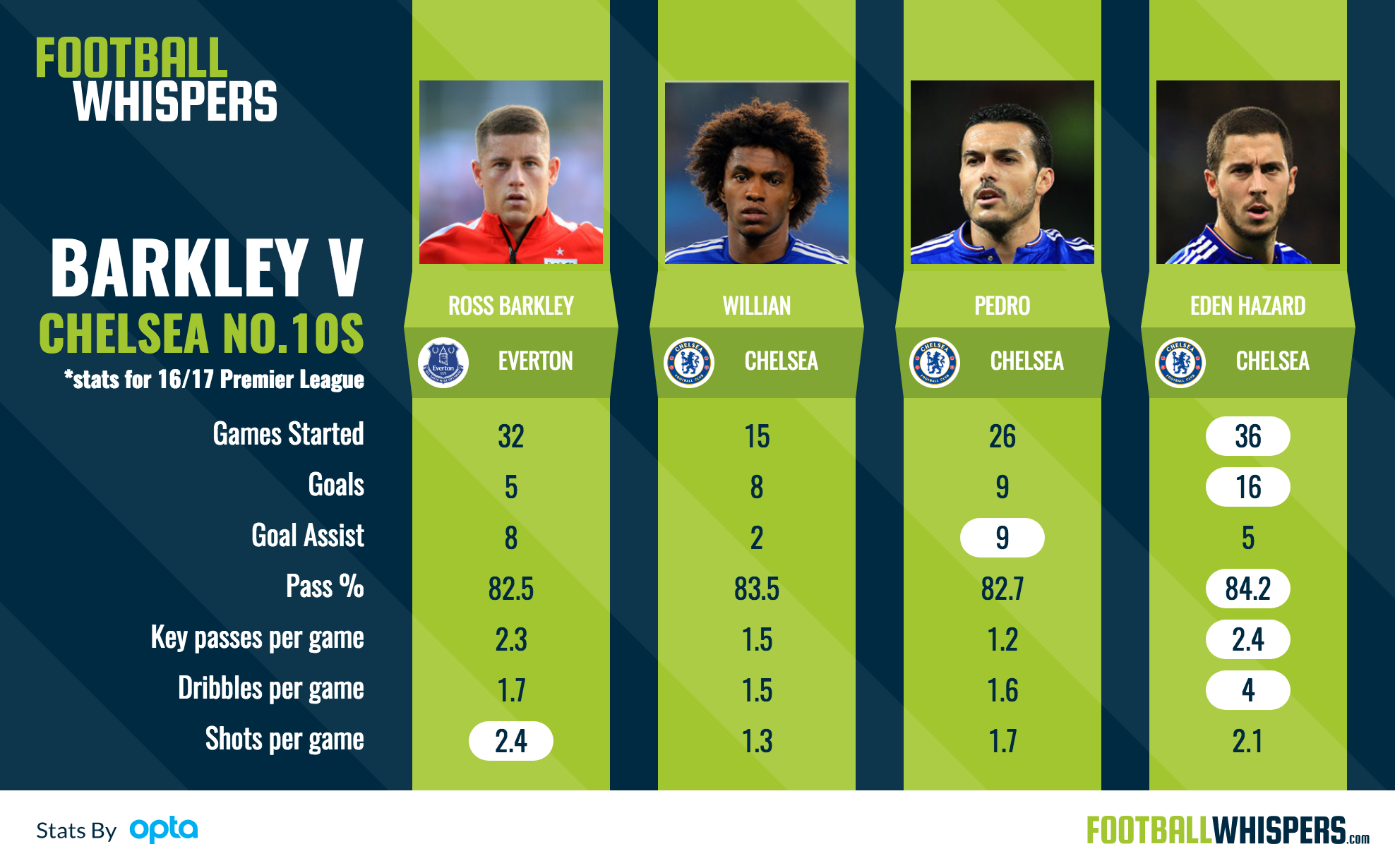 Now also a Tottenham Hotspur transfer target, Chelsea were close to bringing in Barkley on deadline day, only for the deal to fall through, so the midfielder could properly evaluate all his options.

There is no reason why the Blues shouldn’t go back in for the Everton man.

He will be fit again in January and could offer Chelsea something they don’t currently have with their three other options to play behind the striker.

If you compare Barkley’s statistics in the Premier League last season (we won’t look at this season’s as he is yet to play due to injury) to Chelsea's options, the Englishman comes out on top for shots per game (2.4) – a significantly higher number than Willian (1.3) and Pedro (1.7).

Barkley also fares better than the pair on key passes per game (2.3) and dribbles (1.7).

He beats Eden Hazard in terms of shots per game too (2.4 to 2.1) but Chelsea’s star man did post better numbers in terms of dribbles, key passes and goals.

Yet, although Barkley was the lowest scorer of the four, he still managed eight assists – more than Hazard (five) and second only to Pedro (nine).

There’s no doubt that Conte wanted Juventus’ Alex Sandro this summer, and at once stage it looked like he was going to move to Stamford Bridge.

He stayed at Juventus though, with the Italian side unwilling to sell another one of their key men after the departures of Dani Alves and Leonardo Bonucci.

Conte obviously thinks he needs a few more options for the role of left wing-back.

It’s currently Marcos Alonso, with Kenedy as backup. Pedro and César Azpilicueta can also play there, but that would mean they’re taken away from somewhere else in the lineup, where they arguably play better.

Signing Sandro, one of the world’s best, would really show Chelsea’s intent to build a fearsome squad.

But, they may find it hard to convince the Brazilian to move, with reports from Italy suggesting he’s set to sign a new deal in Turin.

If Sandro can’t be convinced to go to Chelsea, perhaps they should look at a young player ready for the future.

Ryan Sessegnon is one of England’s top talents, playing regularly at left-back and left-wing for Championship side Fulham.

He’s reportedly a Manchester City, Manchester United, Liverpool, Tottenham and Arsenal transfer target and it’s not hard to see why.

The 17-year-old already has eight senior goals and is a regular for England Under-19s. It will only be a matter of time before he’s playing at a higher level.

He’s one of the first names on the team sheet for Fulham, a side with ambitions to go up.

Undoubtedly, the Whites won’t want to sell him, but if Chelsea make an offer they can’t refuse, he’d surely be on his way.

What’s more, he probably wouldn’t have to move if he made the move to the Blues.

And that could really appeal to the hot prospect, as his twin brother Steven Sessegnon is at the Fulham academy, and he grew up in Roehampton, which is not too far from Fulham, or Chelsea, at all.

Sessegnon may not quite be ready for a regular role in the Premier League just yet, but as a squad option, he certainly could play a role – he has already proven himself in the Championship.

The left wing-back role would suit him more than the full-back position he currently plays as it would play to his attacking strengths,

And if Chelsea play their cards right, they could have one of the best players in England in the next few years.