Earlier this year, Philipp Lahm announced that he would retire at the end of the 2016/17 season. The news stunned the football world—the player, at 33 years of age, was still an important component in a successful Bayern Munich side, and few saw a reason for him to depart the game.

However, the decision has been made, and now the Bundesliga champions must identify a quality successor in the German’s right-back position.

Here, Football Whispers assesses five candidates to do just that. 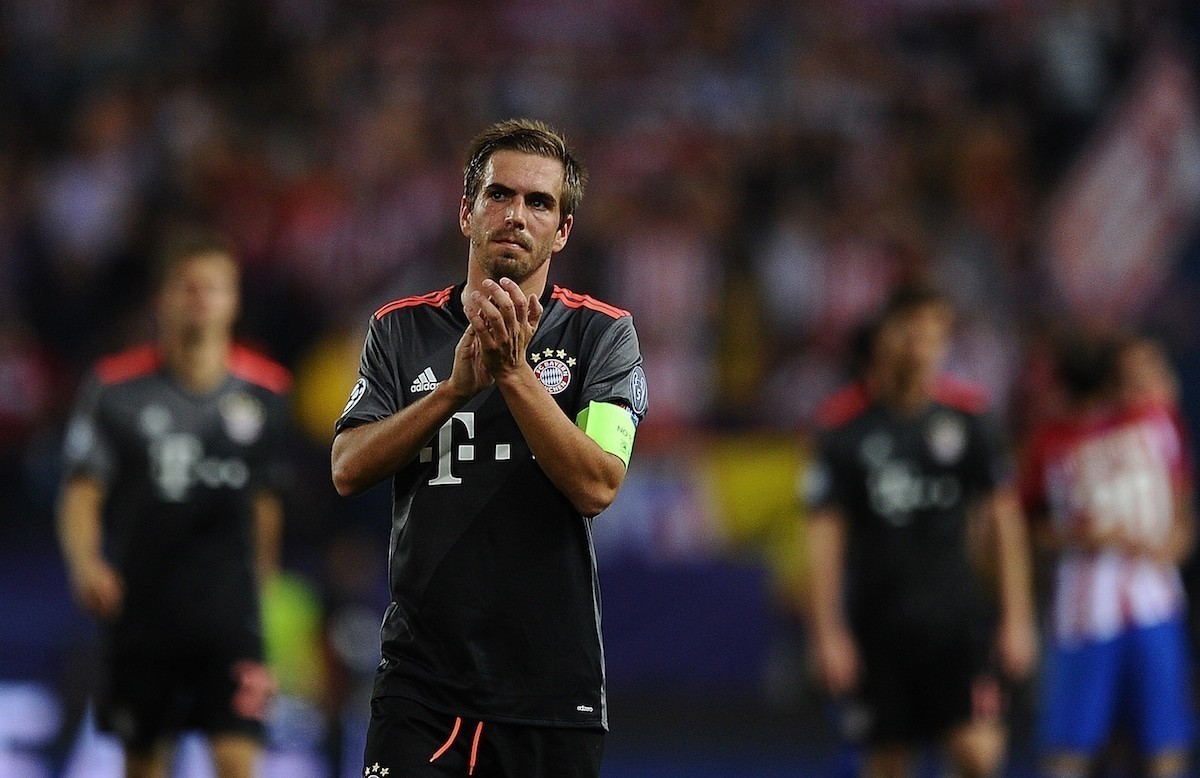 READ MORE: PHILIPP LAHM: FAREWELL TO THE MOST INTELLIGENT PLAYER IN THE WORLD

Portugal are lucky enough to have a raft of high-quality right-backs yet to hit their peak available for selection. As well as Southampton’s Cédric Soares and Benfica’s Nélson Semedo, they can call upon Valencia prospect João Cancelo.

The 22-year-old has established himself as the Spanish side’s first-choice right-back over the past two seasons, and his lung-busting forward forays mark him out as a genuine offensive threat. This is shown statistically by the fact he completed more dribbles per game – 1.8 – than any of his team-mates, and also through his occasional usage as an out-and-out winger.

Highly astute in one-on-one situations, the youngster relishes the freedom of the right flank and uses any space afforded to him as an opportunity to attack. In addition, he varies his runs – sometimes overlapping; sometimes driving inside – and provides decent service in the final third.

However, Cancelo’s defensive work and decision-making could be improved upon, especially if he is to replace Lahm.

Atalanta’s rise this season has coincided with the breaking-out of a number of promising young players. Franck Kessie has been linked with a move to AC Milan, while Mattia Caldara and Roberto Gagliardini earned moves to Juventus and Internazionale respectively. Andrea Conti could soon join them out the exit door.

This season, the 23-year-old has delivered on his early promise, putting in consistently positive displays for his team. Thanks to the tactics of head coach Gian Piero Gasperini, the young right-sider has been able to thrive in a wing-back role that brings the best out of his attacking instincts.

An incisive runner, Conti has real pace and acceleration, enabling him to break free from markers and advance down the right flank. He also has genuine end product, something highlighted by the fact he has had a direct hand in 13 league goals this term, scoring an impressive eight.

Bayern are said to be keeping tabs on the Italian, although they may face competition from Chelsea, Napoli and Internazionale.

In May, it was announced that Benjamin Henrichs had signed a new deal with Bayer Leverkusen that would keep him at the club until the end of the 2021/22 season. But that isn’t going to stop some of Europe’s top clubs – including Bayern – from circling the player in the coming years.

At 20 years of age, the full-back has made rapid progress this term. Asserting himself as a first-team player, he made 29 Bundesliga appearances, impressing throughout in what was a trying campaign for his club.

He also made his international debut for Germany last November, and was recently called into his country’s squad for the upcoming 2017 FIFA Confederations Cup.

All of this is likely to alert Bayern, who have a habit of snapping up their domestic rivals’ best young players. And they may only be encouraged by the similarities in profile between Henrichs and their outgoing icon.

Like Lahm, Henrichs has shown the flexibility to play effectively on the left flank, despite being naturally right-footed. There is also a noticeable maturity about his game, particularly in possession, that few young full-backs have.

Over the last three seasons, Elseid Hysaj has proven himself to be one of the finest right-backs in Serie A. And, while he is still only 23 years of age, he is readier than anyone else on this list to step up and replace Lahm.

After putting in some sound defensive performances to help Empoli survive in Italy’s top flight in 2014/15, the Albanian earned a move to Napoli. There, under the auspices of Maurizio Sarri, he has shone with his directness, tactical intelligence and technical ability. 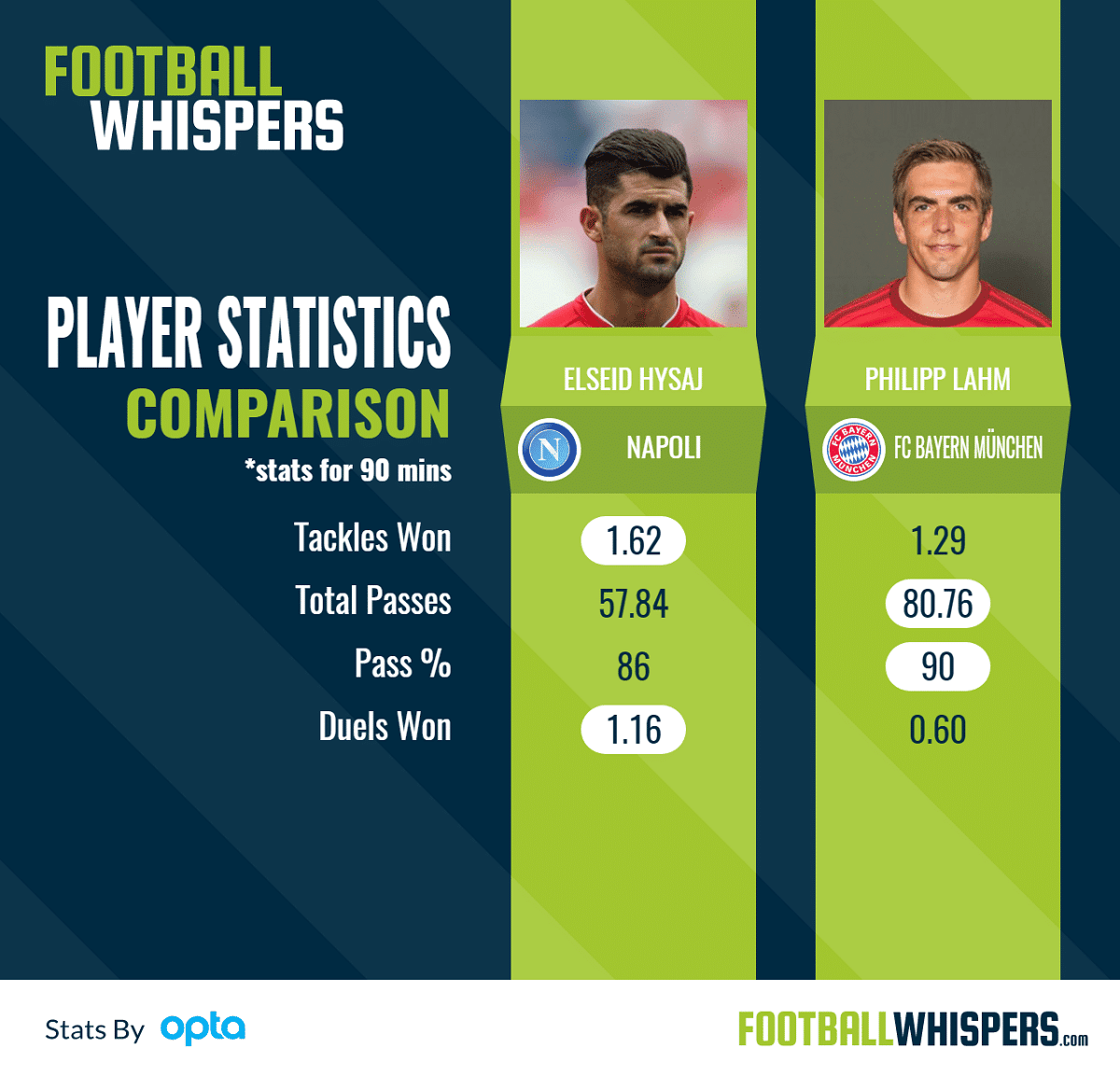 Unlike many other modern full-backs, Hysaj chooses his time to bomb forward. He also has a good understanding of what positions to take up both in the build-up phase and in the final third, combining well with both his central defensive and more attacking team-mates at every stage.

Averaging twice as many tackles per game (2.2) as he does completed dribbles, he is perhaps more conservative than some of his peers, but that doesn’t make him any less effective in attacking situations.

Last summer, Šime Vrsaljko was rumoured to be wanted by Bayern. However, the Croatian full-back ended up signing for Atlético Madrid, where he has struggled for regular game time. Despite this, the German champions would be unwise to forget about the player.

Perhaps inhibited by Diego Simeone’s tactics, the 25-year-old has not been able to unleash the full range of his attacking qualities on La Liga this term, and could need a move away to revive his stalling career. And joining Carlo Ancelotti’s side could see him return to his best.

During his time at Sassuolo, Vrsaljko at times acted almost as a conventional outside right, so high up the pitch was his positioning. From there, he showed variety in his crossing, with wonderful curled crosses mixed in with clever pull-backs. He also evidenced aggressive dribbling and an ability to come inside and attack defences when appropriate.

His ability to contribute in the final third is what may interest Bayern as they look to replace Lahm, whose talent for finding team-mates with accurate balls and proclivity for the occasional long-range shot made him a genuine offensive threat.