Historic Champions League comebacks aside, it’s been a disappointing season for Barcelona.

They still have an outside chance of winning La Liga, but if Real Madrid pick up at least four points from away trips to Celta Vigo and Málaga, the Blaugrana will have to console themselves with the Copa Del Rey — assuming they are able to overcome Alavés on May 27.

Domestic cup winners, league runners-up and the quarter-final of the Champions League might not sound like much of a crisis to the vast majority of football clubs in Europe, but Barça hold themselves to a higher standard.

Sub-par performances earlier in the season even led to manager Luis Enrique announce he’d step down at the end of the season, although this was before the incredible 6-1 turnaround against Paris-Saint Germain.

A new manager has yet to be announced – although Athletic Bilbao’s Ernesto Valverde is favourite to take the role – but it is expected that a number of players will leave Camp Nou this summer in order to raise money for a squad overhaul.

Here are five players Barcelona should look to sell when the transfer window opens.

READ MORE: HOW BARCELONA’S TRANSFER POLICY HAS FAILED THEM BADLY

Defensive midfielder-turned-defender Javier Mascherano has enjoyed seven trophy-laden years at Camp Nou. But it seems increasingly likely that the 2016/17 season will be his last for the club.

The 32-year-old has started 20 LaLiga games this term, the lowest number since his debut season in 2010/11, and the former West Ham man has been linked with a £4million move to Galatasaray.

Mascherano’s contract runs until 2019 and includes an £85million buyout clause, but the Catalan giants will allow the Argentine to leave for a fraction of that in order to free up space in their squad for reinforcements.

His performance statistics also suggest that his powers may be waning as he enters the twilight of his career, with his percentage of average duels won dropping from 52 per cent to 45 per cent, and his average defensive actions per game dropping from five to three.

If Mascherano is to leave at the end of this season he will no doubt have a string of suitors to choose from following such an illustrious career with one of the greatest sides on the planet.

Another defender who looks set for the exit door at Camp Nou is Jérémy Mathieu. The Frenchman is one year Mascherano’s senior and has made just 15 appearances for Barça this season in all competitions.

Mathieu has struggled with injury this term, while he was left out of the squad altogether for the Champions League quarter-final second-leg clash against Juventus.

The 33-year-old’s current deal will expire at the end of next season and the club may look to offload their €20million acquisition this summer rather than see him leave for nothing next year. 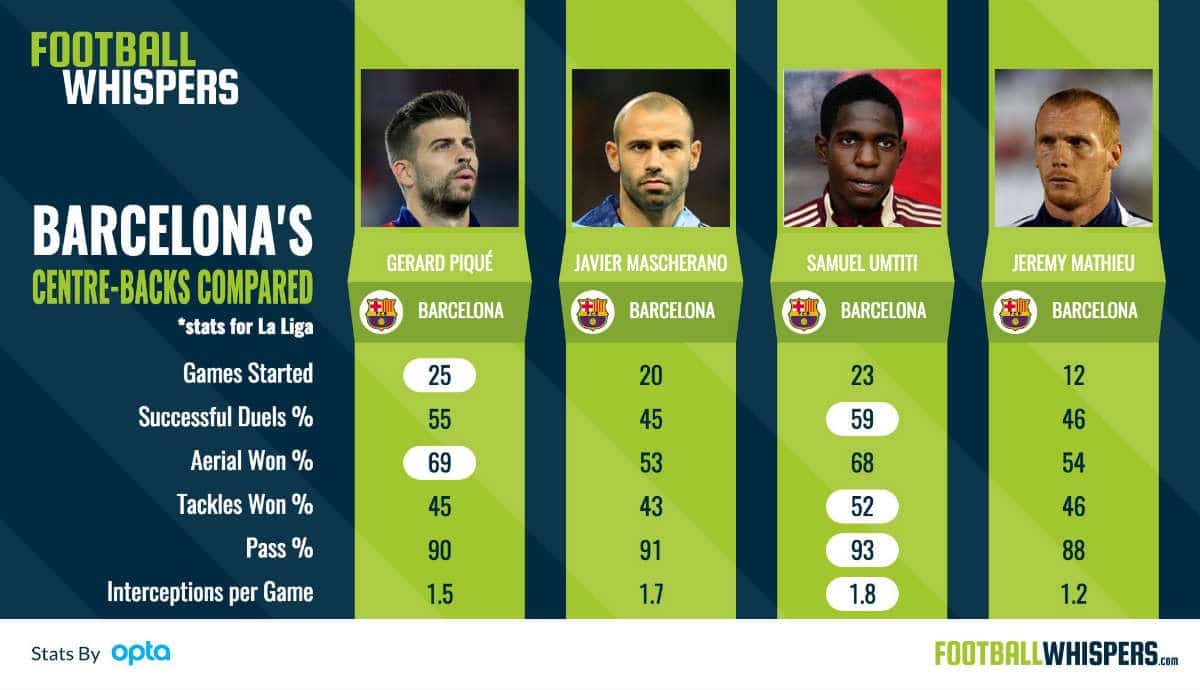 READ MORE: WHY BARCELONA MISS SAMUEL UMTITI SO MUCH WHEN HE DOESN’T PLAY

Brazilian right-back has made mediocre impression at Camp Nou since his €4million switch from Sao Paulo in 2014. The defender made just three league appearances in his first two years with the club, two of which came from the bench, leaving on loan for Sporting Gijón last August.

His time with Rojiblancos hasn’t exactly been a success either, with their relegation confirmed at the weekend.

At 26-years-old is more or less at the peak of his powers. But with two years left to go on his current contract Barça could still get some value for the player should they choose to sell now.

However, with a new manager coming in, and Douglas returning to the club when his loan deal runs out, the player may not be deemed surplus to requirements quite yet. 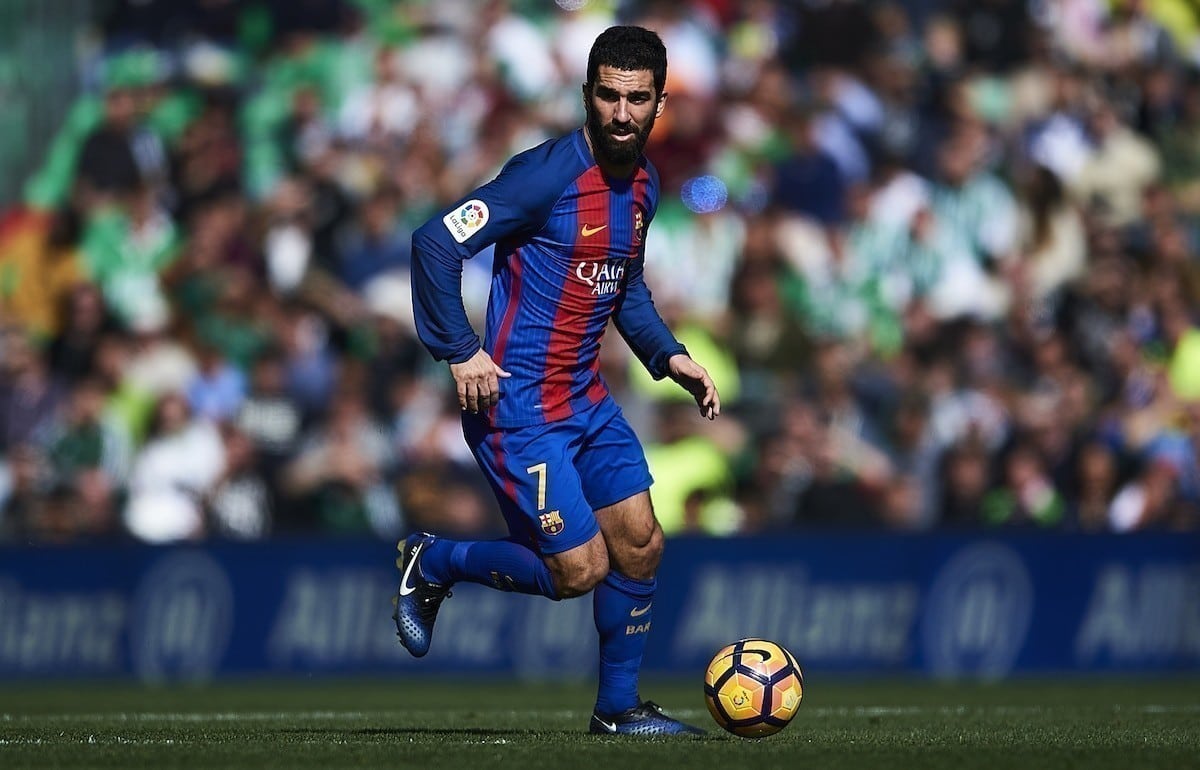 Turkey international Arda Turan has never quite managed to establish himself in the Barcelona first team since his move from Atletico Madrid in 2015, not helped by the fact he was unable to play for his new team until January 2016 due to the club’s transfer ban.

This season Turan has started just 16 games in all competitions, restricted to playing time by the sheer level of talent available to Enrique going forward, which makes his tally of 11 goals and four assists a good return.

If the 30-year-old was a couple of years younger he might yet still have a part to play. But the Turkish international is an Arsenal transfer target, as well as attracting interestred from Napoli and Liverpool. Barça may decide to cash in on the attacking midfielder in order to reinvest money in new signings.

Yesterday was a special day for me, making my debut in Stadio Olimpico and the Serie A. Great result! #ForzaRoma pic.twitter.com/Kz8sMCEi3R

Thomas Vermaelen’s career has been blighted by injury since his £15million move from Arsenal to Barcelona in 2014, making just one appearance for his new club in the 2014/15 season due to thigh problems.

He managed 13 outings last year but he was unable to nail down a regular starting berth ahead of Gerard Piqué, Mascherano and Mathieu.

The Belgium international was sent on loan to Roma at the start of this season but, again, injury has severely restricted his involvement for I Giallorossi after pubalgia kept the centre-back out of action for two and a half months at the start of the season. To date, Vermaelen has started just six games for Luciano Spalletti’s side.

With two years remaining on his current deal Barça will be keen to offload the defender in order to spend his salary elsewhere, though with his track record of serious injuries finding suitors could be difficult.