And on a broader scale, the individual tournaments, held every four years, are regularly memorable.

Whether you were around for the 1960 tournament to witness the Soviet Union triumph in France, or whether you grew up enthralled by the Dutch team of 1988, the Euro tournaments serve as a postcard in time, providing a vivid point of reflection at which fans from around the continent will look back on over the years and instantly feel the emotions conjured by events on the pitch.

For many in the England, Euro 96 is a revered as the moment when a nation united in support of Terry Venables’ men. The Three Lions were destined to bring football home, as Baddiel & Skinner and The Lightning Seeds had us believing. Ultimately it wasn’t to be, but equally as is the case with the joy of victory, the heartache of that penalty shoot-out semi-final defeat serves as a where-were-you-when kind of moment that England fans of that era will never forget.

And now, in France, 20 years on from the ’96 spectacle, we are in the midst of what we all hope will shape up to be another wonderful month of football, in keeping with Euros gone by.

So what better time to stop and reflect upon some of the greatest matches the European Championship has ever staged.

What a way to kick things off. The inaugural European Championship – or European Nations Cup as it was then known – was only contested between four sides: eventual winners the Soviet Union, runners-up Yugoslavia, third-placed Czechoslovakia and host-nation France.

The hosts opened the tournament by taking on Yugoslavia, and an instant classic ensued, with the nine-goal thriller still holding the record of most goals in a single Euro game.

And France almost took the spoils, leading 4-2 with 15 minutes to play, only for the Yugoslavs to rally and incredibly net three times in four minutes to steal victory from the jaws of defeat. 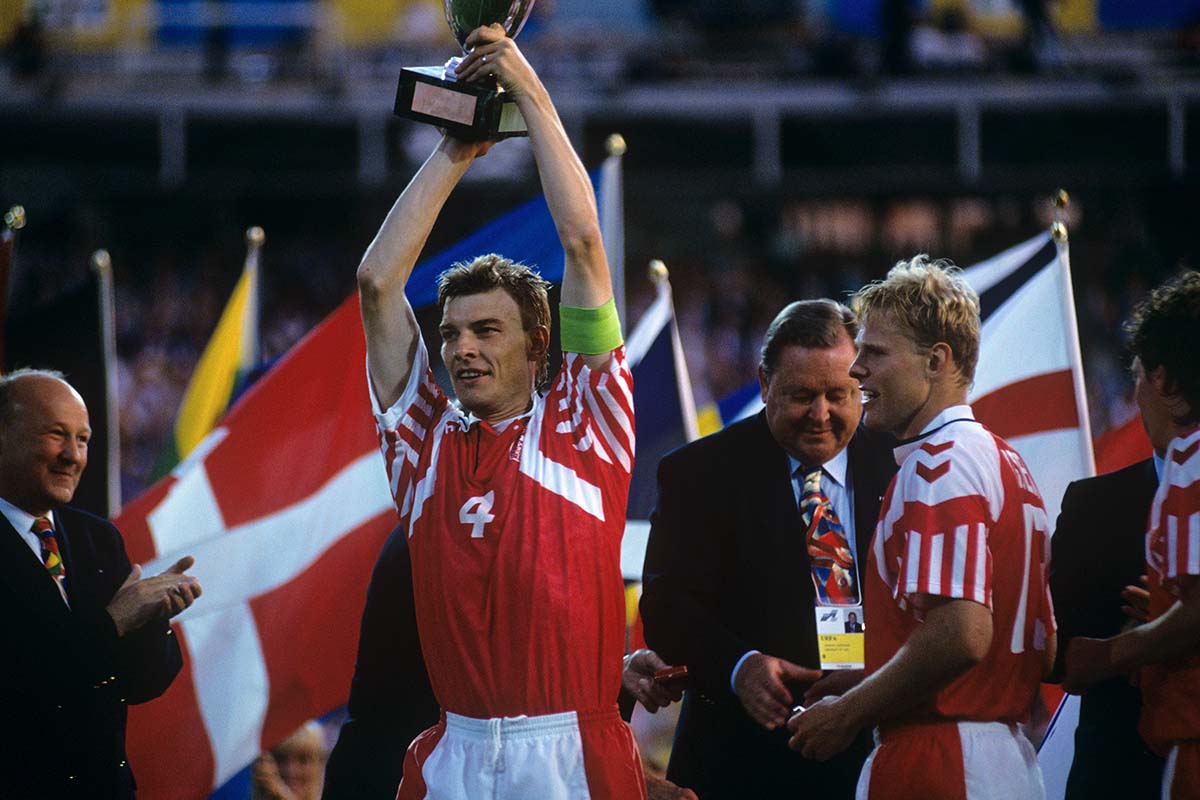 In contrast to France vs. Yugoslavia, this match does not live long in the memory for being a thrilling, back and forth goalfest. Instead, it serves as the culminations of one of football’s great underdog stories.

Not only were the Dane’s nobody’s pre-tournament pick to win Euro 92, but they were not even supposed to be there. They had been famously pulled away from their summer Holidays and asked to replace Yugoslavia – who had been disqualified as a result of ongoing warfare in their country – with only 10 days’ notice.

Denmark progressed through the group phase to meet the Netherlands in the semi-final of the eight-team tournament. A 2-2 draw saw the game go to penalties, where Peter Schmeichel’s save from Marco van Basten proved decisive. The Dane’s would then face word champions Germany in the final.

Richard Møller Nielsen’s men took an 18th minute lead thanks to a rare goal from former Arsenal midfielder John Jensen. The Germans – who at the time could count such world renowned stars as Jürgen Klinsmann, Karl-Heinz Riedle and Thomas Häßler among their number — proceeded to bombard Schmeichel’s goal, but the Manchester United goalkeeper was equal to everything they threw at him.

Then, with 12 minutes to play, Kim Vilfort sealed one of the most unbelievable fairytale stories in football history, by scoring to give Denmark an unassailable 2-0 lead.

Denmark’s Euro 92 victory is made all the more astounding when you consider they triumphed without their greatest ever player, as Michael Laudrup had retired from international football in 1990, due to differences with Møller Nielsen, and declined to reverse his decision when the Dane’s were drafted in to replace Yugoslavia. 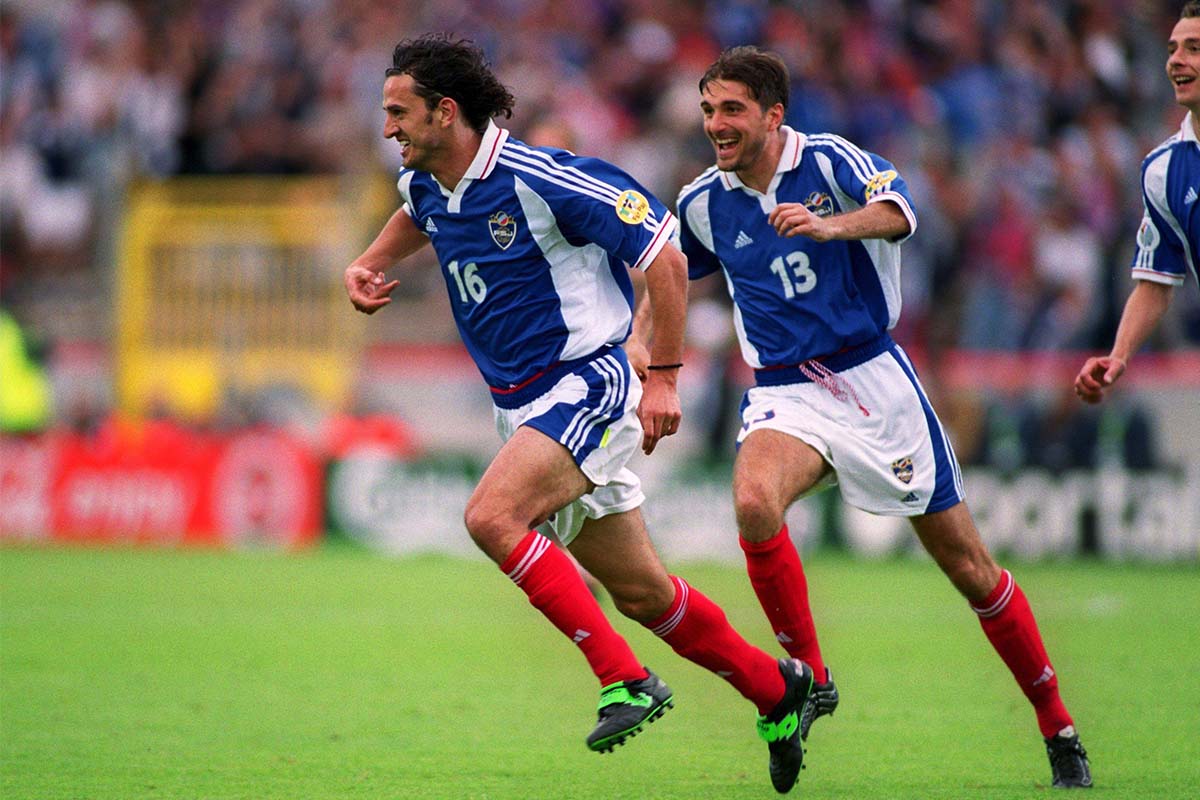 Although this game lacks the romance and high-stakes of Denmark’s incredible win, it is a classic nonetheless.

Spain went into the match needing to beat Yugoslavia to progress from the group and, as stoppage time approached, they found themselves trailing 3-2 against a side who had been playing with 10 men since Slaviša Jokanović 68th minute dismissal. All hope seemingly lost.

But when Valencia midfielder Gaizka Mendieta netted a penalty in the 94th minute, a small ray of hope began to shine on José Antonio Camacho’s men.

And with seconds remaining on the clock, former Real Betis and FC Barcelona striker Alfonso scored to steal it for Spain, and send La Roja through as group winners.

In 1984, French midfielder Michel Platini was arguably the best player in the world, and the European Championship on home soil – much in the way the 1998 World Cup would be for Zinedine Zidane 14 years later – was the perfect opportunity for the Juventus player to make a major tournament his own.

Group stage hat-trick in victories over Belgium and Yugoslavia had already set Platini well on the way to doing so, and had put France into the semi-final where they’d face Portugal.

The Portuguese were competing in their first ever Euro, and came within a hair’s breadth of reaching the final having gone toe-to-toe with France over 90 minutes. Jean-François Domergue of France, and Rui Jordão for the Portuguese, each netted their second goals of the game in the extra-time period to make it 2-2. All signs were pointing toward this one being settled by penalties.

But Platini had other ideas, as he skilfully slotted home Jean Tigana’s cross in the 119th minute – seconds before a penalty-shootout would’ve been declared.

France went on to beat Spain 2-0 in the final with Platini again on the scoresheet, taking his Euro 84 tally to nine goals from five games – not bad for a midfielder.

If Platini was the star in 1984, then van Basten was the man in ’88. The AC Milan striker was the standout performer in a Dutch side packed with immense talent – which included club-mates Ruud Gullit and Frank Rijkaard, as well as PSV’s Ronald Koeman.

It wasn’t all plain sailing for Rinus Michels’ Netherlands team however, as they fell to defeat in their opening game, losing 1-0 to the Soviet Union.

But a bounce-back 3-1 victory over England – thanks to a van Basten Hat-trick – and a 1-0 win over the Republic of Ireland saw the Dutch through to the semis.

And in the semi-final, the Netherlands vanquished their great rivals West Germany, winning a tight encounter 2-1.

So onto the final and a chance to avenge their opening match defeat against the Soviets. Moreover, Michels had a chance to go one better than his famous 1974 World Cup runners-up – the exponents of Total Football.

If there were any nerves for the Netherlands – the perennial bridesmaids of international football – they were settled just after half-an-hour, as Gullit headed them into the lead.

But the crowning moment of this final, and perhaps one of the single greatest displays of technique in any major final, came in the 54th minute.

In a career sadly truncated by injury, van Basten scored 301 goals – some of which were utterly spectacular. But in the Euro 88 final, he scored what was unquestionably his greatest. It was a goal that will long be remembered as one of the finest ever scored.

Arnold Muhren’s looping cross toward the back post seemed to be of little immediate threat to the Soviet defence. But as van Basten pulled away beyond the corner of the six-yard box, his gaze never shifted from the falling ball.

Judging the trajectory of Muhren’s cross perfectly, van Basten connected with his right-boot, unleashing a volley — with both feet off the ground – about 15 yards from goal, from an angle in which only a cross would be feasible.

As van Basten’s volley flew past Rinat Dasayev, the Soviet Union’s goalkeeper and captain, and into the far corner, the Olympiastadion in Munich was momentarily stunned to near-silence, with fans scarcely able to comprehend what they had just witnessed.

A phenomenal goal from a legendary player, sealing victory for an iconic team.