There is a temptation to forget, given the numerous rumours regarding potential arrivals at Manchester United this summer, that the current squad need to buck up their ideas if the Ole Gunnar Solskjær reign is to avoid the same grim denouement which befell his three immediate predecessors.

The main takeaway from United's 2018/19 season was that too many players were underperforming; too many of the club's overpaid stars had failed to deliver.

The positives were few and far between. Luke Shaw, who couldn't get a look-in under José Mourinho once upon a time, was named Player of the Year, Scott McTominay‘s emergence was heartening while Victor Lindelöf, Paul Pogba and Marcus Rashford were effective in their roles – for the most part at least.

However, the prospective raft of new recruits this summer will force some of Solskjær's squad to sharpen up and fight for their place in the team.

Signed from Villarreal in 2016, Bailly's United career offered much promise after an assured start to life in England saw him named the club's Player of the Month for August.

However, serious injuries and inconsistency have combined to jeopardise his future at the club. An ankle problem ravaged much of his 2018/19 campaign, but he had already lost his place under Mourinho following a shaky display in the defeat at Brighton & Hove Albion, in which he conceded a penalty after recklessly lunging in on Pascal Groß.

He was also sent off in one of Solskjær's first games in charge – the 4-1 win over Bournemouth – for a rash challenge on Ryan Fraser.

The 25-year-old was barely seen in the starting XI after that and, with United targeting a centre-back this summer, the Ivorian must show he has the composure and consistency to follow in Lindelöf's footsteps and become a mainstay in defence.

Many United fans still shudder at the memory of Nemanja Matić's unnervingly immobile displays in front of the defence last season. Given he will turn 31 before the start of the season, it's unlikely the Serbian will improve dramatically.

Fred, meanwhile, is on borrowed time after a blundersome debut campaign at United. The Brazilian, signed from Shakhtar Donetsk for £52million, failed to establish himself as a first-team regular, with high-profile errors leading some to question his credentials as a future first-teamer.

For all his energy and enthusiasm in the middle of the park, the 25-year-old was just too clumsy. He started brightly at Arsenal but killed United's chances of snatching a point when he conceded a penalty by clipping Alexandre Lacazette. Then, his indecision led to him losing possession in the build-up to Wolves' equaliser at Molineux in April.

Fred managed only 13 Premier League starts but he was substituted before the end in eight of those. Given his fee, the South American needs to produce more during his sophomore year.

United's biggest earner, biggest flop and, in truth, their biggest problem. The Chilean has endured a nightmare 18 months since arriving from Arsenal, his astronomical wages exposing him to brutal criticism from fans, pundits and writers alike.

Given his salary demands, Sánchez will most likely remain at United beyond the summer. Simply put, he is in the last-chance saloon as he attempts to salvage a once impressive Premier League career.

Perennially injured, the 30-year-old managed a paltry 880 minutes of Premier League action in 2018/19, scoring once. News of his inclusion in Chile's Copa América squad, despite hobbling off in pain against Huddersfield, is disconcerting.

Suggestions his continuous involvement in summer tournaments –  this will be his fourth Copa having also participated in two World Cups – have accelerated his decline will only intensify if he fails to hit the mark once again next season.

There is hope, of course. Somewhere beyond the grimaces and laboured running is a great player, one who managed 72 goals in his first three seasons at Arsenal. The chances of that menacing forward re-emerging are slim, admittedly, but certainly not inconceivable.

For a while under Mourinho, Lingard was one of United's most effective players. Indeed, the 2017/18 campaign produced eight goals and five assists, enough to seal his place in England's World Cup squad.

And while injuries have played their part, the 26-year-old's output has waned. In 2018/19, he was averaging fewer goals, assists, shots and touches in the opposition box compared to the previous campaign. His xG per 90 also dropped significantly from 0.39 to 0.26. 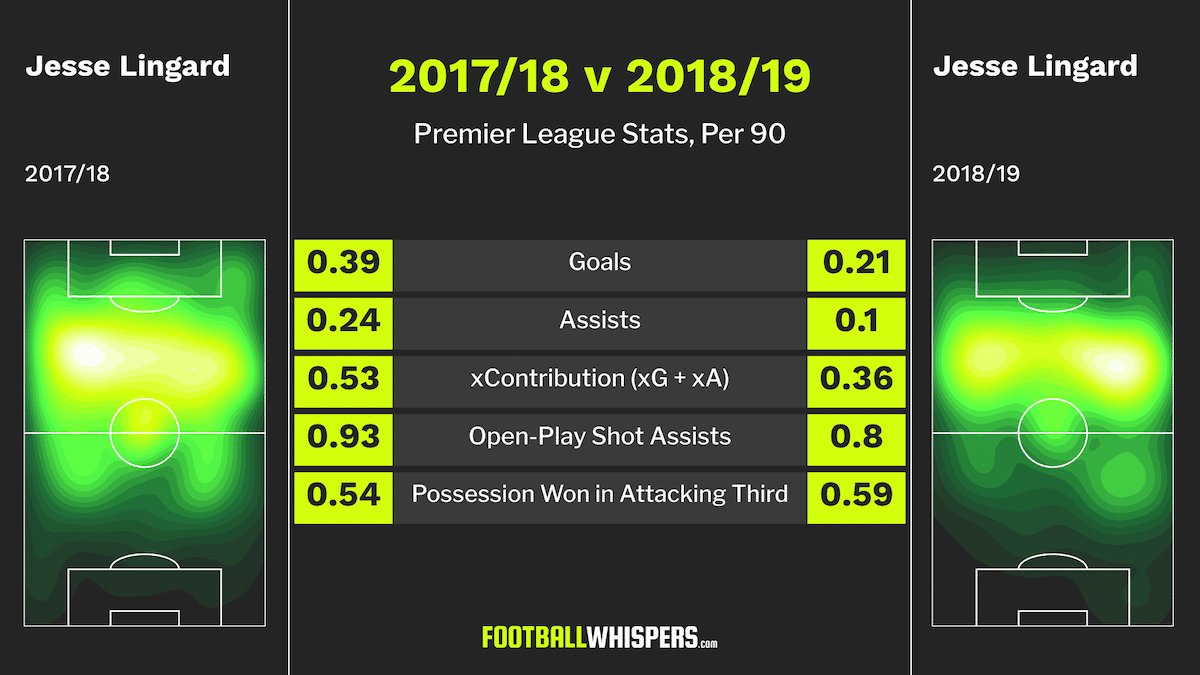 His biggest worry, perhaps, is the arrival of Daniel James. The 21-year-old speed merchant will be keen to make an immediate impression after his move from Swansea City and, considering they both primarily occupy wide areas, it will cast doubt over Solskjær's plans for Lingard.

Unlike some of the other players on this list, Lingard's status as a homegrown lad who's delivered several impressive performances certainly banks him some goodwill. However, in the current bleak landscape, that will not spare him for much longer. United can no longer rely on squad players; they need matchwinners.

The Frenchman endured another intensely frustrating year at Old Trafford, starting fewer than half of United's 38 Premier League games for the third season running.

While the 23-year-old netted ten times, his last goal came in March and was wholly ineffective in the defeats to Barcelona, Everton and Cardiff City. 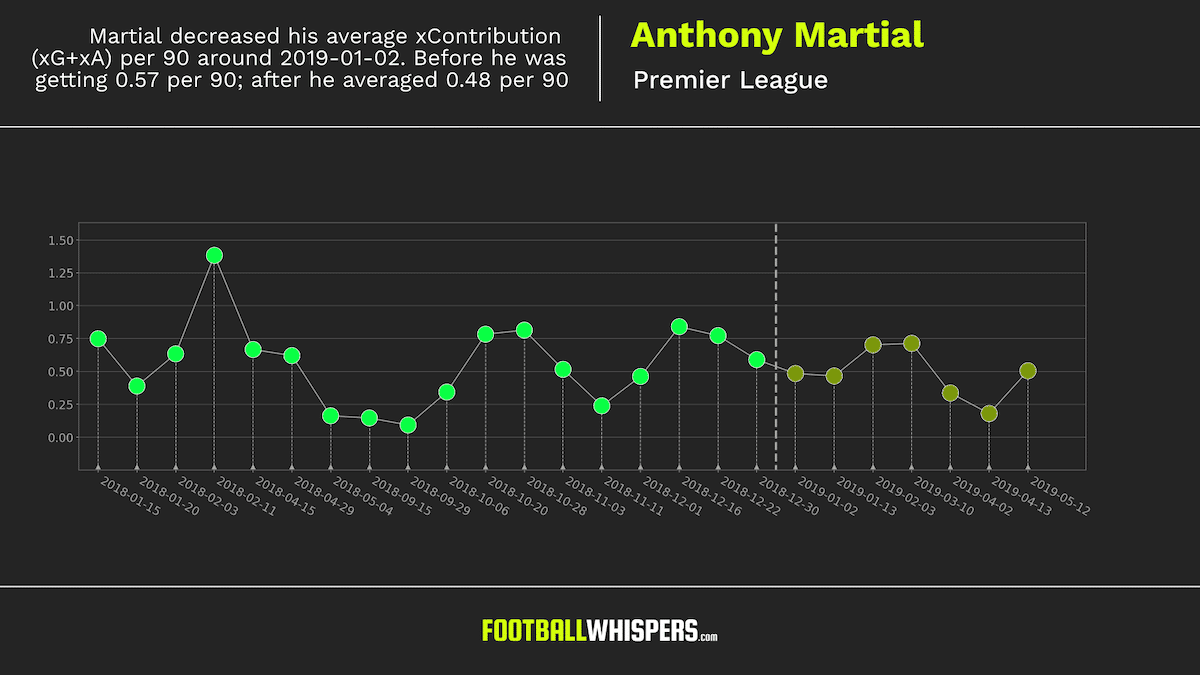 Martial's season was far from an unmitigated disaster, granted, but given he was widely regarded as one of world football's most exciting prospects when the Red Devils signed him in 2015, he has yet to replicate the form which led to a 17-goal haul in his first season at Old Trafford.

The common opinion of Martial is that his demeanour does not scream a player desperately trying to prove himself.

His natural ability as a fleet-footed winger capable of scoring and creating goals means there will still be a sense of excitement as to how he can flourish under Solskjær, but he certainly needs to produce more than he has over the last few years.