Heading into the 2017/18 season, not many people believed Brighton and Hove Albion would retain their place in the Premier League.

The Seagulls were one of the favourites to be relegated but with just nine games of the campaign remaining they find themselves in tenth position and just six points shy of seventh.

Chris Hughton should be in with a shout for Manager of the Year and Pascal Groß, as discussed here, is by far the bargain of the season.

That combination of a tactically astute manager and a recruitment team that can identify quality players who don't break the bank – a rare skill in the modern market – has and will continue to serve Brighton well.

And, according to Le10Sport, the Seagulls are looking to exploit Ligue 1 to bring undervalued talent to the Amex stadium ahead of their second campaign in the English top flight.

With this in mind, we've taken a look at five Ligue 1 talents that Brighton could target in the summer to strengthen their squad.

We've tried to keep the search to areas of the team we know they're looking to improve – for example, Hughton's men have been linked with Ibrahim Amadou of Lille.

The versatile 24-year-old can play in midfield as well as in defence and this link shows the Seagulls are in the market for a defensively minded midfielder to rival Davy Pröpper and Dale Stephens.

Le10Sport also linked Hughton's men with a move for Strasbourg midfielder Jean Eudes Aholou so he's on the list. And to accompany these two players we've picked out Andre-Frank Zambo Anguissa.

It was revealed in the French press in January that an unnamed Premier League club had a bid rejected for the 22-year-old Marseille midfielder last summer. Could that team have been Brighton? Perhaps.

The trio all play similar roles for their sides. They're defensive midfielders who rarely have an impact offensively. But who would be suit the Seagulls? 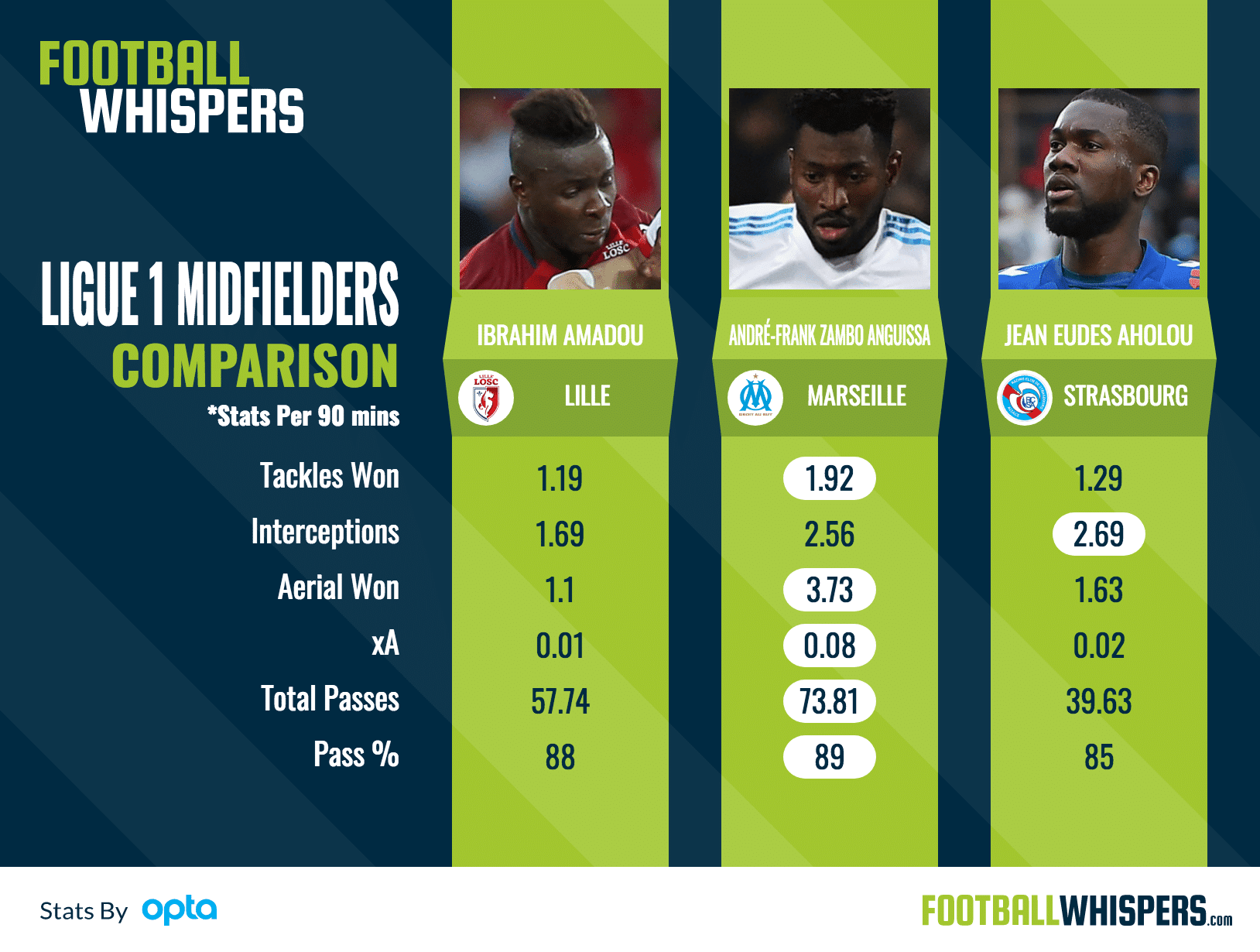 Before reading too much into these stats you need to take into account the teams they're playing for. Amadou and Aholou are in teams fighting relegation, while Anguissa is in a Marseille side battling for second in Ligue 1.

That will no doubt have an impact on the numbers they are posting. However, what you can see is that Anguissa is the dominant performer.

He's winning more tackles and more aerial duels. He's just behind when it comes to interceptions but his numbers show he is a player who covers a lot ground and does a lot of the dirty work for his team.

In terms of passes per 90 he tops the charts and his pass percentage is the highest of the trio. This stat needs more context, however. While many defensive midfielders play short passes, the Brighton midfielders, while classy in possession, are often quite direct.

So what should be taken into account is how Anguissa would fare when he's seeing less of the ball. He's playing 68 per cent of his 73.81 passes forward for Marseille, would it remain that high if he's attempting fewer passes? It's unlikely.

It is believed Lille want in the region of £16million for their captain and Marseille would demand a similar fee for the impressive Anguissa. But, according to reports, Strasbourg would accept around the £8million mark for Aholou, and that could be a factor. 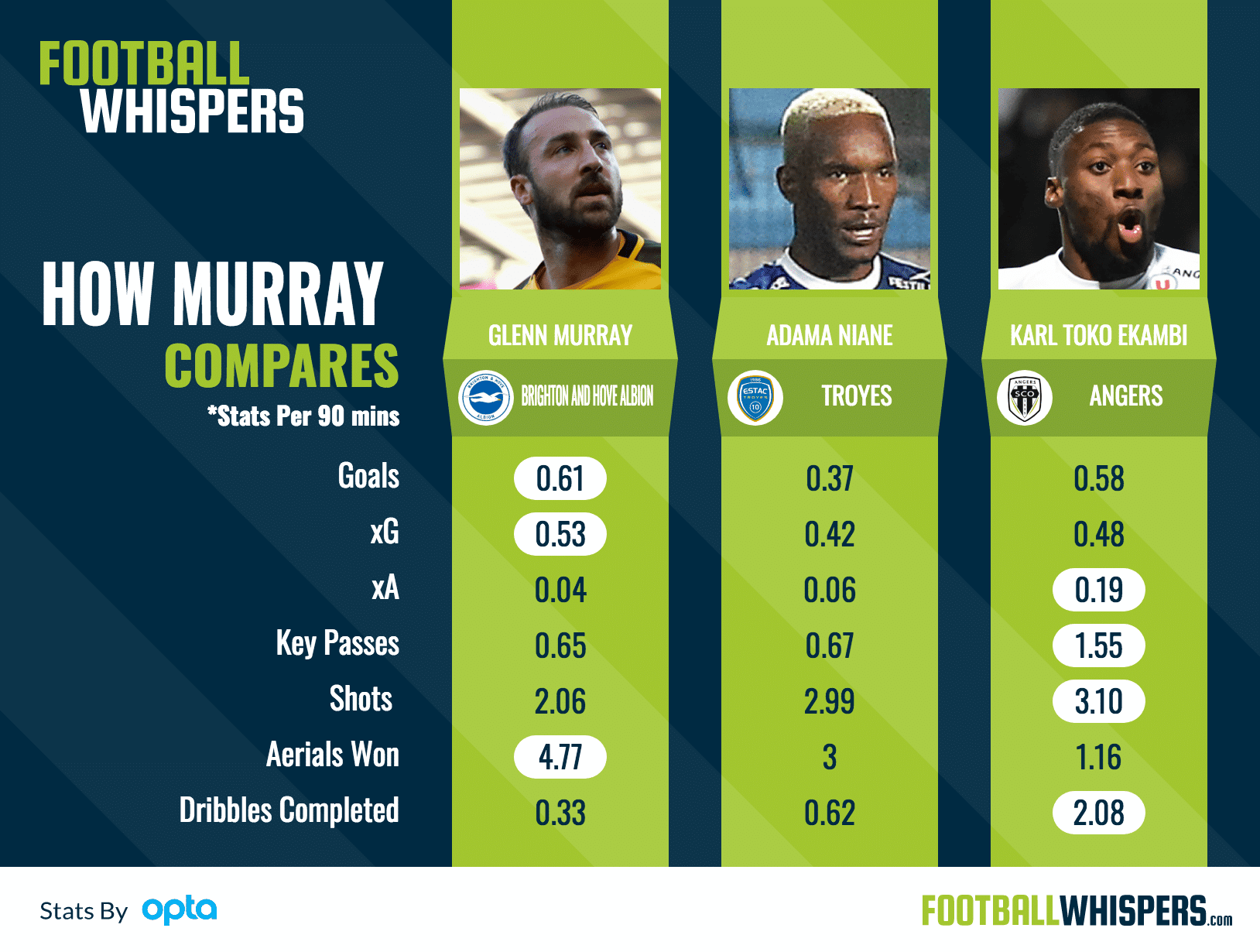 Glenn Murray has been in fine form for the Seagulls this season. He's the club's top scorer with 11 Premier League goals and his performances have helped get the best out of José Izquierdo. There's even talk that he should be named in the England squad for their upcoming friendlies.

However, Murray is coming to the end of his career and at 34 years old it's not wise to build an attack around him. Yes, the club signed Jürgen Locadia in January but another attacker is needed.

Brighton saw a bid of around €16million turned down for Karl Toko Ekambi during the winter window. And you can understand why given he's been one of the best forwards in France this season.

And, when looking at the graphic above, you see he's not far behind Murray in terms of goals scored per 90 and xG90. It means he's getting in dangerous areas and he's converting his chances.

Ekambi comes out on top in every other category apart from aerial duels won, but that could be down to the style of football Angers play.

Adama Niane would be a cheaper alternative to Ekambi. He's not as productive but he is playing for a team who sit 18th in Ligue 1 and have scored the third fewest amount of goals this season.

The 24-year-old wins an impressive three aerial duels per 90 minutes meaning he could replicate Murray's style and impact on the team in that sense.

He'd be cheaper than Ekambi and a good squad option to have if Hughton wants to make Locadia his main forward next season.