Manchester United left-back Luke Shaw has come in for some stern public criticism from manager José Mourinho in recent days, with the Portuguese manager seemingly disappointed with the level of effort and application he is seeing from the former Southampton star.

But Shaw spoke to the press this week to reiterate his desire to remain at Old Trafford, making clear his commitment the club and its fans.

“I will fight to the last second because I want to be here for the club,” Shaw told the Press Association. “I want to play for the manager and I want to help this team get back to the top.

“The fans have been so good to me and, like I said, especially the last sort of two days. That’s why I love them. It is easy for them to see those comments and turn on me, do you know what I mean?

“But the passion they have always shown to me is amazing and something I don’t and won’t forget for a long time because it means a lot to me. I don’t want to let them down and I’ll fight for each and every one of the fans as well.” 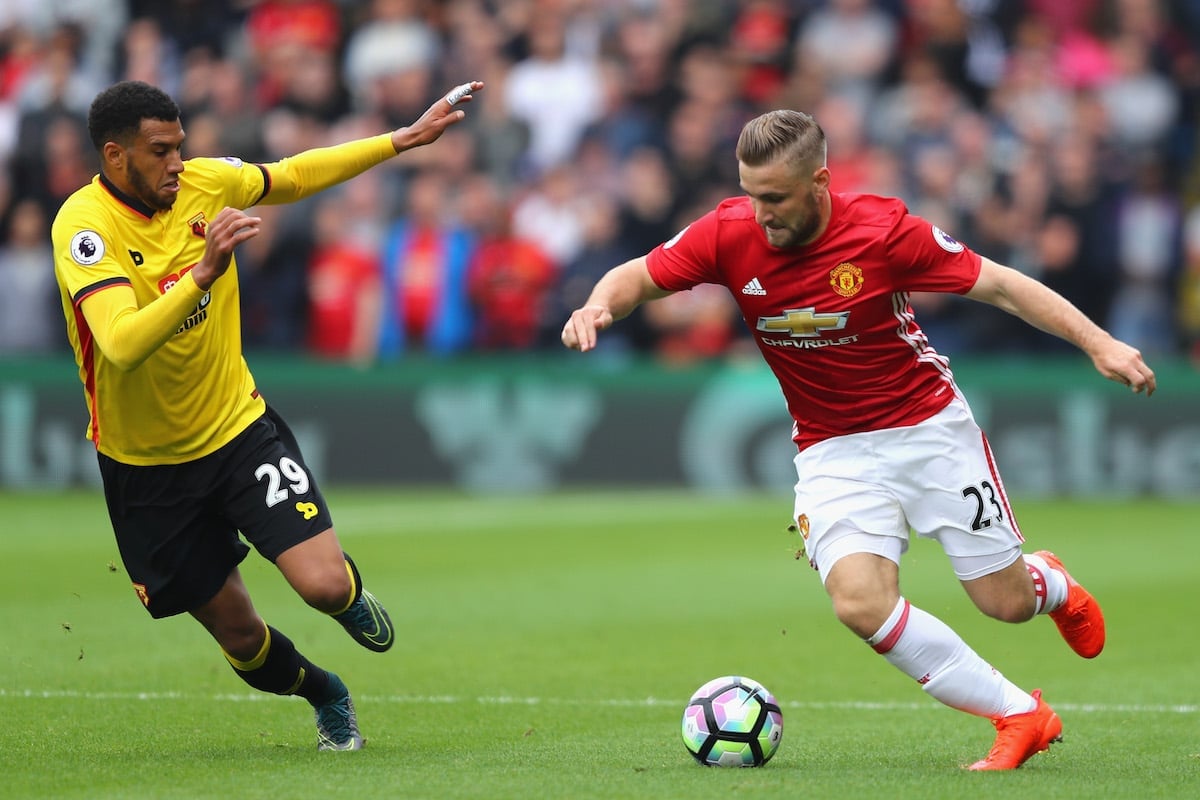 read more: 5 reasons José mourinho should not give up on luke shaw

However, in a report published by Yahoo Sport last week, journalist Duncan Castles, who is known to have close connections within Mourinho’s entourage, claimed that United will be on the lookout for a new left-back this summer.

If the former Chelsea and Inter Milan boss has already made up his mind to sell Shaw at the end of the season, here are five left-backs who could find themselves becoming Manchester United transfer targets. 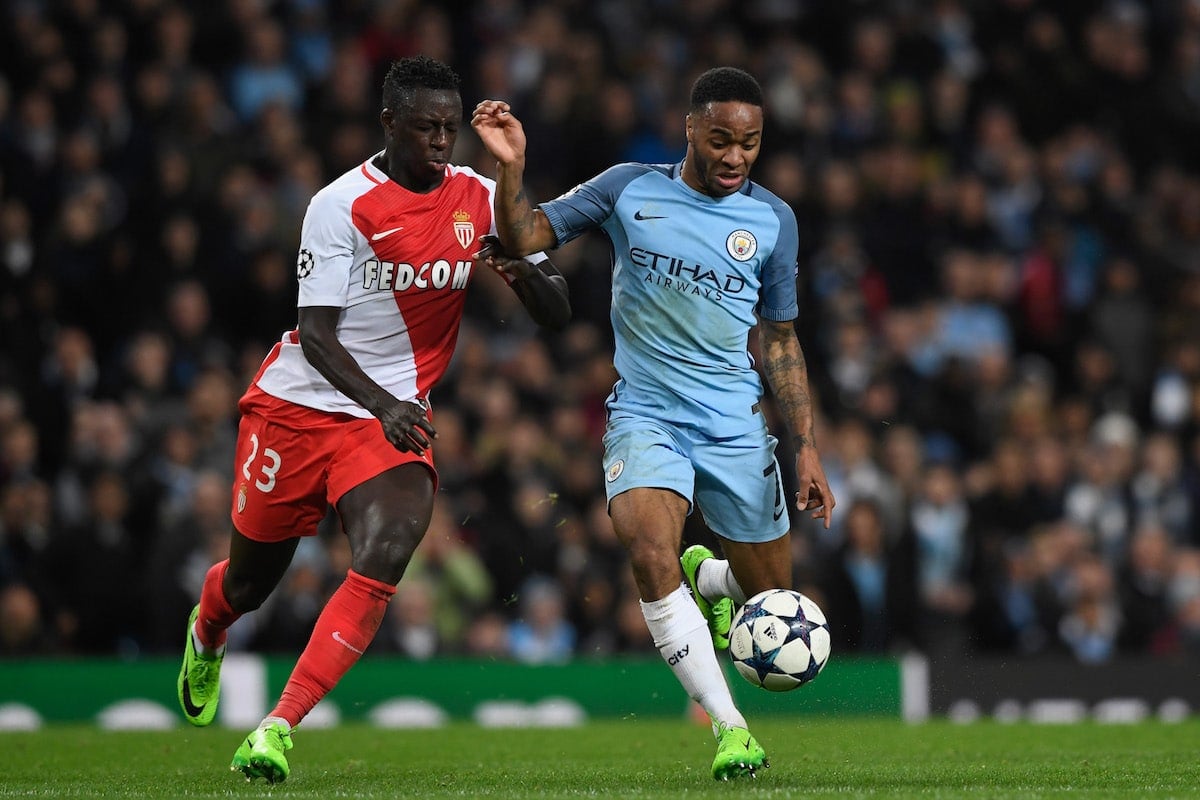 Following an £11million move from Marseille last summer, Benjamin Mendy has earned widespread acclaim for his performances for Ligue 1 leaders Monaco this season, leading to a senior France debut against Luxembourg in March.

The 22-year-old was outstanding in the second leg of the Principality club’s Champions League last-16 victory over Manchester City, providing pace, power and threatening deliveries down the left flank all game.

Yet to bag his first league goal for Monaco — although he has notched in the Coupe de France — the former Le Havre youngster has registered five assists so far this term.

At 6’ 1” and incredibly fast and athletic, Mendy has all of the physical tools to succeed in the Premier League. But thanks to their success this season and the fact that they will be bracing themselves for a raid on their key stars, Monaco will not allow the full-back to leave cheaply. 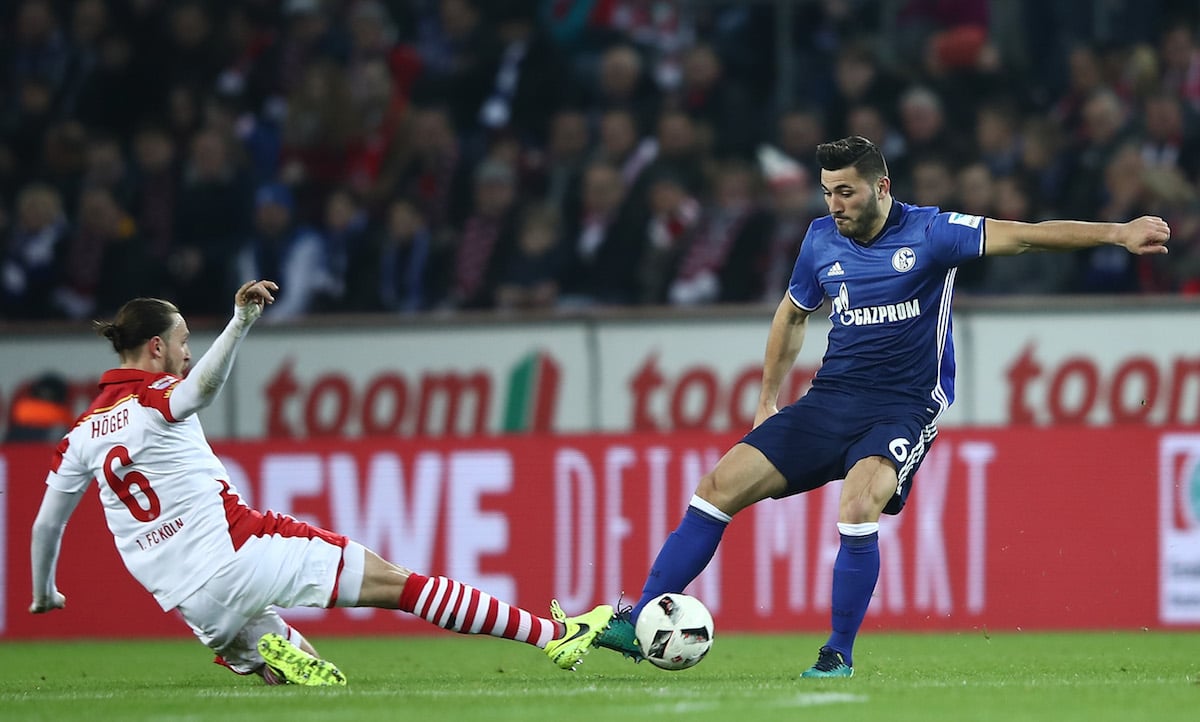 Schake left-back Sead Kolašinac has been the subject of frenzied transfer speculation in the last few weeks owing to the fact that his contract with the Bundesliga club expires this summer.

The player’s agent has claimed that the Germany-born Bosnian international has received contract offers from six clubs, with Premier League powerhouses Chelsea, Manchester City Liverpool and Tottenham Hotspur all thought to be interested in snapping up the soon-to-be-free-agent.

Kolašinac has been in fine fettle for Schlake this term, producing an impressive return of three goals and five assists in 20 Bundesliga outings.

Capable of playing further forward as a winger if needed, the 23-year-old represents a dangerous proposition for opposing teams when breaking forward to join the attack. As well as being able to overlap the winger in front of him and whip crosses into the box, Kolašinac is also adept at moving into the half-space between the opposition’s right-back and centre-half, making him a difficult man to pick up.

Like Mendy, Kolašinac trails Shaw when it comes to pass completion, picking out a team-mate with just 71 per cent of his passes. But with 2.9 tackles, four interceptions and 1.2 key passes per 90 minutes, the Schalke defender betters the 21-year-old England international in many metrics. 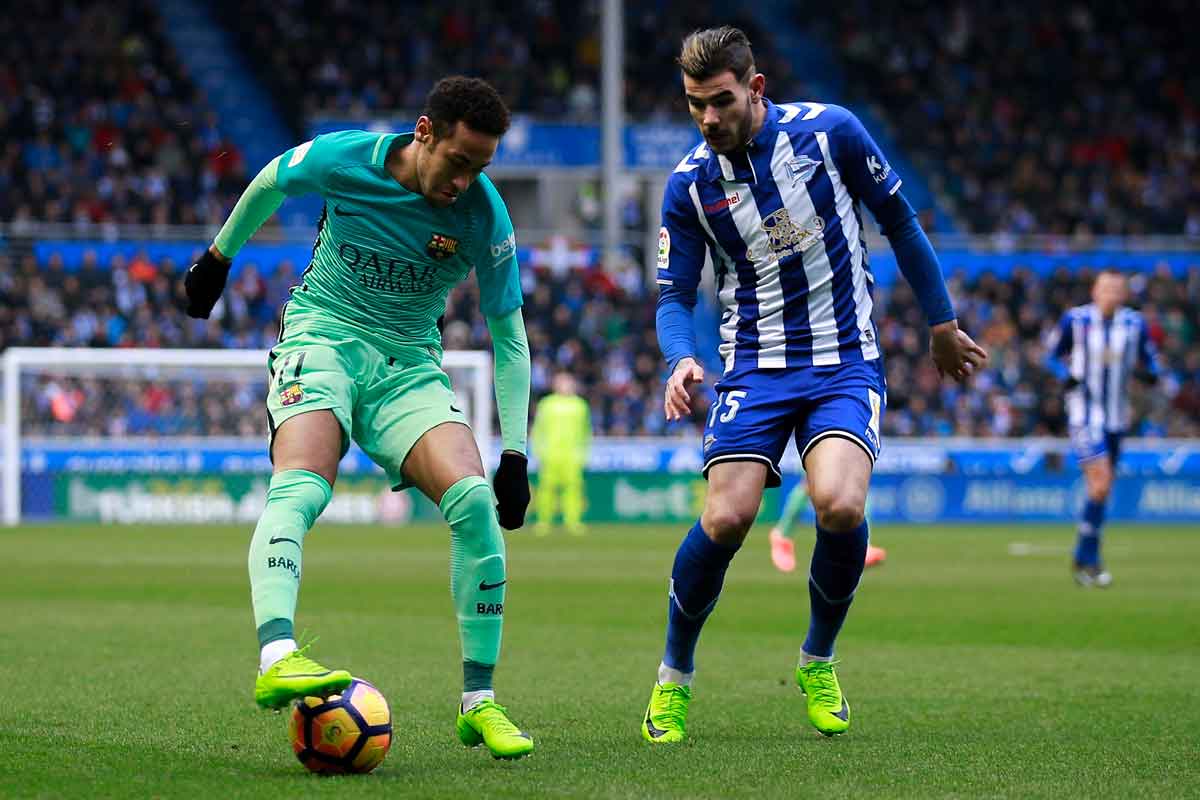 Thought to be on the verge of sealing a summer move to Real Madrid, United would have to move very quickly if they hope to poach 19-year-old French full-back Theo Hernández.

Currently on loan with Deportivo Alavés, the teenager has so impressed with the newly-promoted side this term that the European champions are willing to break an unwritten rule of not signing players directly from Atléti by triggering the youngster’s €24million buyout clause.

Also believed to be a Manchester City transfer target, Hernández, is blessed with tremendous pace and capable of delivering chance-creating, curling crosses from out wide.

Hernández, whose older brother Lucas is a member of Atlético’s first-team squad, has played 25 times in La Liga this term and contributed three assists. With an 80.2 per cent pass accuracy which is comparable to Shaw’s, the France under-20 international is technically gifted while also developing a greater understanding of the defensive duties inherent in his role, making two tackles, 1.4 interceptions and blocking 0.6 crosses per 90 minutes. 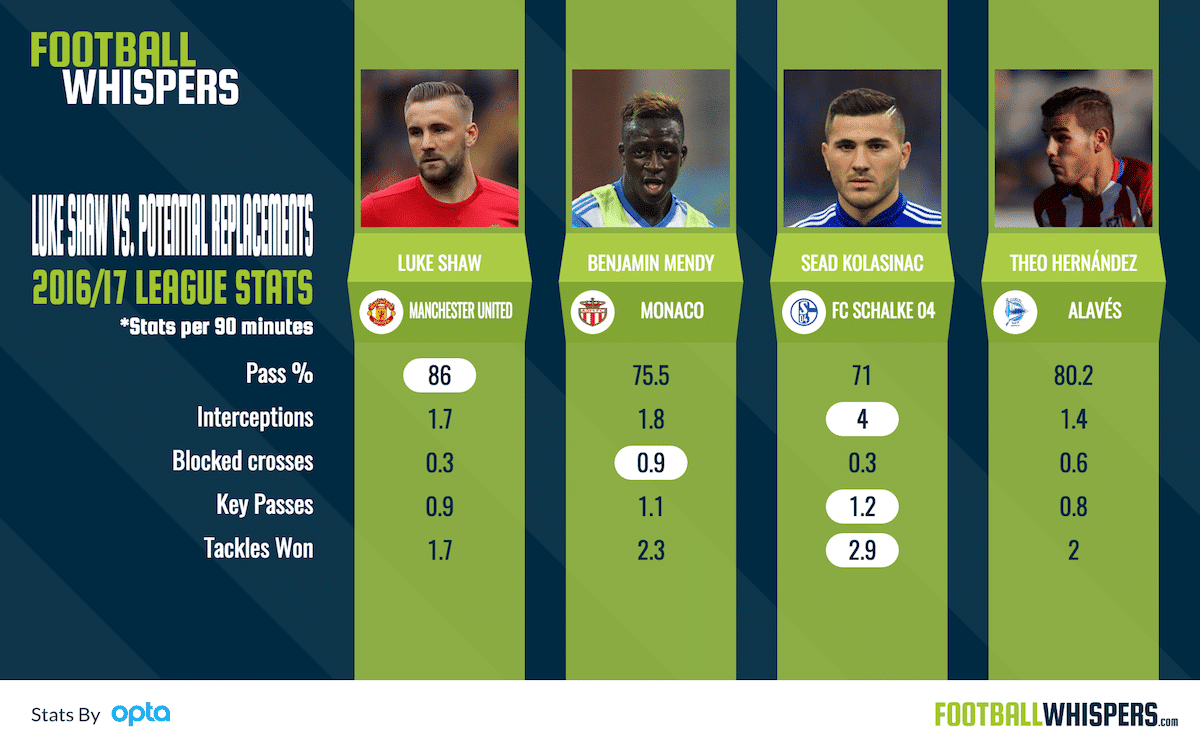 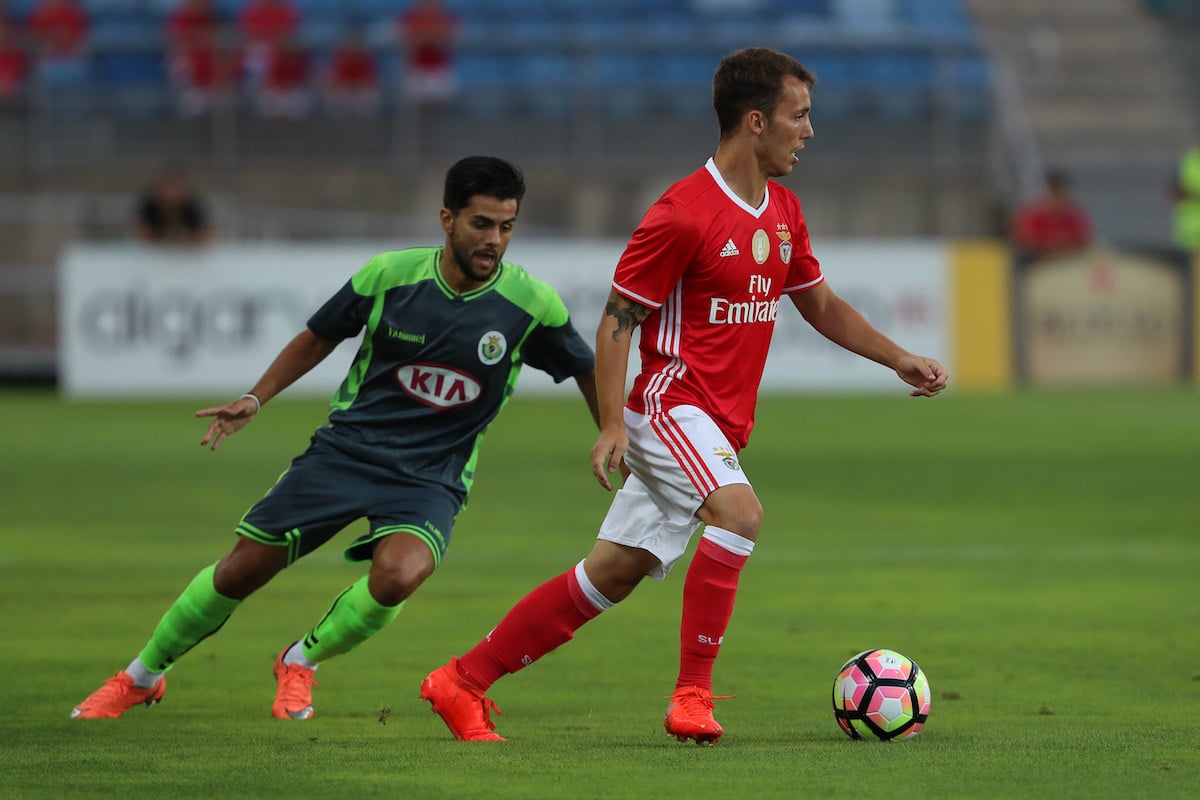 An injury suffered in November has limited Alejandro “Álex” Grimaldo to just 13 appearances in all competitions for Benfica this term. But, due to return to first-team action this month, there is sure to be plenty of interest in the 21-year-old Spaniard over the summer.

A reported target for Pep Guardiola’s Citizens, Grimaldo impressed for Benfica last term having joined the Portuguese club from Barcelona in January 2016.

Despite his long injury layoff, the Spain under-21 international’s 713 minutes of Liga NOS action this season means he has seen more playing time that Shaw has in the Premier League (622 minutes).

With 80.4 per cent pass accuracy, 1.5 key passes and one successful take-on per 90, Grimaldo is very much in the mould of the modern, attack-minded full-back. With two goals and two assists to his name, the Barcelona academy graduate has been directly involved in a goal every 178.25 minutes. 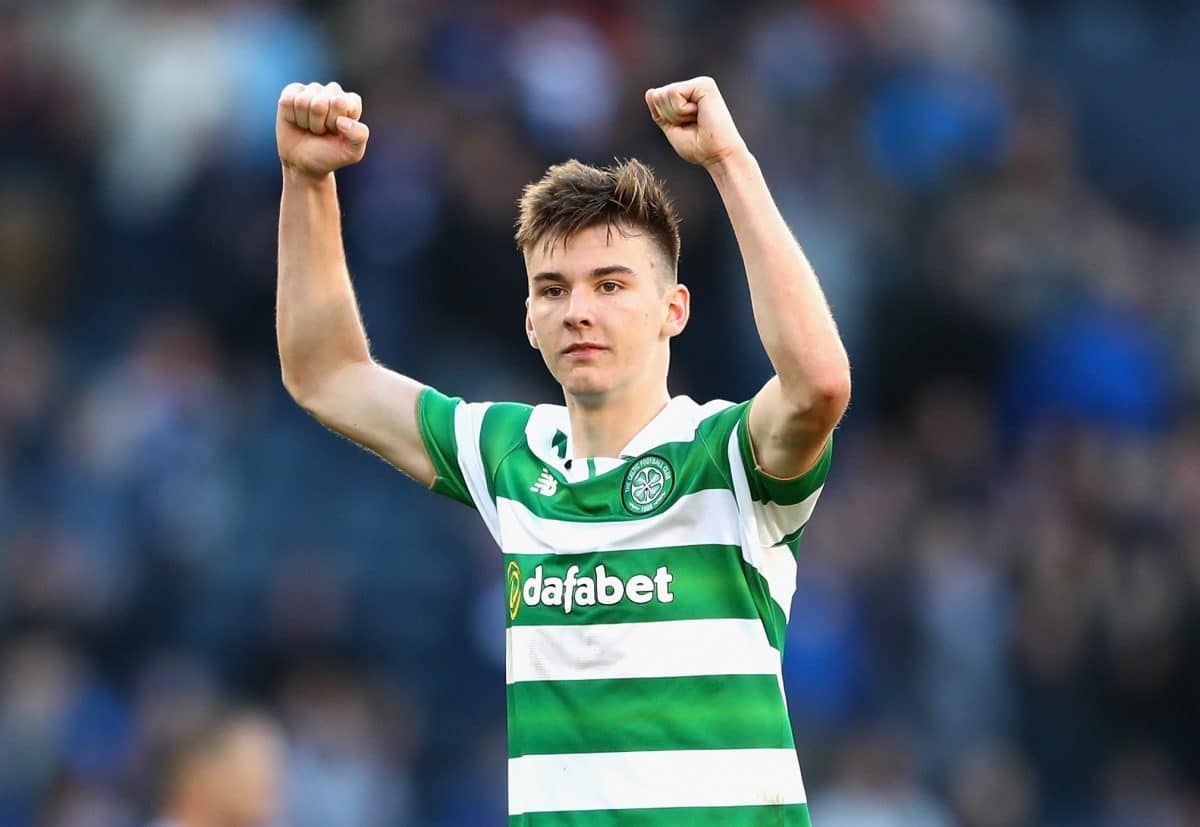 Despite being only 19 years old, Celtic left-back Kieran Tierney has already racked up 65 senior appearances for the Hoops as well as three international caps for Scotland.

Widely tipped for a move to the Premier League in the near future, the £15million-rated youngster is believed to be on Mourinho’s radar as a possible replacement for Shaw.

With no detailed Scottish Premier League stats available, we can only judge Tierney by his performances in the Champions League, which will skew his output as Celtic were very much underdogs during this season’s group stage.

Therefore, his pass accuracy of 68.6 per cent shouldn’t be held against him. However, in spite of the Glasgow club’s struggles in Europe’s premier club competition, Tierney’s return of two tackles, 1.7 interceptions and 0.3 crosses blocked per 90 minutes is evidence of his potential.