When Manchester City spent £120million on full-backs in the summer Pep Guardiola's logic was questioned. The Citizens, after all, had four perfectly adequate players in those positions on their books until the Catalan released them.

That's why former Barcelona coach Guardiola sanctioned the signings of Kyle Walker, Danilo and Benjamin Mendy. As City's swashbuckling style took them to the Premier League's summit, it quickly became apparent why such an emphasis had been placed on the two full-back positions.

But despite their recruitment drive, City always looked short on the left. And so it proved when the highly-impressive Mendy, whose raids down the left were a feature of the early weeks, was ruled out for much of the season with knee ligament damage.

However, a solution quickly rode to the rescue in the shape of Fabian Delph. Near the bottom of the pecking order as a central midfielder, the England international reinvented himself as a buccaneering left-back.

But with City riding high at the summit, fate has intervened once more. Delph left Anfield on crutches with his knee in a brace after Manchester City's first defeat of the season at the hands of Liverpool on Sunday.

The prognosis is not good. “He will be out, I think, for a while,” Guardiola said after defeat at Anfield. “I don’t know if it will be a lot of time but he will be out for a while. It is his knee, he turned his knee.”

It had looked set to the be a quiet January transfer window with long-term Manchester City transfer target Alexis Sánchez seemingly bound for rivals Manchester United.

But Guardiola could be pressed into making a signing in order to plug the gaping hole at left-back. We assess five potential targets for the former Barça coach and one player who could deputise for the Citizens.

The Tottenham Hotspur left-back has been at pains to play down talk of a rift with coach Mauricio Pochettino this season but his denials have been unconvincing.

Rose has made just five Premier League starts this season after recovering from a long-term injury, the last of which came in the 5-2 win over Southampton on Boxing Day and he has not been in the match-day squad since.

In truth the writing has been on the wall since an explosive interview with The Sun last summer in which he criticised Tottenham's recruitment and ambition. Linked with Manchester United, City would offer the England international a shot at silverware.

A converted winger, Rose has exactly the qualities Guardiola would look for. His first instinct is to attack and he has completed 1.6 dribbles on average per game this season, as well as making 1.2 key passes.

One of the stars of Celta Vigo‘s run to the Europa League semi-finals last season, Jonny and co. were beaten by eventual winners Manchester United.

And he suffered further heartbreak in the summer as part of the Spain side beaten by Germany in the Under-21 European Championships final in Poland.

The 23-year-old has shown his undoubted potential in that time, though, and would represent something of a project for Guardiola. While all players coming under the Catalan's tutelage for the first time are guaranteed an education, Otto is raw.

A culture defender who came through the club's youth setup, Jonny told Estadio Deportivo last December that he would have to leave Celta in order to fulfil his ambitions. The 24-year-old's contract has an €18million release clause which would present no obstacle for City.

Another left-back plying his trade in La Liga is Valencia's Gayà. The 22-year-old, who is reportedly a Juventus transfer target already, is one of Los Che's prized assets.

A product of Valencia's academy, the 5ft 7ins full-back started his career as a striker. So it should come as little surprise he is comfortable going forward. An accomplished crosser of the ball, Gayà has provided 0.9 key passes per game this season and picked up three assists in the process.

Gayà very nearly joined Real Madrid for €30million in 2015 but Valencia supporters piled pressure on the young defender to remain with the club and he eventually did, signing a deal until 2020 which includes a €50million release clause.

That won't be enough to put City off, though. Although injuries have hampered the former Spain Under-21 international's progress, he has the quality to eventually depose Barcelona‘s Jordi Alba as Spain's first-choice No.3.

Austrian international Alaba would be something of a long shot. However, there is a glimmer of hope for City in the fact Alaba played under Guardiola during his time at Bayern Munich.

Ironically it was at a youth tournament in Manchester that the 25-year-old was first spotted by Bayern scout Wener Kern. “David is an exceptional talent with an excellent attitude, said Kern. “We think he can go very far.”

Kern was proven right and, after twice rejecting Die Roten, he joined from Austrian Wien in 2008 and has become a key player since.

Another player who has a grounding playing further forward, the Vienna native still regularly plays in midfield for his country. “He's a left-back, even though he doesn't think so himself,” said former Bayern and Manchester United boss Louis van Gaal.

Alaba's stats for this season are the least impressive by a distance but the Austrian has made just nine Bundesliga starts due to injury in the autumn. He is seen as one of the world's best in his position and would command a fee to reflect that if Bayern were to sell.

The 24-year-old left-back has been one of the break-out stars of the Bundesliga season, registering an astonishing nine assists for Augsburg – more than any other player in Germany's top flight.

Unsurprisingly that form has seen Max linked with a move to the Premier League already with Manchester United, Liverpool, Tottenham and Everton joining Manchester City in the race for his signature. “Since I was a kid, I’ve dreamt of playing abroad. I think the English league would go well with my style,” he told SportBild, pouring further fuel on the fire.

Interestingly, Max has already had a taste of life at a big club after spending three years with Bayern Munich between 2007 and 2010. But he left without making a senior appearance, working his way back to the Bundesliga via Schalke and Karlsruher.

His form for Augsburg saw him included in Germany's 2016 Olympic squad, scoring once in three outings for Die Mannschaft while winning silver in Rio. Now he is one of the hottest prospects in Germany with his pace and work-rate among his assets. 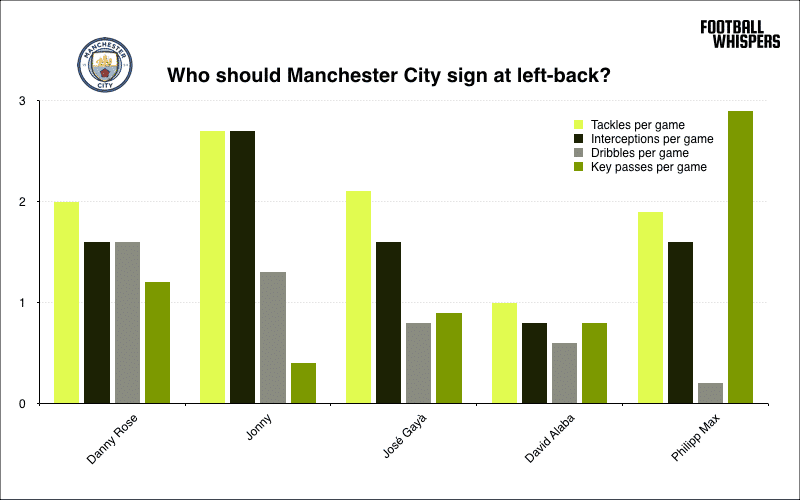 Another – albeit left-field – option would be for Guardiola to put his faith in Ukrainian midfielder Zinchenko.

The 21-year-old, who spent last season on loan at PSV Eindhoven without catching the eye, has been one of the big beneficiaries of the Catalan's faith in youth this season.

Three appearances in the Carabao Cup at left-back suggest Guardiola has no little belief in the former Shakhtar Donetsk prodigy who moved to the Etihad Stadium in 2016 from Russian club Ufa.

Already a full Ukraine international with 13 caps to his name, he was preferred to veteran Yaya Touré for City's game at Huddersfield Town in November – an indicator of how highly Guardiola rates him.

“I decided to bring Zinchenko into the squad because he's training amazing,” the Catalan said after a last-minute win over the Terriers.