The pattern for England at recent major tournaments is well established. Initial ambivalence gradually gives way to increasing – and often unrealistic – levels of expectation before heartbreak, inevitably, follows for fans of the Three Lions.

And, on the eve of this summer's World Cup in Russia, we're on course to follow that well-worn road map once more with Gareth Southgate's young side going from complete outsiders to nailed-on finalists – according to some, anyway – since the domestic season ended.

Disappointment, then, is a natural bedfellow for a nation which has not reached the semi-finals in 28 years since that iconic night at Italia 90; Gazza's tears, Lineker's wisdom and defeat on penalties to the old enemy.

But what have been the biggest heartbreak moments for England fans? We've delved deep into parts of our memories we swore we'd never revisit and remembered five of the worst.

Champions of the world four years earlier on home turf, Alf Ramsey's side went to Mexico tipped for another shot at glory. So much so that some were of the opinion the side was stronger than the side which had beaten West Germany at Wembley to clinch the Jules Rimet Trophy in 1966.

Having progressed through a group comprised of Brazil, Romania and Czechoslovakia with two wins and a defeat, 1-0 to the Seleção despite that Gordon Banks save from Pelé, England met their nemeses of four years prior in the quarters.

With Banks ruled out late on with a stomach issue, in came Peter ‘The Cat' Bonnetti. A fine keeper in his own right, the Chelsea stopper was unfortunate to be playing in a time of English goalkeeping excellence. But he finished the game the scapegoat.

In the scorching midday un at the Estadio León, England raced into a two-goal lead with strikes either side of half-time from Allan Mullery and Martin Peters.

Thinking the job was done, Ramsey withdrew Bobby Charlton. That was the motivation the Germans needed and Uwe Seeler scored twice to force extra-time – with Bonetti culpable on at least one – before Gerd Müller won it with a volley from point-blank range.

The Three Lions do a nice line in new and inventive ways to get knocked out of major tournaments but as exits go, conceding the ‘Goal of the Century' and being on the receiving end of the greatest injustice in World Cup history, all in 90 minutes, is some going.

Unconvincing in the group stages, advancing with three points from as many games, Bobby Robson's side breezed past Paraguay 3-0 to set up a quarter-final tie with Argentina at the Estadio Azteca in Mexico City.

Tensions were already heightened on the field by an ill-tempered quarter-final tie in 1966 while the Falklands War, which had ended just four years prior to the game, lit the blue touch-paper.

But that was nothing compared to what was about to unfold.

Six minutes into the second half Maradona made his first decisive intervention, leaping to reach Steve Hodge's attempted clearance ahead of England keeper Peter Shilton, punching the ball over the Three Lions custodian despite standing 20cm shorter. Tunisian referee Ali Bin Nasser saw nothing wrong with the strike despite furious England protestations.

Four minutes after one of the most scandalous moments in World Cup history, Maradona produced a moment – or, more precisely, several – of sheer genius. Lasting 60 yards and ten seconds, he beat Peter Beardsley, Peter Reid, Terry Butcher (twice) and Terry Fenwick with an impudent dribble before dumping Shilton on his rear and tucking into the empty net.

Lineker scored a late consolation but it was not even that. England had been undone by the two sides of Diego Armando Maradona. And how.

Four years on from that unforgettable quarter-final tie in Mexico City, the relationship between England and their supporters was at an all-time low. Disappointment at the 1988 European Championships was followed by Prime Minister Margaret Thatcher – in response to hooliganism problems – threatening to withdraw from the World Cup in Italy.

Yet, in the space of one glorious summer, the football landscape in the UK was about to change.

Robson, who had previously offered to resign prior to Mexico 86, had agreed to join PSV Eindhoven after the tournament following the FA's decision not to renew his contract. A lacklustre showing in the group stages, not least 1-1 draw with the Republic of Ireland, did little to lift the gloom yet England advanced as group winners.

David Platt's iconic swivelling volley got England past Belgium in the last-16 before a Lineker double against the swinging hips of Roger Milla and Cameroon suddenly put the Three Lions, against all odds, into the last four.

Now the nation was behind England. Now the expectations were raised. At Juventus‘ Stadio Delle Alpi in Turin Andreas Breheme saw his shot deflect in off Paul Parker to give West Germany a 60th-minute lead.

But, ten minutes from time, Lineker, England's hero, drew Robson's men level. Extra time could not separate the two sides yet it provided the match's most iconic moment as Paul Gascoigne, who had lit up the tournament with his impish displays, was awarded a booking which would rule him out of the final.

England, though, were not destined to make it that far and were beaten 4-3 from the penalty spot with Stuart Pearce – a usually accomplished penalty taker – and Chris Waddle missing from 12 yards. 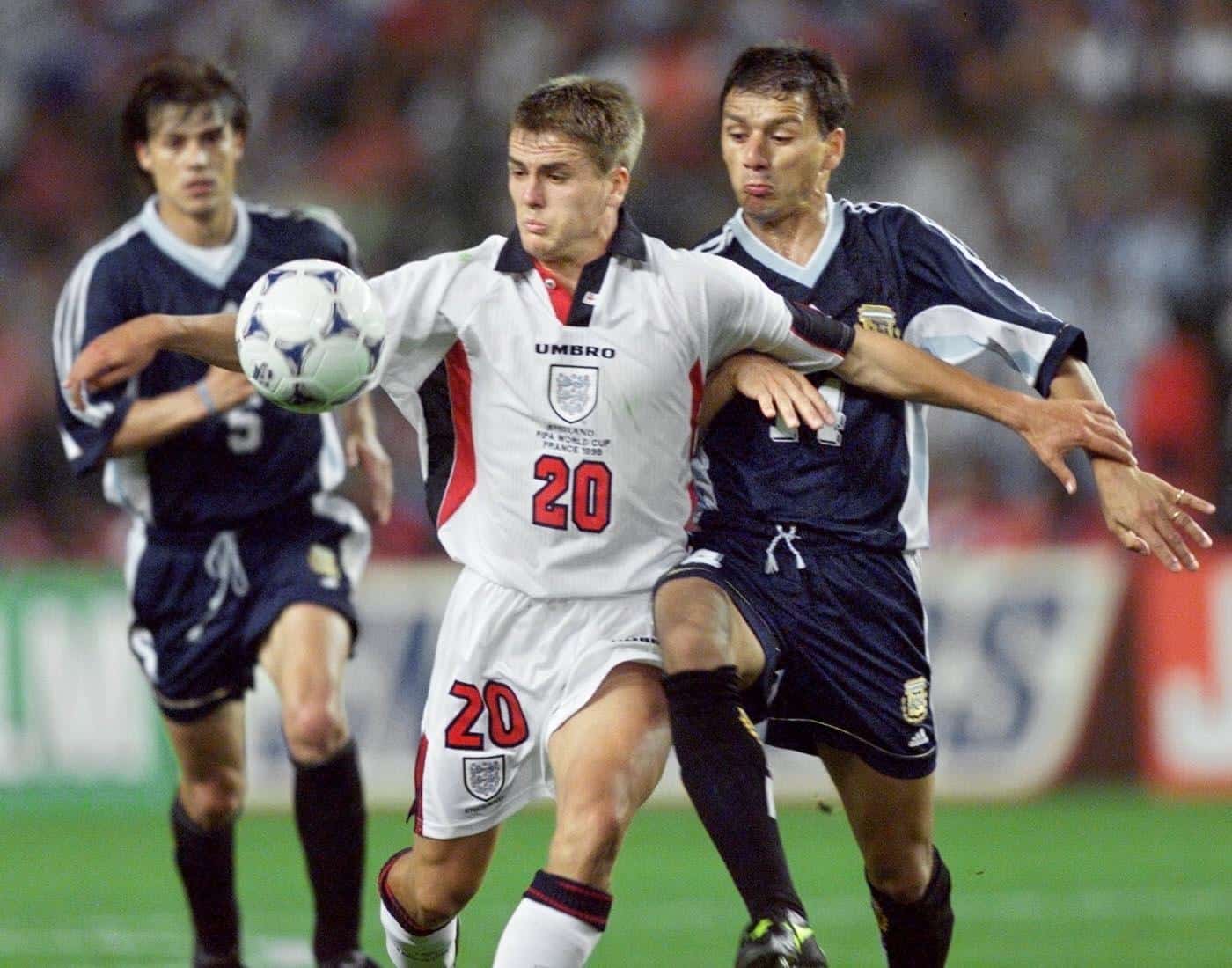 By now England were well versed in dramatic World Cup exits. But this time it was going to be different. For starters, Glenn Hoddle's side boasted the most exciting teenage talent at the tournament in Michael Owen.

And the Liverpool striker's timing could not have been better, piercing the Argentine defence with a slaloming run which saw him kill David Beckham's fizzed pass, out-muscle José Antonio Chamot, skip past Roberto Ayala and lash beyond keeper Carlos Roa to restore England's lead in St Étienne.

So far so good. Then, in classic England fashion, things started to go wrong. First Javier Zanetti levelled in first-half stoppage time. Not ideal, but not a disaster.

What was a disaster, however, was the red card issued to Beckham by Danish referee Kim Milton Nielsen for his moment of petulance, lashing out at future Atlético Madrid boss Diego Simeone less than two minutes into the second half. The Argentine midfielder made a meal of it but Beckham had no defence.

From there England's remaining brave lions held out to force penalties. But not before Sol Campbell had been denied a late winner in extra-time with Alan Shearer deemed to be impeding Argentine stopper Roa.

So to penalties, as in 1990 and 1996 when England were denied a place in the final of the European Championships on home soil by the Germans. The outcome was the same, England's conquerors just wearing different colours as Paul Ince and David Batty failed to convert. 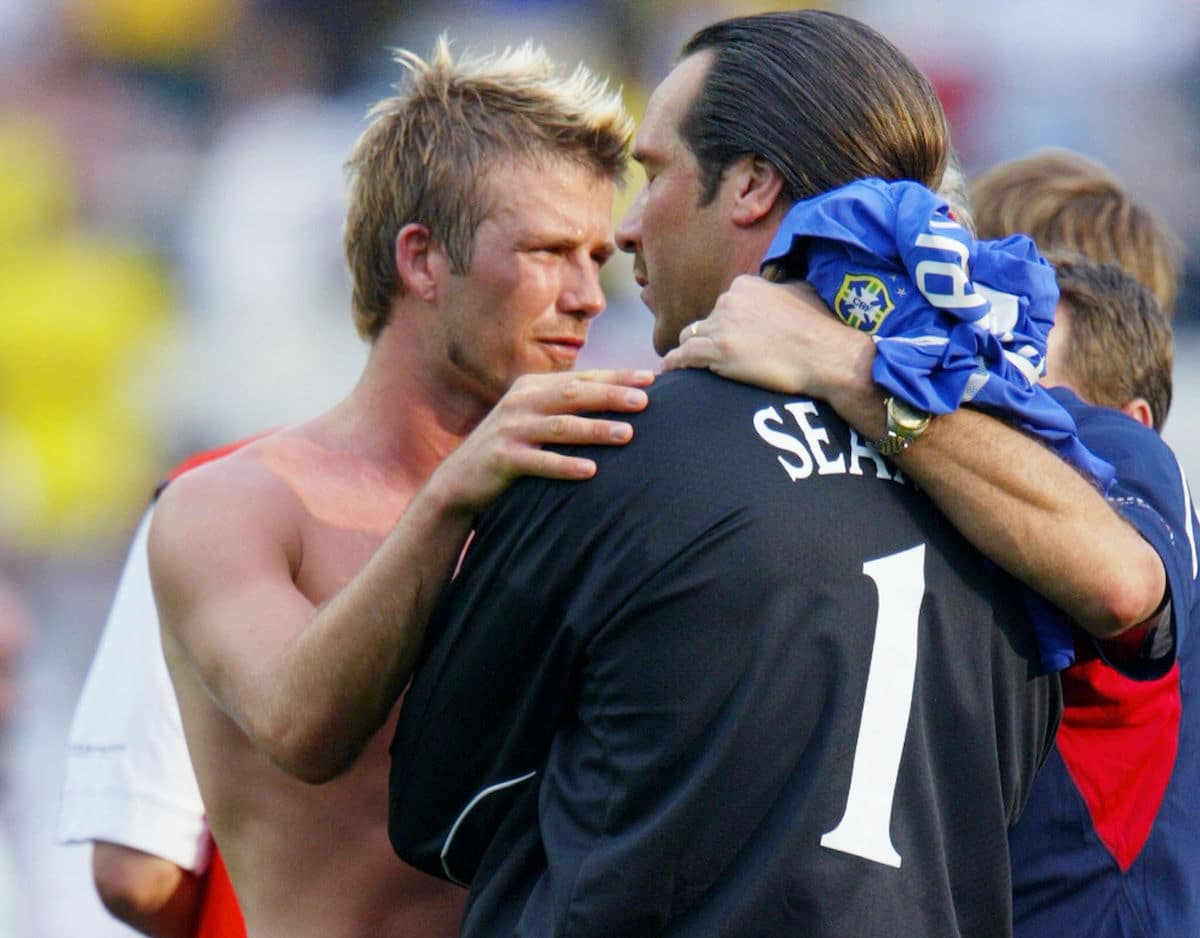 A new direction for England under a fancy continental type in Sven-Göran Eriksson, it had still taken that moment of magic from Beckham against Greece to carry the side as far as South Korea and Japan, co-hosts for the 2002 edition.

With Argentina avenged thanks to Beckham's penalty in the group stages, England breezed past Denmark 3-0 in the last-16 to set up a tantalising quarter-final tie against heavy favourites Brazil.

The nation ground to a halt with the game kicking off at breakfast and it was all going to plan after 23 minutes; Michael Owen pounced on Lucio's costly slip and applied the finishing touch from close range to beat Seleção keeper Marcos.

But in first-half stoppage time Rivaldo turned the game on its head, poking past England stopper David Seaman – more on him later – to bring the South American giants level at a crucial point in the tie.

Five minutes into the second half Brazil completed the turnaround when Ronaldinho – still on his ascent to superstardom – lofted a free-kick over the Arsenal stopper from fully 40 yards, leaving the normally cool custodian red-faced and England, once more, wondering what might have been.