For a club as well resourced as they are, it's incredible how quickly Manchester City plunge into crisis when a player gets injured.

In their first title-winning season under Pep Guardiola the Citizens were ‘forced' to go out and spend a club-record £57million on Aymeric Laporte following injuries to Vincent Kompany – quelle surprise – and John Stones.

Two years later, they will do so again after Laporte damaged his cartilage and lateral meniscus in a challenge with Brighton & Hove Albion defender Adam Webster in last weekend's 4-0 win.

Laporte has undergone successful surgery but the Citizens have not put a timeframe on the 25-year-old's recovery.

The loss of Laporte is a significant blow for Pep Guardiola's side. The defender has quickly established himself as one of the Premier League's finest; if not on a par with Liverpool‘s Virgil van Dijk then very close to the Dutchman.

“It was a mistake when I said he is one of the best – for me, he is the best left-sided central defender in Europe,” Guardiola said of Laporte following his return to the French set-up, just two days before being struck down with injury.

Now, according to the Daily Mail, City will seek to sign another central defender when the January transfer window opens as Stones and Nicolás Otamendi are their only recognised centre-halves. 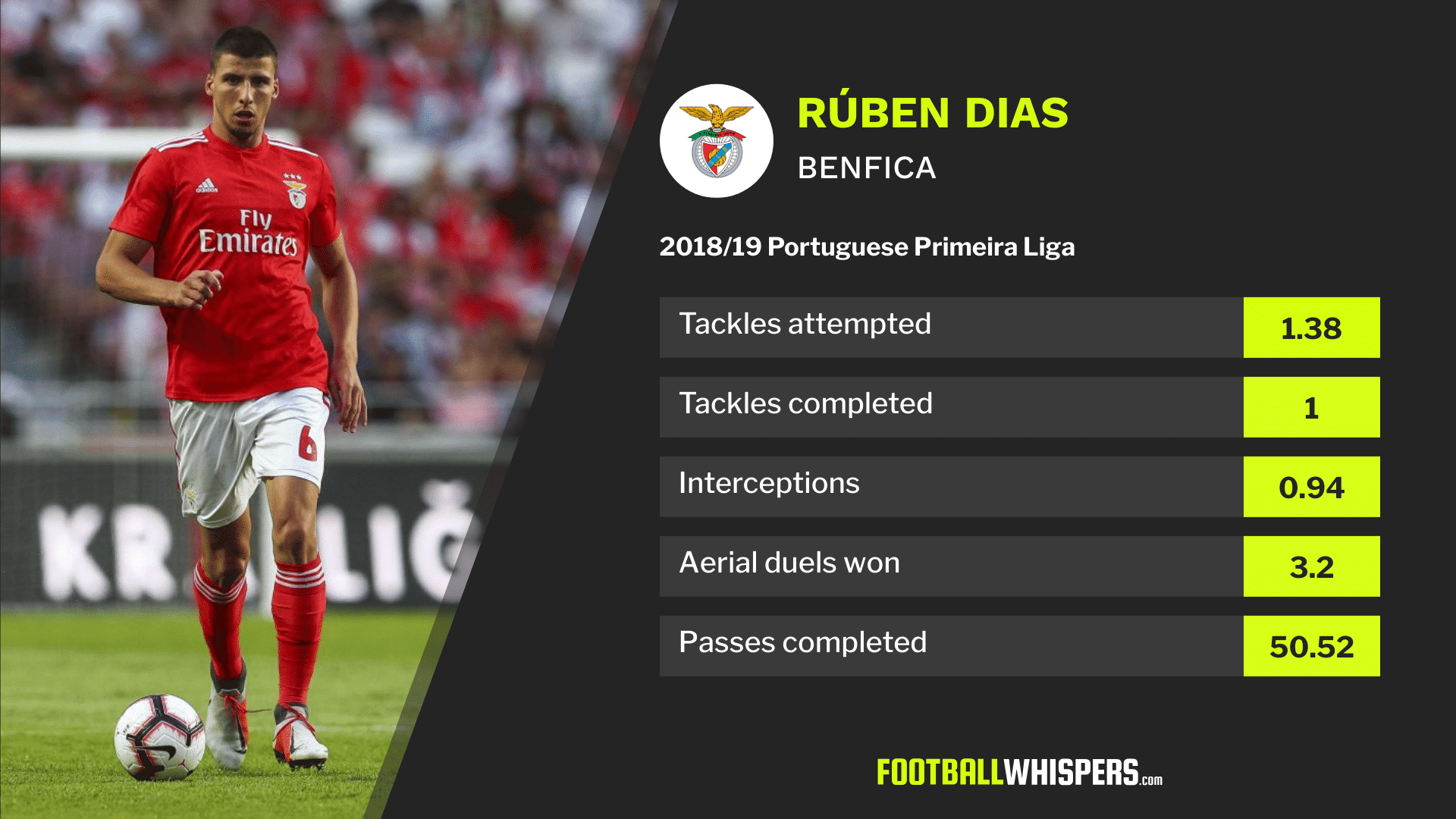 If City are going to use Laporte's misfortune to find a new long-term central defender then they need look no further than Benfica prodigy Días. The 22-year-old was one of the stars of last season for A Águias and is tipped to become one of Europe's best in his position.

Días made his professional debut in 2015 and has not looked back, clocking up almost 100 first-team appearances for Benfica since, as well as 11 caps for Portugal.

It's hard to read too much into Días' defensive numbers given the relative strength of the Portuguese top-flight in comparison to the Premier League but he averaged 50.52 passes per 90 last season which saw him ranked 11th among central defenders in Liga NOS. Almost half (23.82) of those went forward, too.

The only trouble is interest in Días won't be limited to Manchester City. The Portuguese was linked with Manchester United, among others, over the summer and there's bound to be a bidding war which will drive his price up. But he is worth it. 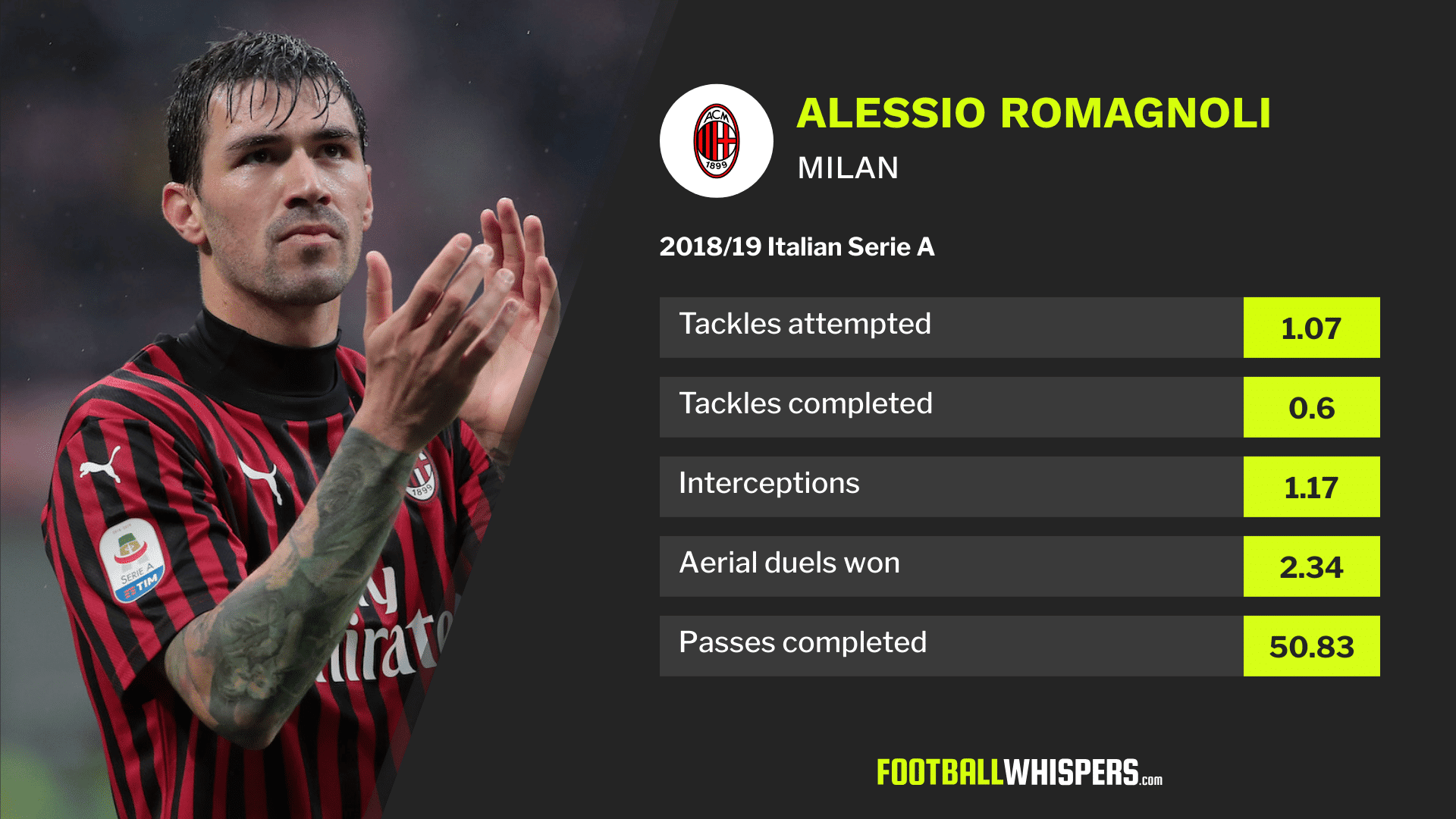 A deal for the Milan captain could be the hardest to get done in January. Even with their financial constraints, the Rossoneri are unlikely to want to part with their totemic central defender and skipper midway through the season.

However, if City can piece together a tempting financial package – and potentially throw in a peripheral squad member such as Benjamin Mendy – Milan might allow the 24-year-old Italian international leave San Siro.

Comfortable on the ball, completing 50.84 passes per 90, there is still room for improvement in Romagnoli's distribution. His average of 16.55 forward passes per 90 was good enough to rank only 128th among central defenders in Serie A last term. However, an overall accuracy of 91.8 per cent was impressive.

Best of all, he'd fit straight into the hole in City's defence as a tall, elegant, left-footer. Blessed with an impressive sense of timing and reading of the game, Romagnoli could be the most natural replacement for Laporte. 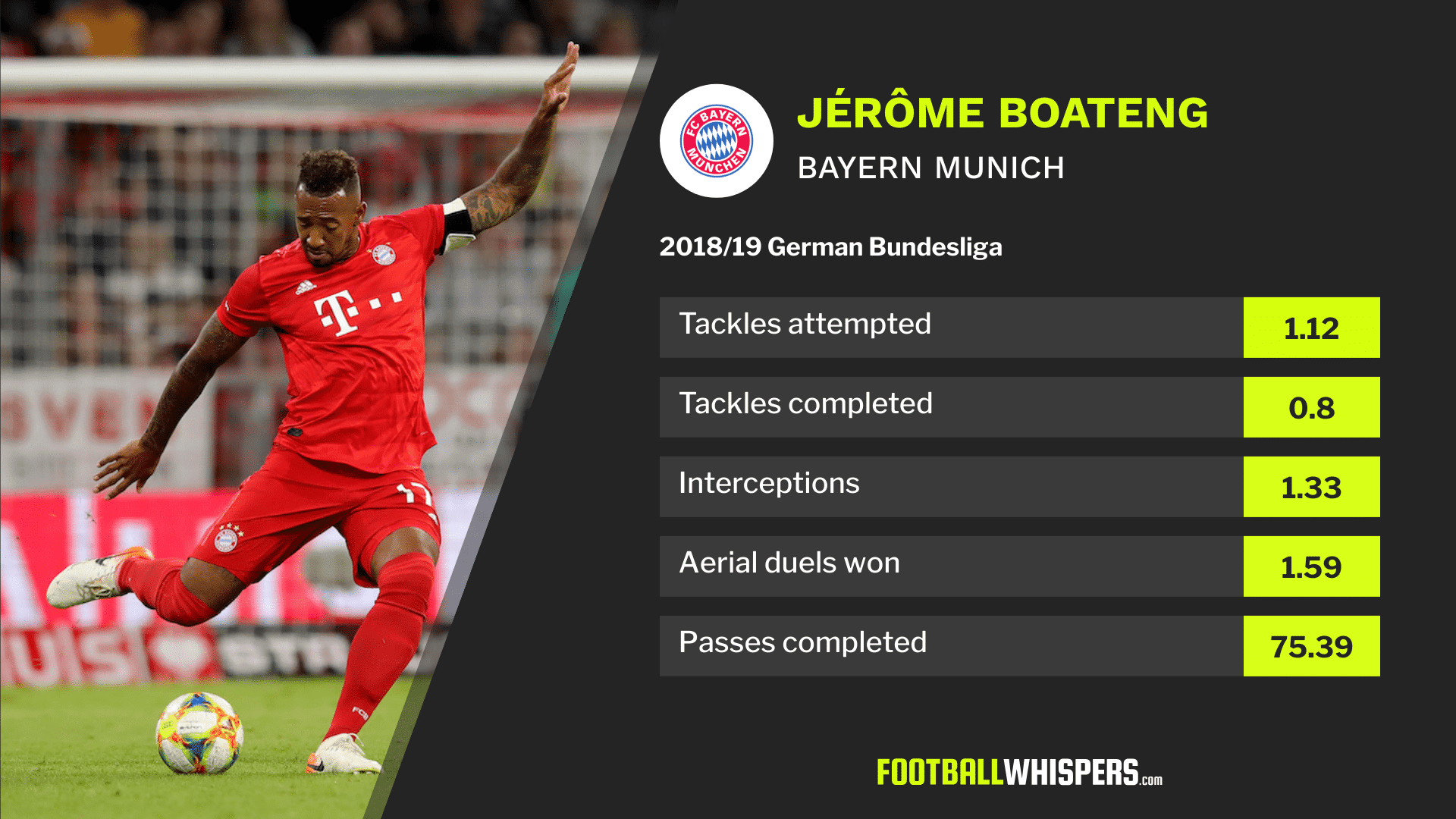 The Bayern Munich defender is the most available on this list. Die Bayern were happy to let Boateng leave Bavaria this summer after splashing out on Benjamin Pavard and Lucas Hernández.

The hope is the French duo will be Bayern's long-term central defensive pairing and, after allowing Mats Hummels to rejoin Borussia Dortmund, Boateng is free to leave too.

What counts against the World Cup-winner is his fitness. Boateng has not managed more than 19 Bundesliga starts in each of the last four seasons and, having just turned 31, he is not an option for the long-term.

Boateng has worked for Guardiola before and, despite missing large chunks of last season, still averaged the fourth-most passes per 90 by a Bundesliga centre-back with 75.39.

Boateng also knows Manchester City – he made 24 appearances for the club during the 2010/11 campaign. 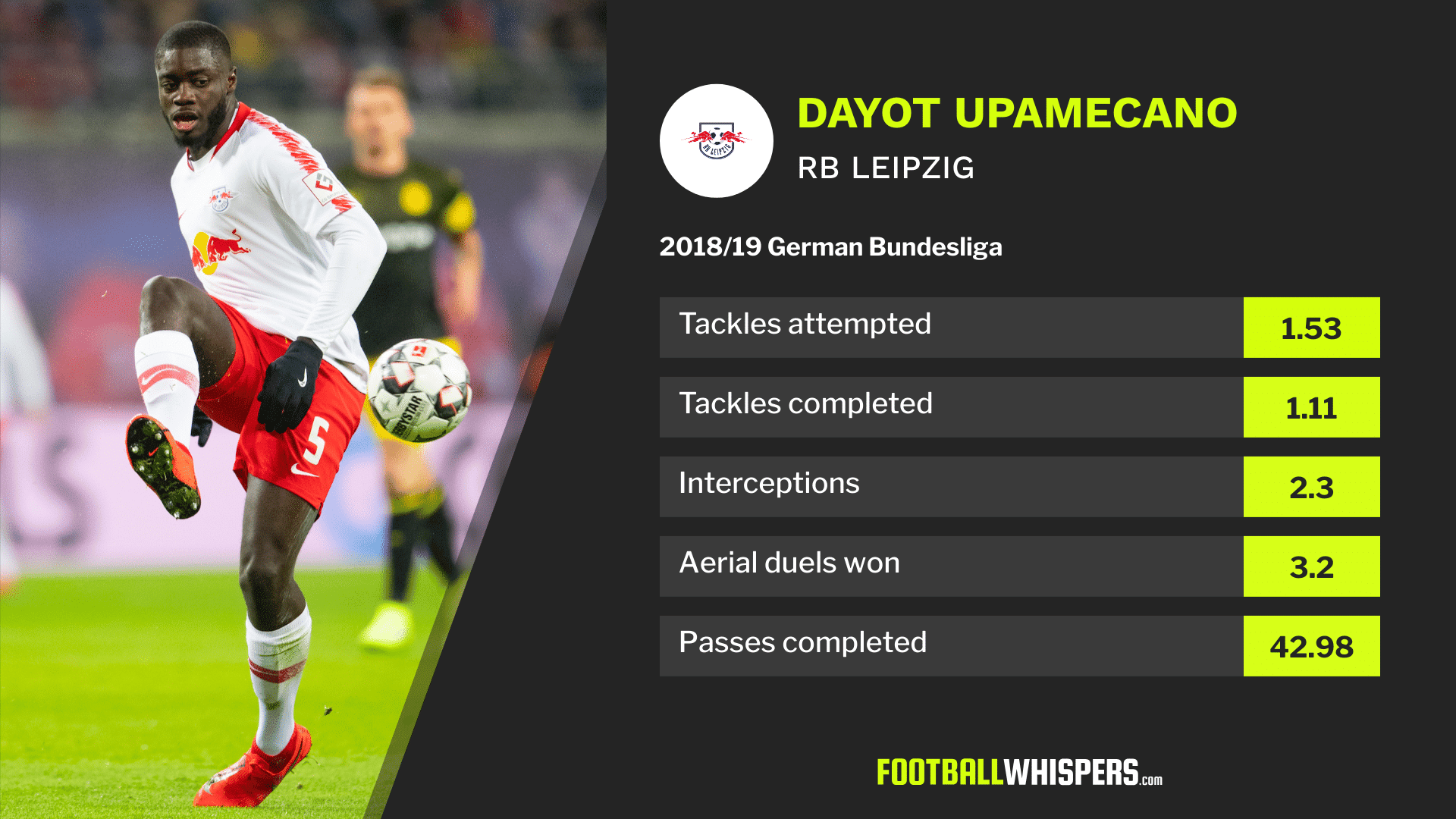 The youngest member of our shortlist, the 20-year-old is one of the most highly sought-after centre-backs in Europe with current employers RB Leipzig reportedly turning down a speculative offer from Arsenal during the summer transfer window.

Despite his billing, the gigantic defender might not be an automatic pick at RBL this season following a knee injury which wrecked the second half of the 2018/19 campaign for the French Under-21 international.

Conversely, that injured opened the door for Nordi Mukiele, Willi Orban and Ibrahima Konaté to form a defensive trio which has begun the start of the new Bundesliga campaign with three wins from three to sit atop the standings at this early stage.

Tall, strong and comfortable bringing the ball out of defence, Upamecano ranked 13th among Bundesliga centre-backs for interceptions per 90 last term with 2.30 – not bad given he made just 15 league appearances. 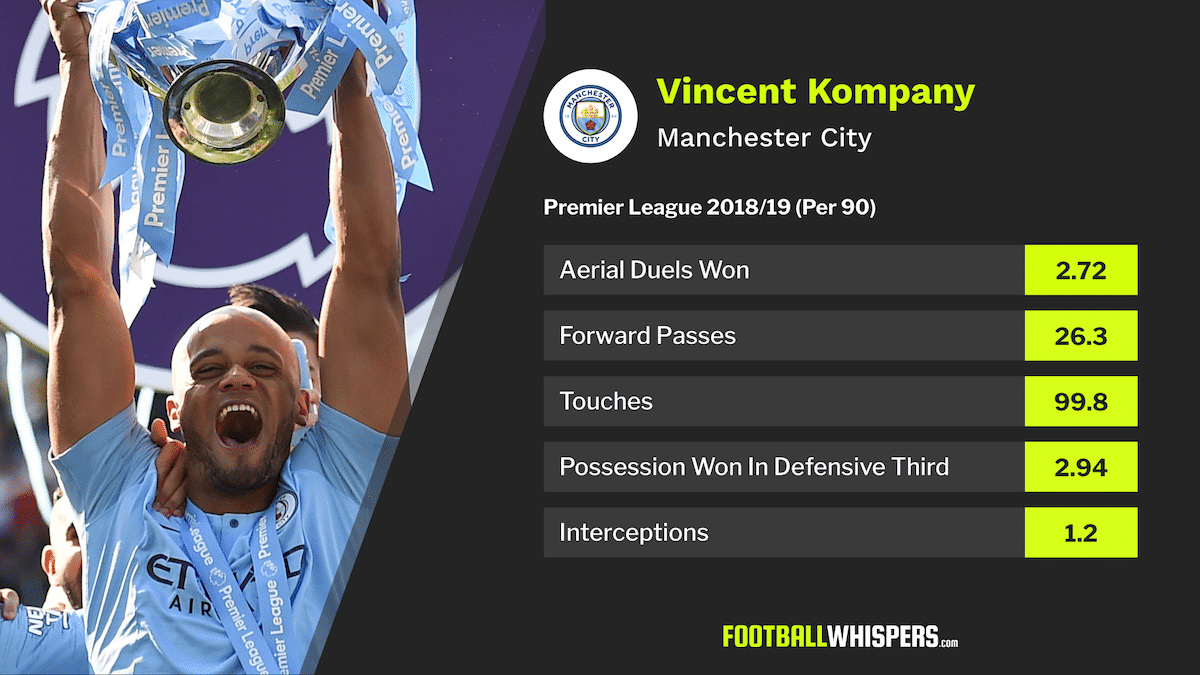 Could one of City's favourite sons of the Abu Dhabi era make a romantic return to the Etihad Stadium? The Belgian appears fully committed to his role as player-coach of Anderlecht but if things do not improve at RSC, where he's overseen just one win in their first six.

But the chance of a final swansong could prove too much to turn down if things go south at Anderlecht.

Kompany would take little to no persuading – assuming he had cut ties with Anderlecht – and would be fully prepared for the demands of working under Guardiola and take no time to assimilate fully.

In the negatives column? Oh yes, the injuries…