Even with the impending capture of St. Etienne defender William Saliba, Arsenal's summer of discontent shows no sign of abating.

The Gunners have been rebuffed, even embarrassed, in their attempts to sign Wilfried Zaha from Crystal Palace. Meanwhile, Kieran Tierney remains firmly at Celtic. And they're no nearer bringing in a centre-back for the here and now.

Saliba, at 18, is one for the future regardless of his £30million price-tag. That much was confirmed when it became apparent the teenager would remain on loan with the Ligue 1 club next season in order to continue his development.

The trouble for Emery and the Gunners' recruitment staff is their prohibitive £45million transfer budget. Failure to win the Europa League final, therefore missing out on qualification for the Champions League, has cost them.

Borussia Dortmund‘s Dan-Axel Zagadou is reportedly an Arsenal transfer target. But at £27million the Frenchman would eat up more than half of the cash available to the North Londoners this summer. Sampdoria defender Joachim Andersen was another defensive option but the Dane looks set to join Lyon. 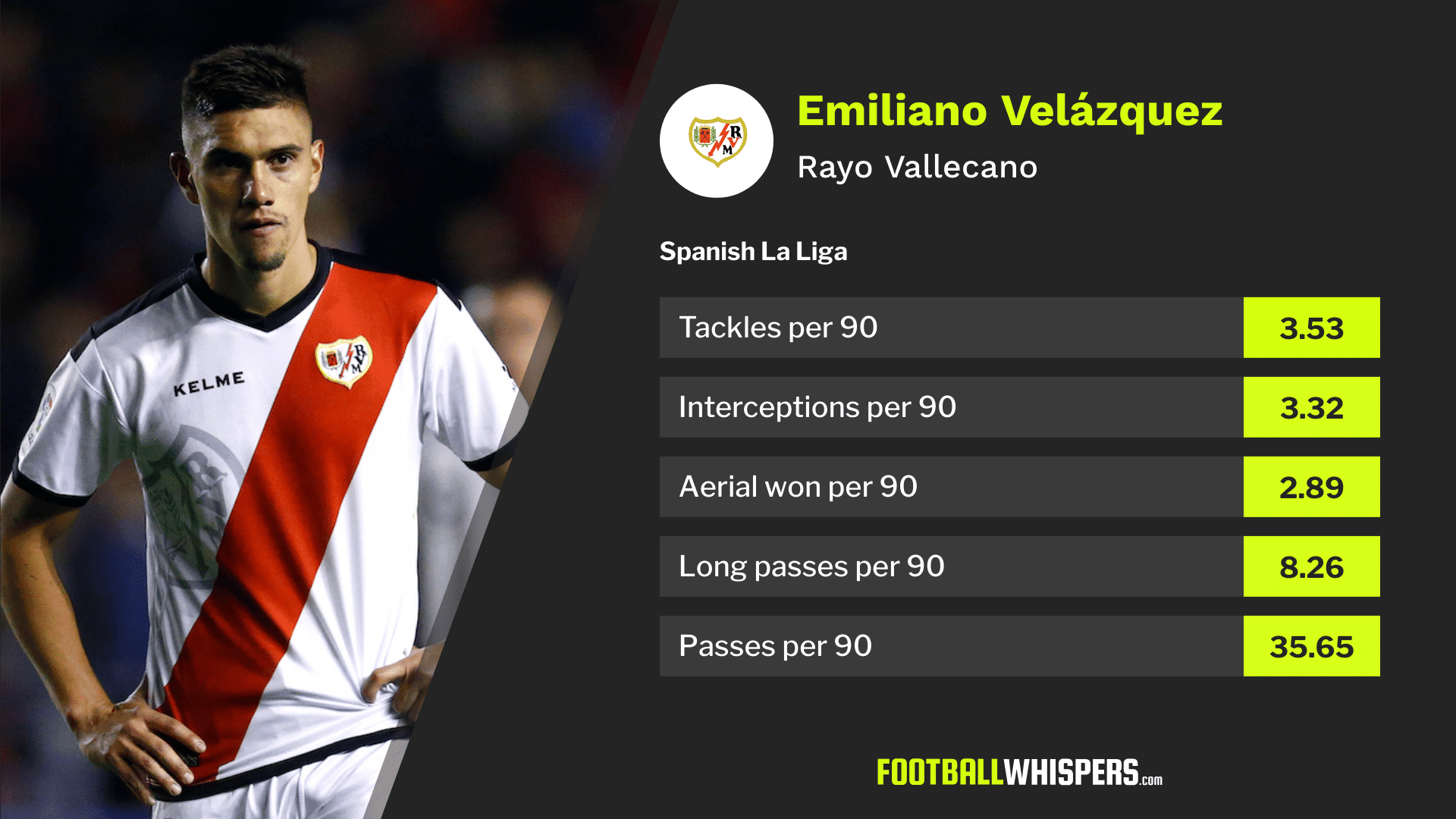 Atlético Madrid have a thing for Uruguayan centre-backs. While Diego Godín left for Internazionale this summer, José Giménez remains at the Wanda Metropolitano. There was previously another, Velázquez.

The 25-year-old Montevideo native left Atleti in 2018 to join Rayo Vallecano having previously turned out for Los Franjirrojos on loan during the 2017/18 campaign, making 25 appearances and scoring twice as they won promotion from the Segunda Division.

Last season Velázquez and Rayo made the step up to LaLiga, appearing 18 times for the Madrid-based side. His statistics make for impressive reading. No LaLiga centre-back averaged more interceptions (3.31 per 90) while he was second for tackles (2.32).

One area he will have to work on is his distribution. Attempting just 35.64 passes per 90, a completion rate of 69.5 per cent was underwhelming and Arsenal defenders are expected to play out from the back. 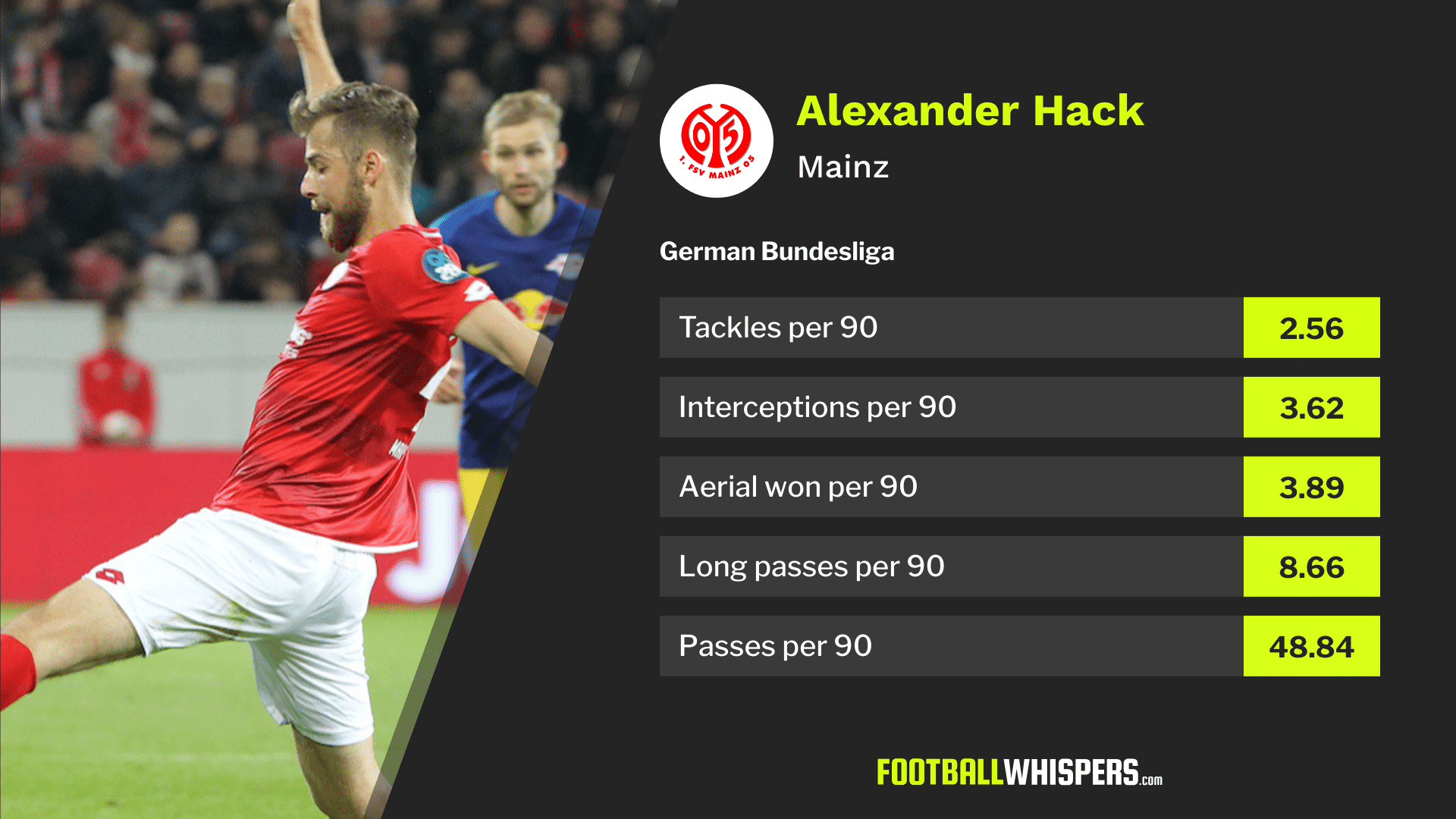 The 2018/19 campaign was a breakout year for Mainz's 6ft 4in centre-back who made 14 Bundesliga starts for Die Nullfünfer after graduating from the second string at last.

There's no getting away from the fact the 25-year-old would be a huge gamble, but Arsenal are going to have to compromise if they are to maximise their reported £45million transfer budget and first impressions of Hack have been good.

With 3.62 interceptions per 90 last term, no centre-back in Germany's top-flight managed more. Unsurprisingly, given his uncompromising frame, the former Germany Under-20 cap won 3.88 aerial duels per 90 – putting him seventh in the league among his defensive peers.

But what the left-sided centre-back did show was the raw attributes needed to excel. A good reader of the game who times his challenges well, Hack made 25.08 forward passes per 90 last season, the 12th-most in the Bundesliga. 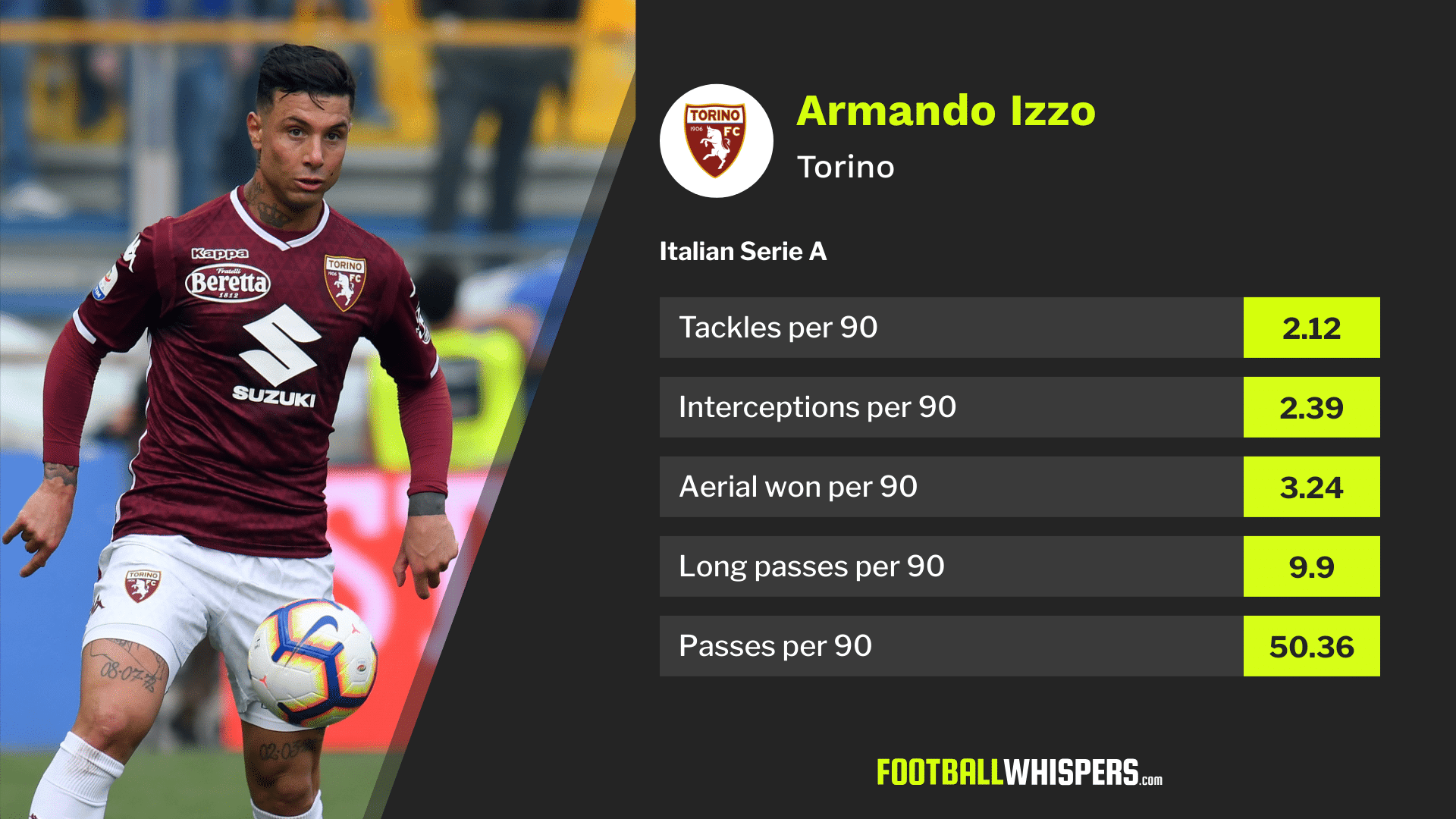 Manchester United, Roma and Everton are among those believed to be interested in the Torino defender, dubbed ‘the new Cannavaro' due to the fact he is on the small side for a centre-back at 6ft. Not that his stature has held Izzo back on his route to the top.

Now a full Italy international, Izzo began his career in Lega Pro, working his way through Serie B – and a six-month suspension for alleged match-fixing – to reach Serie A with Genoa.

Last season in Serie A he was fourth for interceptions (2.39 per 90) among central defenders and fifth for aerial duels won (3.24) in 3,274 minutes for the Turin-based side.

At 27 the former Genoa stopper is not a long-term solution but he is someone who can plug a sizeable hole for Arsenal immediately.

Comfortable stepping into midfield to win the ball and a bold user of the ball, averaging 22.48 forward passes per 90, Izzo would probably be at the top end of Arsenal's budget for the position. 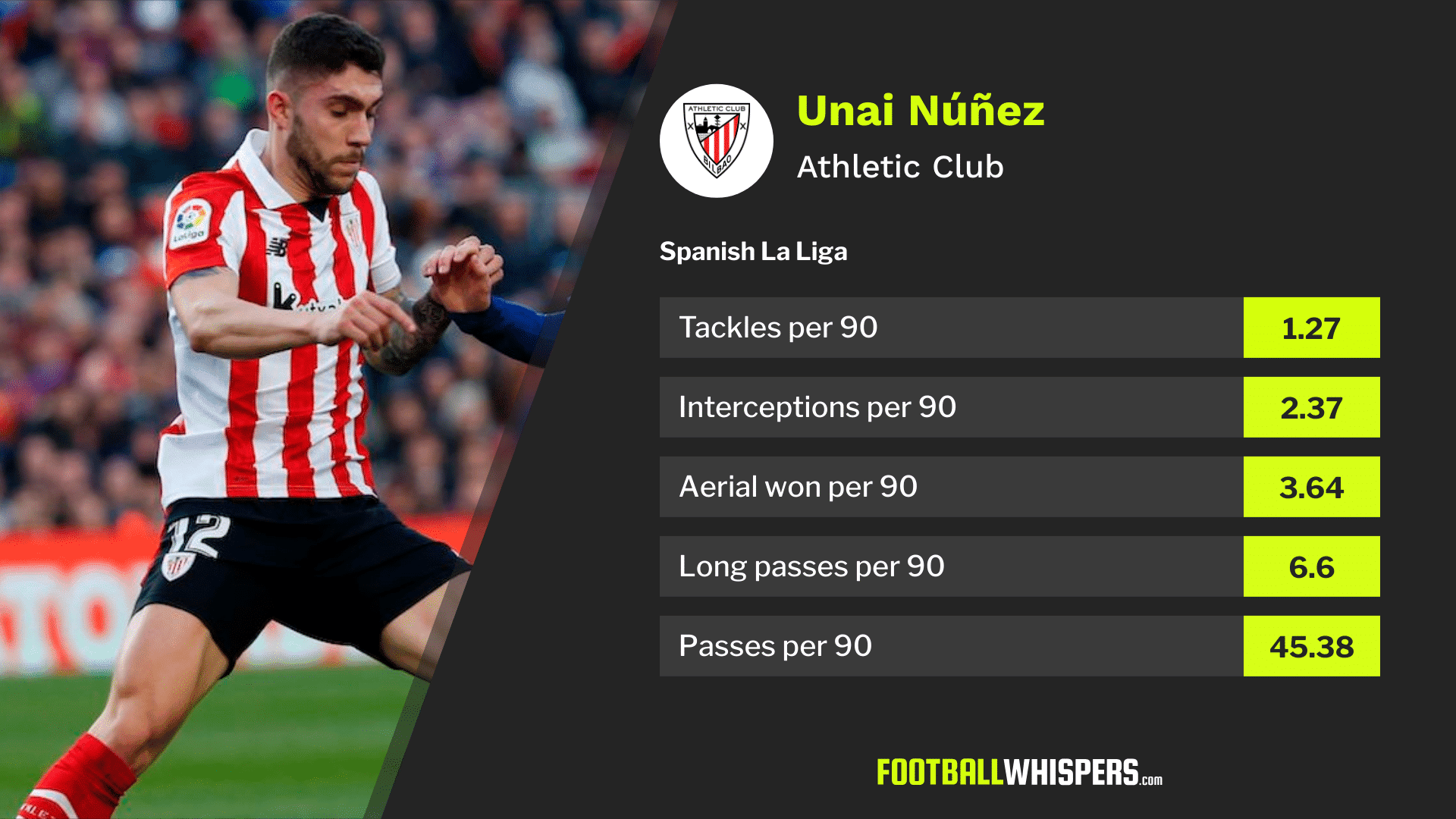 The 22-year-old Basque looks like a signing from a bygone Arsenal era. Comfortable stepping out of defence to play, Núñez is not afraid to spray the ball around and completed an impressive 87.3 per cent of all the passes he attempted last season.

Part of Spain's Under-21 European Championship-winning side this summer, Núñez played three times as La Rojita triumphed in Italy. It was a silver lining to a somewhat disappointing campaign after making just 14 LaLiga appearances for Athletic.

However, despite his relative lack of minutes (1,063), the cultured centre-half impressed. He averaged 2.37 interceptions per 90 and won 3.64 aerial duels despite finding himself behind Inigo Martíñez, Yeray and Peru Nolaskoain in the pecking order for much of the campaign.

A good one-v-one defender with an impressive timing in the tackle, Núñez is not the finished product. But his ceiling is arguably higher than anyone else on this list. 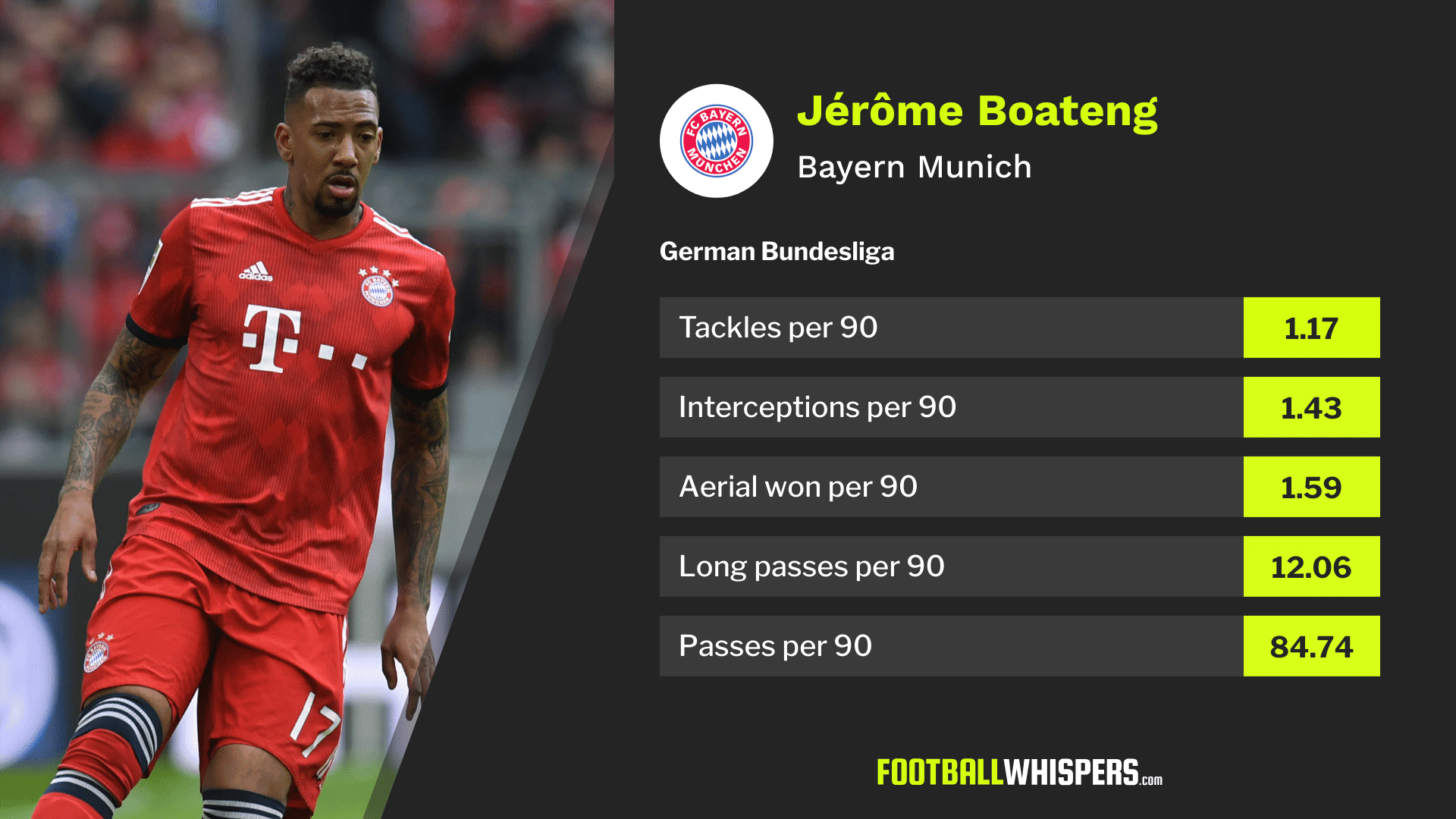 A world champion with Germany in 2014, Boateng's fall from grace has been rapid. The Bayern defender is far from a spent force even though the Bavarians are prepared to let the 30-year-old move on for a vastly reduced fee this summer following the signing of Lucas Hernández.

Hamstring issues hampered Boateng during 2017/18 but he was never out for more than four days last term, making 28 appearances in all competitions, totalling just short of 2,500 minutes for Die Bayern.

Despite exaggerated reports of his demise – and a rather unceremonious dumping by Germany coach Jogi Löw in March of this year – there is little doubt the former Manchester City defender remains a Rolls Royce of a defender on his day.

Athletic and quick across the ground, Boateng would bring a great deal of experience and leadership to the Arsenal dressing room; a presence which would go beyond what he can do with the ball. An accomplished passer, no-one on this shortlist had a higher pass accuracy than his 88.9 per cent last season.