Change is afoot at Barcelona. With Luis Enrique’s time in charge at the Camp Nou very much in its denouement, plans are in place for the next chapter in the club’s illustrious history. Of course, while there is always that natural sense of disquietude at a changing of the guard, the end of Enrique’s trophy-laden stay doesn’t have to be a harbinger of grimmer times ahead.

No, under the tutelage of a new visionary, Barcelona have the chance to make next season one of thrilling adventures and exciting, new beginnings. And while the trusted vanguard of Lionel Messi, Andrés Iniesta and Gerard Piqué are expected to be central to adapting to the post-Lucho era, next season will offer the chance for some of Barça’s fringe players to step up to the mark.

A new head coach will bring with it the possibility of shaking up the established order at Barca, meaning now is as good as ever for the next generation to show why they are just that. Here are five Barcelona players primed for a breakthrough season in the 2017/18 campaign.

For a club of Barcelona’s stature, last summer’s transfer window was satisfying without being spectacular. The club have signed Luis Suárez and Neymar in recent seasons but their most recent batch of new recruits lacked a genuine marquee feel.

André Gomes has shown flickers of true promise without fully establishing, while Paco Alcácer has yet to fully prove why he was considered as an exciting back-up to the Messi-Suarez-Neymar trident.

Yes, while some of Barça’s new boys have made slow starts to their careers in Catalonia, Samuel Umtiti has excelled to the point where he has cemented his place as Enrique’s first-choice centre-half alongside Pique. 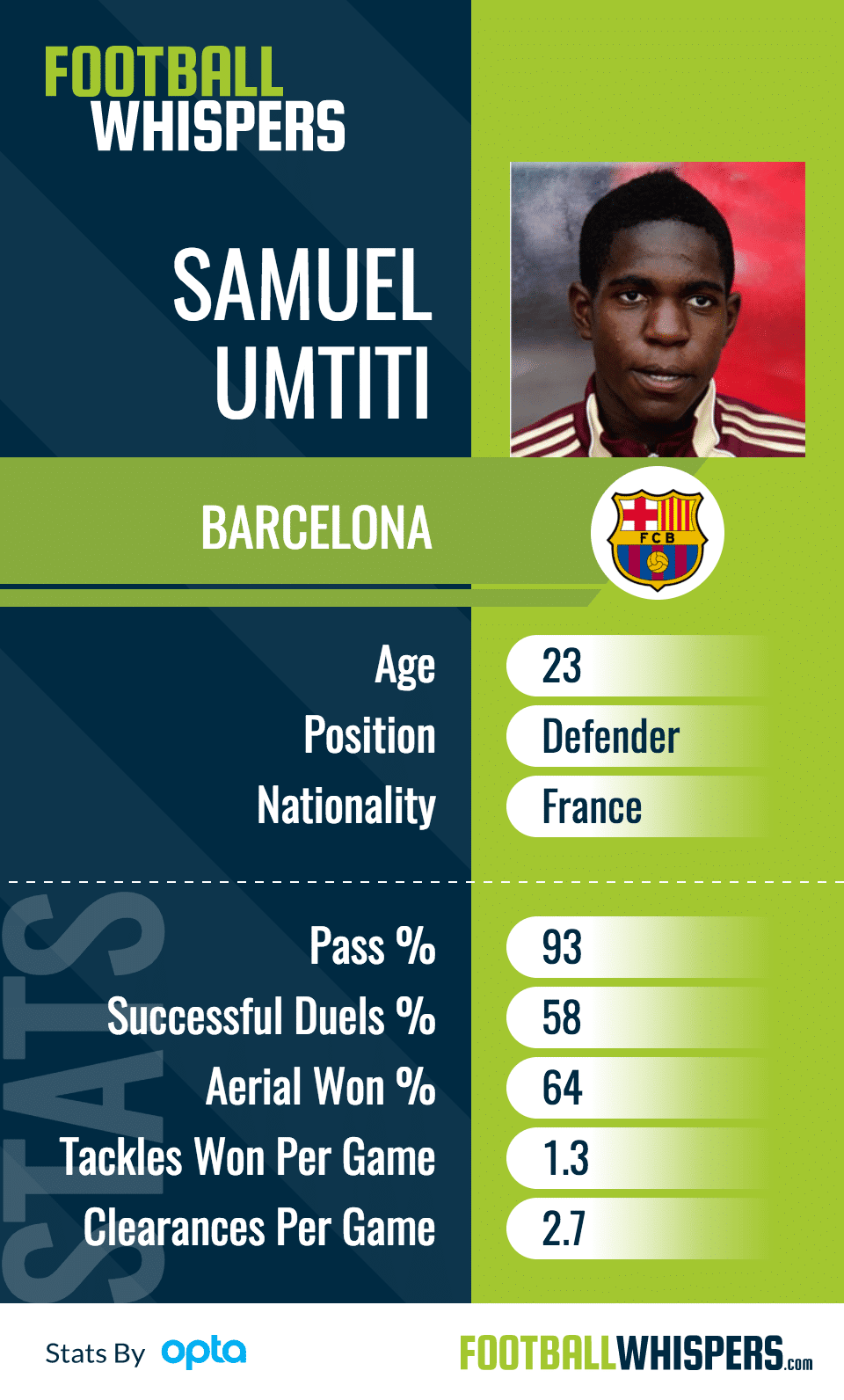 Umtiti, still only 23, has completed 2.7 clearances and 1.8 interceptions per game, while he has proven worthy of playing alongside Barca’s pass masters with a 93% success rate.

Whoever the new manager is, he won’t have to look far for an exceptional centre-half with the potential to become world-class – there’s already one in the team.

He is the Suárez in the Barcelona team who isn’t a household name, but has the potential to be. The former Manchester City midfielder only cost the Catalan giants £3million last summer but Denis Suárez has already shown enough promise to suggest he could be a regular fixture in the starting line-up.

The 23-year-old is a self-confessed Iniesta admirer, admitting to watching the Spain World Cup hero closely in training in order to learn how he performs the role of a midfielder so seamlessly.

Calling Suárez the next Iniesta is a huge stretch, and not one this writer is worth committing to, but he has offered glimpses this season which have illustrated his steady progress in the last twelve months.

Suárez scored twice in Barca’s 5-2 Copa del Rey win over Real Socieded back in January, showing the kind of industry, invention and clinical finishing required to be make it as a regular in the Blaugrana side.

The former Villarreal man has endured an often frustrating path to this point, being refused first-team minutes by Roberto Mancini before excelling in the Barcelona B team during the 2013/14 season without cracking into the senior side. After an impressive loan spell at Sevilla – he was part of the deal that saw Ivan Rakitić join Barca – he was sold to Villarreal, where he impressed.

Now he’s back at Barcelona and there’s a sense of unfinished business. He has had to bide his time but when he’s been given the chance by Enrique this year he has often proven his worth. With a promising season under his belt, the fans have taken to Suárez and there is a belief that he can use this campaign as a launchpad to greater things.

A wonderfully gifted teenager flourishing in the Barcelona B team, Pérez could be one of the first to profit from a manager prepared to nurture the club’s youth talent.

The teenager is blessed with blistering pace and has shown a penchant for the spectacular, which has been enough for a lot of supporters to keep close tabs on him.

While he is raw and has plenty to learn, Pérez is certainly the kind of player who could profit from training regularly with the club’s biggest stars.

The forward caught the eye during this season’s UEFA Youth League, in which he scored three times and picked up two assists. His beautiful goal against Manchester City, drilling home a ferociously-struck left-footed effort, proved that he was capable of producing a moment of magic seemingly out of nowhere.

The emergence of an exciting young talent is often the perfect way to galvanise a club and, with the right direction and coaching, Pérez could be precisely that.

Like Suárez, Sergi Roberto has experienced a career largely defined by various ups-and-downs. He has been with Barcelona since he was 10 and, for a long time, he was considered to be a natural successor to Thiago Alcântara in midfield.

However, Roberto’s creative offerings couldn’t match that of Thiago and, as a result, his place in the team looked uncertain.

He has had Enrique to thank for his regeneration. His manager utilised his evident versatility to convert him to an attacking right-back, where he has thrived.

It was going well until Paris Saint-Germain hammered Barcelona 4-0 in the Champions League last-16. Roberto, isolated too often against an inspired Julian Draxler, endured a torrid time. Having been identified as a weak link, though, Roberto recovered to play a key role in Barça’s historic 6-1 comeback victory over the French side, scoring the last-gasp winner to etch himself into the history books.

Against Real Madrid, Roberto was once again produced a pivotal moment of class. It was his run from right-back in stoppage-time that eventually led to Messi’s dramatic winner. Such meaningful contributions have shown that Roberto is capable of making the right-back slot his own, even if he can’t be another Dani Alves.

Barcelona already have Umtiti as a centre-back with exciting potential, but Marlon Santos’ impressive league debut last week against Las Palmas has suddenly thrown his name into the conversation too.

The 21-year-old was thrust into the heat of battle last-minute when Javier Mascherano sustained an injury in the warm-up. Santos responded to the opportunity with eye-catching composure, comfortably slotting in beside Umtiti for an encouraging league debut.

Thanks to that, Santos is certainly in the reckoning for next season, but he may find himself with even more opportunities if Jérémy Mathieu departs, as is widely expected.

Santos is currently on loan at the Camp Nou from Brazilian side Fluminense but Barcelona are reportedly eager to tie him up in a permanent deal.

He certainly has Iniesta’s seal of approval, which provide a huge confidence boost.

“I want to congratulate Marlon because it is not easy playing for the first team, away from home in those circumstances,” Iniesta told Barcelona’s official website after the Las Palmas win.

“He is training and playing with us because he has what it takes.”

Should Barcelona sign Santos, expect to hear his name a lot more next season.