Chelsea are in search for a new backup goalkeeper after former No.2 Asmir Begović left Stamford Bridge to rejoin Bournemouth this week.

Begovic was set to depart in January but with the Blues unable to find a replacement for him, he stayed until the end of the 2016/17 campaign.

While they may have a player with a lot of international experience in third-choice option Eduardo, Antonio Conte will almost certainly want to bring in a capable understudy to Thibaut Courtois so here we pick out five options he should look at.

The 24-year-old French goalkeeper made 27 appearances in all competitions for PSG but is currently behind Kevin Trapp in the pecking order at the Parc des Princes.

He played 15 times in the league, keeping six clean sheets, making an average of 1.36 saves per goal conceded.

Before the 2016/17 season, he had spent three seasons out on loan – at Lens in Ligue 2, at Bastia in Ligue 1 and at Villarreal in LaLiga.

And it was at the Yellow Submarine where he would have really caught the eye.

With Sergio Asenjo injured, he played a crucial part in Villarreal’s hugely successful 2015/16 season, playing 37 times in total as they reached the semi-finals of the Europa League and came fourth in LaLiga.

He kept 15 clean sheets in 32 league games and made an average of 2.6 saves per goal conceded.

Areola surely won’t want to stay at PSG as a backup, and the real question is whether he would be happy staying as second choice at Chelsea.

He has received call ups to the French national team but is yet to make his International debut, and perhaps staying as a backup won’t help him get anywhere nearer to dislodging Hugo Lloris.

Chelsea bought Begović from Stoke City, so why not go in for the Potters’ No.1 again?

The Mirror are reporting that Jack Butland is a Chelsea, Manchester United, Manchester City and Arsenal transfer target.

After recovering from a serious injury, the 24-year-old made five appearances for Stoke towards the end of the Premier League season just finished.

With four England caps, he’s got experience despite his young age and would be a safe pair of gloves to look to should Courtois not be playing.

And with Lee Grant proving himself for Mark Hughes’ side last season, perhaps they would be more willing to sell.

But he was previously subject of a bid from the Blues, when he was leaving Birmingham City, but turned them down for Stoke instead.

“I’d always backed myself to try and do well but I didn’t want to get bogged down and just be another number.

“I’m not saying I would have been [another number] at Chelsea but I felt the next step for me was at Stoke.”

Whether his mind has changed now and the lure of being part of a squad challenging domestically and Europe could have a sway is yet to be seen. 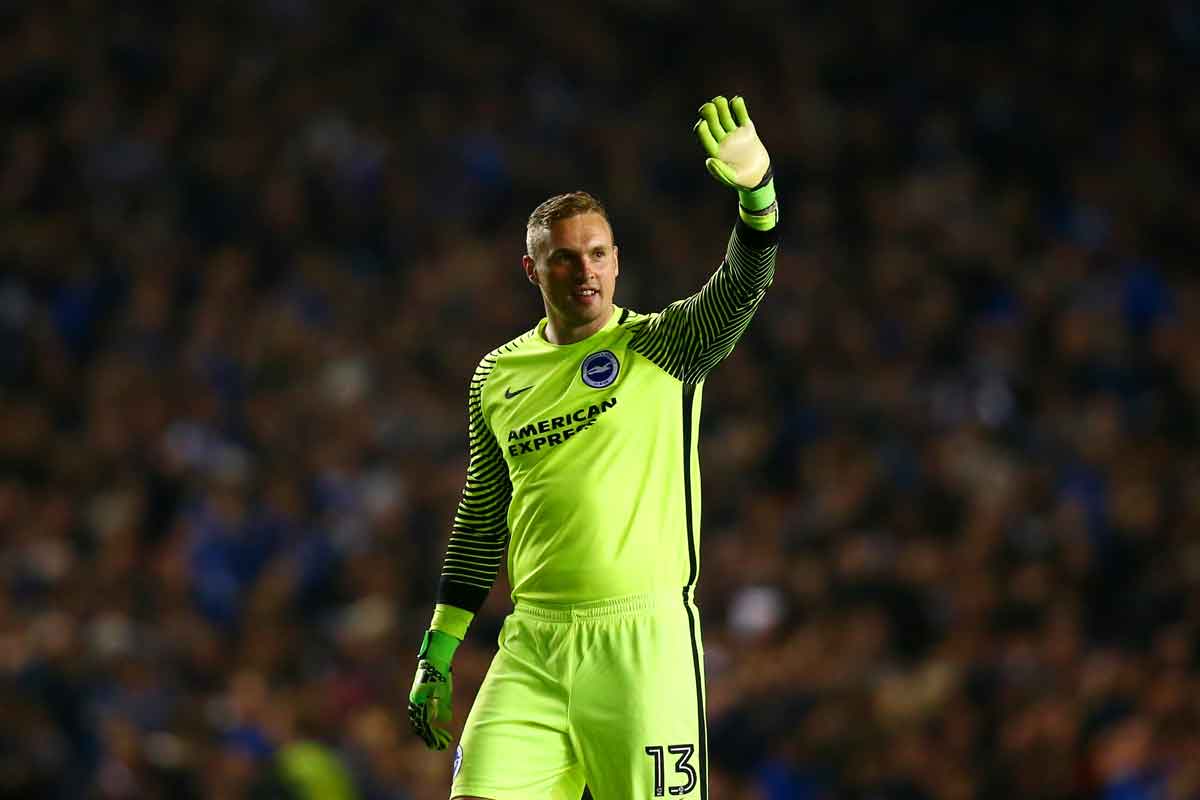 David Stockdale would be a cheap option for Conte and Chelsea.

After being No.1 for Brighton and Hove Albion’s successful promotion push, he looks set to leave the South Coast after rejecting an offer from the Premier League new boys.

The 31-year-old already has experience of living in West London too, making 39 Premier League appearances for Fulham between the 2008/09 and 2013/14 seasons.

According to The Daily Star, he is a Chelsea transfer target, given that they are believed to have asked about him in January when Begović was first looking for a move away from Stamford Bridge.

In Stockdale’s 2016/17 campaign with Brighton, he kept 18 clean sheets in 41 Championship appearances, averaging 2.77 saves per goal.

A move to Stamford Bridge would of course be a big step up for him but it would be hard for him to turn down a move to compete in one of the best teams in Europe, although there is talk of him returning to hometown club Leeds United.

Asenjo hasn’t been linked with Chelsea, but he would be a great option as a No.2.

With Villarreal negotiating with Porto over extending Andrés Fernández’s stay at the Estadio de la Cerámica, perhaps they would consider letting their first-choice goalkeeper go for a decent fee, given most players at the Yellow Submarine have a price.

He was arguably the best goalkeeper in Spain this season before picking up yet another cruciate ligament injury in February.

In fact, Gaizka Mendieta named him in his LaLiga team of the season for Sky Sports after he kept 11 clean sheets in 24 appearances, averaging 3.87 saves per goal conceded.

The 27-year-old has one cap for Spain and if he was from any other country, that would surely be more.

His proneness to picking up injuries would of course be a worry to Chelsea, but his class would surely mean there wouldn’t be many better backup options than Asenjo around should he make the move to Stamford Bridge.

According to The Daily Mail, another option to replace Begović is Fernando Muslera.

Like Stockdale, the Blues were thought to be interested in him in January, but a move failed to materialise.

But like Butland, it’s believed the Galatasaray No.1 has reservations over his first-team opportunities at Stamford Bridge.

The 30-year-old has vast experience to his name though, with more than 350 appearances for Lazio and Galatasaray and nearly 90 caps for Uruguay.

He made 33 Super Lig appearances in 2016/17, keeping nine clean sheets and making 2.1 saves per goal conceded.

His arrival would be similar to that of Sergio Romero at Manchester United or David Ospina at Arsenal – an experienced international goalkeeper who is more than capable of deputising. 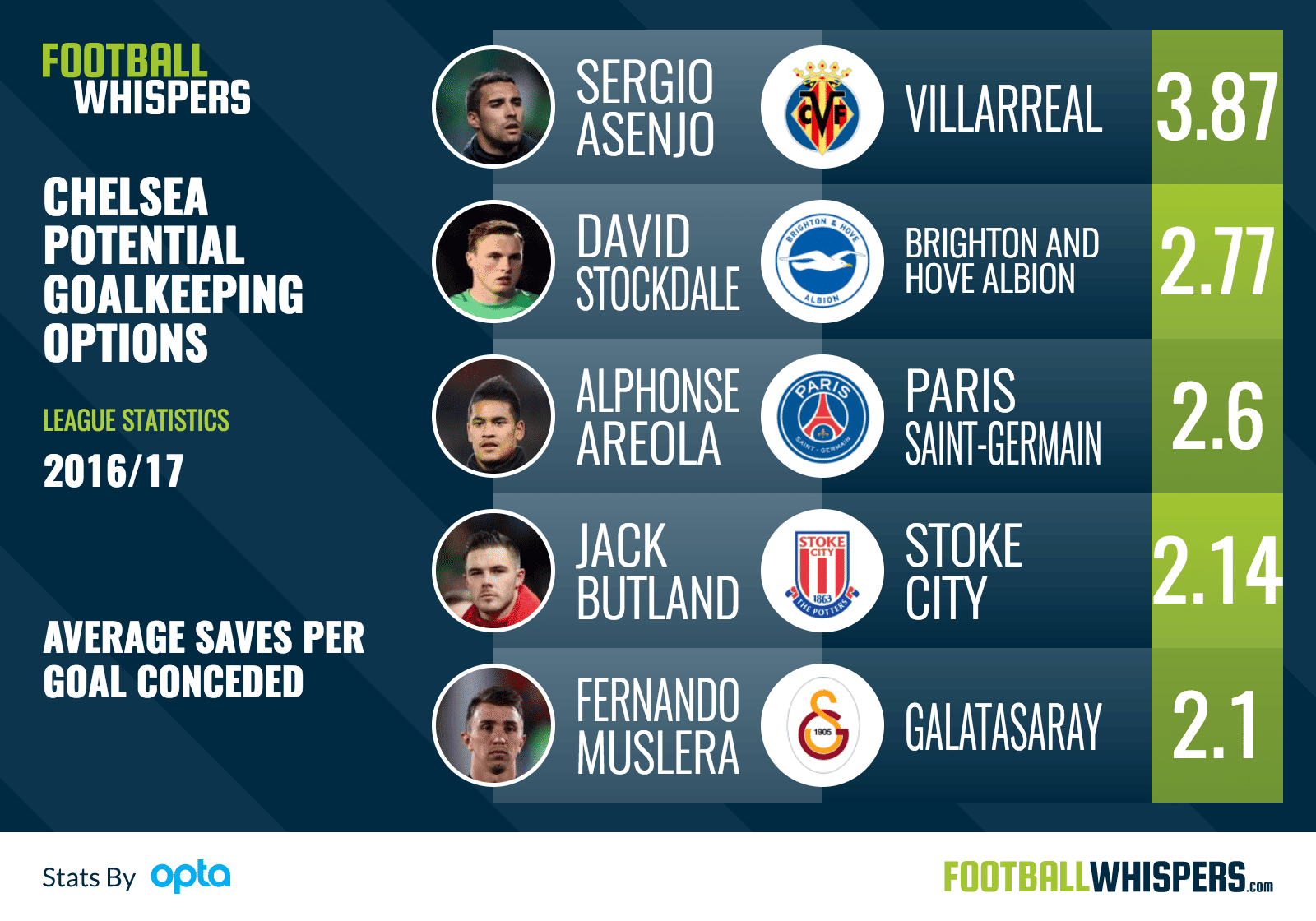