This summer has been far from ideal for Real Madrid star Alvaro Morata.

A deal for Pierre Emerick-Aubameyang also hangs in the balance after Borussia Dortmund’s CEO Hans-Joachim Watzke said the club will only “wait a few more days” for offers to be made.

And, finally, Andrea Belotti has reportedly agreed to join Milan over a potential move to Stamford Bridge.

Chelsea’s inability to sign a top class striker to replace Diego Costa, who is set for a return to Atletico Madrid, has been a cause of severe frustration for Blues boss Antonio Conte, who is believed to be unhappy with the Chelsea’s dealings in the transfer market.

The Italian walked away from Juventus in 2014 after becoming irked with the club’s hierarchy and it’s a scenario the Premier League champion's board can’t afford to let happen this summer.

There’s only so much rejection a man will take, after all. So Chelsea need to bring in a striker quickly. And we’ve picked out five frontmen the Blues could target to keep Conte happy.

The controversial Argentine was linked with a move to Chelsea in April but the Blues’ interest cooled as they went after Lukaku. However, turning to Icardi may now be a realistic option.

Inter’s skipper matured into a top class striker last season. The 24-year-old’s game became more well-rounded and he is no longer just the man who finishes chances, he creates opportunities for his team-mates, too.

Icardi scored 26 times in all competitions and, tellingly, registered a further eight assists – in his first three years at Inter he’d only laid on 12 goals. His work-rate without the ball also noticeably improved as the skipper led by example.

Icardi wouldn’t come cheap and it would take a huge contract offer to turn his head as he stated his intention to guide Inter back into the Champions League in May.

However, the Blues already have a seat at European football’s top table and that could be enough, along with a bumper offer, to convince the striker to relocate to west London.

The RB Leipzig forward has been consistently linked with a move to the Premier League since the turn of the year but Liverpool have always been the club reported as having the strongest interest.

However, at 21 years old, Werner could be a long-term solution up front for Chelsea.

He scored 21 goals, finding the back of the net every 117 minutes. Werner is a striker that stretches a game as he is always willing to use his pace to run in behind opposition defences.

He has also become increasingly clinical in the penalty area and his movement without the ball is far more intelligent than it was 12 months ago.

However, Leipzig are under no pressure to sell and the club wouldn’t want to lose one of their key men ahead of a debut Champions League campaign.

Werner, who has also been scouted by Manchester United and Manchester City, has no buy-out clause so if Chelsea were to target the young striker they’d have to spend big money to sign him.

The Belgian helped ease Napoli’s pain of losing Gonzalo Higuain to Juventus last summer by becoming one of the most clinical strikers in Serie A during the 2016/17 campaign.

Before last season Mertens was seen as a gifted attacker but not one who would be chased by European football’s big guns. But being given the responsibility of spearheading the Napoli attack paid off handsomely and he struck 34 goals in 46 games last term.

At 30 years old, Mertens wouldn’t be a long-term solution and it would take a bid of around £45million to prise him away from Naples.

But if Chelsea are still struggling to bring in a striker come August, Mertens could turn out to be viable option.

It was back in January that the Spanish striker was first linked with a move to Stamford Bridge and Conte reportedly remains keen on bringing Llorente to Chelsea.

The former Athletic Club striker was crucial to Swansea surviving in the Premier League last season. Without his 15 goals in the English top flight there is little doubt Paul Clement would be preparing his Swans side for a Championship campaign this summer. 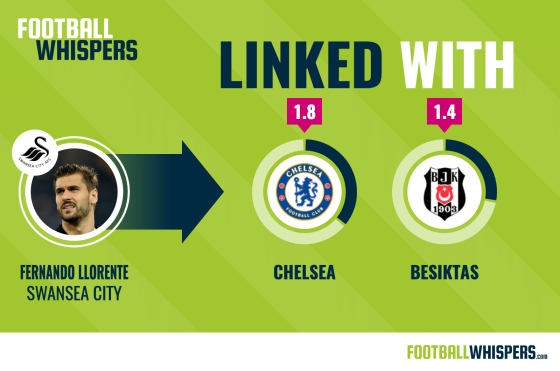 The 32-year-old has only one-year remaining on his contract and wouldn’t cost anywhere near as much as the other players on the list. However, he also is unlikely to be an outright first-choice given his age.

Llorente may also miss the start of the season due to a broken arm he sustained while cycling on holiday, but that wouldn't mean a deal couldn't be completed before the campaign gets underway.

The Arsenal striker has only one year remaining on his contract at the Emirates and, according to reports, has decided his future lies away from north London.

Manchester City are said to be leading the race to sign Sanchez, although Arsene Wenger believes he can convince the Chilean to stay and sign a new deal with the Gunners.

Chelsea were linked with a summer move for Sanchez earlier in the year as the forward enjoys living in London and doesn’t want to uproot his family (and his now famous dogs).

Sanchez would be the ideal man to replace Costa given his work-rate without the ball and his sheer hatred of losing. He would also link effectively with Eden Hazard and Pedro, who he played alongside at Barcelona.

The Gunners are standing firm in their desire to keep Sanchez but a big enough offer for a man with only a year left on his deal may just be enough to convince the Gunners to cash in.