The Premier League can be a hostile environment for footballing prospects. Its freneticism makes it a tough place to break out in, with the physical demands often too high for those without the rugged durability of experience. It is also a league of financial extravagance, where every result can seriously impact a club’s long-term sustainability. That pressure cannot often be shouldered by the young.

All of this has been mentioned, on numerous occasions, as one reason behind the continual underperformance of the England national team at major international events. There is no clear pathway for home-grown talent, some have argued, meaning the development of most stalls or ends at the fringes of the first team.

However, this outlook appears to be changing.

Along with the successful performance of England’s youth teams in recent competitions, many Premier League clubs are considering, or reconsidering, their own academy graduates. Two of the best examples of this last season were Everton with Tom Davies and Tottenham Hotspur with Harry Winks.

The start to the new Premier League campaign has only furthered the notion that some of the country’s finest youngsters are set for increasingly important roles at their respective clubs. Here are four to pay particularly close attention to this season.

The 19-year-old arrives in the Premier League on the back of a formative season at Championship level with Bristol City. In 41 league outings he hit 23 goals, the fourth-highest total in the division. And, after returning to parent club Chelsea, he was sent out on loan once again, this time to Swansea City.

The Welsh outfit survived in 2016/17 thanks to renewed tactical discipline installed by Paul Clement upon his appointment as manager. The former Chelsea, Real Madrid and Bayern Munich assistant brought in a well-defined 4-5-1 shape with defensive cohesion, ensuring the points necessary to stay up.

Leading the line as a lone frontman was Fernando Llorente, though there has been constant speculation about the Spaniard’s future. If he were to move on, Abraham would take his place. And even if not, a partnership between the two could work well.

With his gangly 6ft 4ins build, physical strength and confidence, the on-loan Chelsea man is an effective threat in the air or on the ground. He can hold up well, but also enjoys driving at opposition defences when the opportunity arises.

With Nathaniel Clyne absent through injury, Alexander-Arnold began the season as Liverpool’s right-back. And, while he may only be a stand-in at present, he could soon establish himself as his club’s first choice in the role.

The 18-year-old is no stranger to top-level football. He was integrated slowly into the squad last season, eventually making 12 appearances across all competitions. He continued to impress during pre-season, and his display against Watford last Saturday was one of the few positives in a difficult afternoon for his team.

Liverpool conceded three times, all of which were entirely preventable, to draw 3-3 in what was a dramatic yet disappointing beginning to their Premier League season. But Alexander-Arnold showed his class with some important defensive contributions mixed in with some positive attacking play.

He completed an impressive 70 per cent of his passes from the right flank, made some accurate crosses, and played two key passes. On that basis, he may be more effective going forward than Clyne. 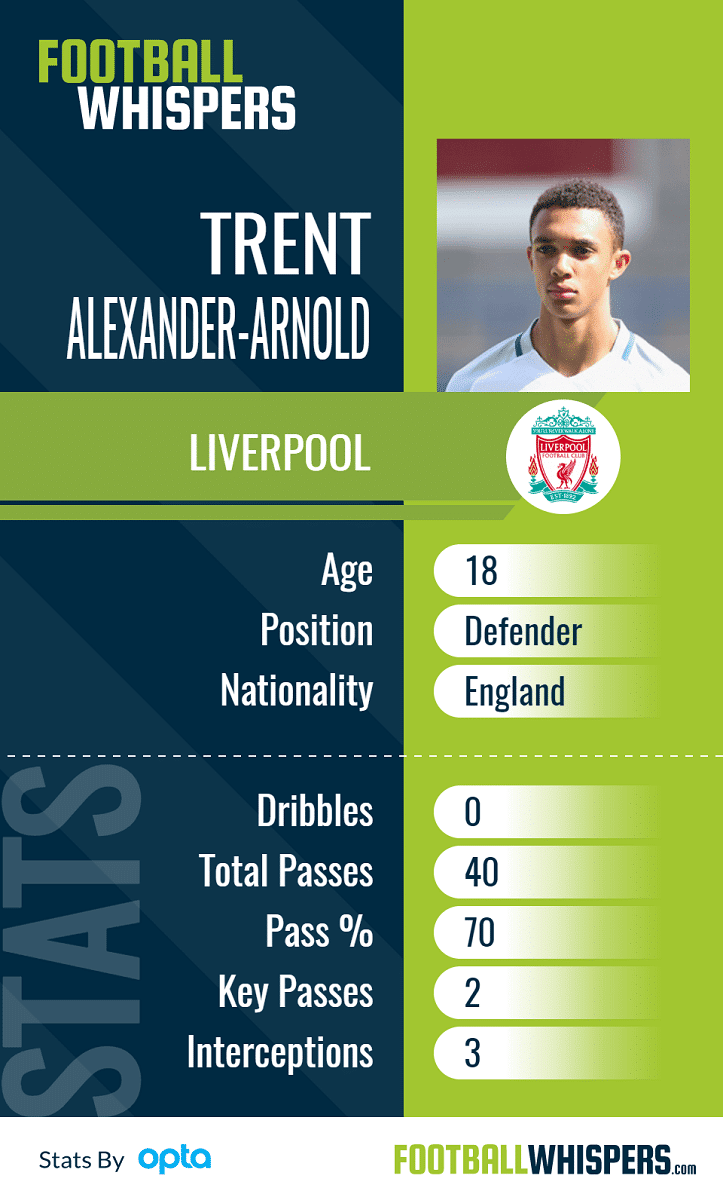 Foden was one of the breakout stars of Manchester City’s pre-season tour of the USA, putting in some remarkably mature performances against the likes of Real Madrid and Manchester United. In both games he evidenced superb technical proficiency and a level of tactical intelligence that belies his 17 years.

Along with Brahim Diaz, another diminutive and technically gifted left-footer, he returned to England with hope that he can continue his progress with a first competitive start. His manager, Pep Guardiola, is certainly keen on him, saying:

“I don’t have words…For us, he is a gift. He will stay and train with us in pre-season and maybe in the season he will stay with us because he is special.”

Having started on the substitutes’ bench for the trip to face Brighton and Hove Albion in Manchester City’s opening game of the Premier League campaign, Foden isn’t far away from making that all-important next step.

Some fans will no doubt have been rubbing their eyes when they saw the name Kyle Walker-Peters come up on their television screens as Tottenham’s line-up for their clash with Newcastle United was announced.

However, within a matter of minutes it was reconfirmed that Kyle Walker really had left for Manchester City, and that his long-term successor does indeed share the same name, albeit with an extra barrel on the end.

Walker-Peters was involved from start to finish as Tottenham defeated Newcastle 2-0.

Sky Sports gave him their man of the match award and it was clear to see why – he made one key pass, completed one dribble, and made two tackles.

With an unerring calmness on and off the ball, the 20-year-old gave the impression of being a mix of old and new.

A pragmatic dribbler as opposed to a flying pseudo-winger, he handled the occasion like a consummate professional. All of a sudden, it became clear why Spurs have yet to spend money on a replacement for Walker.