Manchester United‘s pursuit of Alexis Sánchez has been wrapped up, with the 20-time champions of England confirming the arrival of the Chilean forward, who will wear the No.7 shirt at Old Trafford, on Monday.

News of the Red Devils' interest in the now-former-Arsenal man came out of the blue earlier this month with most assuming it was only a matter of time before he joined Manchester City.

And, while United appeared to quickly jump ahead of their rivals, an official confirmation of the deal which saw Sánchez join José Mourinho‘s side and Henrikh Mkhitaryan move the other way still seemed to drag.

But with all the loose ends tied up and Sánchez now officially a United player, talk has turned to how Mourinho will utilise the 29-year-old. Although the Portuguese manager has been criticised for his perceived tactical negativity at times this term, his strongest team contains a handful of established attacking stars, one of whom will have to make way for Sánchez.

For the majority of his two years at Arsenal, Sánchez featured on the left wing, a position in which he could isolate his opposing full-back and threaten goal when coming inside on to his stringer right foot. And last season we saw how deadly the 119-cap Chile star can be when operating centrally as a false nine, scoring a career-high 30 goals and registering 13 assists in all competition.

Additionally, he's played as a No.10 in the past for Arsenal and, earlier in his career, during spells with Udinese and Barcelona, Sánchez featured regularly on the right wing. So he gives Mourinho plenty of options.

Here are four ways United could line up with Sánchez. 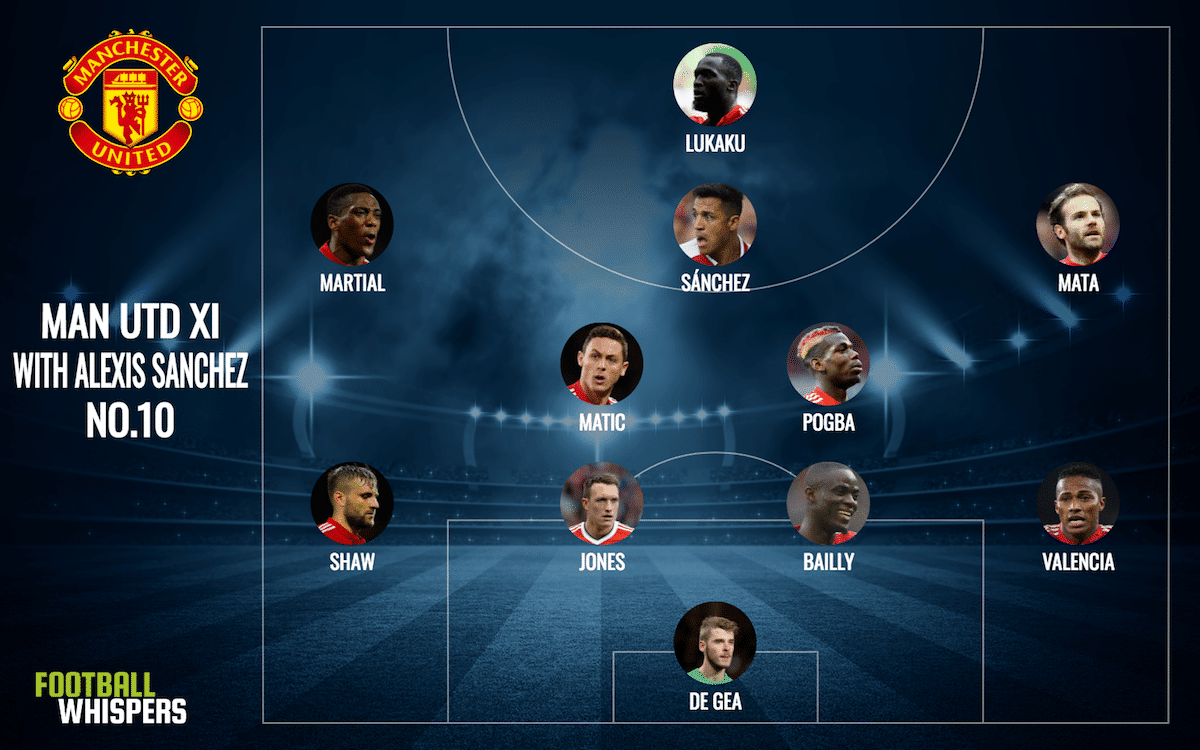 With Mourinho favouring a 4-2-3-1 formation since his arrival at Old Trafford, the most obvious place for Sánchez to slot into is the No10 role, offering the new recruit the freedom to operate across the second line of attack and link with striker Romelu Lukaku.

From there, Sánchez could put to use his dribbling and ability to play incisive one-twos to help United break down stubborn backlines, something which has, at times, proved troublesome for the Red Devils in recent seasons.

While Sánchez isn't a traditional No.10 by any means, not the kind of lock-picker through whom all of a side's attacks can be funnelled, operating in this role places him optimally to threaten the goal.

Looking back over the 80 goals he scored for the Gunners, the former Barça man is capable of scoring every type of goal, be it a 25-yard curler, a neat finish from a tight angle or a tap-in from close range; playing just off Lukaku would position the Chilean well within the danger zone.

The decision for Mourinho would then be who to start on the right flank, choosing between the in-form Jesse Lingard and the more considered approach of Spanish playmaker Juan Mata. 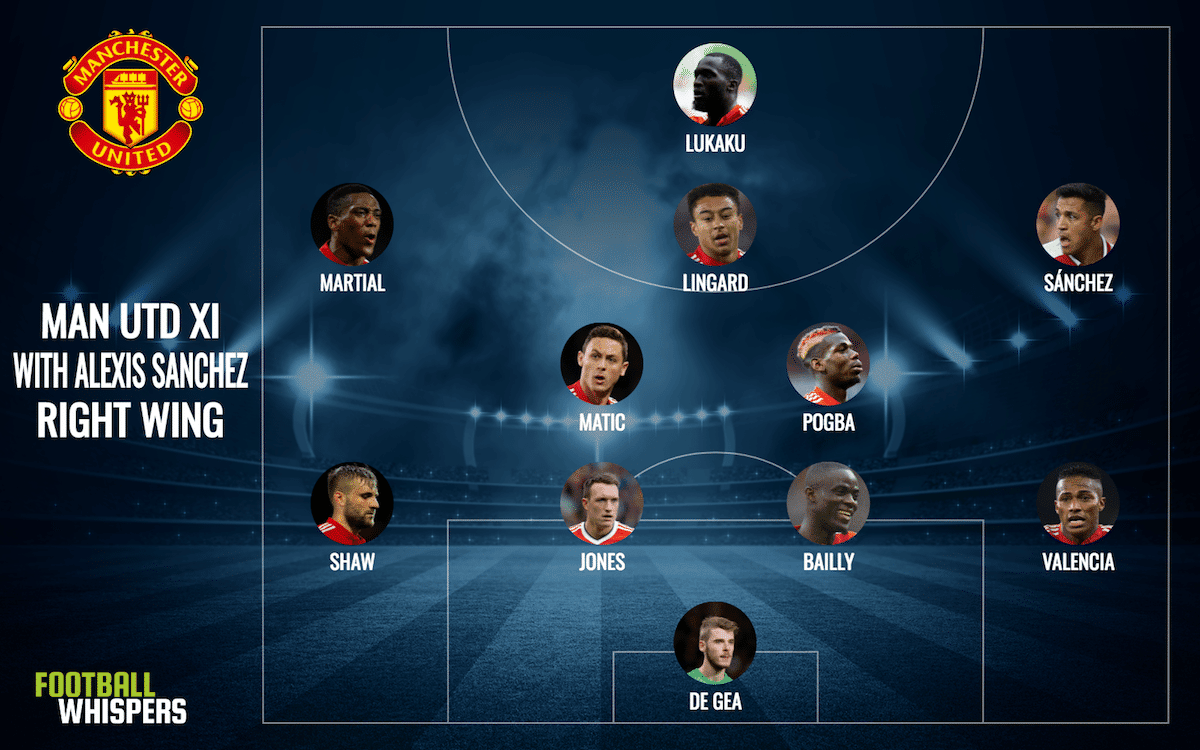 In superlative form over the last couple of months, Lingard would be unfortunate to lose his place to Sánchez, and deploying the ex-Arsenal man on the right wing might be Mourinho's best option for fielding both men.

This provides the option of positional interchanging between Sánchez and Lingard, with both comfortable centrally or on the right side of attack; the Englishman's pressing and workrate from the No.10 position has proven invaluable to United when out of possession.

Although Sánchez hasn't played on the right consistently since his Barcelona days, the Chilean would be an asset on the counter-attack if returned to the role, while his ability to time runs into the half-space remains one of his biggest attributes and would add a new wrinkle to the United frontline. 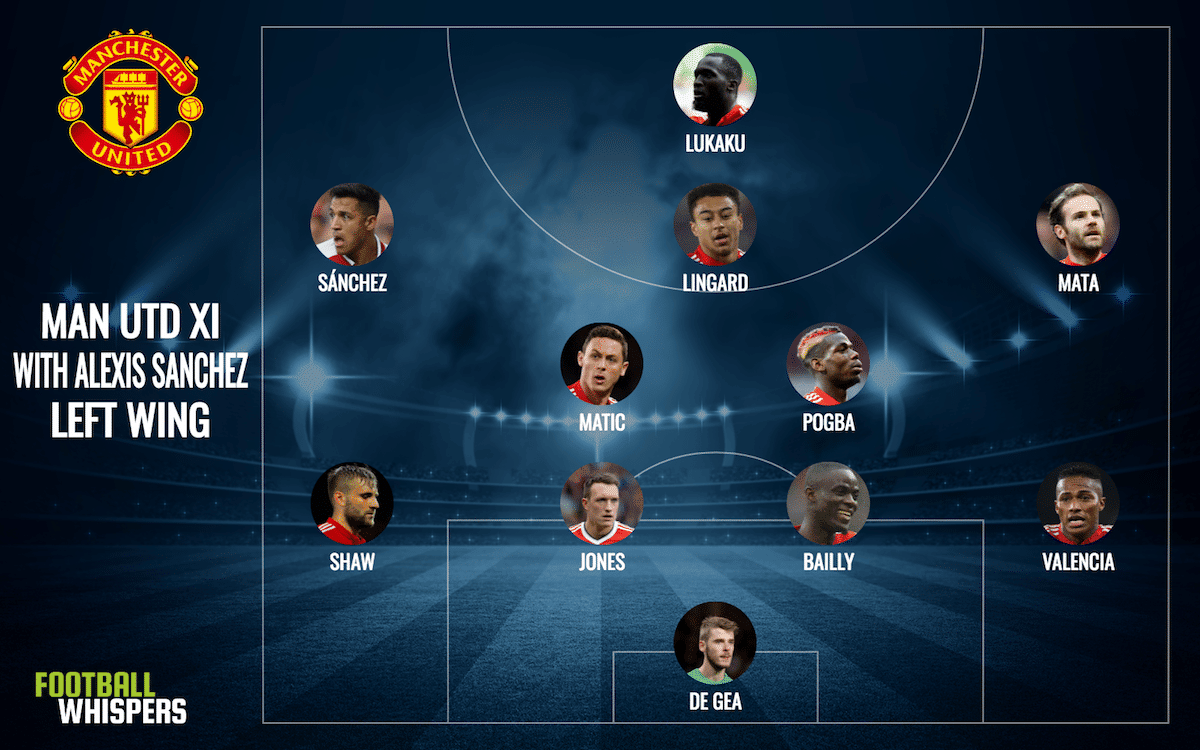 Having carved out a reputation for himself as one of the Premier League's best players from his berth on the left side of Arsenal's attack, Sánchez would perhaps be most at home in the same role at Old Trafford.

The issue with this option, however, is that it would mean either redeploying Anthony Martial elsewhere or dropping the vastly improved Frenchman altogether, something United fans would be reticent to see and could have a detrimental effect on the 22-year-old's development.

Marcus Rashford, although out of form recently, has also found the majority of his game time on the left wing in recent seasons, and regularly using Sánchez in this position would put a further obstacle in the young Englishman's path to regular action. 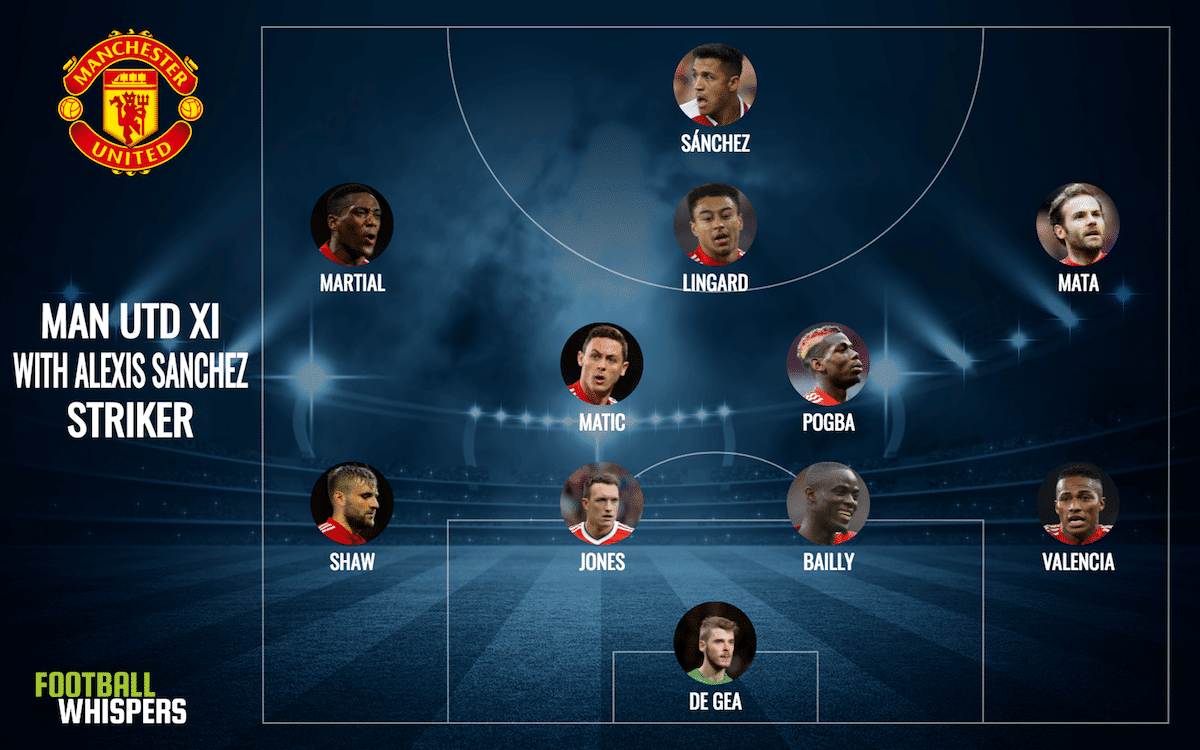 A fourth option, with Zlatan Ibrahimović continuing to struggle with injuries since re-signing with the club last summer, is to utilise Sánchez as a central striker, deputising for Lukaku when the £75million Belgian is unavailable or rested.

Sánchez doesn't offer the same physical presence as Lukaku, but he would add a greater degree of mobility and inventiveness up top. His propensity for roaming from the central zone would also present opportunities for the likes of Martial and Lingard to break ahead of the ball into scoring positions more regularly.

Having forked out a hefty fee to sign Lukaku from Everton last summer, playing Sánchez as a striker is likely to be regarded as little more than a plan B, but a viable and potentially effective one all the same.

Linked with additions in central midfield, Mourinho might be eying a long-term switch to 4-3-3, a system which would provide a better platform for record signing Paul Pogba. This would remove the option of fielding Sánchez as a No.10, but could see the Chilean even more effective in a wide role due to the increased space opened up by the lack of a central attacking midfielder behind the striker, allowing him to roam inside at will.

The financial details of the deal have been speculated over and scrutinised, but securing Sánchez is a huge coup for United. Not only have they acquired world-class attacker, they've got a player capable of transforming their starting XI in a number of roles.