Chelsea ended Manchester City‘s unbeaten start to the Premier League season by winning 2-0 at Stamford Bridge to ensure Liverpool will end the weekend top of the pile.

The Blues were scarcely able to get out of their own half in the opening 45 minutes but took a shock lead in first-half stoppage time.

It was route one, but it was effective. A long ball forward from David Luiz eventually found Eden Hazard who rolled a pass across the face of the box for N'Golo Kanté to leather home.

Chelsea grew in confidence in the second half and doubled their lead 12 minutes from time in controversial circumstances when substitute Ross Barkley won a corner. Replays were inconclusive in determining whether his shot had been deflected wide or not.

Regardless, Hazard took the kick and Luiz deft headed looped the ball over the helpless Ederson to clinch a big three points for the hosts.

But what did we learn from Stamford Bridge? Here are four talking points…

The big news prior to the game was the fact neither side would line up with a proper No.9. Without Sergio Agüero due to injury, Manchester City elected to start birthday boy Raheem Sterling in what is nominally the centre-forward position – ahead of Gabriel Jesus.

Goalless in the Premier League since netting in the 6-1 trouncing of Huddersfield Town in mid-August it was clearly felt the Brazilian lacked the form or confidence for such a big game. Jesus led the line at Watford on Tuesday but missed several presentable opportunities as City eased to a 2-1 win.

Meanwhile, Chelsea coach Maurizio Sarri opted to leave Álvaro Morata out of the matchday 18 entirely. When pressed on the matter in his pre-match interview the Italian explained it was a ‘tactical' decision. Tactical or otherwise, it was a big statement.

The Spaniard has regressed to the mean somewhat in recent weeks, failing to net in the Premier League since a flurry of three goals in two games at the end of October/start of November.

Hazard was the man chosen to spearhead the Blues' attack with Olivier Giroud only a substitute. The Belgian was quiet for long periods, but he was starved of service. Yet, when it mattered most, he provided a telling moment of quality, rolling the ball into the path of the arriving Kanté.

Sterling, on the other hand, was far more involved as City tried and failed to break down a resolute Chelsea defence. Yet the England man had nothing to show for his endeavours. 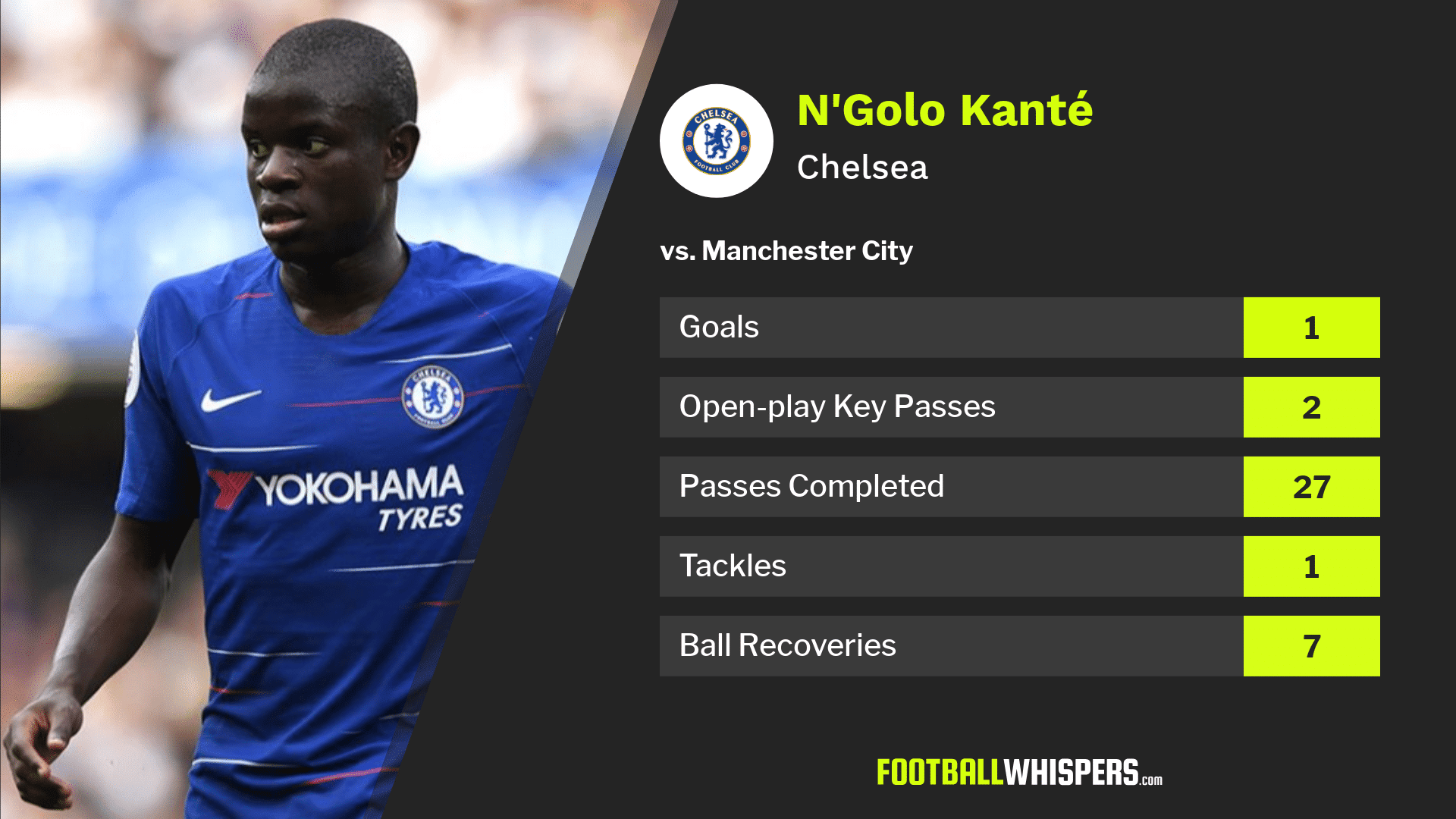 Chelsea have come in for some flak in the last fortnight after suffering their first Premier League defeat of the season at the hands of London rivals Tottenham Hotspur. In that game summer signing Jorginho was brilliantly nullified by Dele Alli – the first time the Italian had been unable to conduct Chelsea's play this season.

Jorginho has rightly been lauded for his impact in the early weeks of the season. But the knock-on effect on Kanté's role in the side has been scrutinised of late. Perceived wisdom suggests that while the Italian is a peerless as a user of the ball, ousting Kanté from his natural position is unwise.

Yet the diminutive Frenchman showed against City why Sarri trusts him to play in a slightly unfamiliar role. He was tireless, but that is taken as read. What we aren't used to seeing is the timing of his run into the penalty area to open the scoring, leaving Leroy Sané red-faced. It was reminiscent of a certain Frank Lampard.

More surprisingly, still, he created as many chances (2) as Hazard and Sané. He's one of the world's best in his own position – but he's not bad out of it either.

Chelsea show how to get at City 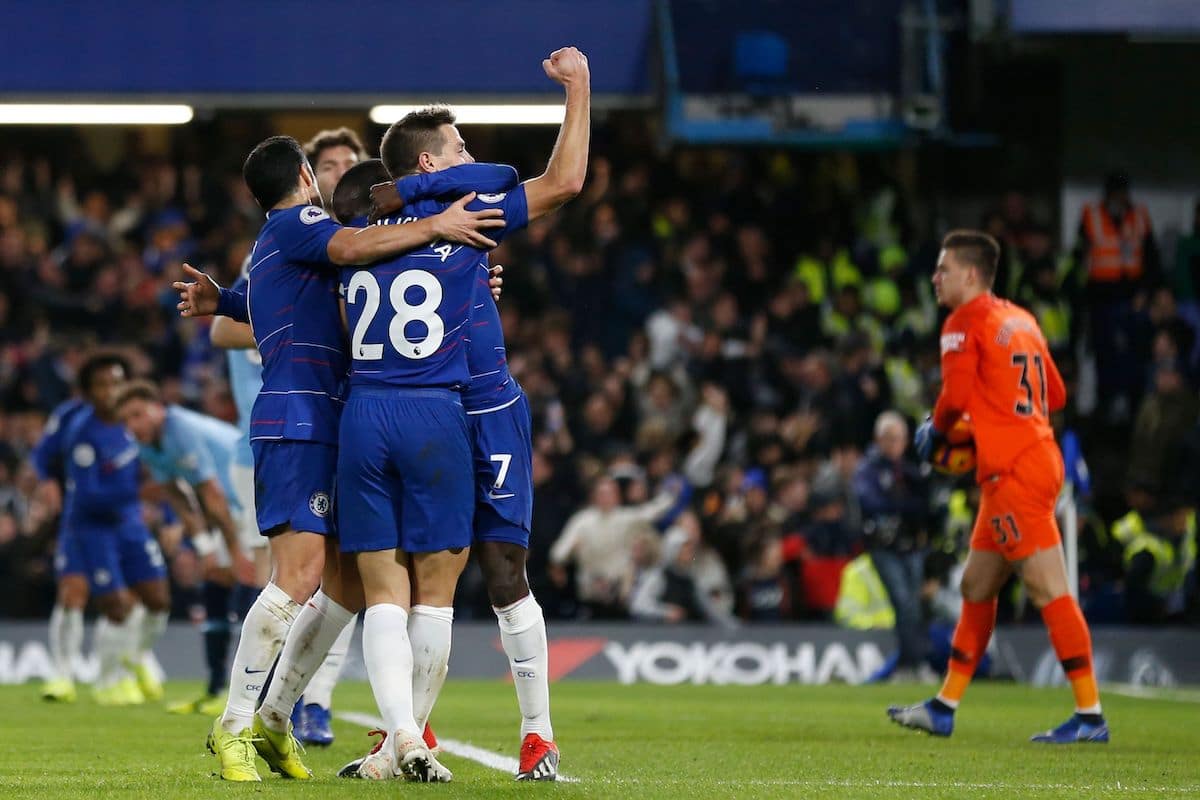 For 45 long minutes Chelsea offered nothing. That wasn't, strictly, their fault. The intensity of Manchester City's press made it almost impossible for the Blues to breath, let alone hold onto the ball for long enough to create anything of note.

Chelsea had not completed so much as a single pass in the final third as the first half drew to a close. Yet when the hosts changed tact in stoppage time they were instantly rewarded.

Luiz raked a long ball forward and the play eventually saw Hazard square the ball to the edge of the penalty area where Kanté escaped everyone's attention to lash into the roof of the net first time.

It was hardly a goal straight out of Sarri's playbook. The former Napoli coach preaches a passing game, after all. But it showed the merit of being tactically flexible and willing to adapt. By going direct Chelsea got in behind the Manchester City defence for the first time and it proved mightily effective. 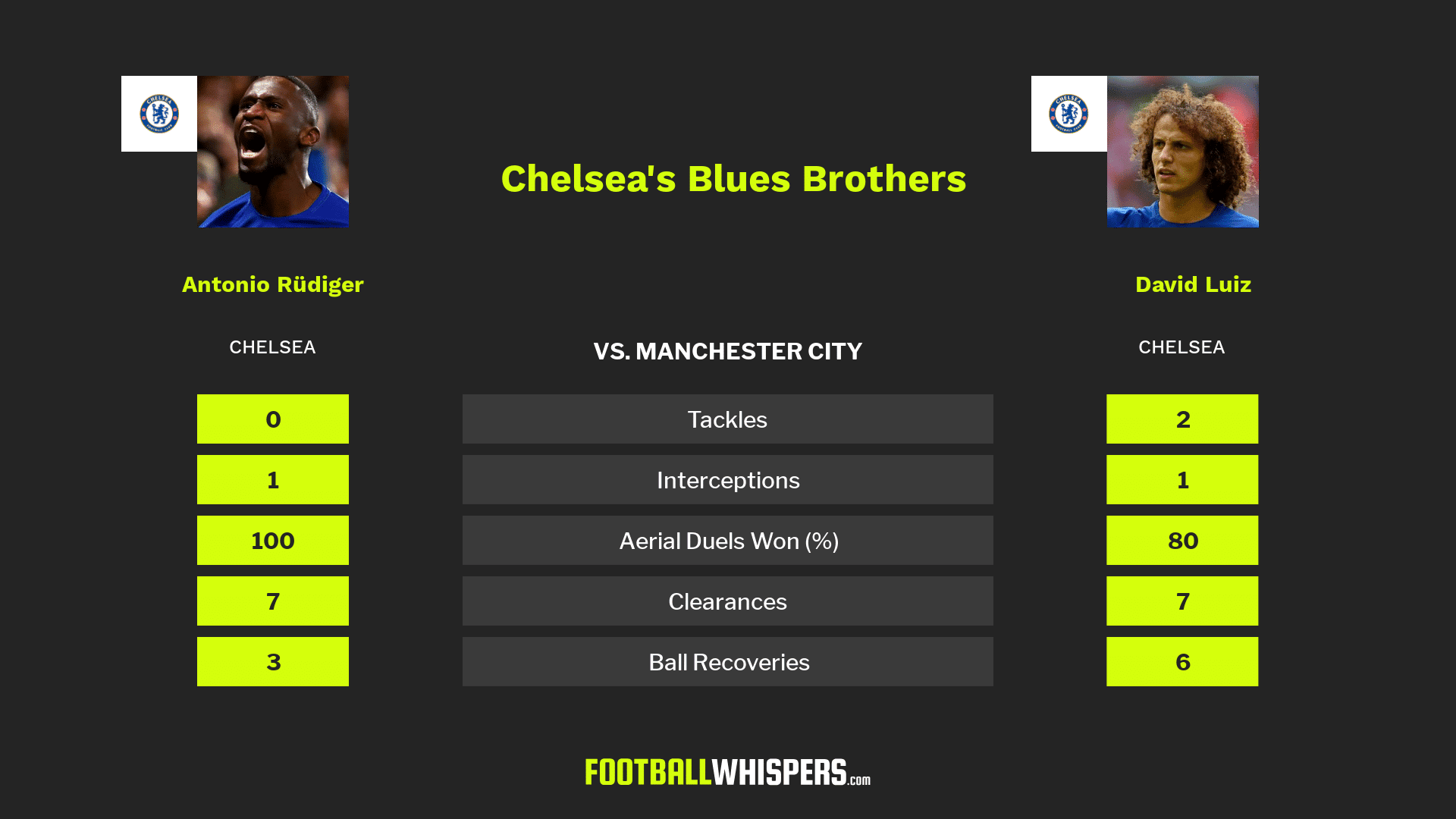 They've both had their critics at times but heading into this game Luiz and Antonio Rüdiger knew they were going to be in for a stern examination. And they passed with flying colours.

For all Manchester City's possession and territory – in the first half in particular – the Blues' defensive duo kept the champions at bay and it was no coincidence Sterling, Sané and David Silva all endured frustrating afternoons.

Luiz, in particular, veers wildly in terms of his performance level. He wasn't so much out of favour under Antonio Conte as he was on the scrapheap. The Brazilian even admitted earlier this season he would have left Chelsea for a second time had the combustible Italian remained in charge at Stamford Bridge. Thankfully for Chelsea – in more than one sense – Roman Abramovich saw fit to make a change.

But Sarri has salvaged the Brazilian and restored him to something like his former glory this season. There was a reminder of the depths he can reach in that defeat to Tottenham at Wembley where he was back to his ‘PlayStation defender' worst but today he was imperious.

As was Rüdiger and, for that matter, skipper César Azpilicueta. The back four got in the way of everything and it was telling that the best chance the visitors had was of Chelsea's own making as Kepa Arrizabalga passed the ball straight out İlkay Gündoğan.