The 2015/2016 Premier League season threw up plenty of surprises. Leicester winning the league, Manchester City scraping into the Champions League despite spending over £100 million on two players and Chelsea finishing tenth. This meant Mauricio Pochettino's achievement of having his Tottenham Hotspur side in contention for the title didn't get as much acclaim as it might have done in previous seasons.

The team eventually ran out of steam. Their lack of depth really started to show towards the end of the season. Their star players started to tire and two points from the final twelve points on offer culminated in a third place finish with city rivals Arsenal  toppling them to second place.

It must have been a bittersweet season for everyone involved. They surpassed expectations with a third place finish but after running Leicester so close for so long the collapse must've been hard to swallow, especially considering they failed to finish ahead of Arsenal yet again.

Much like he did when he was in charge at Southampton, Pochettino is using this transfer window to systematically upgrade on the squad in the hope of building on the positives of last season. A better squad overall is integral as Spurs look to negotiate their way into the latter stages of the Champions League but also maintain a good level in the EPL. The club haven't sold any of their important players and to date they've added Victor Wanyama and Vincent Jannsen for a combined £28 Million. Rumours suggest the signing of Marseille's Georges-Kevin Nkoudou is inevitable.

With the two signings so far the squad already looks healthier. Wanyama, who has worked with Pochettino in the past and knows all about his style and system, comes in and gives Spurs some much needed depth in that area. He's capable of playing alongside or instead of Eric Dier in the centre of midfield. It means if Dier is used elsewhere Spurs still have a solid enough base in midfield. Janssen arrives from the Eredivise with a reputation of goals having scored 27 in 34 games last season. He's not in the same class as Harry Kane, yet, but unlike last season it gives Spurs an option. It's no longer Kane or bust for them.

However, if Spurs want to challenge on all fronts next season these can't be the only arrivals at White Hart Lane this summer. With the new TV money coming into play, coupled with the Champions League money and a few players leaving, it's safe to assume Spurs have money left to spend. 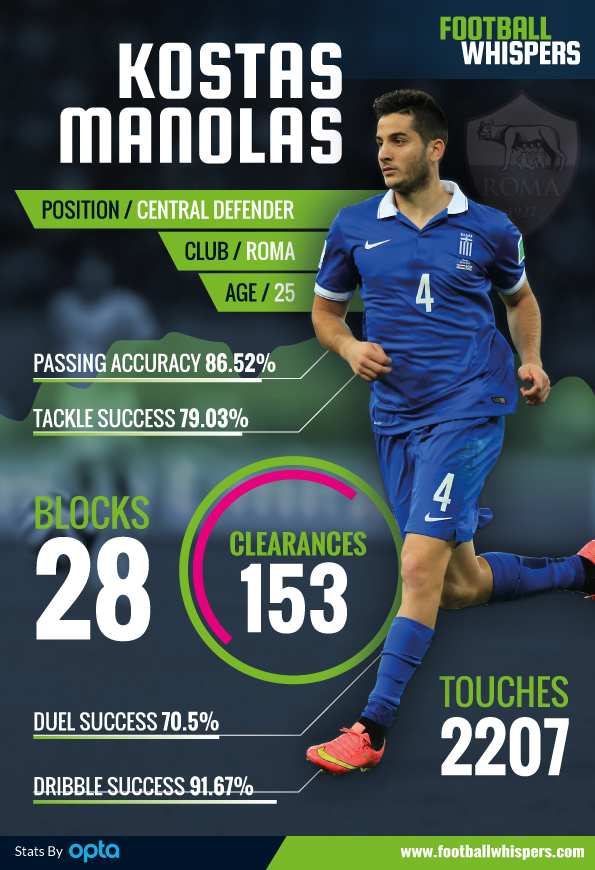 Spurs had a fairly solid defence last season but it was heavily reliant on the individuals staying fit. Both Toby Alderweireld and Jan Vertonghen were fortunate enough not to miss many games. Their back-up centre-backs aren't the requisite quality, or anywhere near the level needed, for if either of these two have long term injuries. Vertonghen is already missing the start of the season with an injury he picked up at the Euros and the alternatives to him are Kevin Wimmer and Federico Fazio.

Roma's centre-back would be an ideal signing. At 25 he's still not near his peak defensive years but he's already considered a potentially world class defender. The Greek, who usually plays as a right sided centre-back, has many strengths to his game and all of which would suit the Premier League and more specifically Spurs. He's a good tackler and doesn't always go to ground, he's part of a front foot defence at Roma and it'd be similar at Spurs. he's aerially dominant, confident with the ball, has good pace and is fairly reliable having started 36 of the 38 Serie A games last season. 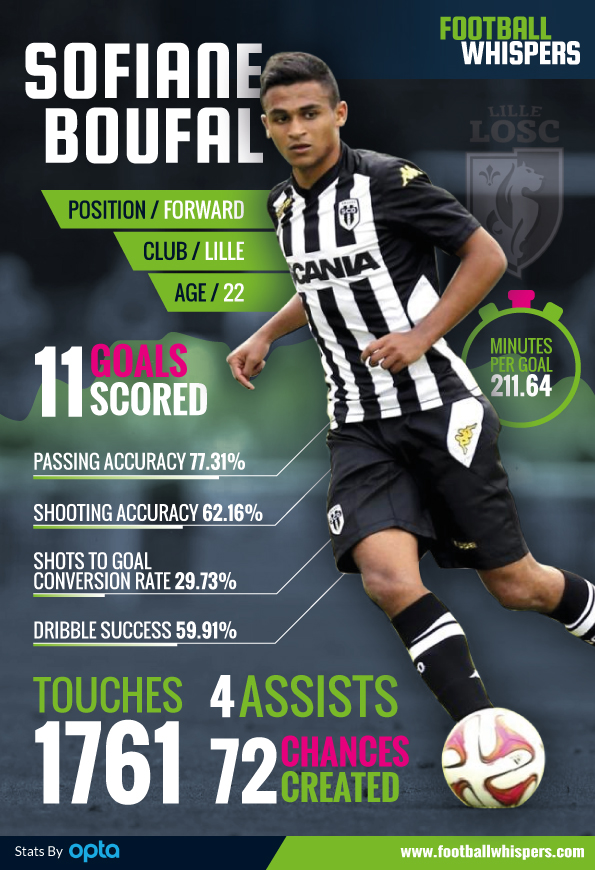 The 22 year old talented Lille attacker has had a meteoric rise.  Less than 18 months ago he was playing for Angers in Ligue 2 and now he's on the radar of many of Europe's big clubs after having yet another impressive season with Lille. A rocky start to the season saw Boufal struggling but post mid-season break in France he really showcased his talents as he fired Lille into the Coupe De Ligue final.

When Spurs signed Heung-Min Son from Leverkusen it was clear Pochettino wanted goals from out wide as well as a player with a good work rate. The South Korean didn't set England alight and Spurs may look to upgrade on him. Boufal offers goals from wide, an impressive work rate and a lot of potential.

He finished the season in Ligue 1 with a 60% dribble success rate which is invaluable within the Premier League. The ability to dribble past a high press and break defensive lines is highly regarded in the modern game. He finished with 11 goals off of 37 shots in total, 4 assists having created 72 chances and an impressive 82% tackle success rate. 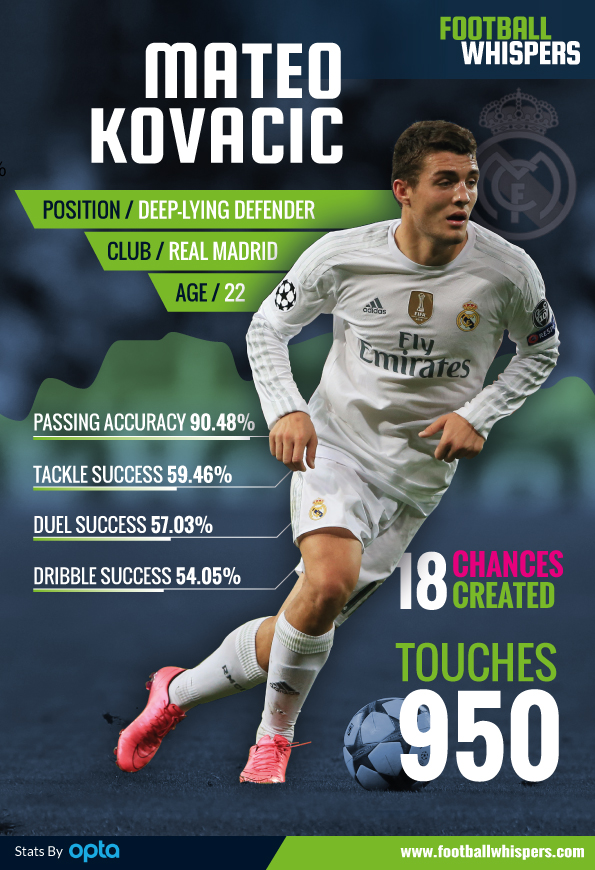 Kovacic was touted as the next Luka Modric from a young age. After a stop start season at Real Madrid it may be best for him to join the club where Modric actually developed into the player he is today.

He has a lot to offer any club. While at Inter Milan he played a variety of positions and beside many different midfield partners. He played as part of a midfield two and a midfield three. It's this flexibility that makes him perfect for Pochettino's system. He could comfortably play beside Eric Dier/Victor Wanyama in a two or alongside Dembele and Dier in a three. He presses the ball, dribbles from deep and despite his slight frame he's robust in the tackle.

Spurs are in danger of becoming overly reliant on Christain Eriksen of for his creativity but signing Kovacic but help share the burden. 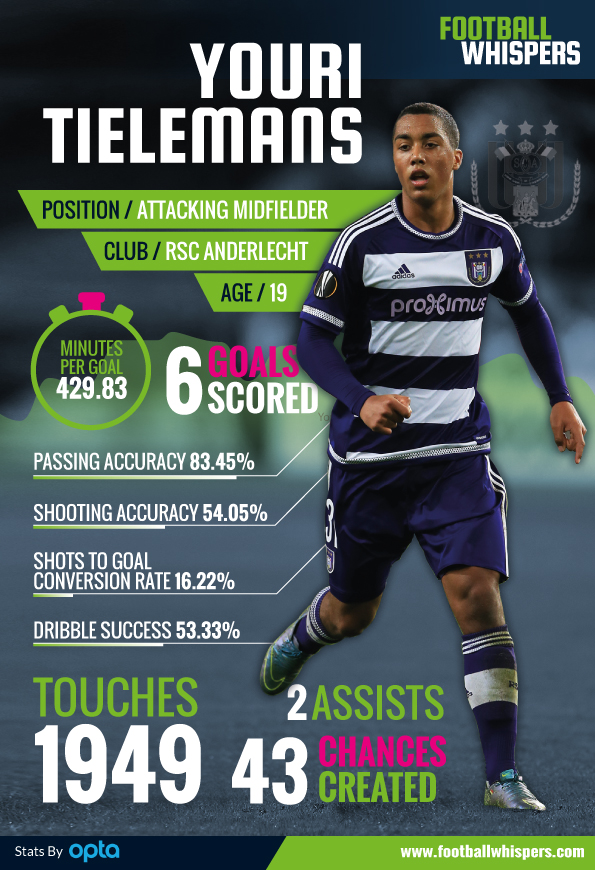 The Anderlecht midfielder is tipped to be the next big Belgian star. The 19 year old has already played over 100 games for his club side, appeared in the Champions League, has represented his country at u16 and u21 level and has been linked to the likes of Atletico Madrid and Borussia Dortmund.

Watching him play you can't help but feel he's going to be one of the best midfielders of his generation. He seems to be a mixture of a box-to-box midfielder and a roaming playmaker. He has great vision, immaculate technique and a touch of ingenuity which helps separate him from his peers. He could well be an upgrade on his compatriot Moussa Dembele in years to come for Spurs and would fit in well with this young Spurs side.

Click here to view all the Tottenham Hotspur transfer rumours