Managers of Rafa Benítez’s ilk can seem like endangered species or heritage brands in this bright new age of open, expansive attacking football, in which defending is looking increasing a lost art.

However, whereas one his main partners in pragmatism, Manchester United boss José Mourinho, appears out of touch and step with the changes in the modern game, Benítez’s gameplan have never been more “peak Rafa”, yet continues to guarantee results, albeit at a slightly lower level.

To label Benítez a strict defensive coach is a little unfair – he is more about balance and not letting one area of the field have an adverse effect on the other – but his impressive work at St James’ Park last season was built predominantly on protecting their own goal.

Of the top 14 sides in the Premier League, only Burnley scored fewer (36) than Newcastle United’s 39, but the Toon had the seventh-fewest goals conceded, with 47. Without that defensive record – although their opposition expected goals (xG) of 1.42 per game was sixth-worst in the division – they’d have undoubtedly been in more of a relegation battle.

This method may have been dictated by the paucity of attacking options Benítez had all season – with signing a striker his top priority this summer – but it was telling, in selection, how he leant on those more committed to defending.

None more so in the full-back area, which to many teams is as much a source of goal-scoring opportunities as midfield and attack. But Benítez, in the main, compelled his nominated left- and right-backs to remain at home, and those who couldn’t do that fell by the wayside.

DeAndre Yedlin was by far the most openly offensive, and the American enjoyed a fine season, but even then he was only ranked 33rd among all Premier League full-backs for open-play key passes per 90 minutes (0.57) and 55th for touches in the opposition penalty area (0.38).

Chancel Mbemba’s tendency to adventure forward saw him replaced, through injury and then form, by the far more stoic Paul Dummett or Javier Manquillo – playing out of position as a right-footed left-back – while Massadio Haidara and Jesús Gámez played a combined 100 minutes.

Of those six full-backs, at least three won’t be at the club by the start of the next season, with Gámez and Haidara having left the club and Mbemba on the verge of a switch to Hoffenheim, who will be playing Champions League football next season.

With Benítez expected to stick around on Tyneside on the proviso he will have money to spend, reinforcing his full-back department, particularly on the left, will be of the utmost importance. But to continue to improve Newcastle and enhance them as an offensive side, will he have to break from the norm?

With that in mind, we analyse four possible additions, based on attributes and market value, which could sing the right Toon for Benítez… 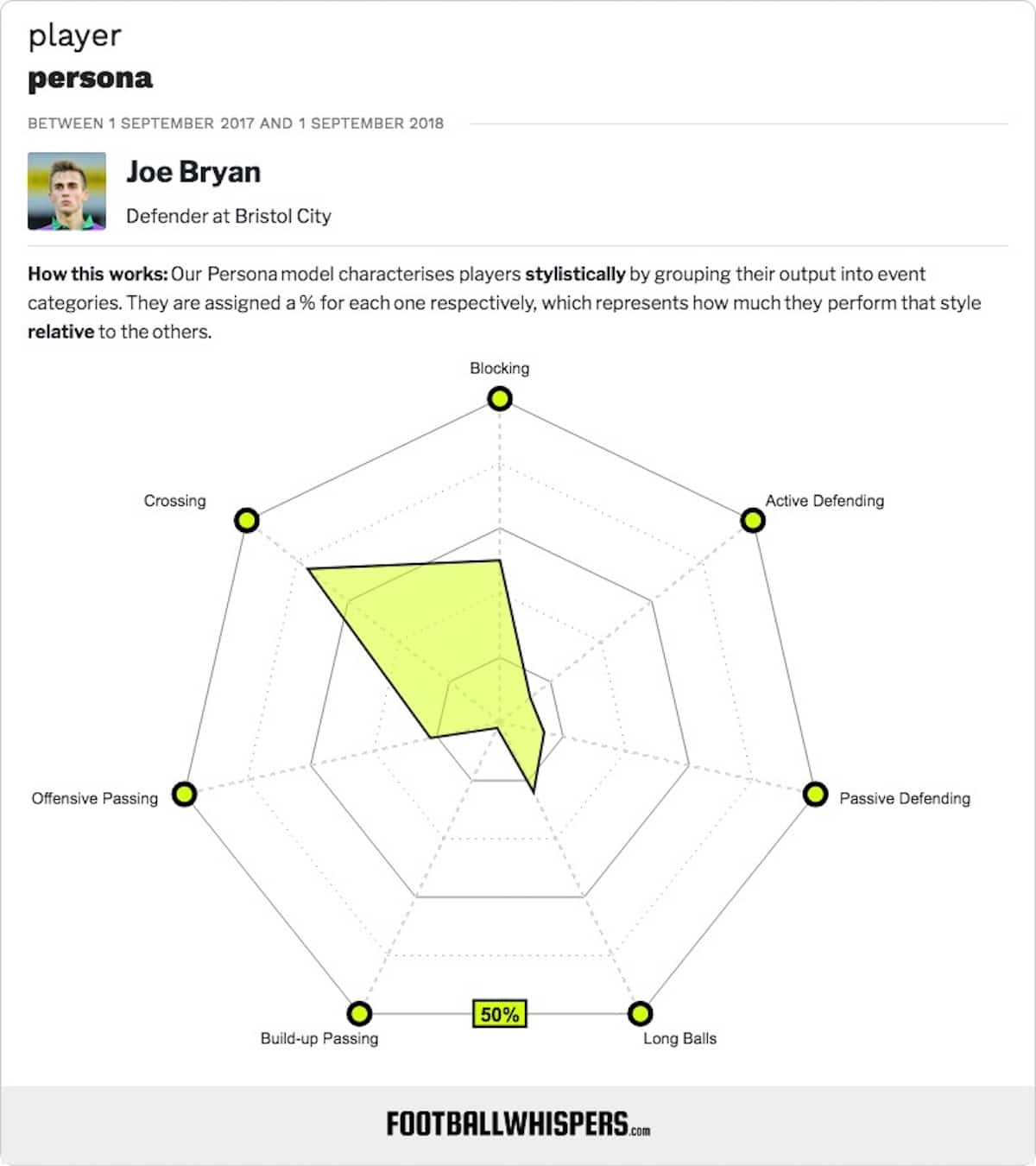 With just one year remaining on his deal at Ashton Gate, and with Bristol City’s promotion hopes taking a nosedive in the final quarter of the season, all signs point towards Bryan leaving the Robins.

City chairman Steve Lansdown had previously put a £10million price on his head, but if the Championship side are to get anything approaching that, either they sell now or miraculously negotiate a new contract with the 24-year-old.

The more likely is probably the former, with Bryan well aware of Premier League interest following a season in which he scored five goals and added three assists in 43 league games, emphasising not only his consistency but also his durability.

Bryan led the Championship among full-backs for successful take-ons per 90 (1.78) and was sixth for overall scoring attempts (1.15), but that attacking potency was complimented by him ranking third in tackles per 90 (3.03) and tenth for interceptions (1.9).

His ability to play in midfield as well means he should have the technical ability for the top-flight, and he is of an age where his ceiling is yet to be hit.

A major issue for Newcastle, however, is the volume of clubs after Bryan, with Burnley, Everton and Aston Villa, should they earn promotion, all interested, and the Clarets believed to have made an initial bid of £6million. 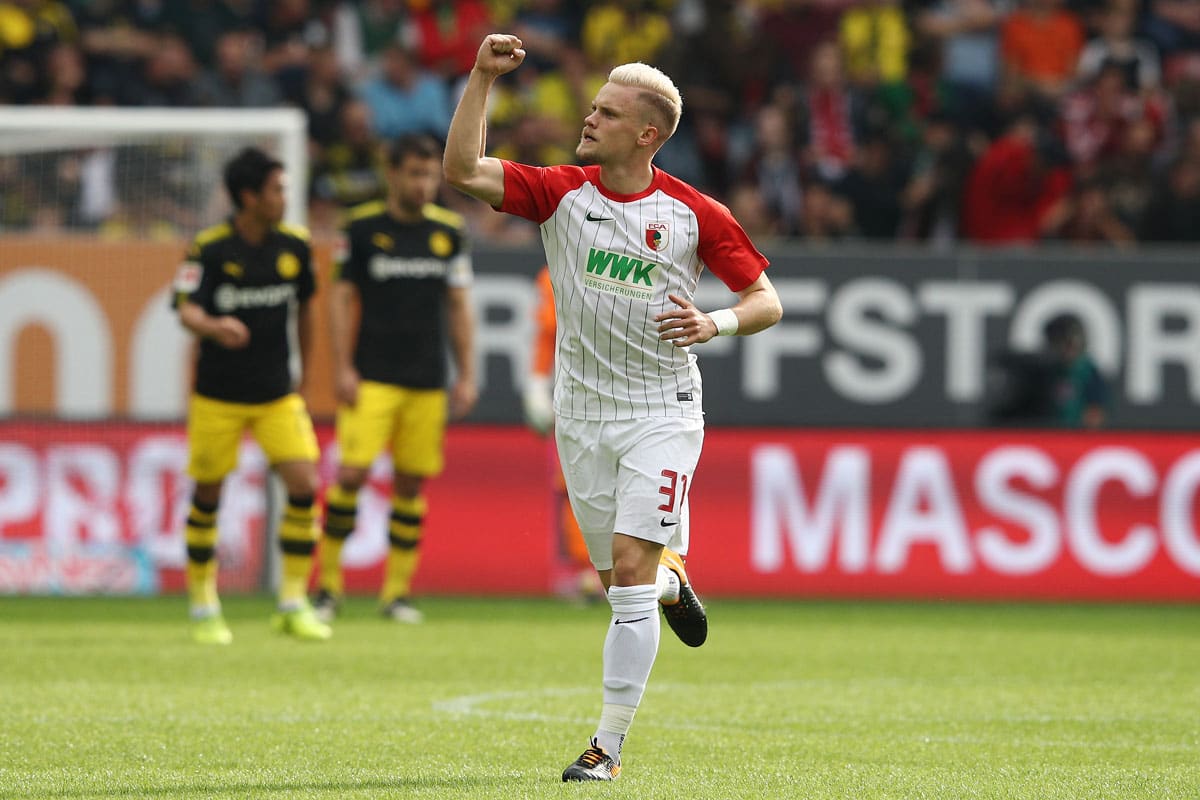 Competing with Bayer Leverkusen’s Brazilian Wallace as the best left-back in the Bundesliga, the 24-year-old is unlikely to be sticking around in Augsburg much longer.

Max would make for a slight departure for Benítez as he errs more on the attacking side, having delivered an astonishing 12 assists in 33 games for mid-table Augsburg, and his 1.0 open-play key passes per 90 was the third-highest by a full-back in the Bundesliga.

Those statitics may render him a long shot for Newcastle, who don’t have Champions League or even European League football to tempt Max. But Premier League salaries still remain a useful currency in negotiating with players.

A silver medallist for Germany at the Rio Olympics in 2016, Max has shown an appetite to scrap throughout his career, dropping down a division in 2014 to play for Karlsruher after failing to make the grade at Schalke, and has patiently learned his trade at Augsburg.

Defensively, Max didn’t have quite the same impact, ranked 31st for tackles per 90 (2.0) and 34th for interceptions (1.18), in a team whose average possession of 46.7 per cent had them regularly on the back-foot.

That may well pose a slight red flag for Benítez, especially if Augsburg hold out for their reported value of £25million, as the likes of Borussia Dortmund and Everton keep tabs on the 24-year-old. But he’s unquestionably much better than what they already have and could, based on his development, prove a real star. 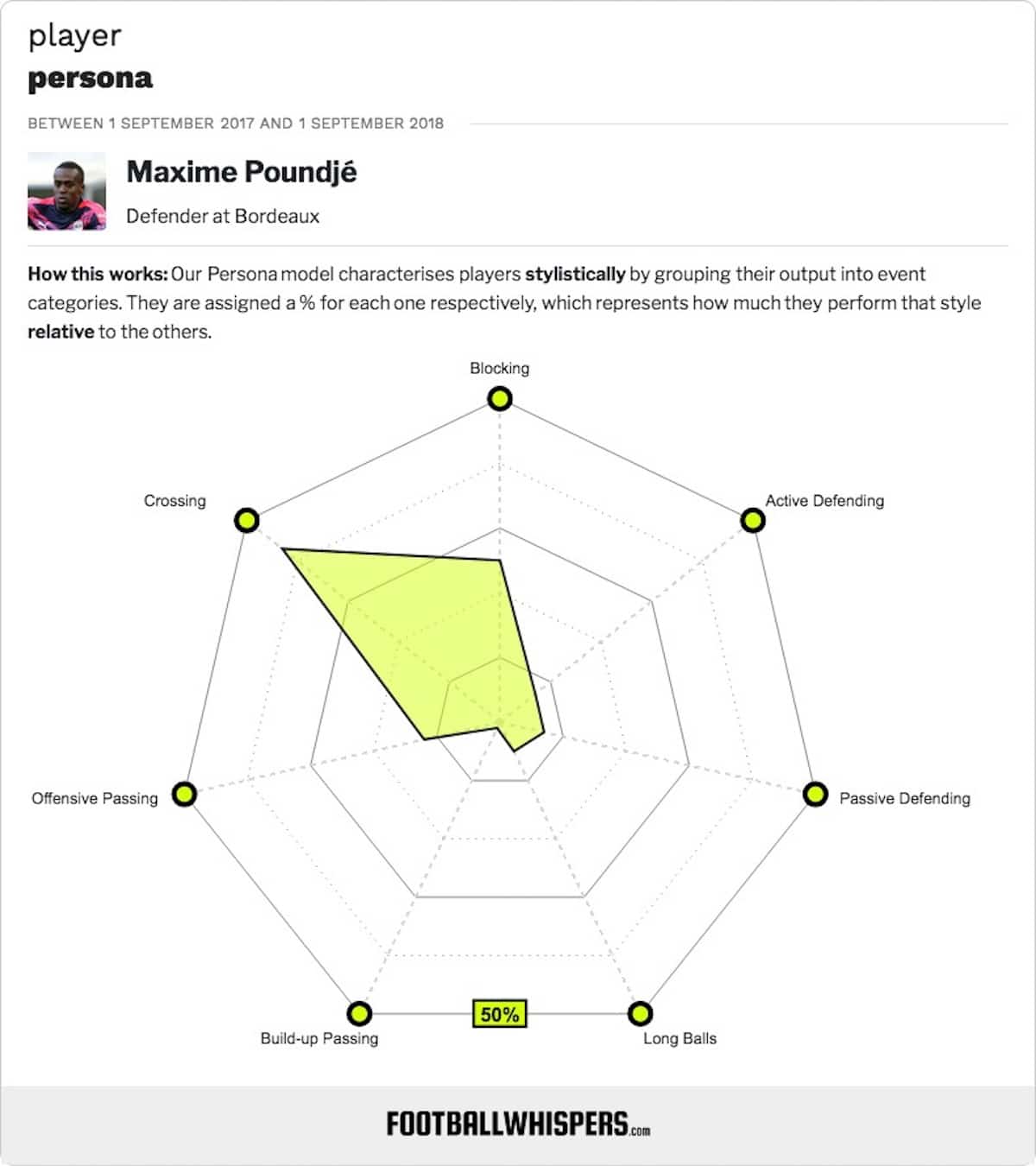 Graham Carr may have moved on, and Newcastle have suffered as many misses in terms of French imports as hits, but that doesn’t mean their recruitment team will turn a blind eye to Ligue 1. Especially with so much affordable talent available.

Poundjé was one of several major positives to emerge for Bordeaux this term, whose bright start led to thoughts of the Champions League, only for a mid-season collapse to bring them crashing back down to reality.

The 25-year-old came into the side in mid-December in place of Théo Pellenard and, under Gustavo Poyet, delivered a solid body of work which has increased optimism that he will realise the potential he’s threatened ever since making his debut for the club as a teenager.

Brazilian talent and reported Tottenham Hotspur transfer target Malcom may not be the only one of leave the Matmut Atlantique this summer, as Poyet admits the club may already be resigned to losing Poundjé, as he stalls over a new contract offer with just one year remaining on his current deal.

Statistically, the very un-Benítez 1.84 successful take-ons (seventh in Ligue 1 for full-backs) and 0.79 scoring attempts per 90 (11th) stand out, but there is considerable more to his game that an athletic full-back galloping down the flank.

His lack of consistent minutes over his career should raise concern; were his 19 appearances a freakish purple patch rather than Poundé finally rewarding a coach for consistency in selection? It’s almost impossible to know, but, given his contract situation and value, this wouldn’t be a high-risk acquisition. 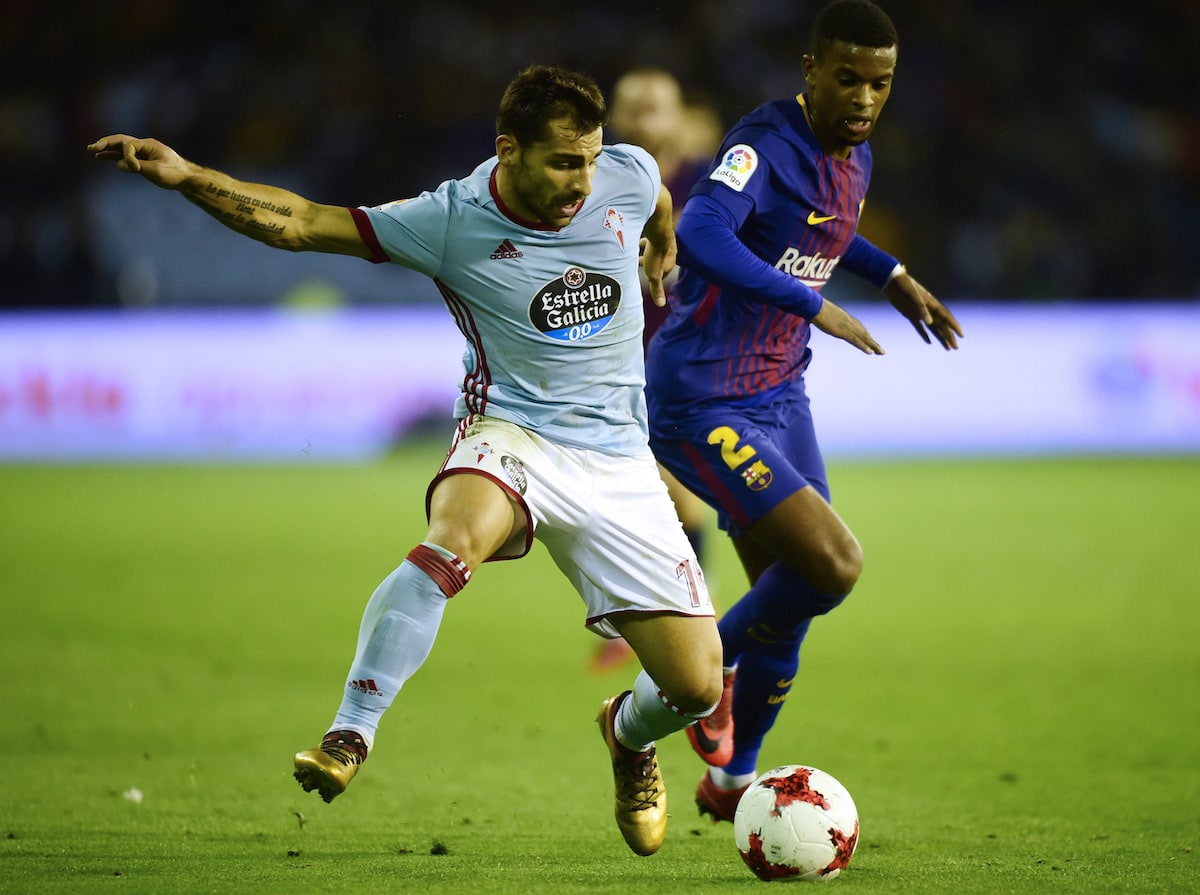 The Spanish market is never far from Benítez’s heart (how else do you explain his unnerving faith in Joselu, despite such an indistinct time at Stoke City?) and Celta Vigo’s Jonny is a full-back who ticks several boxes.

Firstly, it’s worth pointing out that signing the 24-year-old could prove an uphill struggle, given he’s reportedly on Diego Simeone’s shortlist, which, in itself, is affirmation of his ability as a defender, seeing as the Atlético Madrid coach tends to know a bit about that area.

But should Atleti pursue other options, Jonny would make for a very agreeable Newcastle target.

He’s equally comfortable as a left- or right-back, similar to Manquillo, so makes for a fine squad addition, as well as troubling the first XI. And his tenacity and energy would certainly endear him to the St James’ Park crowd.

Outside of those credentials, he’s enjoyed the best season of his career, albeit in a Celta side who have underperformed, mainly, it has to be said, due to their generous defending.

But in failure comes opportunity, as the Galicians lack of European football should ensure his price is in the region of £10-£15million, and there’s no way a Bentez-led side would ever play as fast and loose as Juan Carlos Unzué's Celta, which can never be much fun for defensive players.

Statistically, there is much to admire. Jonny ranked second among La Liga full-backs for interceptions per 90, with 2.61, and his 2.86 tackles ranked him 11th this term,. He’s also a reliable passer, with 41.06 attempts per 90 at an accuracy of 83.9 per cent, which placed in 11th in La Liga.

Jonny hasn’t had the same creative impact as the other players on this list – 30th for open-play key passes per 90 (0.59) and his 0.05 xA90 (expected goals assisted per 90) was down in 48th – nor is he much of an attacking force, with just 1.29 touches per 90 in the opposition box, but his defensive numbers perhaps make him the most Benítez-friendly of them all.