While it's fair to say none of the Leicester City side, perhaps with the exception of Kasper Schmeichel, have managed to live up to last season's high standards, the centre-back pairing of Robert Huth and Wes Morgan arguably have the best excuse.

With a combined age of 65, while neither are over the hill just yet it's little surprise that last season's exploits have appeared to catch up with them this time around. Morgan in particular has succumbed to a back problem in recent weeks, which is remarkably his first injury since the Foxes' promotion in 2014, ending a run of 88 consecutive league starts.

The captain's absence has left Leicester dangerously exposed at the back, with Yohan Benalouane deputising, and while Molla Wagué arrived in January, the club will be on the lookout for further reinforcements this summer. With that in mind, here are a handful of options that should be on their radar.

Danish centre-half Frederik Sørensen's career has been a curious one.

The Dane was signed as a teenager from Lyngby by Juventus and started 12 league games for the Old Lady in his first season at the club, ahead of a co-ownership deal with Bologna. He would spend the next two and a half seasons with I Rossoblu before a return to Turin, subsequently being loaned to Verona prior to a permanent transfer to Germany with Cologne in 2015.

Indeed, while he failed to make the grade at Juventus, the fact that the Italian giants picked him up from the Danish league speaks of his potential at the time, and he's certainly begun to prove what a capable defender he is.

Still only 25, Sørensen's versatility is a bonus, capable of filling in at right-back, but he has excelled at the heart of the defence this season. Of his 26 league starts, 15 have come from that position, exhibiting a commendable reading of the game having completed 83 tackles and 78 interceptions, leading the way for Cologne in both departments.

Having overcome adversity in his career, Francesco Acerbi has come out the other side stronger and been a rock for Sassuolo at the back.

Upon signing for the club in 2013 a testicular tumour was found in pre-season, undergoing surgery to return to the fold almost immediately. He then failed a drugs test that he claimed was down to his treatment, before the tumour returned and the defender was diagnosed with cancer. He again overcame the set-back, training whilst receiving chemotherapy, and would go onto become a key player before long, making his international debut later that year.

While Sassuolo have struggled this season, Acerbi has remained pivotal to their survival, with his anticipation and positioning invaluable to Eusebio Di Francesco's young side.

It's believed that the 29-year old would be open to a new challenge, however, and with 2.7 interceptions per game in Serie A — as well as the joint most in this season's Europa League along with Leicester's Wilfred Ndidi (4.8) — he'd be an astute signing for a number of Premier League sides in the summer. 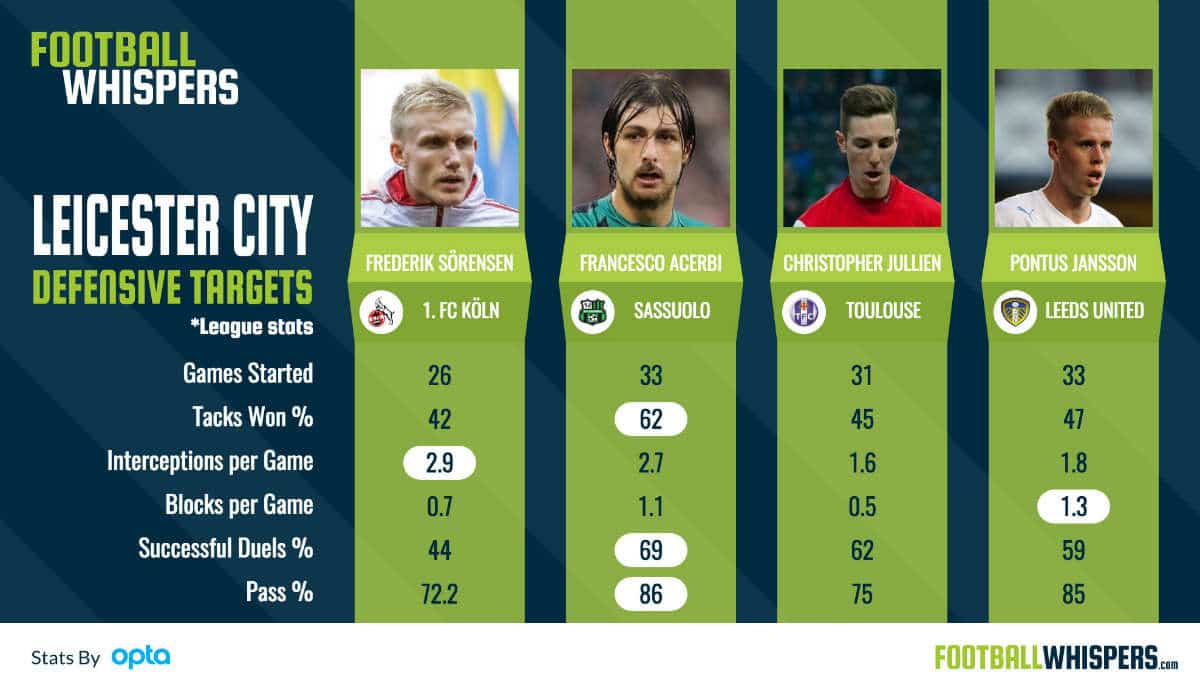 He may have only signed for Toulouse last summer, but Christopher Jullien has proven more than up to the task of top-flight football. The lanky centre-back gained quite a reputation in Ligue 2 on loan at Dijon, helping the side to promotion courtesy of a remarkable nine goals, and it was TFC that won the race for his permanent signature from Freiburg. At 24 he is still very young and has bags of potential, and it wouldn't be a surprise if Jullien's time with Toulouse was relatively short lived.

He utilises his height superbly at either end after all, with another four goals to his name in the current campaign, whilst winning 4.4 of 5.6 aerial duels per game. Indeed, a 78.2% success rate is enough to rank fourth of 245 players to have competed in at least 100 aerial battles across Europe's top 5 leagues.

On the deck the Frenchman doesn't dive into tackles but positions himself well to alleviate danger, averaging 7.5 clearances per game.

Already linked with a number of Premier League clubs, it would be a surprise if Leicester weren't among those monitoring Jansson's situation after the player's agent confirmed he will be looking to play top-flight football next season.

After another defeat that's looking less and less likely to be with Leeds United, and the Swede has certainly proven this season that he is capable of playing at a higher level. Akin to the likes of Morgan and Huth with respect to being a full-blooded and committed centre-back, the 26-year old is more cultured than either.

Nevertheless, averages of 10.3 clearances and 1.3 blocks per game are both superb figures, even in the scrappier surrounds of the Championship, and Jansson would be a good fit at the King Power, both in terms of playing style and ambition.

A move to a top tier team is perhaps beyond him just yet, but a club in mid-table with designs on a potential European finish would certainly suit the Sweden international at this stage in his career.