For the first time in 11 years, when Barcelona and Real Madrid meet on Sunday for the first Clásico of the season, club football's biggest domestic fixture will feature neither Cristiano Ronaldo nor Lionel Messi.

With their ten combined Ballon d'Or wins, the pair have been the primary focus whenever La Liga's (and possibly the world's) two biggest clubs have collided over the last decade.

Of course, with Ronaldo signing for Juventus in the summer, Madrid have known for some months that they would have to face their greatest rivals without their greatest goalscorer. For Barça, though, who lost Messi to a broken arm suffered against Sevilla last weekend, there has been little time to plot a way to win this crunch tie without their captain and superstar.

The reigning champions of Spain overcame Inter Milan in the Champions League without Messi in midweek, strolling to a comfortable 2-0 victory which will have eased fans' apprehension ahead of Sunday's clash with Madrid.

And, while Messi, the world's greatest player, will certainly be missed, Barça boss Ernesto Valverde has a wealth of attacking options at his disposal, with several potential solutions to the problem of how he sets his side up without the magical No.10.

Here, we've taken a look at three such options, all potentially strong enough to secure three points against the underperforming back-to-back-to-back Champions League winners at the Camp Nou. 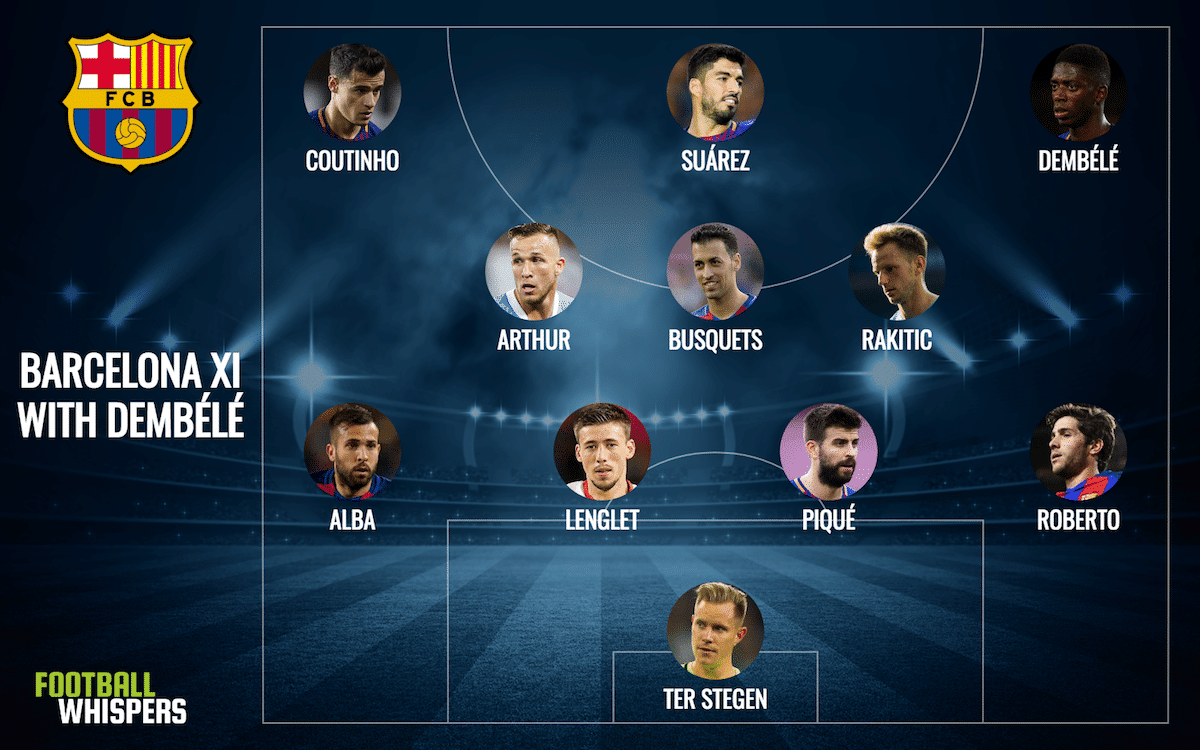 When Messi was taken off clutching his afflicted arm after 26 minutes against Sevilla, it was Ousmane Dembélé who replaced the Argentinian.

After a first season with Barça marked out by injury and inconsistency, the 21-year-old Frenchman, La Liga's second-most expensive import after team-mate Philippe Coutinho, began 2018/19 in style.

The France international returned from Les Bleus‘ triumphant World Cup campaign this summer and hit the ground running at club level, scoring spectacularly in the Spanish Super Cup, one of five goals in his first six appearances of the season.

However, with the gifted and versatile attacker still raw and developing, it seems Valverde has little patience with Dembélé and the manager cuts a visibly exacerbated figure on the touchline whenever the former Borussia Dortmund star loses possession carelessly.

As such, it is likely Valverde would deem starting Dembélé in the Clásico to be an unnecessary risk, but it is such risk-aversion that leads many to believe the Barça boss is not a great fit for the ethos of the club, with maverick creators long adored inside the Camp Nou.

There is reason to believe Dembélé is the best option to replace Messi, too: he is the Barça attacker who comes closest to the captain when measuring creativity, with the second-best average for expected goals assisted per 90 on the team (0.3 to Messi's 0.48).

There are safer options than Dembélé, but playing is safe just isn't Barcelona's style – even if it is Valverde's.

Forgotten man Rafinha did the business against Inter 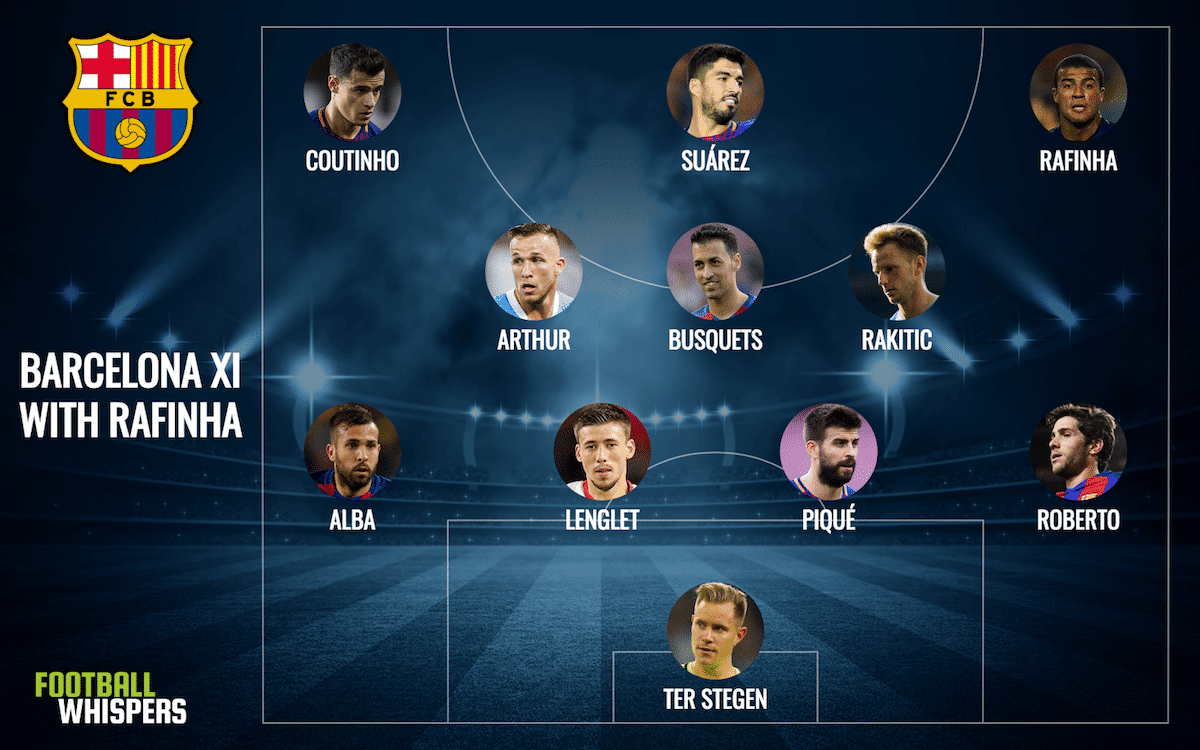 Rafinha was preferred to Dembélé against Inter and the man who spent the second half of last season on loan with the Serie A side scored the opening goal.

Back at Barça this term, Rafinha has been the forgotten man, featuring in just 59 minutes of La Liga action.

Rotating into the team against Inter, few expected the Brazilian to pull up any trees, especially starting wide on the right side of attack, with a deeper, more central remit much more his style.

But a 72-minute display, which included a confident finish for the game's first goal, three shots on target, one chance created and a pass accuracy of 94.4 per cent, means Rafinha is a strong contender to start again when Los Blancos visit.

Rafinha also offers some tactical possibilities that will please Valverde. Even starting high on the right, the 25-year-old offers a level of defensive diligence – used to playing deeper in midfield and even as a wing-back on occasion two seasons ago – none of his positional rivals can match, while he also presents the option of dropping in to augment midfield in a way Dembélé wouldn't be comfortable. 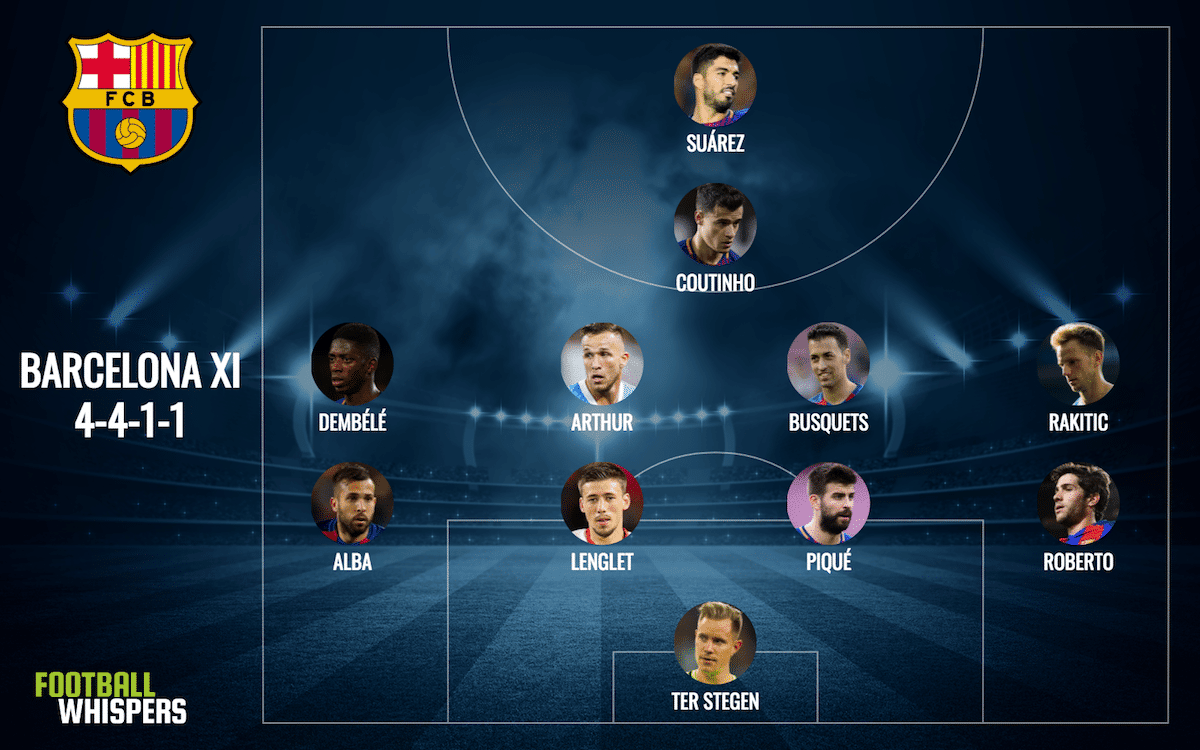 In addition to the personnel rejig it necessitates, Messi's absence might also convince Valverde to tinker with Barcelona‘s formation.

The Blaugrana have predominantly lined up in 4-3-3 this season, with Messi drifting inside from the right and either Coutinho or Dembélé stationed wide on the left.

Last season, though, Barça more often set up with a flat back four and a conventional four-man midfield, with Messi in a free role behind Luis Suárez, making a 4-4-2/4-4-1-1 shape.

The criticism of this approach was that it placed an even greater creative burden on Messi than usual, while it's rigid banks of four lacked adventure.

It was, however, a difficult structure for opponents to break down and, faced with the prospect of taking on Barça's greatest rivals without Messi, Valverde may once again lean towards the stability this system gave him for much of last season.

The question then becomes: who is deployed in the ‘Messi role' behind Suárez? And for this Valverde again has multiple options.

Although he lacks Messi's dynamism, Coutinho is capable of splitting defences with slide-rule passes and is a major goal threat from within 25 yards, so he could thrive in the hole.

Dembélé could also fulfil the role, with his pace, dribbling and ability to go either way making him a daunting prospect in central zones.

The pair could interchange, too, with one occupying the more advanced remit while the other keeps shape on the left. Brazilian winger Malcom is a wildcard option, but the fact he only has 25 La Liga minutes under his belt suggests Valverde is yet to be convinced of his virtues.

No matter how talent-packed the team, transplant Messi in and they will natuarally become reliant on him; he is, after all, arguably the greatest player of all time. As such, he will be sorely missed in the Clásico.

Barça have no shortage of options without him, though. Selecting the right one is where Valverde must show his managerial mettle.