Everyone knows Real Madrid and Barcelona can sign who they want, when they want, just ask Tottenham Hotspur about Gareth Bale, or Liverpool about Luis Suárez.

But beyond the top two, Spanish clubs can have difficulty holding onto their best players, especially if England comes calling.

The finances of the Premier League dwarf what ordinary Spanish clubs could offer, often making financial proposals that they can't turn down.

And the Premier League should try and take advantage of that this summer.

Here are three underrated players plying their trade in Spain who could thrive in England.

Every season since Villarreal‘s return to the Spanish top flight in 2013, Manu Trigueros has taken on a more and more important role for the Yellow Submarine.

How Much Is The Spain U21 Squad Worth… by FootballWhispers

He’s now an integral part of Fran Escribá’s side, who are managed their fourth consecutive top-six finish in 2016/17.

The midfielder managed five La Liga goals last season – the most he’s managed in a single campaign, but that’s not what he’s about.

The 25-year-old is a classy ball-playing midfielder in the middle of the pitch who can pick out a pass with ease.

He signed a new contract in November, keeping him at the Estadio de la Cerámica until 2022, with a reported buyout clause of €40million (£33million).

It’s a lot of money, but you would imagine Villarreal would settle for less. He’d be a good signing for any club with, or pushing for, European football.

The Barcelona transfer rumours surrounding Trigueros at the start of the summer just underlined his quality – and perhaps with the signing of Pablo Fornals, Villarreal could sell for the right price.

Eibar striker Sergi Enrich was a Fulham transfer target at the beginning of last season, with the Whites offering around £3.5million for him last August, according to Sky Sports.

If they saw the season he had last year, they would have been regretful they were unable to bring in the out-and-out striker in – perhaps he would have been the man to take them up, without Chris Martin‘s middle-of-the-season Derby County saga.

He's a poacher, with all of his strikes from inside the box.

While Fulham would undoubtedly love to bring him in again, you would expect Enrich to aim higher.

He signed a new contract in February, which undoubtedly will have upped his original €10million release clause.

Eibar's record sale was Florian Lejeune to Newcastle United – at £8.5million according to Transfermarkt – you would imagine that they would ask for a little bit more than that, but probably not too much more than around £15million.

And with the inflated prices in the Premier League now, paying that for the 27-year-old could well work out as a very good bargain indeed. 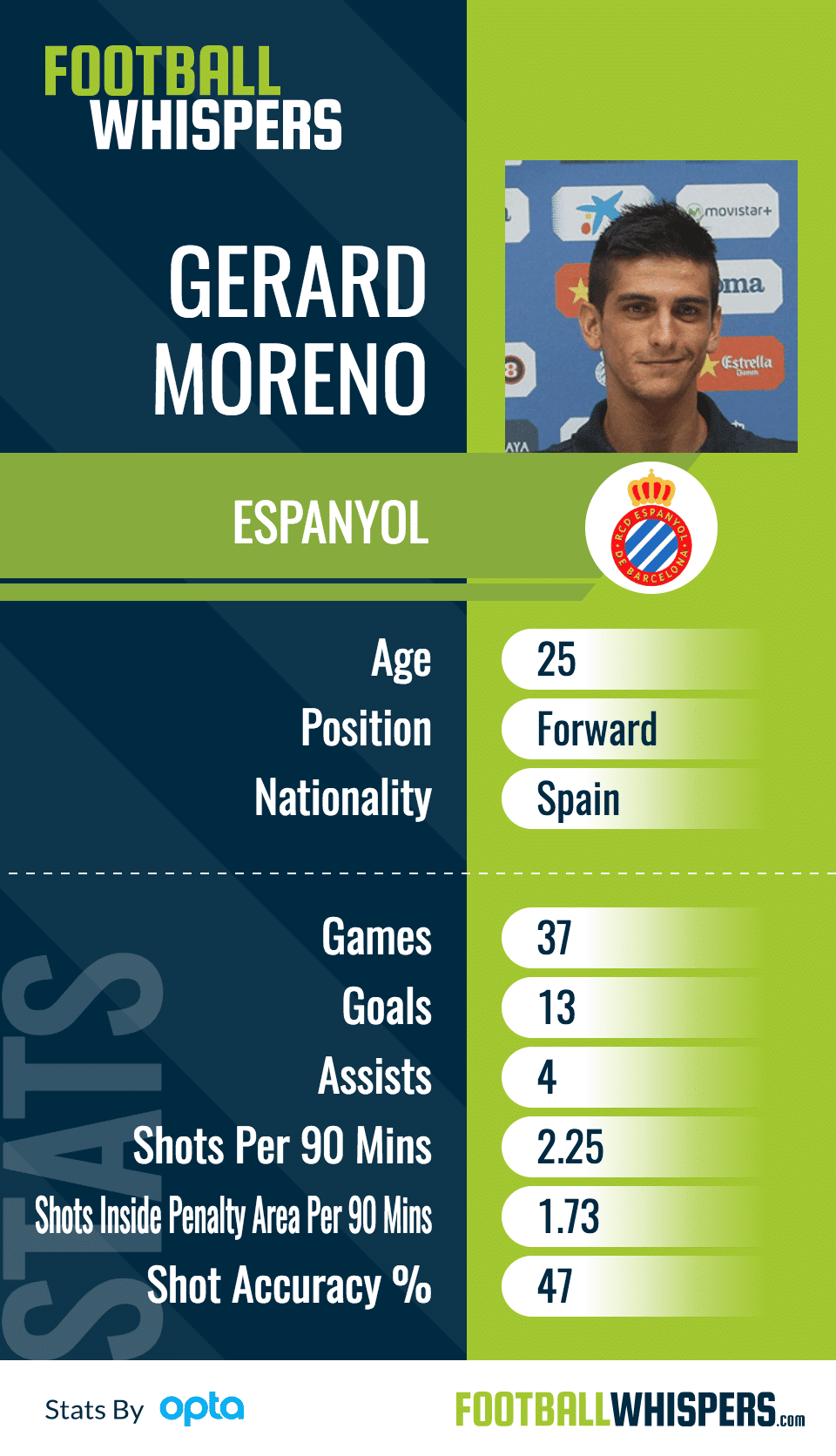 A total of 13 league goals may be a solid yet unsteady return for a striker, but Espanyol.

In fact, he was one of only three players who’s scored more than three La Liga goals for his side last season.

Like Enrich, The former Villarreal man definitely comes alive within the box – out of his 2.25 shots per 90 minutes average, 1.73 of them come from within the penalty area.

In fact all of his league goals last season came come from within the penalty area.

His shot accuracy at 47 per cent last season was slightly below Enrich's 51 per cent though.

For a team like West Bromwich Albion, who only managed 43 goals and their top striker was Salomon Rondón, who scored just eight times in the league, he would be ideal.

But the 25-year-old also be a good back-up option for a club at the top of the table, looking for a No.2 option behind their main man.

Whether he’d want to leave his current side is a different matter though – he did persuade Villarreal to let him go to Espanyol because he wanted to return to Catalonia.