Celtic completed the signing of Lewis Morgan on Friday, with the talented attacker immediately being loaned back to St Mirren for the remainder of the season. The 21-year-old could be the first of many youngsters arriving from other Scottish clubs if the champions are clever.

It's not the first time they've signed a player from a Scottish club and it won't be the last. For example, Jonny Hayes arrived from Aberdeen in the summer. However, his move came after an impressive season and, at 30 years old, he's not one for the future; he was considered to be one of the best of the rest. But perhaps Celtic should adopt a different approach moving forward.

The club should be targeting the best youngsters in the country. It's a move which would allow Brendan Rodgers to do what he's best at, which is developing players. Since his arrival in the Scottish Premiership he's improved a number of individuals.

The club recognise this is a USP of theirs and it's why they've tried to loan talent from Premier League clubs – Patrick Roberts has benefitted from his move up north. But does that really benefit Rodgers' side? They get a quality player in the short term but they're developing players for other teams because, more often than not, they'll be priced out of bringing them to Parkhead on a permanent basis.

The best approach for Celtic going forward would be to sign high-quality youngsters from Scottish clubs. They could develop them so that their squad is better but there's also more chance of selling them on to a Premier League club for a huge profit. It would be a long-term project but, with no real challengers in the Scottish Premier League, it's something they can afford to do.

With this in mind, we've taken a look at players aged 21 or under to identify those who are overperforming and could follow Morgan in joining the champions in the near future. A few caught the eye but only three really stood out. 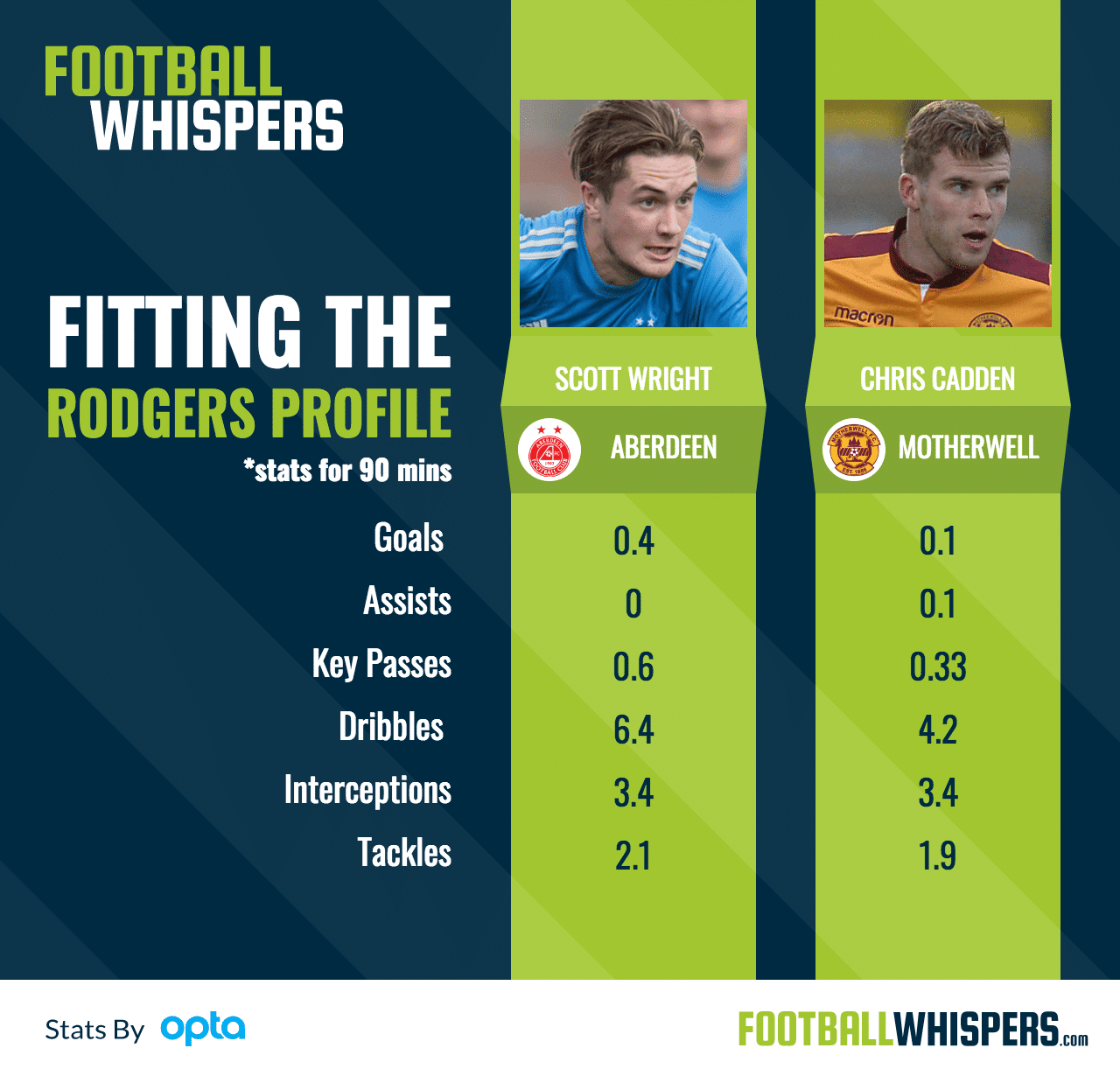 The 20-year-old Abderdeen winger is having his breakout season at Pittodrie. He plays primarily on the left flank, a position that belongs to Scott Sinclair at Celtic and one Morgan is capable of playing, but that shouldn't put the champions off.

Wright can also play on the right-hand side and Sinclair has played a central role at times this season. This gives Rodgers a number of options and allow him to develop Wright properly; he wouldn't just be thrust into the starting XI and expected to perform.

He's raw but the potential is obvious. Wright is explosively quick and can play with either foot, meaning he's capable of going inside or out. Though he's yet to register an assist this season, he is creative. This is highlighted by his key passes per 90 (0.6), which is the fourth highest in the Scottish Premiership.

Wright is direct and aggressive in his play, which goes a long way to explaining why he's completing 6.4 dribbles per 90 – the second-best in the league. He's the sort of attacker all defenders hate coming up against, and it doesn't matter what league you're playing in – just look at how destructive Ryan Fraser is for Bournemouth in the Premier League.

He's still a long way from the finished product defensively but Wright is learning, and his tackles and interceptions numbers show there's a lot to work with.

Another winger, Cadden plays on the right for Motherwell and his numbers, as shown in the graphic above, aren't too dissimilar to Wright's. However, at 6ft, he's not your stereotypical wide player and he has played as a right wing-back.

You could say that he has a playing profile which allows him to play as a right-back in a team that dominates possession. He'd suit the 3-5-2 shape Rodgers has used at times this term and his inclusion would allow the team to seamlessly change to a 4-3-3 or a 4-2-3-1 without substitutions.

Cadden's expected assists (xA) per 90 minutes this season is 0.27, which is the fourth-highest in the league. He's creating high quality chances and a team like Celtic could benefit from that.

A move for the pair could see the Bhoys allow James Forrest to leave the club and Ryan Christie, the 22-year-old winger on loan at Aberdeen, to continue his development elsewhere. 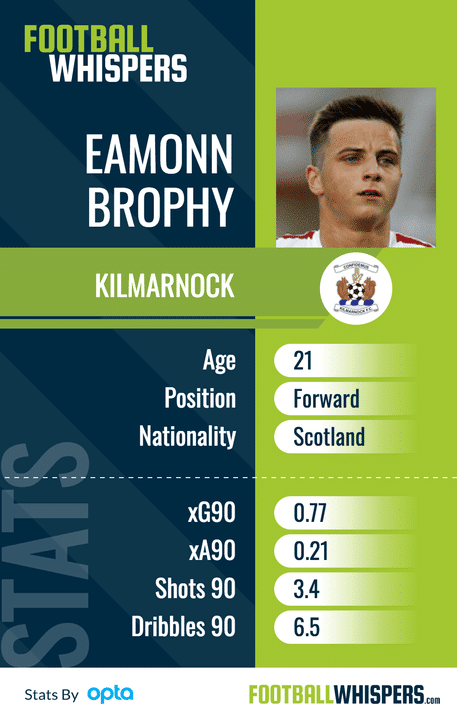 Moussa Dembélé and Leigh Griffiths are continuously linked with moves away from the club. Rodgers wouldn't sanction the sale of both, but losing one of them is a real possibility. Kilmarnock's 21-year-old striker could be the man to fill the void if one of the forwards at Parkhead does depart.

Brophy is having quite the season, though it is worth mentioning that he's played fewer than 700 minutes in the top flight this term. However, hiss expected goals (xG) per 90 minutes is higher than Dembélé's, and this is interesting because the French forward has played a similar amount of minutes to the striker nicknamed “The Wolf”.

The Kilmarnock forward is proving to be a bit of an all-rounder. He's averaging 6.5 dribbles per 90 minutes, the highest in the league, as well as 2.58 key passes – both Dembélé and Griffiths average 3.14 – all while playing in an inferior side.

The thought of Brophy playing under Rodgers is frightening. A new recruitment policy could see Celtic reap the rewards down the line. Not only that, the Scottish national team could benefit from it, too.