Tottenham Hotspur are yet to delve into the transfer market this summer. While rivals have been spending money as though it's going out of fashion, Spurs haven't broke from tradition and are looking to bide their time to get the best deals possible.

It did appear as though they would be bringing in Juan Foyth but Paris Saint-Germain have pushed their way to the front of that queue, and, according to Argentine midfielder Javier Pastore, are now favourites for his signature.

Mauricio Pochettino has reportedly asked Leicester City  to keep him in the loop with Riyad Mahrez's situation. Roma have seen a bid turned down for the Algerian and Arenal have so far refused to pay the Foxes valuation of £50million despite Arsené Wenger being a fan.

The player wants to move, though, and if he's still at the King Power Stadium in the final week of August you can almost guarantee a Daniel Levy special.

Likewise with Ross Barkley, Spurs are keen but the club refused to pay anywhere close to £50million for a player who has just the 12-months remaining on his current deal.

A new report by the Mirror clashes with earlier ones claiming they would wait until August to make their move. It is now thought the 23-year-old midfielder is a top target and Spurs want him at the club sooner rather than later – but are only prepared to pay £25million.

That one will no doubt rumble on. However, a more pressing issue for the team is finding a right-back to replace Kyle Walker. The 27-year-old moved to Manchester City in a deal thought to be worth £50-55million.

Kieran Trippier signed a new contract with the club and could start the season as the first-choice right-back, but Pochettino is a fan of having two quality players battling it out for the full-back positions.

Last season it was Walker and Trippier vying for the right-back berth while Ben Davies challenged Danny Rose for the position on the left. However, replacing Walker won' be that straightforward. The former Sheffield United man matured under the guidance of Pochettino into one of the best in the league.

He was accomplished playing both the right-back and the wing-back role. He was comfortable hugging the touchline and keeping the width but he could also operate in central areas if the play progressed in such a manner. Then, when in dangerous situations, he had the composure to keep his head in the sense he didn't just aimlessly put the ball into the penalty area but instead tried to pick a pass.

He was moulded into the ideal player for Spurs. With this in mind, we've taken a look at three players who could replace him.

Pereira has spent the last two seasons on loan at Nice. While playing in Ligue 1 he caught the eye of many and is in demand this summer. Tottenham’s head scout, Steve Hitchen, who is a specialist in French football, is thought to be a fan and one of the main reasons Spurs are in the race for him.

According to reports from Portuguese newspaper O Jogo (printed version; page 13), Spurs have made a formal offer of around €15 million (£13.2 million) which is way below Porto’s asking price.

Pereira has a release clause of £22million but Porto had previously indicated a willingness to sell at a lower price due to financial problems.

It was believed that they would accept closer to £16million but they’re now playing hardball in an attempt to hold out for the full release clause. Spurs, however, aren’t keen on this according to reports and will try to knock them down.

The Portuguese international can play in either full-back position, though he is stronger on the right side, as well as further forward on the flanks meaning he hits the brief.

He's a proactive defender which is backed up by his stats. He averaged slightly more interceptions than Walker (1.3 to 1.2) last season and came out in tackles won (2.9 to 2.2).

Both Walker and Pereira averaged 1.2 key passes demonstrating their influence on the attack and produced a similar amount of completed dribbles. The latter stat gives a good indication of the sort of player they are.

Of course, you don't want your full-back dribbling out of danger, but when they're in the final third it's an asset to have to beat a man.

Pereira, on paper, looks like the perfect man to replace Walker. If Levy isn't careful another club could enter the race and pay his release clause. 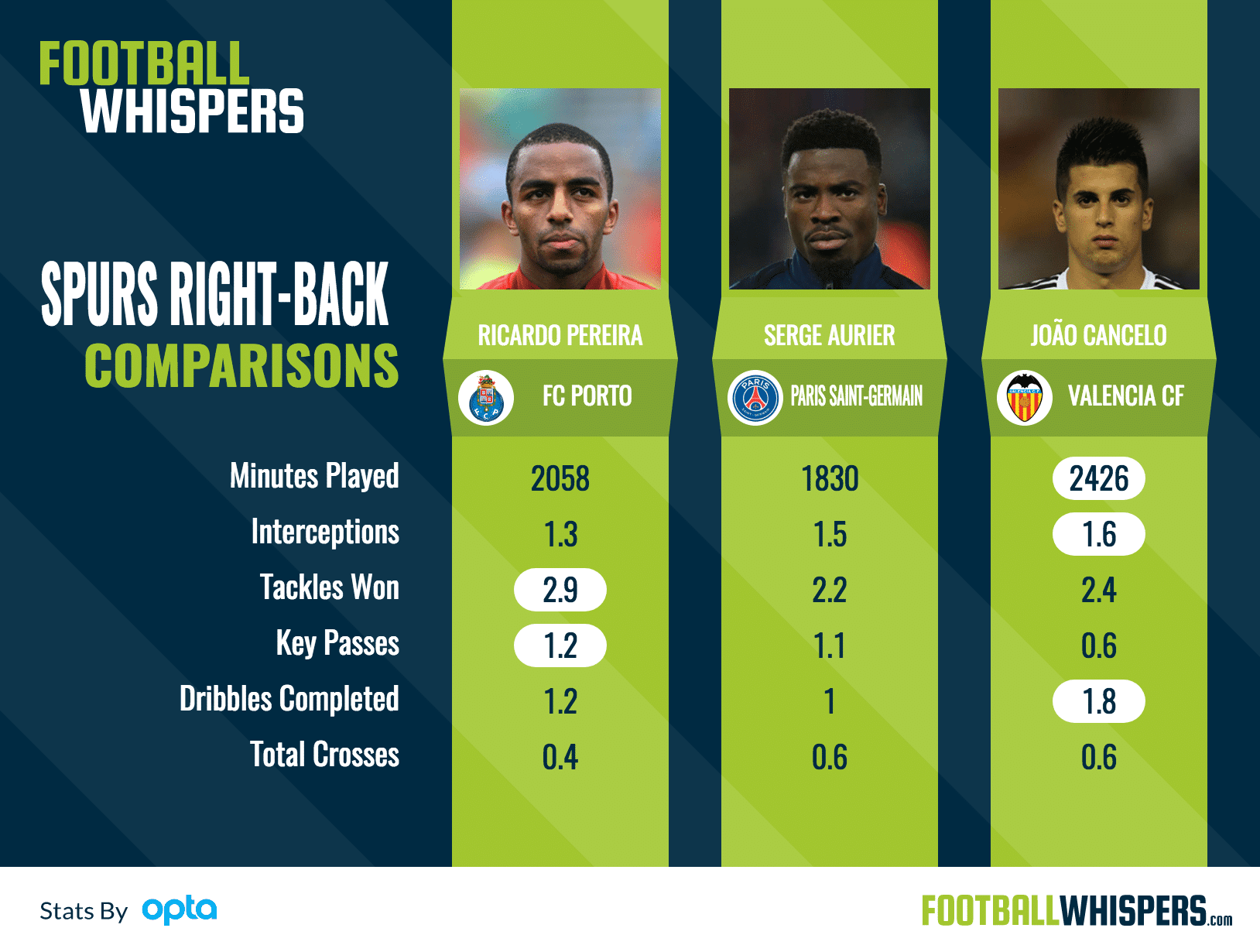 The Mirror claim Aurier is on the list of targets for Spurs. The Ivorian is open to a move with his playing time in Paris expected to take a hit after the arrival of Dani Alves.

He's a Manchester United transfer target too, with the Independent saying the Red Devils have shown an interest in him after negotiations with Monaco over Fabinho came to an abrupt halt.

José Mourinho would no doubt be able to offer Aurier better terms but Pochettino presents him with a platform to express himself, and this could be pivotal if it came down to a battle between the two clubs. His stats stack up, too.

It's all theoretical for now but for what Spurs need from their man on the right is exactly what Aurier can offer.

One interesting aspect to consider is the fact Aurier would arrive as a winner. He's won things with PSG and that winning mentality may rub off on the rest of the team.

With just two years remaining on his current deal he's available for £25million and could be a bargain.

Cancelo was once a Chelsea transfer target. He was heavily linked with a move to Stamford Bridge in January but it failed to materialise. The 23-year-old was then named as a top target for Barcelona as they searched the market for a long-term replacement for Dani Alves. But again, that didn't happen and Barcelona have since signed Nélson Semedo.

It gives Spurs a free run at the Portuguese international who is adept at playing anywhere down the right-hand side of the pitch. He's dangerous when in the final third but by no means neglects his defensive duties.

Deporte Valencianosuggest Valencia may consider selling Cancelo for €30million (£26million) to help finance the rebuild of their squad. It represents a great opportunity for a club to sign one of the most highly-rated full-backs in the world today.

Staggering when you consider Manchester City are going to spend over £130million on three of them this summer. All three would be great signings for Spurs and none of them would break the bank.