The transfer window kicked off with Liverpool fans being in an unfamiliar position of power. Champions League in the bag – albeit with two qualifying matches still to play – an endearing manager who could attract Europe’s best, Fenway Sports Group loosening the purse strings, two £70million-rated signings in their crosshairs and no rumblings of key players exiting Anfield.

But, as July seeps into August and the window of opportunity to piece together a squad capable of competing on all fronts nears a close, the tables have turned on Jurgen Klopp’s men.

The public pursuit of Virgil van Dijk came to an abrupt halt after Southampton alleged that Liverpool had tapped the player up. The Reds were forced to apologise and ended their interest in the Dutch defender.

However, there have been reports that they’re still keen on bringing him to Merseyside. after the player told the Saints he wants to leave this summer.

Despite such positives, we’re just a little over two weeks away from the new Premier League campaign kicking off and a deal for the Dutchman doesn’t appear to be any closer, at least not publicly.

Naby Keïta is another top Liverpool transfer target. The 22-year-old dynamic box-to-box midfielder was named as one as early as April. The Reds appeared confident of landing the former Red Bull Salzburg player despite his current club, RB Leipzig, claiming he wasn’t for sale at any cost.

The tale of Keïta and Liverpool has taken a few twists over the past month. Club record bids have been tabled and training sessions cancelled, but RB Leipzig’s director of football Ralf Rangnick is holding firm in his stance that the player won’t be swapping Germany for England during this window.

Dominic Solanke, Andrew Robertson and Mohamed Salah have all arrived to strengthen the squad but are those three signings really enough to ensure Liverpool have the depth to compete in Europe as well as domestically?

It’s doubtful and the longer the sagas surrounding van Dijk and Keïta last the closer the club edges into panic buying zone.

All bets are off and value for money quickly becomes even more of a myth. See Andy Carroll for details.

And, to make matters worse, a summer which started off so brightly now has a Philippe Coutinho shaped shadow hanging over it.

Barcelona have stepped up their long standing interest in Coutinho. The La Liga side have already had a £72million enquiry rejected by the Reds but, according to reports, are expected to return with improved terms as they scramble to fill the Neymar void if he leaves.

Klopp was adamant his playmaker wouldn't be sold when asked during the club’s pre-season tour of Hong Kong. But Sport, a Spanish publication, claim the Reds will accept £133million for their Brazilian maestro. It’s yet to be seen whether or not such a claim is empty or not.

If Barcelona come to the table with £100million would Fenway Sports Group be able to turn them away? Coutinho cost just £8.5million when he signed from Inter Milan back in January 2013.

There will no doubt be plans in place for his departure. One that’s felt inevitable since the 2013/14 season when he flourished in a centre-midfield role and announced himself as Andrés Iniesta's heir.

The club may still bring in Keïta and in a sense they would have replaced what Coutinho offers in a central midfield role. His slaloming runs, his positive style and his ability to execute a pass are all matched by the Guinean international.

He's not as polished as his Brazilian counterpart, yet.

Salah's already arrived but the Reds needed someone with his profile regardless of whether Coutinho left, meaning if their No.10 does head for the exit door, and Keïta arrives, they could well still be in the market for another attacker.

After all, Klopp needs depth. They may have numbers in that part of the pitch but quality trumps quantity. Saying Danny Ings, Divock Origi, Solanke and Ryan Kent can fill in on the left if Salah needs a break is all well and good but none of them are near Coutinho's level, and the team are inevitably weaker.

With this in mind, here are three players Liverpool, hypothetically armed with the money received for their Brazilian, could bring in to replace Coutinho. 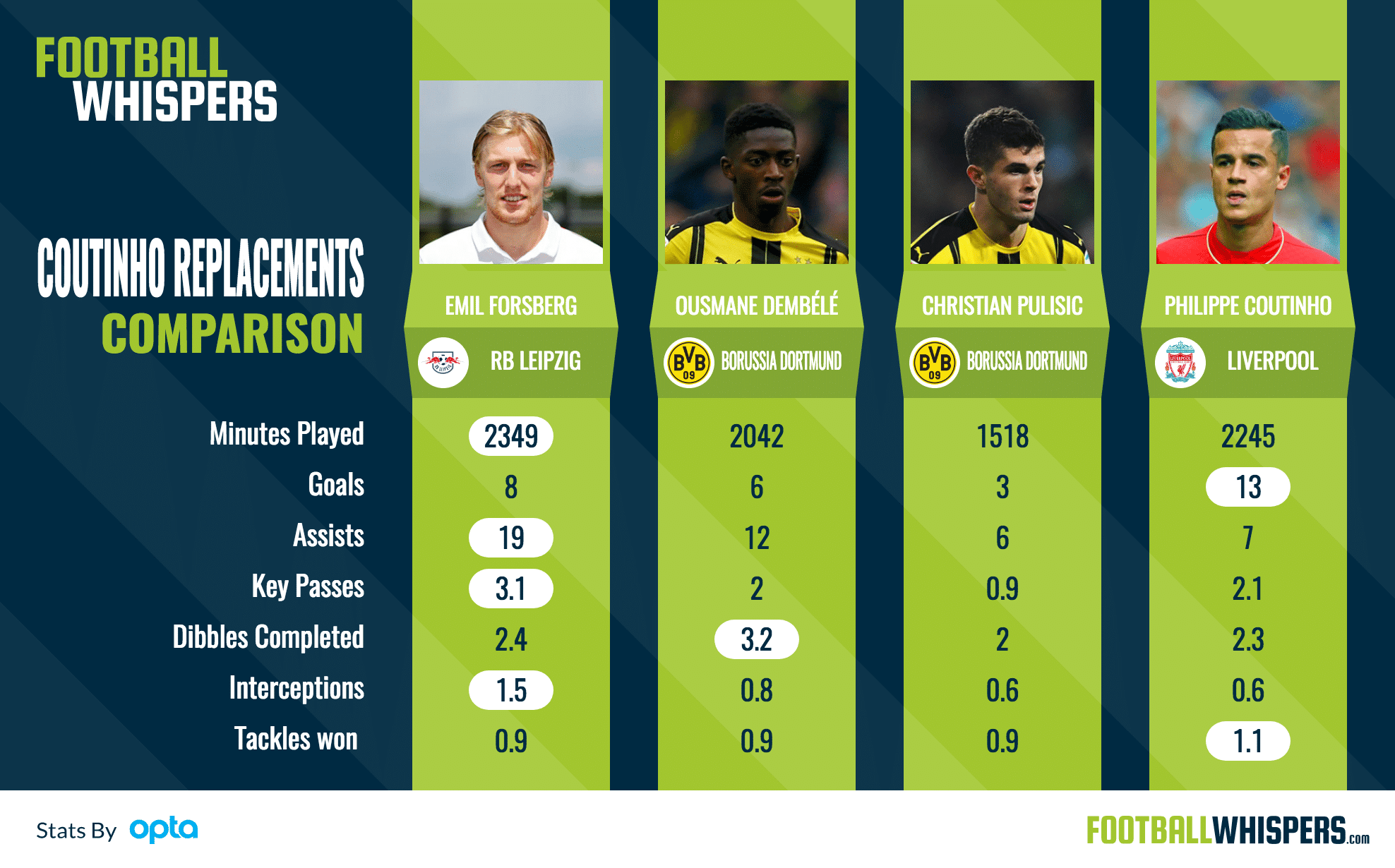 Courted by Liverpool before his move to Borussia Dortmund last summer, Dembélé has developed during his single season in Germany. So much so that he was linked with a move to Barcelona during this window.

He was viewed then by many as the man to replace Lionel Messi as the Argentine legend took up a more withdrawn position in the team. However, the hype surrounding the move has died down and with Neymar potentially heading to Paris the names on the lips of those who suppose Barça jump between Coutinho and Paulo Dybala.

The Frenchman is an outstanding talent and his rivalry with Kylian Mbappé, another Liverpool transfer target, could be this generations Messi and Cristiano Ronaldo.

He's frighteningly quick and the speed of his feet means he's able to bamboozle defenders. Despite his young age, he's not 21 until May, there's a maturity to his game in the final third and he has an end product, something so many lack these days.

He puts chances on a plate for his teammates. Of course, there are areas he could improve and there's a rawness to his game but that will improve with experience. A stumbling block for any potential move would be the playing time on offer.

He's going to want to be playing as much football as possible and Liverpool can't guarantee him that. Mané is a key fixture in the starting XI, Salah looks to have struck up an understanding with his teammates already and adds balance to the team with his left foot and Firmino is a firm Klopp favourite.

Pulisic has been on Liverpool's radar for quite some time now and the Reds had an £11million bid rejected by Borussia Dortmund last summer if reports are to be believed.

The American has since signed a new long-term deal with the Bundesliga club and the links to the 18-year-old died down.

Speaking in the April 2017 issue of FourFourTwo magazine, Pulisic says: “I have respect for Klopp and I know him – he was very welcoming to me here – but I was never really thinking about going to Liverpool. Borussia Dortmund have given me everything. If I work very hard here, I will play, and I love this club. I’m happy in the city, I’m just really content with everything here at the moment.”

Liverpool could revive their interest in the player this summer though for a number of reasons. Fenway Sports Group would undoubtedly love to bring Pulisic to the club, and not just for footballing reasons. He could be the poster boy for the club in America.

Klopp is a fan of what he can do on the pitch and could craft him into a Mario Götze/Marco Reus hybrid.

Thomas Tuchel, someone Pulisic was thought to be fond of, is no longer the manager at the Westfalenstadion and this could have an impact on the player's plans. And finally, unlike RB Leipzig, Dortmund are reasonable when it comes to parting with their players.

It's probably not the best idea to try and raid RB Leipzig for another player but the link to Forsberg has spanned a number of years now.

with the Bundesliga runners-up but reports continue to link him with a move away. Manchester United and AC Milan are thought to be interested in the Swedish playmaker and it’s easy to see why.

Forsberg has a number of strengths, and he shares similarities with Adam Lallana with regards to the way he moves the ball, his general tenacity and the pockets of space he manages to pick up.

However, it’s been said that the Swede is much more productive than his English counterpart.

In his debut season in the Bundesliga, the 25-year-old was involved in an astonishing 27 goals, including 19 assists. Forsberg is used to playing in a front four with RB Leipzig playing a similar system to great success this season as they shocked the league to finish second.

While he's effective he doesn't come with the reputation which would see him demand starting place in the first-team XI. His versatile means he can plug many positions, too.

While the Reds should do all they can to keep Coutinho, at least for another season, if he does leave there are players out there who could have a similar sort of impact on the team.