The summer transfer window of 2017 has been a mixed one thus far for Celtic. The new signings are positive – Olivier Ntcham is an exciting addition, Jonny Hayes has been a quality Scottish Premiership winger for many years, and Kundai Benyu already looks a bargain. On top of that, key players such as Moussa Dembélé, Stuart Armstrong and Jozo Šimunović have stayed with the club.

However, there are shortages in some key areas of the team that have already been made glaringly apparent.

The decision to play Nir Bitton at centre-back in the opening league game of the campaign highlighted a dearth of defensive cover, while Tom Rogic’s appearance up front in the Champions League clash with Rosenborg was an indication of the need for more striking options.

And yet Celtic’s greatest transfer saga of the summer doesn’t involve either of those areas. Indeed, the pursuit of Patrick Roberts represents something else entirely – the desire to bring back a talented young winger who enjoyed 18 superlative months at Parkhead.

The 20-year-old was one of the team’s most important creative influences during his prolonged loan spell. However, it is yet to be seen if he will be allowed to leave Manchester City for the Scottish champions on a permanent basis.

Reportedly, Roberts has let it be known that he is keen on a return to Celtic. But City aren’t sure another loan deal is what’s best for them or the player, especially with interest from the likes of Southampton and Nice.

However, even if the move doesn’t go through, Brendan Rodgers needn’t worry. There are viable alternatives out there. Here, we scout three of the best.

While Manchester City may not be keen to let Roberts go out on loan for another season, they may be more open to the idea of Diaz departing on a temporary basis. The 18-year-old has caught the eye with his pre-season performances, but may struggle to break beyond the likes of David and Bernardo Silva in 2017/18.

With this in mind, a loan move could work out nicely for the youngster, giving him an opportunity to shine in competitive action and hone his skills further before returning to stake a claim for a starting berth in Pep Guardiola’s team. And Celtic would be wise to consider the player for a number of reasons.

The most obvious reason is to repeat something that has proven to be effective. Roberts joined the club with game time in mind, and he returned a better player with a shot at a place in Manchester City’s squad. Diaz is at a similar stage in his career.

Another reason is that the Spaniard is also extremely similar from a stylistic and tactical perspective. He is a left-footer who prefers to cut inside from the right wing, possesses outstanding close control and the ability to beat his man.

Such is his technique, Diaz is completely unfazed by the prospect of operating in small spaces or being tracked by multiple markers. He isn’t a conventional winger, but then neither was Roberts.

He’d give Rodgers real incision in the final third, upping Celtic’s attacking output. And, considering he would be another loan deal, he’d come without a transfer fee. 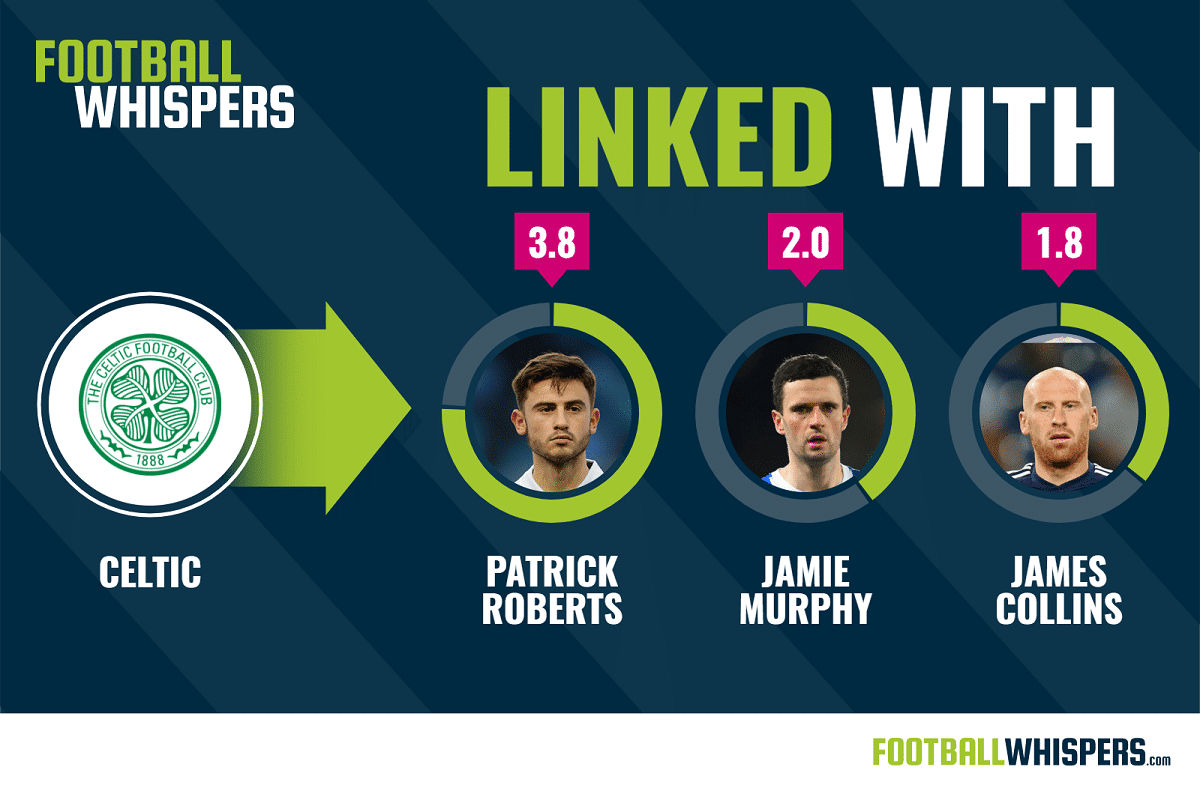 As a boy, Snodgrass supported Celtic. He went to games and even trained with the club before joining Livingston’s youth academy. “The first thing I remember was going up to Celtic Park to watch Celtic, feeling the full effect of the stadium. When you see the players on the park for the first time, you get sucked in and it’s like a dream,” he said.

“I trained at Celtic when I was a kid. I used to train at Rangers as well. I wore my Celtic shorts underneath my Rangers shorts when I trained there!”

From Livingston, Snodgrass ventured to English football with Leeds United, helping the Yorkshire club back into the Championship. Since then he has enjoyed spells with Norwich City, Hull City and West Ham United.

However, the Scotsman’s move to London in January hasn’t quite worked out. In 15 Premier League appearances since joining the Hammers, he has failed to score and has set up just two goals. This form has led to rumours of another move this summer.

Turning 30 years of age in September, Snodgrass is a far more experienced player than Roberts. But, with a silky touch and a precise left foot, he isn’t entirely dissimilar. He would revel in the Scottish Premiership and has admitted in the past that he would take a pay cut to join Celtic.

Walker may be a Rangers target, but if Celtic are to look around domestically for attacking midfielders that they could sign as alternatives to Roberts, the Heart of Midlothian man is the only one they are likely to find that fits the bill.

The 24-year-old has found himself sidelined at Tynecastle in recent weeks, with his form having dropped of late. As a consequence, he missed out on his team’s 4-1 defeat at Parkhead on the opening day of the Scottish Premiership campaign. But all of this has more to do with the uncertainty surrounding his future than any lack of quality.

Indeed, he is arguably the best attacking midfielder in Scotland today not to already play for the champions. He would represent a coup for almost any British club outside of the Premier League due to his creativity, intelligent movement and crisp passing.

His links to Rangers may not appeal to the fans, but Celtic haven’t been put off before by such circumstances – for evidence, just look at Scott Allan.