Joining one of the world’s most polarising clubs for a record fee meant that, no matter what he did out on the pitch, Paul Pogba was always going to receive a disproportionate amount of criticism.

Since the Frenchman moved back to Manchester United from Juventus for £89million last summer he has enjoyed a period of several months of fine form, only to experience a downturn in recent weeks, leading to questions of whether the Red Devils should be getting more of a return from their significant outlay.

There is no doubt about Pogba’s immense talent and, despite the constant reports to the contrary, he has been one of United most consistent and creative performers this term. Indeed, none of his team-mates can better the 50 chances he has created in the Premier League this term or the 1600 passes he has completed.

Were José Mourinho’s men not so wasteful in front of goal – they currently rank 19th in the division for chance conversion – the Frenchman would likely have hit double figures for assists already.

However, not all of the criticism is unjustified. At 23, Pogba still has plenty of room for development and there are certain areas of his game which, if he is to fulfil his potential and become the best midfielder in the world, he must work to improve.

One of the main knocks on Pogba this season is that he hasn’t scored enough goals. With seven in all competitions, the 44-cap Les Bleus star could quite conceivably match the 10-goal return his mustered for Juventus last term, but there is no doubt that he has missed some pretty routine chances at times.

No Premier League player has struck the woodwork more often than Pogba (eight) this season. Many of these efforts have been shots from distance of free-kicks, although he has struck the crossbar with a couple of close range headers that really should have been scored.

But more damning are the one-on-one chances that Pogba has missed, such as the shot he dragged wide of the post in the opening exchanges of the 1-1 draw with Liverpool at Old Trafford, or the mis-timed snapshot he scuffed in the dying minutes against Bournemouth last week.

It is perhaps an attribute that is refined and developed with experience, through the repetition of dealing with such high-pressure situations, but Pogba must iron out this small chink in his armour in order to become more efficient.

It isn’t and probably never will be his strong suit, but Pogba’s defensive positioning – or lack thereof – is a concern to many.

It has been well-documented that the 23-year-old prefers to play on the left of a midfield three with a shuttling runner alongside him and a dedicated defensive midfielder sweeping up behind. This is how he thrived in Turin thanks to the lack of defensive responsibility it demanded of him.

Yet, at times this season Mourinho has asked Pogba to play as part of a double pivot in a 4-2-3-1 formation. Whether or not the Portuguese coach should be sending out his star player in a sub-optimum position is an argument for another time, but if and when the Frenchman is asked to play this role, he needs to be much more cognisant of opposing midfielders running in behind him.

There is perhaps a misconception over what kind of player many fans perceive Pogba to be. It seems as though most expect him to be able to dictate play from midfield and drive his team forward like Roy Keane or Patrick Vieira, or even control the tempo of a match in the way that Xavi used to for Barcelona or Luka Modric does for Real Madrid. 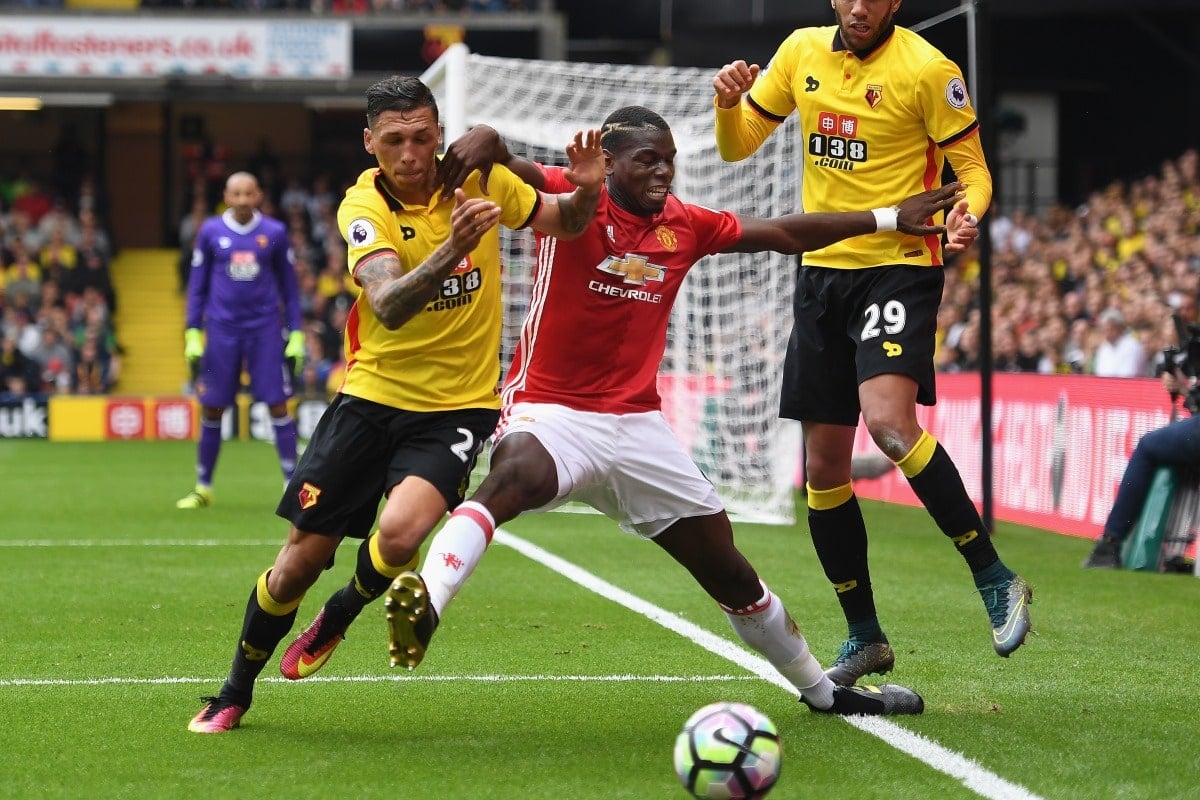 But at Juve, Pogba did neither. He was more of an advanced playmaker, flitting in and out of games and weaving his creating patterns with moments of inspiration in high areas. In this respect he bears more stylistic resemblance to Zinedine Zidane or Rui Costa.

However, if he hopes to become a more complete midfielder, and if he is going to be played in a deeper role on a regular basis, his defensive instincts need to be improved.

Many observers will not deem Pogba a success at United until he has fully exerted his influence on a high-profile fixture.

The exorbitant fee the Red Devils forked out to bring the former Le Havre youngster back to Old Trafford is regularly used as a stick to beat him with when he underperforms against top opposition.

Of course the fee is nothing to do with Pogba, but it does seem as though he is almost trying too hard to impress in big games, and ends up falling flat invariably.

Again, the game against Liverpool in January is a perfect example. Heading into the match at the Theatre of Dreams, United were in fine fettle and, having just had a Twitter hashtag created in his honour, Pogba was expected to shine.

However, the Frenchman produced perhaps his worst display to date in a United shirt, giving away a penalty, missing a key chance and struggling to get into the game throughout. 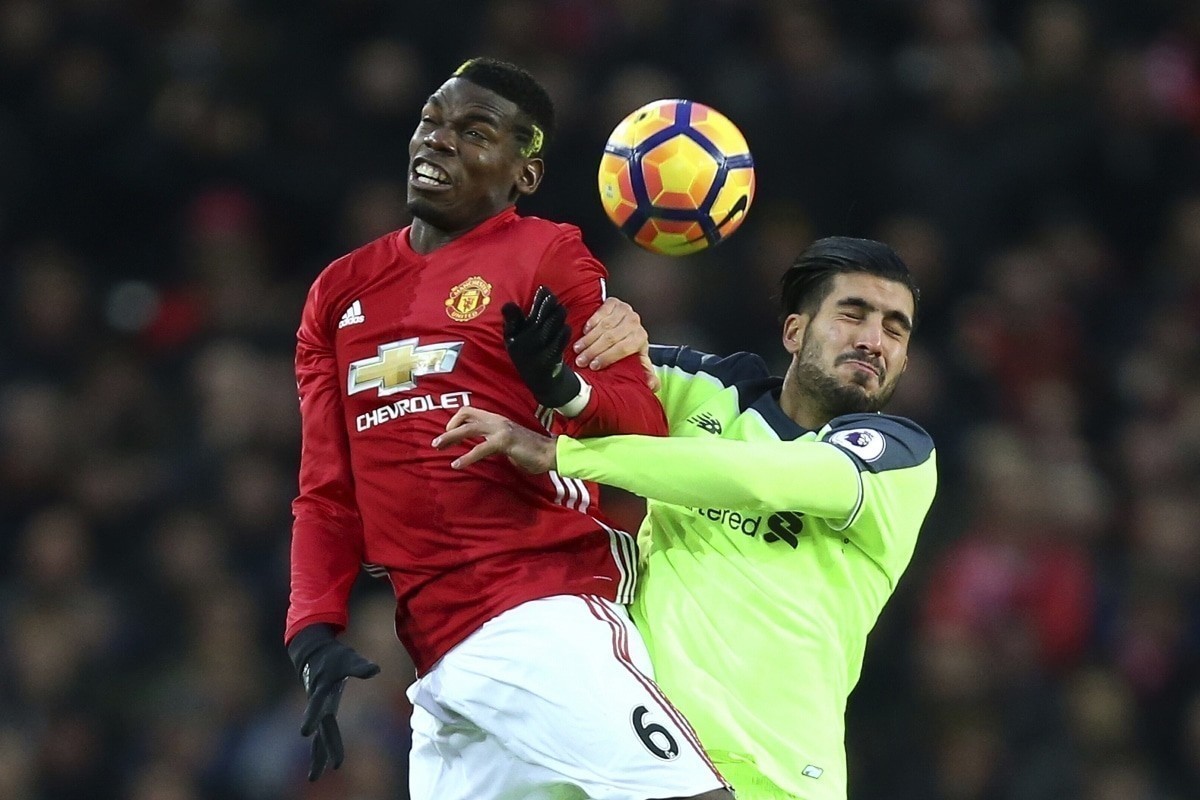 Pogba’s performance against the Reds was reminiscent of Ronaldinho’s disappointing Champions League final for Barcelona against Arsenal in 2006. The Brazilian was the undisputed best player in the world at the time and most expected him to be at his other-worldly best against the Gunners, marking his coronation at the highest level before heading off to the World Cup with Brazil.

But the iconic No.10 looked more concerned with making the game “his final” by doing something memorable rather than concentrating of what was best for his team. As such, he was anonymous for most of the match and, it could be argued, never got back to his impervious best after that.

Pogba still doesn’t look at home in high-pressure games. And, at 23, that is entirely forgivable. But there will come a time when he is required to stand up and produce in such encounters if he is to be considered one of the best in the world in his position.

Pogba is still a young player and has played an incredible amount of football over the last two years, with a Serie A-winning campaign running straight into the European Championships last summer.

What’s more, thanks to the drawn-out transfer saga that took him back to Manchester, he didn’t have a pre-season and is reaching the tail end of a campaign without a winter break for the first time in his career. He looks fatigued and, if you are reasonable, you will understand why.

Pogba experienced a slow start to his second coming at United as he adapted to his new surroundings, then he found his feet and showed his class for a sustained period either side of the new year. Now, he has suffered a drop-off in form and must call upon all his energy reserves get back to his best.

The world’s most expensive player will always be under the spotlight and Pogba will be judged harshly this season no matter what happens. But next season and the years that follow will be when his United legacy is defined.

His potential is sky high and he’s well on his way to fulfilling it. With the right guidance, there’s no reason why Pogba can’t become the best creative midfielder in the world.