They may have missed out on a top four spot and Champions League football for the first time in Arsène Wenger’s reign, but hope came in the form of a new-look system.

Towards the end of the campaign, Arsenal played a rough 3-4-3 that wasn’t dissimilar to that used so effectively by Chelsea. The change in shape was responsible for the upturn in form. As a consequence, they retained the back three going into 2017/18.

But it all went a bit wrong at Liverpool, with the defence getting no protection in the first half as they went 2-0 down, before switching to four at the back and conceding another two

Here, Football Whispers runs the rule over three centre-backs that could strengthen the Gunners’ defensive line before the transfer window closes.

Rewind one year and Boateng was widely hailed as one of the finest central defenders in world football. Today, however, there’s no guarantee he will even start at club level.

What A Save (Jerome Boateng) Germany Vs Ukraine… by marchellekhf

The Germany international’s spot at Bayern Munich is under threat, with Mats Hummels and Javi Martínez joined by Niklas Süle from Hoffenheim. This, along with manager Carlo Ancelotti’s preference for a back four, means that four centre-backs are now competing for two spaces.

Boateng made just ten starts in his team’s successful 2016/17 Bundesliga campaign. However, he wasn’t helped in his pursuit of game time by a succession of injuries. Indeed, even on the final day of the campaign he was forced off early on with a thigh problem.

“The season was anything but nice and successful for me,” he admitted to Sky. “It was difficult because at no time was I at 100 percent fitness.”

But, while his time as a Bayern regular may be up, Boateng has the qualities in possession to suit many other top European sides, Arsenal included.

His laser-like penetrative passing through pressure and comfort on the ball would be suited to the Gunners’ style of play.

The only concern would be that he failed to settle in the Premier League during his brief time at Manchester City several years ago.

Middlesbrough went down despite possessing one of the best defences in the Premier League’s bottom half last term, conceding just 53 goals in 38 games. Gibson was pivotal to their defensive performance, putting in some remarkably consistent displays in his maiden campaign at the highest level.

On the face of it, the 24-year-old is a classic English centre-back: he’s tall, he’s powerful, and he’s fairly straightforward in his approach.

However, the 6ft 1in behemoth has also shown signs that he has what it takes to play for a team more used to retaining and utilising ball possession than breaking it up.

The full extent of his passing range remains questionable in the main because Middlesbrough’s style of play wasn’t particularly complex at the back in the build-up phase, but Gibson generally evidenced an ease on the ball and a willingness to play incisive passes.

The left-footer could bring strength, aerial dominance and simple but effective passing to the left-sided role in Arsenal’s backline, and it’s worth noting the player’s own comments regarding his future following his current team’s relegation.

“I think every player wants to play at the top level,” he said. “I'm no different to that.”

RB Leipzig may have captured the imagination of many neutrals following their ascendancy to second place in the Bundesliga, but Hoffenheim were perhaps the real surprise story of 2016/17.

The team managed by 30-year-old Julian Nagelsmann qualified for the Champions League through a fourth-place finish.

That finish came in large part down to the organisation imbued within them by the coach, as they let in the second-fewest amount of goals in the entire league behind only Bayern. At the heart of this, quite literally, was Vogt.

The 25-year-old is naturally a defensive midfielder, but was converted to a central defensive role by Nagelsmann that saw him play in the middle of a back three alongside the aforementioned Süle and Benjamin Hübner. 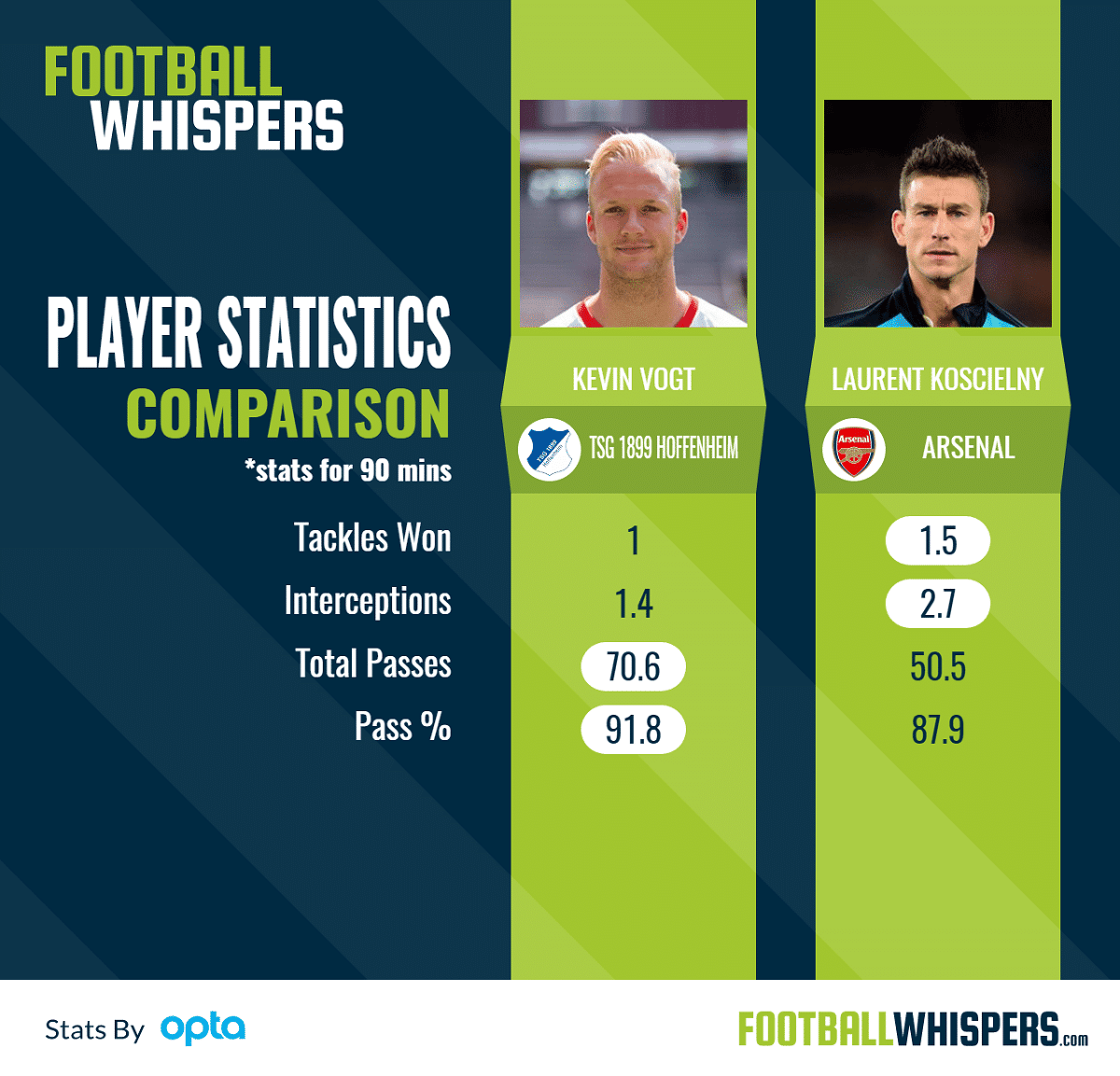 He was a revelation in the new position, with his technique and intelligence proving integral to Hoffenheim’s savvy circulation of the ball.

Comfortable under pressure and able to pass well over short and long range, Vogt could be just the type of player Arsenal need to kick-start their possession game this season.